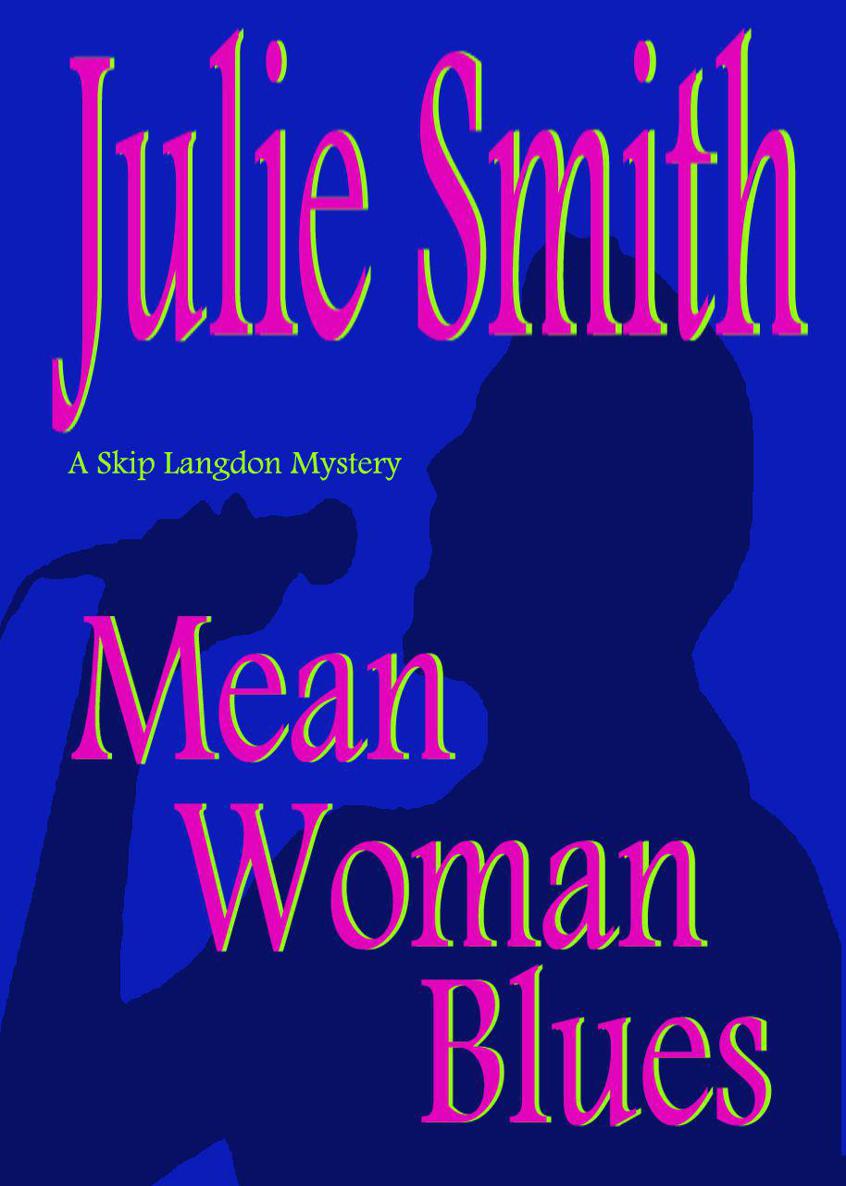 “What would a hot, sweltering August night be without a little Julie Smith to liven things up? … Smith makes fast work of Skip’s latest (and one of her greatest) adventures. So duck the termites, dodge the bullets, and beat the heat.
Mean Woman Blues
is Julie Smith at her most fun and lethal.”

“Julie Smith is able to surprise the readers with many unexpected twists and turns. This is one of the best police procedurals of the year.”

This is a work of fiction. All the characters and events portrayed in this book are fictitious or are used fictitiously.

May is the cruelest month.

September has its moments, being hurricane season, but its meanness is unreliable. May is a sure thing.

On Mother’s Day, give or take a week or so, the Formosans swarm, only slightly less consistent than the swallows at Capistrano. They continue their inexorable flight, sometimes in terrifying indoor clouds, well into summer.

Formosan termites, accidentally imported some years ago, are eating the city of New Orleans. They are doing it not in bug-sized nibbles, but in greedy gulps that some people say they can actually hear. They swear that in the dark of night, as they lie awake kissing their investments good-bye, they can hear the buzz of so many tiny saws, mandibles chomping their floorboards.

Perhaps they are merely blessed with good imaginations, but a visitor who arrives in the merry month, strolls a few blocks, and finds himself wearing a vest of termites may be inclined to credit them.

The unsuspecting stay-at-home finds himself in a fifties sci-fi film. It begins with a single bug. It may fall on his clothing or perhaps the desk upon which he’s writing. He brushes it off, and another falls, like an earwig from the eaves of a porch. He looks up and sees a few winged creatures bouncing off the chandelier. Odd, he thinks, and goes back to his reverie. And soon there are more bugs. And more. And more. The room may fill with them, thick shrouds of them, circling, diving, turning the air into a seething dark mass.

It may seem the sensible thing to run screaming for cover, but in fact there is an easier way: Our hero can simply turn off the light, and they will leave or die. Or he can just wait, if he can stand it. The winged ones, the alates, or breeders, have about a two-hour life span, between seven and nine KM, usually. Unless, of course, they manage to mate, in which case they will start a nest. The largest nest found to date had a diameter of three hundred feet.

Unlike other termites, these can build aerial nests, right in your walls. Brick or stucco houses are fine with them; they’ll eat the door frames, windowsills, picture frames, furniture, and telephone bills, plus your favorite hundred-year-old shade tree.

Louisiana has the most severe infestation in the world, and it is only natural that the bug has become, like the
loup-garou
(or Cajun werewolf), part of the local mythology.

The stories are legend: An alfresco wedding attacked by something resembling a Biblical plague. A window shut just in time, as hundreds of tiny bodies, drawn by the light inside, smash as if on a windshield. An ordinary backyard, covered in minutes by a carpet of termites. Fat garbage bags of wings, as many as ten or twelve, shoveled from the floor of a house.

Indeed, the month of May affords a brush with nature rarely seen by urban dwellers. Those of a metaphorical bent try not to think about the Mother’s Day aspect.

Detective Skip Langdon, a veteran of many Mays in New Orleans, was trying to help her beloved through his first, mostly with diversionary tactics. She had seen Steve Steinman’s face when he discovered the termite launching pads on his newly purchased, newly painted, hundred-and-twenty-year-old ceiling. He looked as if someone had died.

“Am I insured for this?” he said, and she desperately wished there were something she could do. The insurance companies weren’t that dumb.

“Why didn’t they find them when they inspected?” he asked, outraged.

“You can’t know they’re there unless you rip out the walls.”

“Uh-oh. I’ve got a bad feeling that means I’ve got to do that now.”

“Maybe you won’t. They can probably drill holes for the poison.” But she was lying. They might well have to rip out the walls.

No exterminator would be available for weeks, of course, and it’s said the Formosans can go through a floorboard in a month. The thing to do was keep his mind off it.

JazzFest was over, and the heaviness of summer was nearly upon them; Mother’s Day brunch at a fine old restaurant sounded like a prison sentence. Yet Skip was a mother of sorts, or at least an aunt to the adopted children of her landlord, Jimmy Dee Scoggin. Dee-Dee was gay, and his partner, Layne Bilderback, had recently joined the household shared by Jimmy Dee and young Kenny and Sheila Ritter, the offspring of his late sister.

Dee-Dee wheedled. “We have to do something to remember their mother, keep the feminine spirit alive. Isn’t it the decent thing?”

Steve said, “How about a hike?” and Dee-Dee countered, “Don’t you get enough wildlife at home?”

But Skip pounced on it. If Steve wanted it, she wanted it. She wanted him in a good mood about Louisiana. He had moved there recently and restored a house (the one being gnawed), after months and years of thinking about it. A documentary filmmaker and film editor, he’d lived in California the entire time he and Skip had been dating. Their long-distance relationship had deepened on proximity. Skip was getting comfortable and liking it a lot. Steve had come to New Orleans for her, and his being there had enriched her life so much more than she’d anticipated that she felt responsible now. And motivated— eager to make him happy. A walk in Jean Lafitte Park, over in Jefferson Parish, ought to be wonderfully therapeutic.

There was almost a no-go when Jimmy Dee said they’d have to leave the dogs behind— Steve’s shepherd, Napoleon, and the kids’ mutt, Angel— because they couldn’t go in the park itself and it was too hot to leave them in the car.

But in the end the three kids— Dee-Dee’s two and Steve— rose above it.

And to Skip, the day was so beautiful, the views so tranquil, the natural mix so seemingly harmonious that it was possible to forget unharmonious nature: weed against weed, man against bug, cop against thug. She could forget her enemy.

Afterward, they went home and barbecued. While Layne cooked, the other grown-ups sat in the courtyard Skip shared with the Ritter-Scoggin family, drinking gin and tonics while the kids watched television, Napoleon snoozed, and Angel tried to wake him up. The air was velvety, with a little breeze, and the mosquitoes weren’t yet biting. It was absurdly familial. Skip was completely, deliciously happy, a feeling she sometimes distrusted.

But that night she dreamed, and the dream was like life. In the dream, she had a beautiful house, and then a tiny hole appeared in the wall; out of the hole came swirling hordes of termites, traveling in vortexes like tornadoes. More and more swarmed until the air turned black, and then there was no air, only chaotic, moving, living walls, trapping her and invading her nose, her ears, smothering, strangling…

Steve shook her awake, and she told him the dream, still moaning, shivering though it was late spring, unnerved out of all proportion.

“They aren’t that bad,” he said. “It’ll be okay. But thank you for your empathy.”

The dream wasn’t about his termites. Someone could have said it was about him, about her fear of their relationship, her dread of becoming engulfed. But she knew it wasn’t that. She knew what it was about, and she knew why she couldn’t stop shaking.

It was about fear of dropping her guard, of looking away for even a second, of forgetting the danger that always lurked.

She had been happy too long, and something was happening to wake her up, to alert her to be wary. Yet the task was impossible. She couldn’t be wary every second of the day. She couldn’t protect even herself, let alone those she loved. No wonder she had dreamed of a pulsating monster, a force of nature that overwhelmed and smothered.

Nearly two years ago, Errol Jacomine had disappeared, but he would not stay gone. She knew this; she had destroyed two of his careers, twice thwarted his attempts to win control over his fellow human beings, to gain a following, and to dominate. He would be back, and he would try to kill her sooner rather than later. To forget it for a day in the woods, for an evening in her courtyard, for a moment, for a millisecond, was dangerous and possibly deadly.

Jacomine’s son, Daniel, had been arrested, charged with half a dozen crimes, and eventually convicted of murder as the result of one of Jacomine’s schemes. He was due to be sentenced in a couple of days.

How that would affect his father Skip couldn’t know, but it had probably precipitated the dream. Jacomine might not even notice, perhaps having written Daniel off. He could do this; he seemed sometimes to have no feelings.

On the other hand, he perceived himself to be at the center of the universe. He might feel proprietary toward Daniel, no matter how unlikely he was to have true paternal feelings. And if he did, he might… what?

Treat it as an occasion to make himself known. Trade an eye for an eye: kidnap Steve and demand Daniel.

That was what the dream was about.

She left for work feeling hunted and resentful of her psyche for rubbing her nose in it. She knew all that, and what could she do about it?
Exactly what?
she asked herself angrily. Later, the dream seemed more a premonition than a warning.

That morning, as always, she walked the few blocks to the garage where she kept her car, pointed the remote at the automatic door (a process that never failed to give her childlike pleasure), and waited for the door to raise itself high enough to allow her ingress. Instead of the familiar rumble, an explosion ripped through the quiet morning, followed by a loud
ping
, like a beer can hitting a metal drum.

She was aware of an arm around her waist, another at her back, and then she felt herself falling, a great weight upon her. She tried to fight it, but it was too heavy. She was helpless. Her head hit the pavement.

It took a second to put it together. The explosion had been a shot, the
ping
a ricochet.

Another shot blasted the momentary peace, a second bullet thunked into the sidewalk. Closer. She felt her muscles contract involuntarily, seeking shelter.

She heard a woman scream, and she held her breath, but a shocked hush had enveloped the corner.