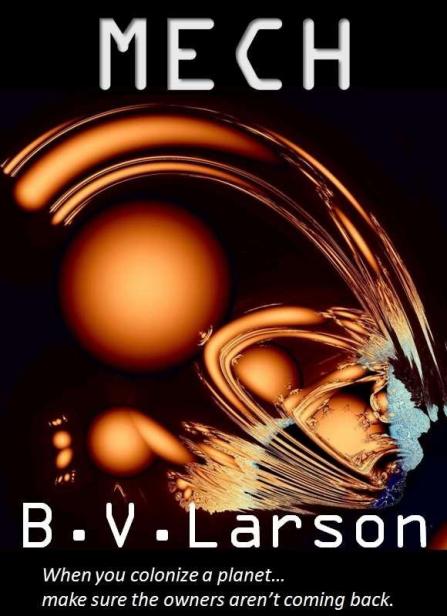 Books by B. V. Larson

This book is licensed for your personal enjoyment only. This ebook may not be sold or given away to other people. If you would like to share this book with another person, please purchase an additional copy for each person you share it with. If you’re reading this book (not just the sample) and did not purchase it, please purchase your own legal copy. Thank you for respecting the hard work of this author.

This book is a work of fiction. Names, characters, places and incidents are either products of the author’s imagination or used fictitiously. Any resemblance to actual events, locales or persons, living or dead, is entirely coincidental. All rights reserved. No part of this publication can be reproduced or transmitted in any form or by any means, without permission in writing from the author.

“And if you gaze for long into an abyss, the abyss gazes also into you.”
- Friedrich Nietzsche

Three huge shadows slid through the interstellar oceans at the speed of light. As silent as space itself the seedships glided toward a bright K-class star. They were bound for their Homeworld, the fifth planet in the system. Unfortunately, that planet had long ago been blasted to rubble. A dense asteroid belt now orbited in its place.

A few million kilometers from disaster, the ancient navigational organics finally came online and discovered that communications were out with the Homeworld’s long-dead traffic control. After many millennia in the void the organics had grown slipshod in following procedures. Rather than engaging the emergency subroutines, a stored virtual model of the Homeworld was used to set the course. At a leisurely pace, the ship began thawing the crews.

Unaware of their doom, the Parents twitched feebly within their icy chambers, slowly reanimating. On full automatic, all three seedships sailed into the asteroid belt, maneuvering to orbit a planet that no longer existed.

The youngest of the three Parents was the first to awaken. She knew immediately that something had gone wrong. The task force had passed the designated revival point six months ago, and now the ships were rapidly closing on the Homeworld unchallenged. She rose painfully out of her encasement, extended a pod for the first time after eons of cryo-sleep, and attempted to alert her sisters. Soon, more of her sensory organs began functioning and she was able to comprehend the data the ship was trying to feed her.

Despair bubbled through the Parent. The entire task force was doomed. They were about to collide with a mammoth, rapidly spinning asteroid and none of the others were awake enough to avoid destruction. With great effort, she engaged the override and commanded the ship to evade, to ignore its navigational software and switch to auto-defense. Immediately, the vessel swerved and jerked, wrenching the young Parent’s delicate birth-chambers and half-thawed ovaries. Hideous agony ripped through her, but it was nothing compared to the pain she felt for the others as their ships sailed serenely onward.

White pinpoints blossomed upon the surface of the asteroid. Mountain peaks twirled by her ship and barreled away into the void. She was alone.

Assuming she was in hostile territory, the Parent suppressed the ship’s energy emissions and reflections to avoid detection. She let the ship coast through the asteroid belt and on toward the inner planets without applying further thrust. Her swollen organs shuddered with relief as she dumped liberal doses of hormones into her bloodstream. Feeling less stressed she began analyzing the data from the passive sensors and played back stored records from the datapods.

Within minutes she had a new objective. The fourth planet out from the home star had a hotter climate than the Homeworld, but was still habitable. It had been used as a breeding ground for livestock. Now, however, the sensors reported that it was in the hands of unrecognized aliens. Judging by their space vehicles and radio emissions, these aliens seemed technologically advanced, and possibly were the minions of the ancient hated enemy, the Tulk.

Incredibly, the Homeworld itself was gone. She could detect no sign in the modern universe that the Imperium had ever existed. It was possible that she was the only survivor, the last in the universe capable of bearing offspring, the final hope of her race. She thought of the Homeworld, once the center of a vast interstellar empire. Thousands of black starships, the gloaming skyreefs, the air-swimmers soaring over the cliffs of the Grand Abyss—all were gone.

Watching and listening to the nearby aliens, she knew hate. Despite the calming effect of the hormones, she fairly shook with emotion. Here were the destroyers! Applying only the most minute and undetectable jets of thrust, she guided her ship toward the fourth planet. The key to the success of her mission would be absolute surprise combined with blinding speed of attack.

Her mission was clear. The Imperium would be avenged.

The
Gladius
slid into a stationary orbit over Garm’s southern continent. A thousand modules swung majestically around the ship’s central torus like a spinning cluster of stars. Sitting in one of the more luxurious modules was the Captain of the
Gladius
and the new Planetary Governor of Garm, Lucas Droad.

“You’ve been in this system on several occasions, Captain. Can you tell me something of Garm that isn’t in the brochures?” asked Lucas.

“There’s not much to say. You know, of course, that Garm was colonized some four centuries ago by German and Chinese separatists from Old Earth. A watermoon named Gopus orbits Garm and is inhabited, although very sparsely. If anything, Gopus is even more inhospitable and uninviting than Garm. On both planets the climate is exceedingly hot and the people exceedingly primitive,” said the overweight Captain with a shrug. He stirred the cup of tea that sat on his belly.

“I take it you prefer the more sterile and civilized environment of the habitats. The holo-brochures say that Garm is a wild and untamed planet with unspoiled natural beauty.”

The Captain pursed his thick lips. “Any thinking man would prefer the high ground. Holo-walls can simulate more stunning vistas than nature can provide. The greatest dream of most dirt-huggers is to scrape enough cash together to retire to a luxury hab.”

“But there are no large habitats in this system.”

“Certainly not, there is precious little luxury of any kind. Garm is greatly isolated and hence technologically and culturally backward. In short, I find the planet repulsive.”

“I see you wear the drab native clothing,” commented the Captain off-handedly.

“No sense in being overly conspicuous,” said Lucas with a smile. He glanced down at his black gauzy smock and tight pantaloons. An overcoat of dark fur with a matching double-peaked hat hung near the doors. “I find that bankers feel more at ease when facing an inspector from the Cluster Nexus if he at least dresses as they do.”

The Captain chuckled, causing the teacup on his belly to bounce. “A bank inspector? Is that what you’re supposed to be?”

“For as long as necessary.”

“The only place on Garm a man needs such heavy clothing would be near the pole,” commented the Captain. “More tea?”

“No, thank you,” said Lucas. He frowned into the cooling liquid in his cup, then glanced up to see that the Captain watched him. He took a tiny sip, then put the cup down on the table. “I find the attire suitable. It’s midwinter now and it’s quite cold this season all the way down to the Slipape Counties, I’m told.”

“I see, you don’t wish to say where you’re headed,” said the Captain, nodding. “Of course. Well, I won’t keep you any longer.”

“Perhaps we’ll meet on the surface at a later date.”

The Captain blew out his thick cheeks, setting down his tea as well. “It’s unlikely that I will get down to the surface during this trip. My duties are up here with the ship.”

They clasped hands. The two men smiled cordially while Lucas slipped the credit vouchers into the Captain’s sweating palm. The Captain’s smile broadened. He nodded and tucked a flimsy molecular datastrip into Lucas’s hand in return. Then Lucas left, heading straight for the docking tube. As soon as the Captain was out of sight he unobtrusively wiped the other man’s sweat from his hands onto his pantaloons.

There was no one at Grunstein Interplanetary to meet the new Planetary Governor. He rode the miles-long jet-tube down from orbit and arrived without fanfare. His typical Garmish clothing made him resemble the local populace and in-system traffic more than the new immigrants who had been his travel companions on the journey out from Neu Schweitz. He blended easily, only his greater than average height and weight distinguishing him from the crowd. A flood of traders swept by, tycoons from the Slipape Counties and the foodstuffs people from Gopus.

He pulled his Garmish hat down over his head more snugly, enjoying the unaccustomed feel of the fur against his skin. He moved with the crowd that flowed from the jet-tube gates down to the customs area. Once there, he separated from the crowd and approached the exit for official personnel. He ran his ID card through the machine, touched his thumbprint to a lit-up pad and focused his gaze on the optical sensor
so that his retina could be scanned. Instantly recognized and catalogued, the steel doors shunted open and he was allowed to pass by the customs area without the routine body search. Tourists and businessmen from around the system gave him speculative appraisals as he passed them by, his single bag rubbing against his legs as he walked. The other immigrants from the
Gladius
shuffled along dazedly, ignoring him.

He stepped out of the foot-traffic that flowed relentlessly toward the exits to put on his coat. While he stood there he watched a very large man bypass the security just as he had. This man was a giant, one of the more common forms of genetic specialization. The giant approached and stood next to him. Standing just over eight feet tall, he also wore furs and carried his luggage with him.

Lucas stretched his aching shoulders. “It’s good to feel the solid pull of a planet under my feet again after three years of cryo-sleep. I know we only aged a few months on board the
Gladius
during the long flight out from Neu Schweitz, but I’m convinced that I still feel those years somehow, deep down in my bones.”

Jarmo’s eyes never stopped scanning the crowd. One by one, he located the security devices and appraised them expertly. “We are under surveillance, but I see no reason why we shouldn’t move to the hotel immediately.”

The Governor nodded and rode his way up the slider to the nearest waiting cab. As he climbed in, the giant appeared at the exit, smoothly folding his body into the cab immediately behind him.

“There he is,” said Militia General Ari Steinbach in a hushed voice.

Mai Lee inclined her head a fraction, the equivalent of a nod. Linked directly to the security feed from the spaceport, Mai Lee of New Manchuria stared at Lucas Droad speculatively. “I’m an excellent judge of character, General.”

“I don’t like this man. There is no softness in him, no weak button to push.”

“Well, it certainly hasn’t shown up in his classified files, or in our psychological simulations, or even in the darkest secrets of his past, which are few and far between,” said Steinbach.