Read Meet Me in the Moon Room Online 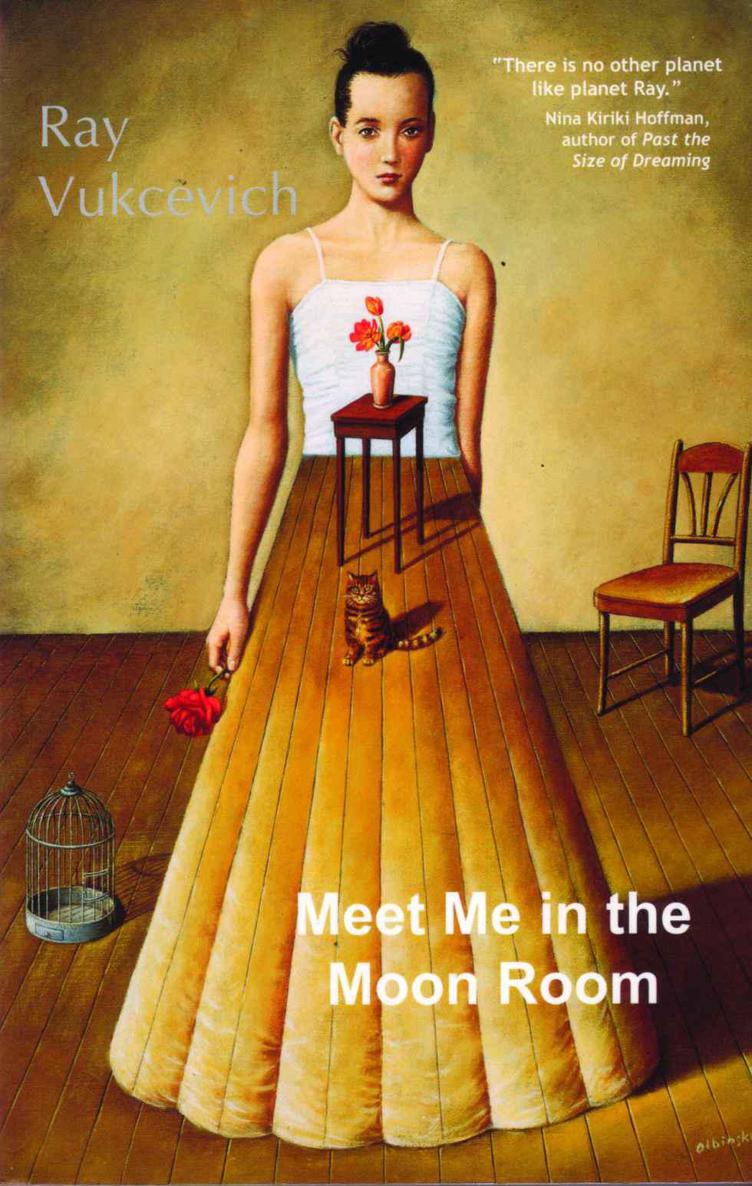 By the Time We Get to Uranus

Message in a Fish

We Kill a Bicycle

The Next Best Thing

What other writer could make you start laughing halfway down the first page of a story about a man putting on a sweater? Thurber maybe, a long time ago. Buy this book.

These stories cannot be compared to anyone else’s. There is no one in the same class as Ray Vukcevich. The stories are uniquely, splendidly, brilliantly original, a surprise in each and every one, and brimming with wit and laugh-out-loud humor. A stunning collection.

In Ray Vukcevich’s ingenious stories the absurd and the profound are seamlessly joined through fine writing.
Meet Me in the Moon Room
is a first-rate collection.

—Jeffrey Ford, author of
The Girl in the Glass

I once heard Ray Vukcevich say about life, humanity, and writing, “All we have is each other.” In the spaces between us lie some very strange territories, and this is the ground Ray explores in his stories. There is no other planet like planet Ray; once you visit, you’ll want to go back as often as you can. In
Meet Me in the Moon Room
, you get an explosion of guided tours. Grab the bowl with the barking goldfish in it, wind the cat, curl up in a comfortable chair in an abandoned missile silo, and plunge into the wild mind of Ray Vukcevich. No one else can take you on this trip.

—Nina Kiriki Hoffman, author of
Past the Size of Dreaming

Ray Vukcevich is a marvelous writer. His perspective is skewed, giving us a whole new take on the world. His use of language is unique. And, perhaps most delightful of all, is that Vukcevich stories are completely unpredictable. I envy the person who will be reading Ray Vukcevich for the very first time.

This is a work of fiction. All characters and events portrayed in this book are either fictitious or used fictitiously.

Meet me in the moon room / Ray Vukcevich

By the Time We Get to Uranus

M
olly had come down with suit in the springtime. What had been a rare and puzzling skin condition a year ago was now an epidemic. People developed space suits, and then they floated off the planet. They usually grabbed whatever stuff was nearby as they left. Molly and Jack weren’t much concerned with a cure; there would be no cure for years, if ever. Too late. Sooner or later Jack would be suiting up himself, and that was the problem they were having such trouble talking about. They’d both be going, but they wouldn’t be going together.

Jack didn’t think Molly’s overshoes were fooling anyone. The suit always started with your feet. Everyone knew that. People see a pretty blond woman in a loose red, green, and yellow flowered blouse and big rubber galoshes, they know her skin’s got to be going silver, turning to suit, could be halfway up to her butt, you couldn’t tell with those relaxed fit jeans she’s wearing.

“Everyone’s looking at me,” Molly said. “I feel like I’m wearing clown shoes.”

“No they aren’t,” Jack said. A lie. “Why don’t you sit down here, and I’ll go see what we have to do about getting on the plane.”

They were flying out of LAX on the way home from a visit with her mother. Molly had told him she needed the trip to say good-bye to everyone else she loved. It had been hard, but they’d done it, and now they were going home to Oregon. Jack came back with the boarding passes and sat down beside her.

“Everyone was gray,” she said.

“Mom,” she said. “You. The neighbors. Everyone. The color of fear is gray. You all try not to show it.” She squeezed his hand.

He didn’t know what to say. Maybe everyone had been gray. Maybe in some strange way it was the best they could do in sympathy with Molly who was turning silver from the ground up.

She turned her head away, but not before he saw the slow tears. He leaned in and kissed her on the cheek.

She gave him a weak smile and hugged her canvas bag to her chest. She’d taken one of her father’s miniature locomotives, Ol’ Engine Number Nine. She’d spent so many happy childhood hours watching her father’s trains go around and around and listening to his stories. Molly had been in college when he died. Her mother had left the trains as they were—the track and station and all the little people and cows and, of course, the box cars and locomotives, the Pullman cars, the dining cars, flatbeds and tank cars. The setup was like a shrine, and it embarrassed them both a little, but neither suggested they should box the trains up and put them in storage.

Now Molly would take her favorite locomotive with her when she left the planet.

Boarding for flight 967 to Portland was announced. First class first and folks with babies. Or if you’re willing to admit you need some help. They waited.

Then they got on, and he took the window seat. Molly would want to get up. They sat silently waiting for takeoff. He wished she’d look through the in-flight magazine. He wished he could think of something funny or cheerful to say. He looked out the window. They took off.

Flying high in the sunshine at last, Jack saw a wondrous sight, but stopped himself before he could point it out to her—a flock of people in space suits rising up through the smog. They looked as if they’d all been tossed out of a bar together. Tumbling, rolling, twisting. Some hugging their knees. Others stretched out in that optimistic flying superhero posture you so often saw on TV. Others turning head over heels. Cartwheels. And one couple holding hands. How had they managed that?

Oh, look, he almost said, but remembered instead the last flock they’d seen rising. The three of them, Molly, her mother Beth, and Jack, had been drinking ice tea in the glass box that was Beth’s balcony overlooking downtown Tarzana. None of them saying much. Being gray, he supposed. Then suited figures rose from somewhere in the urban jumble below. He could see they were not all taking off from the same spot, but they roughly converged without touching before they got very high.

“Why do you suppose that happens?” he asked.

“The way they always seem to come together as they leave,” Jack said. “You always see groups.”

“Actually, if you watch long enough,” Beth said, “you see lots of them going alone.” She glanced over at Molly, who Jack could now tell from her rigid posture and the red flush around her ears had been paying attention after all. Beth took her hand. “I’m sorry, sweetie.”

“There’s got to be some way to delay it,” Jack said. Maybe if they just got it out in the open. How could you solve a problem if you couldn’t even talk about it? “Some way for you to wait for me.”

“There was this thing on prisoners, Jack,” Beth said. “On TV.”

“Well, when it’s time for them to go, you know, leave this Earth, they have to let them out.”

“What happens if they don’t let them out?”

Beth looked away. “You don’t want to know.”

Molly threw her napkin down on the table. “That’s just it,” she said. “He really does want to know. Everything about this whole business interests him deeply.” She pushed away from the table and hurried back inside.

And now on the plane home he watched the flock of suited figures until the plane moved above and beyond them. “Maybe we could stay higher than you need to be until I can catch up,” he said.

“What do you mean?” She didn’t turn her head to look at him.

“I mean we could hire a plane and fly really high, higher than you’ll need to be while I catch up.”

“Right.” She rolled her head toward him and gave him a tired look. “Maybe we can get the air force to refuel us.” She turned away again.

Okay, it was a stupid idea. He was slowly learning to keep his ideas to himself until he’d ironed the wrinkles out of them, but it wasn’t easy. Way back when their marriage was young, he’d told her one of the things that made him so crazy in love with her was that he felt free to say stupid things to her. Losing that was hard.

They had gotten rid of Sparky the golden retriever because they were afraid he would jump up on Molly and tear her suit. It would have been nice to come home and be greeted by the animal who had never really been anything but a big puppy. The doghouse with the long lead they’d hooked Sparky to when they got tired of him jumping up on the French doors, begging to get in, remained in the backyard.

At the kitchen table with his morning coffee, Jack looked out at the doghouse and leash and thought that he should move them to the garage, but he thought that every morning. Molly sat in her furry pink robe, slouched over a bowl of cereal. He didn’t think she was really eating it.

He picked up the paper again. “Hey, listen to this,” he said. “Blah blah blah and on the question of why you get air and pressure and temperature control, not to mention food, water, and waste disposal, the answer is that the good stuff comes from one parallel universe and the bad stuff gets dumped into another.”

“I like the one about how we’re the cheap fish that God put on Earth to condition the tank,” Molly said, “and now we’re being pulled off so he can put in a more exotic and interesting species.”

Jack lowered the paper. “You really don’t care how it all works, do you.”

The last time they’d made love, he had joked and called her Barbarella in her silver thigh-high boots. She hit him and laughed, hugged him and cried softly on his chest.

Okay, so how about this? Jack is entirely in his head now, discussing his new idea with a mental construct that looks just like today’s Molly, but listens like the old Molly. He might even be asleep at his desk where he was still going over sources on suiting when she wandered off to bed.

We make a small cut. Who knows what’s under there? Don’t you want to know? If it’s really skin, it’ll heal. It won’t hurt. You said so yourself.

That’s another thing, he says, just how do you, how do we, well, take a leak in space?

All the comforts of home, Jack.

Maybe I’ll make the cut when I have a suit of my own.

Just a little cut. There just above your knee.

Bright red blood rises from the razor-sharp slice in the silver fabric.