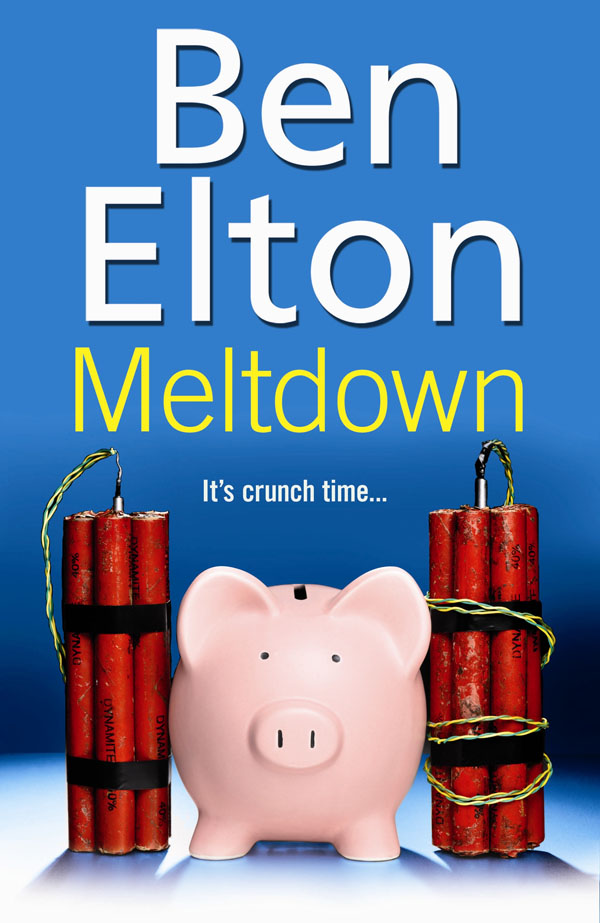 TRANSWORLD PUBLISHERS
61–63 Uxbridge Road, London W5 5SA
A Random House Group Company
www.rbooks.co.uk
First published in Great Britain
in 2009 by Bantam Press
an imprint of Transworld Publishers
Copyright © Ben Elton 2009
Ben Elton has asserted his right under the Copyright, Designs and Patents Act 1988 to be identified as the author of this work.
This book is a work of fiction and, except in the case of historical fact, any resemblance to actual persons, living or dead, is purely coincidental.
A CIP catalogue record for this book is available from the British Library.
ISBNs 9780593061923 (cased)
9780593061930 (tpb)
This book is sold subject to the condition that it shall not, by way of trade or otherwise, be lent, resold, hired out, or otherwise circulated without the publisher’s prior consent in any form of binding or cover other than that in which it is published and without a similar condition, including this condition, being imposed on the subsequent purchaser.
Addresses for Random House Group Ltd companies outside the UK can be found at:
www.randomhouse.co.uk
The Random House Group Ltd Reg. No. 954009
The Random House Group Limited supports The Forest Stewardship Council (FSC), the leading international forest-certification organization.
All our titles that are printed on Greenpeace-approved FSC-certified paper carry the FSC logo. Our paper procurement policy can be found at
www.rbooks.co.uk/environment
Typeset in 11.5/15.5 Sabon by
Falcon Oast Graphic Art Ltd.
Printed and bound in Great Britain by
CPI Mackays, Chatham, ME5 8TD
2 4 6 8 10 9 7 5 3 1
About the Author
Ben Elton
is one of Britain’s most provocative and entertaining writers. He has written twelve bestselling novels which include
Stark
,
Popcorn
(Crime Writers’ Association Gold Dagger Award),
Dead Famous
,
High Society
(WHSmith People’s Choice Award),
Past Mortem
(Prix Polar International),
Chart Throb
and
The First Casualty
.
His multi-award-winning TV writing and performance credits include
The Young Ones
,
Blackadder 2
,
3
and
4
,
Mr Bean
,
Saturday Live
,
The Man from Auntie
and
The Thin Blue Line
. He has written several smash-hit West End plays, including the Olivier Award-winning
Popcorn
, and the books for the hit musicals
The Beautiful Game
and the global phenomenon
We Will Rock You
, which he also directs.
Ben is also one of the country’s most popular and influential stand-up comedians. He is married with three children.
Also by Ben Elton
Stark
Gridlock
This Other Eden
Popcorn
Blast from the Past
Inconceivable
Dead Famous
High Society
Past Mortem
The First Casualty
Chart Throb
Blind Faith

Good and thick
Jimmy Corby graduated from Sussex in 1993. He celebrated with five friends: Rupert, David, Henry, Robbo and Lizzie.
These six were to remain friends throughout the nineties and for most of the noughties.
Mates. Proper mates.
Through good and bad.
Through thick and thin.
Except that there never really was any bad.
And there wasn’t an awful lot of thin either.
Apart from Rupert’s Amanda. And Henry’s Jane. And David’s Laura. They were all very thin. But by choice.
Good and thick. That’s how the times had been.
Jimmy and his friends stuck together through good and thick.
Tired and broke
Jimmy scarcely noticed being tired any more; it had become as much a part of his life as eating or breathing. Of course he’d been tired sometimes in his old life. His fantasy life.
Seriously knackered
, or so in his innocence he had believed. When shouting himself hoarse during an allnighter with the Tokyo Exchange or pissed up at 5am in a pub with some of the guys, watching a live fight from Vegas. Or enjoying his second straight dawn, loved up on a beach in Ibiza with a bottle of Krug between his knees and a gap-year holiday-hippy chick on either side. Yes. He’d been tired. But not
really
tired. Tired to his core, tired in his
blood
. Tired to the point where he doubted his sanity. Tired until his mind dislocated itself from his body and just sort of floated a few feet above it as he went through the motions of being alive.
These days that was how tired Jimmy felt
all the time
. And there would be no respite, not for years.
He could hear the screaming long before he opened the front door. The screaming never seemed to stop. They could have recorded his life and used it as the soundtrack for a slasher movie. Both of the younger ones had clearly gone off at the same time and were competing to see who could drive their mother insane first. Jimmy knew exactly the sort of night that awaited him. Because it would be the same as last night. And the night before. The same as every night since that tearful moment when Jodie, the rock, the treasure, the person without whom they simply
could not do
, had left.
Jimmy thought about taking a last turn round the block. Of grabbing a few moments more of stumbling, agonized, half-conscious, semi-zombieficated peace before entering the maelstrom that was his home (or the bank’s home since he had been forced to mortgage his entire equity in a failed effort to get on top of his mounting debts). But Jimmy was an honourable bloke. He loved Monica. He might have failed her utterly like the sad swine that he was, but he loved her and he knew she needed him, if only to give her three minutes’ respite to pop to the loo.
One by one he unlocked the four beautifully tooled Chubb deadlocks set perfectly along the rich, shiny edge of the huge bright-red front door of which he had once been so proud. Despite its great weight the door swung open smoothly. Of course it did, it was so expertly hung. Hung on its
eight
big brass hinges. Such a full, heavy, clunkingly satisfying movement. A Romanian guy had done it; they still understood wood in Eastern Europe. Jimmy had admired the guy at the time but now he envied him. He envied him so much. To have a
trade
. To be able to actually
do
something. A real, palpable, physical skill that you could offer for hire. How good would that be? Particularly now that the market for aggressive, cocky wankers shouting themselves hoarse into a telephone had so comprehensively dried up.
The marble-clad hall was empty, of course. Empty and echoing as the red door shooshed and clunked shut behind him. No welcoming cocktail served by a lovely, eager, semi-posh girl with a degree in Fine Food and Catering, fresh-faced, chef-coated and anxious to explain the details of that evening’s menu.
‘Hi, Jimmy. Cool day? Wicked. Hope you’re in the mood for Chinese duck? I’ve been marinating it since two and my black bean sauce is awesome.’
No. That was history. Jessica had gone the way of Jodie. Her fabulous catering and hospitality skills were now being wasted at a Garfunkel’s while she searched for a new private chef’s position, along with all the other drifting Jessicas for whom the supply of mega-rich employers was so rapidly shrinking.
She was gone and the big marble hall was empty and cold. The only thing in it besides Jimmy was screams. Bloodcurdling, brain-mashing, life-sapping screams.
The volume ramped up massively as, head bowed with exhaustion, he made his way down into the basement. As he went, he noted that only one of the little lights that had once glowed so subtly beneath the thick frosted glass of the stairs was still working. How long had Monica agonized over the lighting? It had seemed so important at the time. She had had a pile of catalogues and magazines. A
pile
. All devoted exclusively to internal lighting.
Now there was just a single working bulb left. One by one the others had all gone out. Monica would probably see it as a metaphor for their vanished hopes and dreams. Or was it a simile? Jimmy wasn’t sure; he wasn’t bright that way, like Monica.

Scandalous Desires by Hoyt, Elizabeth
4 Impression of Bones by Melanie Jackson
The Scarlatti Inheritance by Robert Ludlum
Deadly Reunion by Elisabeth Crabtree
Memories of Midnight by Sidney Sheldon
Gaining Visibility by Pamela Hearon
The Death Trust by David Rollins
Love Finds You in North Pole, Alaska by Loree Lough
Hush Money by Robert B. Parker
It Had to Be Him by Tamra Baumann
Our partner