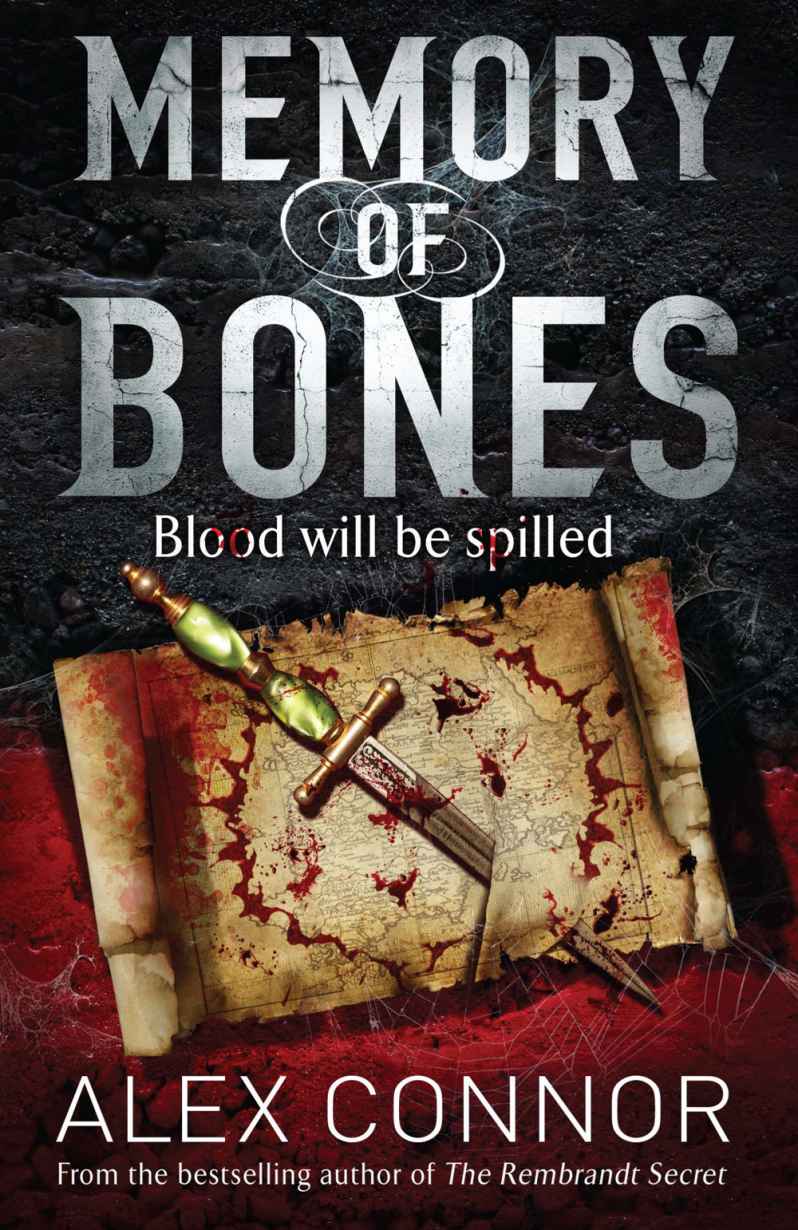 Any member of educational institutions wishing to photocopy part or all of the work for classroom use or anthology should send inquiries to Permissions c/o Quercus Publishing Inc., 31 West 57th Street, 6th Floor, New York, NY 10019, or to
[email protected]
.

ALEX CONNOR is also known as Alexandra Connor and she has written a number of historical novels. This is her third crime thriller. She is an artist, and this book features her own reproductions of Goya’s Black Paintings. Alex is regularly featured on television and BBC radio. She lives in East Sussex.

Floating on the water at the edge of the canal, hardly visible, was a bundle, wrapped tightly in a soiled white blanket. It was small, benign, but eerie. Gently, it glided away and began its grisly procession down the middle of the canal, on an almost imperceptible current. Transfixed, they watched its progress, the bundle finally passing under the full glare of one of the restaurant’s outside lamps. The beam illuminated the blood-spattered wrapping – and the place where the parcel had come partially untied.

From which a disembodied hand, fingers outstretched, clawed its way to the light.

Under a horned moon, two figures paused. It was past one in the morning in the cemetery, on a humid, early summer night, when even the insomniacs of the town were restlessly asleep. Both men knew that if they were caught they would be jailed. Grave-robbing, especially the plundering of the crypt of an important man, could result in a long imprisonment. Or worse
.

Impatiently, the older man began to shuffle his feet, his companion breaking open the seal into the crypt. Together they entered, ivy leaves brushing against their faces as they hurried in. Shutting the door behind them, the younger man immediately lit an oil lamp
.

‘
It’s here,’ he said, holding up the light to illuminate the crypt
.

The interior was dark and clammy with damp, the smell of mould oppressive as the man shone the light around the chamber. In the centre stood a large stone casket with a sealed lid, a mottled spider casting an intricate web over the lock, the lamplight flashing on the sticky threads. Without speaking, the man reached
for his hammer and then brought it down violently, smashing the seal of the tomb
.

Pushing at the stone, they strained to move the weighty top off the sarcophagus. Grunting with the effort, they finally edged the lid open, the smell of decomposition hitting both of them and making the older man gag. Together they pushed the lid further. It shifted a little. Again, they pushed. It slid again. On the third try it crashed on to the floor on the other side of the sarcophagus. The noise was deafening in the confined space
.

Losing his nerve, the older man hurried to the door and looked out. For a long, breathless moment they waited for the sound of someone raising the alarm. But the noise hadn’t woken anyone. Not even the stonemason who lived by the cemetery gates
.

‘
Help me,’ the younger man ordered
.

‘
Shut up!’ the first snapped, turning back to the tomb and shining the light into it
.

Expressionless, he stared at the remains of the man who had been buried a month before. As the odour increased – suffocating in the cramped vault – the robber could see that the corpse’s white collar and cuffs were stained with decomposition fluids, the face puffy and oozing, the crossed hands black on the underside of the fingers and palms where the blood had settled in death. Supposedly airtight, the sarcophagus had, however, leaked in enough oxygen and damp to begin decay. Sinkage in the ribcage and eye sockets was pronounced and the lips of the cadaver had shrunk, drawn back from the bared teeth like an animal about to attack
.

Stooping down, he took out a knife and hacksaw from his bag and turned back to the sarcophagus. Leaning over, he pulled back the white grandee collar from the corpse’s throat, the smell intensifying as he touched the slime of the skin. Then, savagely, he drew his knife across the throat, the skin and muscle giving way and exposing the bone beneath
.

Handing him the tool, the older man turned away, not seeing but hearing the repetitive sound of sawing. When he finally looked back, his companion had climbed into the coffin and was straddling the corpse. The cadaver’s flesh pooled under his fingers, his hands slipping as he sawed frantically at the neck bones. Finally, sweating with effort, the man tried to lift the head off, hoping to wrench it free from the body. The sound of cracking echoed in the dark crypt, the shadows of the grave robbers looming vast on the damp walls, the oil lamp flickering hellishly as he yanked at the head
.

With a sickening crunch it came away from the body, the grave robber losing his balance and falling back against the corpse’s legs
.

Slowly the horned moon sidled up the night sky, making chalk patches on the indigo earth. Moving furtively down a quiet road, the men kept to the shadow of the trees, then entered the Rue d’Arles, the younger man walking round the back of a large house and rapping on the door. Instantly a tall man appeared, putting his forefinger to his lips and ushering them into a shuttered basement room. That he had money was obvious from his clothes, his voice Parisian, at odds with the rural French spoken by the resurrection men
.