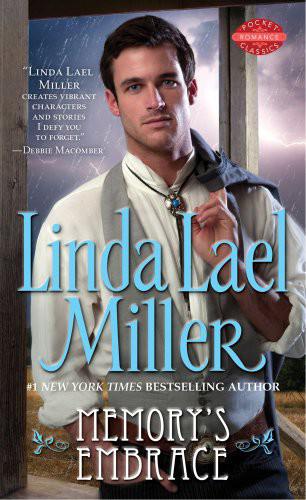 Be sure to read her marvelous series

… and the newest novel in her beloved, bestselling Springwater series
SPRINGWATER WEDDING

All available from Pocket Books

He strode over to her and unpinned her hair, so that it fell about her shoulders in shimmering waves and curls, catching the early morning sunlight, smelling of fresh air and woodsmoke and castile soap.

It seemed natural to kiss her, and he did, cautiously at first and then with a hunger that was so intense that it could not be denied.

The onslaught of emotion washing over Tess in the wake of the kiss was devastating, buckling her knees.

“My sentiments exactly,” he replied.

Lily and the Major

Emma and the Outlaw

Caroline and the Raider

The Women of Primrose

For orders other than by individual consumers, Pocket Books grants a discount on the purchase of
10 or more
copies of single titles for special markets or premium use. For further details, please write to the Vice President of Special Markets, Pocket Books, 1230 Avenue of the Americas, 9th Floor, New York, NY 10020-1586.

This book is a work of historical fiction. Names, characters, places and incidents relating to nonhistorical figures are products of the author’s imagination or are used fictitiously. Any resemblance of such nonhistorical incidents, places or figures to actual events or locales or persons, living or dead, is entirely coincidental.

POCKET and colophon are registered trademarks of Simon & Schuster Inc.

For Pamela Anne Lael I love you, little sister.

A
DENTED ENAMEL DISHPAN SOARED, SPINNING LIKE A
discus, high into the slate gray sky. Curious, Tess Bishop wheeled her disabled bicycle to the edge of the road, laid it carefully on its side, and, holding her box camera under one arm, made her way through the brush and into the clearing beyond.

A peddler—the gilt-painted legend on the side of his grim black wagon indicated that his name was Joel Shiloh—dodged the falling dishpan and flung a coffeepot heavenward in almost the same motion.

“Come down here and fight!” he bellowed, as grounds and coffee splattered upon his disreputable
shirt and vest. He was a tall man, probably in his early thirties, and, as Tess watched in amazement, he shook one sun-browned fist at the sky and shouted again. “Come on, damn it! Fight!”

Tess lifted questioning hazel eyes, and saw nothing but clouds. Threatening clouds. Who was this man talking to, anyway? God?

The peddler placed his hands on his hips and tilted his head back so far that Tess thought his dirty bowler hat would surely fall off into the grass. “Well?!” he yelled, resting one booted foot on the stones surrounding his campfire. “What are you waiting for?!”

Tess was just about to scramble back to the road, and her bicycle, when the man suddenly roared an exclamation of mingled pain and rage and dashed, hopping awkwardly as he went, toward the stream that edged the clearing.

“Don’t—” she began, in warning, lifting her free hand as though she might stop him in time.

But, of course, she couldn’t, for she was too far away. The peddler plunged into the stream at exactly the place Tess had feared he would and disappeared to the brim of his bowler hat.

Tess carefully set down her camera in the grass and then, gripping her calico skirts to keep from stumbling, raced across the verdant clearing, with its sprinkling of wild violets, to the stream bank.

The peddler came up sputtering before Tess could reach him, and, glaring up at the sky, his hat floating beside him, his hair plastered to his face in dripping tendrils, he roared, “That was a dirty, underhanded trick!”

Tess, who had forgotten her first impression of this
man, that he was either drunk or insane, stopped just short of the stream and stared at him. “Who on earth are you talking to?” she demanded.

Joel Shiloh looked at her in exasperation, but if he felt any chagrin at behaving in such a maniacal fashion, he didn’t show it. He snatched his hat before it could swirl away on the current, tossed it into the windblown grass, and struggled out of the water to stand, gasping, on the bank.

After a few moments, he sat down in the grass with a disgusted grunt and began tugging and wrenching at one sodden boot. Having no luck, he looked up at Tess, azure eyes flashing in a beard-stubbled and yet strangely aristocratic face, and said, “Help me, will you?”

Tess was never able to say why she didn’t turn and flee, as any sensible young woman would have done—after all, the man was clearly mad and it was about to rain and she was still nearly five miles from home. Aunt Derora was going to skin her for sure.

“What?” she asked, befuddled.

“Pull my boot off!” he snapped back, impatiently, and cast another scathing look at the dark, rainburdened sky.

“You could say
please
,” Tess pointed out reasonably.

“Please, then!” he shouted.

“You have a truly nasty temper, Mr. Shiloh,” she remarked, but she did grasp his muddy boot—there were holes in the sole—when he extended his foot. Pulling required such effort that she grew red with the strain, and a mischievous light danced in the peddler’s eyes as he looked up at her.

“I do, don’t I?” he agreed companionably.

Tess tugged with all her might, and when the boot
came off, at last, she went tumbling backward into the grass. She got up quickly, disgruntled and stunned, certain that the peddler would laugh at her.

Instead, his attention was absorbed in peeling off a stocking as wet and shabby as his boot had been; Tess might not have been there at all for all the notice he paid her.

At that precise moment the rain began, in a fierce torrent, drenching Tess’s hair, which fell free to her waist, and causing her dress to cling.

But dresses were the last thing on Tess Bishop’s mind. “My camera!” she shrieked, bounding to her feet and racing across the clearing to snatch up the treasured black box, clutch it to her breast, and cast wildly about for a place of shelter.

She tried to reach the latch on the rear door of Mr. Shiloh’s wagon, but it was too high. Muttering, Tess began to leap for the thing, falling short each time.

Mr. Shiloh, oddly calm and resolute now, materialized at her side, deftly worked the catch, and opened the creaky door. Tess thrust her camera inside and then sighed with relief, caring nothing for the fact that she herself was soaked to the skin. She had saved for a long, long time to buy that camera.

Instead of answering, Joel Shiloh boldly grasped her
waist in his hands and lifted her, so that she sat on the floor of the wagon, her feet dangling from the door. Rain thundered on the curved, sturdy roof and further soaked the peddler, who stood for a moment, seemingly oblivious to the downpour, watching Tess with a sort of wonder, as though he had seen her before and thought he should recognize her.

Just Another Hero by Sharon M. Draper
A Wind of Change by Bella Forrest
A Long Way to Shiloh by Lionel Davidson
Love Hurts by Brenda Grate
It Begins With a Rogue's Bite by Jessica Frost
Highland Destiny by Hunsaker, Laura
We Are Still Married by Garrison Keillor
Love in Maine by Connie Falconeri
Expiration Date by Duane Swierczynski
Lives in Writing by David Lodge
Our partner