Men of London 02 - Sight and Sinners 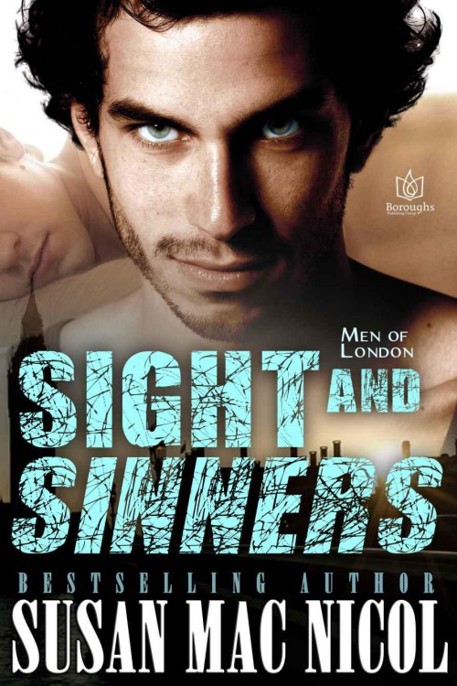 THE MEN OF LONDON

From Charing Cross to Waterloo, there’s no escaping love.

28-year-old Draven Samuels has a tragic past, but as an investigator with a high-profile London company he now gets what he wants. Tough, sarcastic, and sceptical, he has no patience for lies and even less for people who waste his time. Even if they’re as beautiful as the wild and dark-haired Taylor Abelard. Especially when they’re talking over the body of a murder victim.

Psychic Taylor Abelard is used to people calling him a freak. He can see past events and feel the ghostly vibrations of people close to him who’ve passed on. It’s why he doesn’t get too close to the living. But this time, against his better judgment, despite Draven’s mocking rejoinders, Taylor will get closer than ever before. The mystery of a dead friend will lead the two men down a dark and seedy trail of blackmail and lies. Add in the heartbreak of a family tragedy, and events lead them straight into each other’s arms. By the end of this night, all their demons will have risen—and been banished with the dawn.

PUBLISHER’S NOTE: This is a work of fiction. Names, characters, places and incidents either are the product of the author’s imagination or are used fictitiously. Any resemblance to actual events, locales, business establishments or persons, living or dead, is coincidental. Boroughs Publishing Group does not have any control over and does not assume responsibility for author or third-party websites, blogs or critiques or their content.

All rights reserved. Unless specifically noted, no part of this publication may be reproduced, scanned, stored in a retrieval system or transmitted in any form or by any means, electronic, mechanical, photocopying, recording, or otherwise, known or hereinafter invented, without the express written permission of Boroughs Publishing Group. The scanning, uploading and distribution of this book via the Internet or by any other means without the permission of Boroughs Publishing Group is illegal and punishable by law. Participation in the piracy of copyrighted materials violates the author’s rights.

For all those staff who take care of people in critical care and intensive care wards. They do a tireless job looking after patients who sometimes aren’t able to tell them how they feel, like Jude, and I think that must be terribly frustrating and heart-wrenching. I’ve had two family members in this situation, and I can tell you it sucks: for the patient, for the family, and for the nursing staff who sometimes have to simply make those people as comfortable as they can. For all of you who take care of the people we love when we can’t—I thank you from the bottom of my heart.

Authors Note
About the Author

The man Taylor was blowing definitely didn’t know how the hell to keep quiet. Taylor’s lips were wrapped around his dick, while above him a man stood, panting and moaning, turning the air blue with his curses. Taylor stopped what he was doing, making the blow-job recipient groan in dismay, and glared at the sweaty face above him.

Georgie’s wide eyes cast a quick glance around the deserted alleyway behind ‘Music Mayhem’ where Taylor was employed, then looked down at Taylor kneeling between his legs.

“Sorry, mate, it’s just that you’re so damn good at this and it’s been a while.”

Taylor felt a surge of pride at that praise and went back to what he’d been doing. A few minutes later, he’d successfully made Georgie blow his load, while keeping the ruckus to a few grunts and sighs, and Taylor himself had been jacked off by Georgie’s rough hands. He watched as the satisfied thirty-year-old bricklayer went back to the building site he worked at. Taylor rubbed his mouth, still tasting
eau de
hunky builder and sighed. He and Georgie were a long-standing arrangement, buddies even to the point of sharing a few beers after work, but Taylor was really getting fed up of the casual sexual encounters. He wanted something else. A Gideon and Eddie relationship, perhaps.

Oh yes, that would be an idea. I could stop all this damn nonsense in cold alleyways.

Taylor gave another deep sigh, made sure he had no stray spunk on his clothing and opened the back alley door to get back to work.

Blood and faeces. They were pungent smells that ripped into his nostrils and made his eyes water. The soft light of the dimly lit room cast shadows, gargoyles looming on red speckled walls. Somewhere in the room, a clock did what it was made to do.
Tick. Tick. Tick
. The air was heavy with the scent of death, redolent with grief and pain. It sucked the breath out of his body, leaving him helpless, useless.

Taylor screamed, gut-wrenching sounds that pierced through the heaviness of the air of his bedroom, as he fought his way out of the hell he found himself in. His hands grasped at bed covers that were already creased and wet with sweat and as his eyes snapped open in panic and despair. He took a deep, shuddering breath and shot upright in bed.

It was a chilly February night and although the window was open to let cool air in, the room was stuffy and smelled stale. Taylor thudded back against the wall and shivered as his naked back hit the peeling plaster, causing goose bumps to form on his clammy skin.

His bedroom door was flung open and a warm, male-scented bundle leapt onto his bed, wiry arms reaching for him to pull him close against a silky chest.

“Oh my God, Tay, you fucking scared me to death with that scream of yours!” Taylor’s housemate, Leslie, gazed at him in horror from eyes still crusted in sleep and hollowed with dark shadows. The last few nights had been keeping Leslie awake as well, as he came to Taylor’s aid when the nightmares hit with the force of an Acme sledgehammer raining down upon Taylor’s head.

“What the hell is going on, sweetie? Where are these horrible dreams coming from?” Leslie’s dark eyes framed with long lashes regarded Taylor with concern and fear. Taylor shuddered as Leslie’s fingers combed themselves though his sticky, wet hair and the closeness of his slim body gave solace to Taylor’s shaking form.

“The fuck I know,
chéri.
”
Taylor heaved a deep breath. His French roots were buried deep and he didn’t have a good grasp of the language apart from schoolboy-type phrases when he and his family had travelled to Provence for family holidays. His father had insisted on English at home despite his Mauritian-born mother speaking French. “It’s the third time this week, different each time but still the same, you know?”

Leslie stared at him blankly. Taylor sighed and shifted in the bed, grimacing at the boxers stuck in the crack of his backside and groin. He reached down to pull them out and stop the constriction currently threatening to dissect his balls in half. Leslie let him go and sat back, his blue silk pyjama-clad body curling like a cat against the wall. Despite his emotional state, Taylor let out a soft chuckle. Even in the hot, humid nights, Leslie looked like a courtesan ready to please a prince. His innate sense of “good fashion or death” existed even when he slept. Leslie had always said if he died in his sleep, he wanted to go out with a sense of style.

“I mean, it’s the same scene—the blood, the despair—but each time the dream shows me the whole thing from a different angle. It will stop soon, like it always does. It’s just the whole initial phase thing of someone’s death that affects me.”

Not for the first time Taylor cursed his abilities, abilities that had plagued him since he was five years old. This whole “psychic” element of his psyche was really started to piss him off. He hadn’t asked for it and he as sure as fuck didn’t really want it.

But if I hadn’t got this ability, I wouldn’t have been able to help Eddie find Luke. Luke would have died.

Some months ago, using his abilities, Taylor had managed to help his ex-housemate, Eddie, prevent his younger cousin from dying from a suicide attempt.

“But you normally only feel this sort of thing if you’re close to someone, Tay; that’s how you say it works.” Leslie’s voice trembled. “So it must be someone you know, or somebody they are close to.” His eyes widened. “Oh God, it can’t be Eddie or Gideon, can it? Please tell me they’re okay.” He bounced on the bed in agitation, his dark black bangs falling over his face, obscuring cobalt blue eyes. “Could it be your dad?”

Taylor reached out and stayed his friend’s anxious movements. “No, Leslie, it’s none of them.” Eddie had moved in a month ago with his boyfriend, Gideon, into the flat above the restaurant Gideon owned in Soho. “The lads are probably rutting like rabbits even as we speak.”

“As for my dad…” His face twisted. “I’m not that close to him anymore since mum died and he remarried. The last time I spoke to him was about two months ago.” He shrugged. He’d intended going home to Bristol for Christmas but his father had told him he and Meg were going on a skiing holiday. So Taylor had spent the festive season with his friends instead.

He leaned back and reached over for his packet of cigarettes on the nightstand. He didn’t miss Leslie’s gimlet-eyed stare but he ignored it. He lit one up and took a deep, satisfying drag, making sure he didn’t blow smoke anywhere near Leslie. He knew he’d get smacked if he did.

The Golden One: A Novel of Suspense by Elizabeth Peters
Outside by Nicole Sewell
You Are Here by S. M. Lumetta
Coincidence by David Ambrose
Unsuitable Men by Pippa Wright
Unconquerable Callie by Smallwood, DeAnn
Ralph Compton Death Along the Cimarron by COMPTON, RALPH
Nemesis: Book Four by David Beers
Nordic Lessons by Christine Edwards
The Floating Girl: A Rei Shimura Mystery (Rei Shimura Mystery #4) by Sujata Massey
Our partner