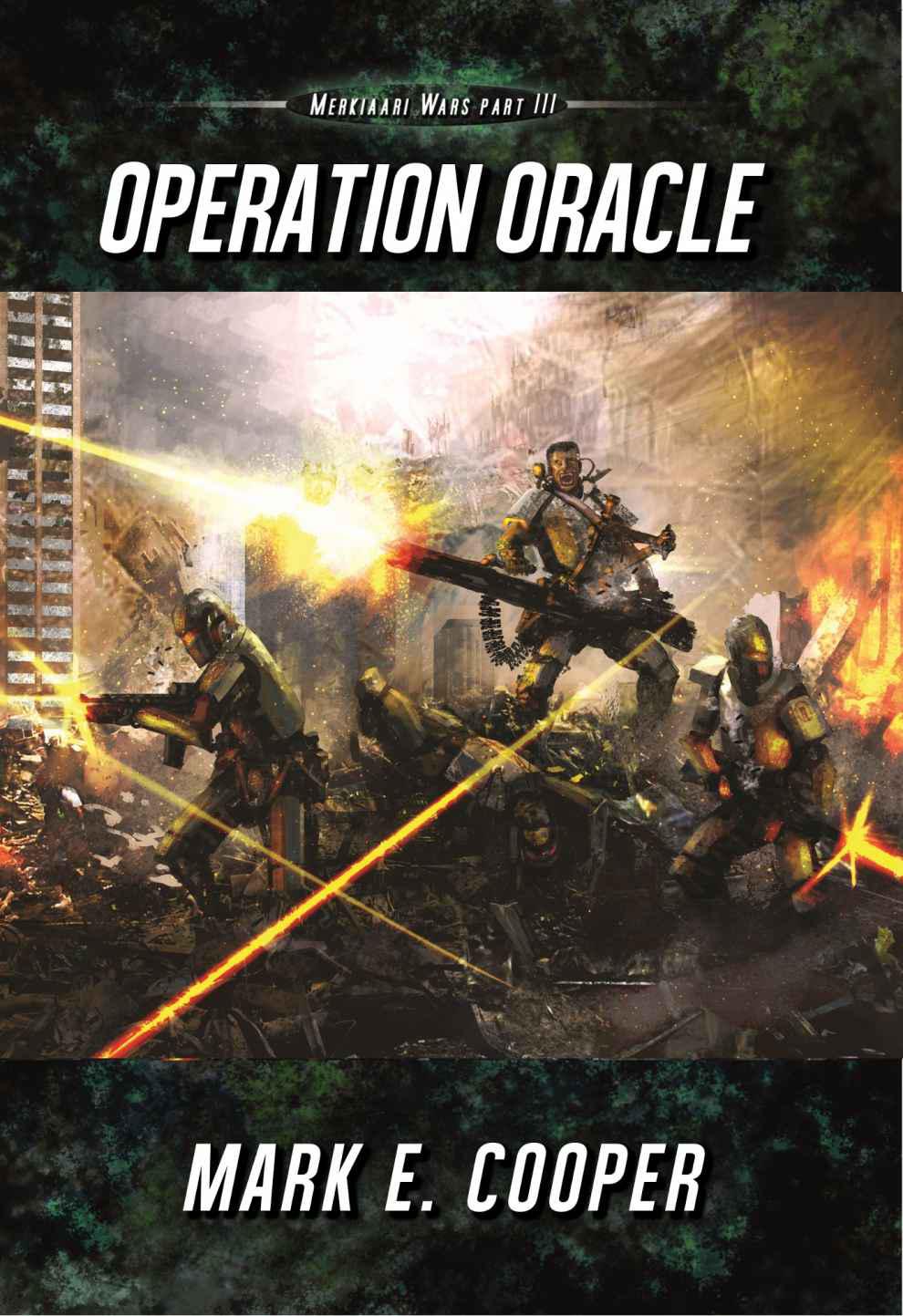 A word on language and pronunciation

This book was written and produced in the United Kingdom and uses British English language conventions. For example the use of ‘ou’ in the words colour and honour instead of the American spellings: color, honor. Another example would be the interchangeable use of ize and ise in words such as realise or realize. Both are correct.

The Shan are an alien species with their own verbal and written language, but for story purposes all Shan dialogue is translated into English. However, names of characters remain as close as is possible to the actual alien name. See examples below for pronunciation:

Acting Captain Gina Fuentez, 501
st
Infantry Regiment, crouched behind the rubble to check the take available to her via TacNet. The regiment’s tactical network was a wonder to someone with a Marine Corp background. She had been a viper for only a couple of years, though it seemed even less than that due to time being weird in foldspace. TacNet was still a wonderful novelty to her. General Burgton’s regiment did things a little differently to other Alliance forces, they did them his way or no way, and he was a strong believer in the axiom: bigger is better. Whether applied to firepower, manpower, or information didn’t matter. To him, bigger was better and always had been. It was hard to argue when Gina was one of the beneficiaries. TacNet meant that no matter where she was, or doing what, she had access to the big picture. It wasn’t her rank either. Every viper had access to the same information. It was so very different to her Marine Corp days.

As a marine, she had followed her orders and often didn’t know why those orders were given. Information was compartmentalised behind rank and parcelled out on a need to know basis. Her mission goals had therefore been simplified. Simplified did not mean simple. She had followed orders that sometimes didn’t seem to make sense, and had to go on faith that all would become clear in time. It usually did, but that methodology did nothing to alleviate anxiety levels.

General Burgton preferred to run his regiment otherwise, especially so in combat. It meant everyone knew what was expected of them and their comrades, and also meant any viper could immediately take up the slack should one of them fall. They all knew the plan, they all had the ability to evaluate its progress, and they all could take steps to ensure it succeeded without fearing their actions might screw up other parts of the mission. TacNet was real time; information flow fully automated by a viper’s internal computer system, and was linked via satellites with the General and his staff aboard
Grafton
in orbit.

Gina quickly evaluated what TacNet was displaying. It was especially important these days, as she wasn’t fighting exclusively with other vipers and Shan warriors under viper command. Fifth Fleet had brought a large ground force to join the fight. Reinforcements were of course welcomed by the Shan, but the many different forces each had their own command structures subordinate only to Admiral Kuzov. Admiral Meyers commanding TF19 was no longer the biggest show in town, and had placed herself at his disposal as per her orders delivered to her when Fifth Fleet arrived. All of which meant that Gina and the other vipers were no longer officially in charge of the ground war, but the Shan warriors who had fought beside them did not see it that way. They continued to look to the vipers first for orders, a fact the other Human ground commanders found irritating in the extreme. Not that they could do much about it. They were guests of the Shan after all.

With so many different forces involved in the battle, Gina could no longer rely upon all combatants doing the right thing. Only vipers had TacNet; an integral system built into all vipers. Everyone else, except the warriors under direct viper supervision, had to use satellite feeds and ground observation to fight their battles.

That reminded Gina to check the feed overhead. She dismissed TacNet and accessed the satellite network seeded in orbit by Admiral Meyers when they first arrived.

Gina studied the battlefield displayed on her HUD (head up display). The display was suddenly populated by heat sources that she began to decipher. It was night and the devastation was softened, but she wasn’t interested in the broken architecture of Shoshon. She was looking for any units out of position, or any enemy movements. Everything seemed fine, and she quickly reported in.

“Gold-three, Alpha-leader. All secure, no movement, no concerns,” Gina said using her internal comms. And that was another thing. Now she was working as part of the forward scouting element and not the main offensive force, she had to report twice. Once on viper comm to
Grafton
, and once using helmet comm to the ground commander in charge of Shoshon. “On schedule.”

“Copy no changes,” she said. “Alpha-leader out.”

Gina quickly repeated her report to force commander Shoshon, a woman she had met only briefly by the name of Colonel Elizabeth Jung 2
nd
Faragut Strike Force, and quickly moved to another observation point. So far, her internal viper comm had proven hard for the Merki to track. It was a high speed burst transmission and used all local viper units as a sort of broadcast gestalt, like an old style antenna farm. It overwhelmed the ability of the Merki to track the transmission’s origin. The Merki had proven that helmet comms—although encrypted and as discreet as current technology could make them without making them useless—could be tracked all too easily. No one knew how they did it. Alliance stealth tech was supposed to be proof against Merki gear, but they now knew that was not so. Like the damnable Merki jamming they had confronted at the start of the Harmony campaign, it had been an unpleasant surprise.

It was standard procedure for the scouts to snoop, report, and then scoot to avoid incoming fire; Gina did so successfully. She wasn’t sure if the Merki had detected her transmission, or the strike was a lucky guess, but seconds after relocating, her previous OP (Observation Point) was hit repeatedly. She observed the result, clinically analysing the Merki strike and backtracking to find the gunners.

There were multiple batteries of artillery deployed in and around Shoshon, and in theory, she could have passed her targets to any of them, but she chose the viper controlled battery because she wanted fast accurate fire with minimal fuss such as seeking authorisations or needing verifications. Merkiaari had standard procedures too, like getting the hell out of Dodge after trying to snipe someone.

Gina smiled, happy to hear his voice. Eric had been trading off with Colonel Flowers since they upped sticks from Child of Harmony and relocated to Harmony. She gave him three targets.

“Acknowledged,” Eric said. “On the way.”

She waited and watched to evaluate the strike. Shells rumbled overhead, clearly audible, and explosions lit the night. Eric had chosen to use the regiment’s self-propelled guns over their Hellfire missile launchers, probably to reduce the chance of return fire. Gina would have made the same decision. Hellfire missiles were effective but flashy ordnance, especially in the dark when their bright exhaust could so easily be seen. She compared what she was seeing with the new heat sources displayed via TacNet. They matched. The Merki were probably dead. Probably. But they had ammo to spare so she let Eric pound the targets for a while.

“Targets eliminated,” Gina reported when she was in danger of being accused of overkill.

Explosions and gunfire continued uninterrupted in other parts of the city, and Gina wished she could be one of the trigger pullers, but she had her orders. Her temporary command of Alpha Company was in name only now. They had lost so many units on Child of Harmony that hasty reorganisation had left her with little more than a squad to command. Good then that her new mission didn’t need more than a squad to complete. Her remaining eight units, like Gina herself, were operating solo and scouting the enemy. It was a mission the vipers were performing more often as their numbers dwindled, she thought grimly. The Child of Harmony campaign had halved the number of combat capable vipers in the entire Alliance. Not all were dead, thank god, but they were out of the fight for the duration. Most were so badly damaged they had gone into automatic shutdown. Hibernation was a viper’s last hope of survival; their IMS (Integrated Medical System) used it to shunt all resources toward making repairs in a last desperate race to prevent death. Unfortunately, if the damage was that bad, a unit’s reactivation to full combat readiness was unlikely. Most remained in hibernation and were stored in stasis aboard
Grafton
with their true dead companions. Hibernation was the little death, a name the two hundred year old veterans of the last Merki War had chosen for it because unlike true death it did not last. Gina had experienced it only once, and was lucky enough to awake fully repaired from her own resources. A rare thing.

Gina went back to work.

Traditionally, vipers were deployed in advance of other forces to seek and destroy Merkiaari. The current campaign was a little different in that her job was not to kill Merki... well, she hadn’t actually been
ordered
to refrain, but it was heavily implied, and as a result her people had defaulted to a pure scouting role. Recon was actually something she was practiced at. A lot of her time as a marine had been spent either performing that task or training to perform it. So the role wasn’t an uncomfortable fit.

Gina moved through the city avoiding contact and only killing Merkiaari when she had a good excuse. A lone Merki troop here—oh sorry I had to put her down to prevent her raising the alarm, sir. Why didn’t I avoid detection, sir? Well, she took me by surprise, sir. Gina grinned and snorted at her musing. Oops, so sorry, but that Merki squad had it coming, sir. They fired first. Must have tracked my last transmission.

She wasn’t the only viper doing the same or similar things and probably having the same excuses lined up. Vipers were designed and built to kill Merkiaari, not bypass them. TRS (Target Recognition Software) even made them automatically attack Merki targets by default. It actually took intervention on a viper’s part to prevent them killing Merki upon detection. She didn’t expect censure from her own commanders, they were vipers too, but Colonel Jung might be another matter. It wasn’t that Jung didn’t want the Merki dead. She absolutely did want them dead, but she was a strict disciplinarian and stickler for the rules. That was fine with Gina, she had worked with all kinds, but Jung wanted Shoshon liberated by her plan with her hands at the controls. She was an ambitious officer who wanted her first star, and winning battles especially against Merkiaari would be a big help. Shoshon itself was no prize anymore. It was pretty much trashed, but the campaign was coming to a close. This battle would probably be the last one, certainly the last that Jung could indisputably claim as hers. Gina doubted the final round up of stray Merki troops would win anyone a medal or promotion. Shan would be tidying up strays long after Fleet pulled out, she was sure.