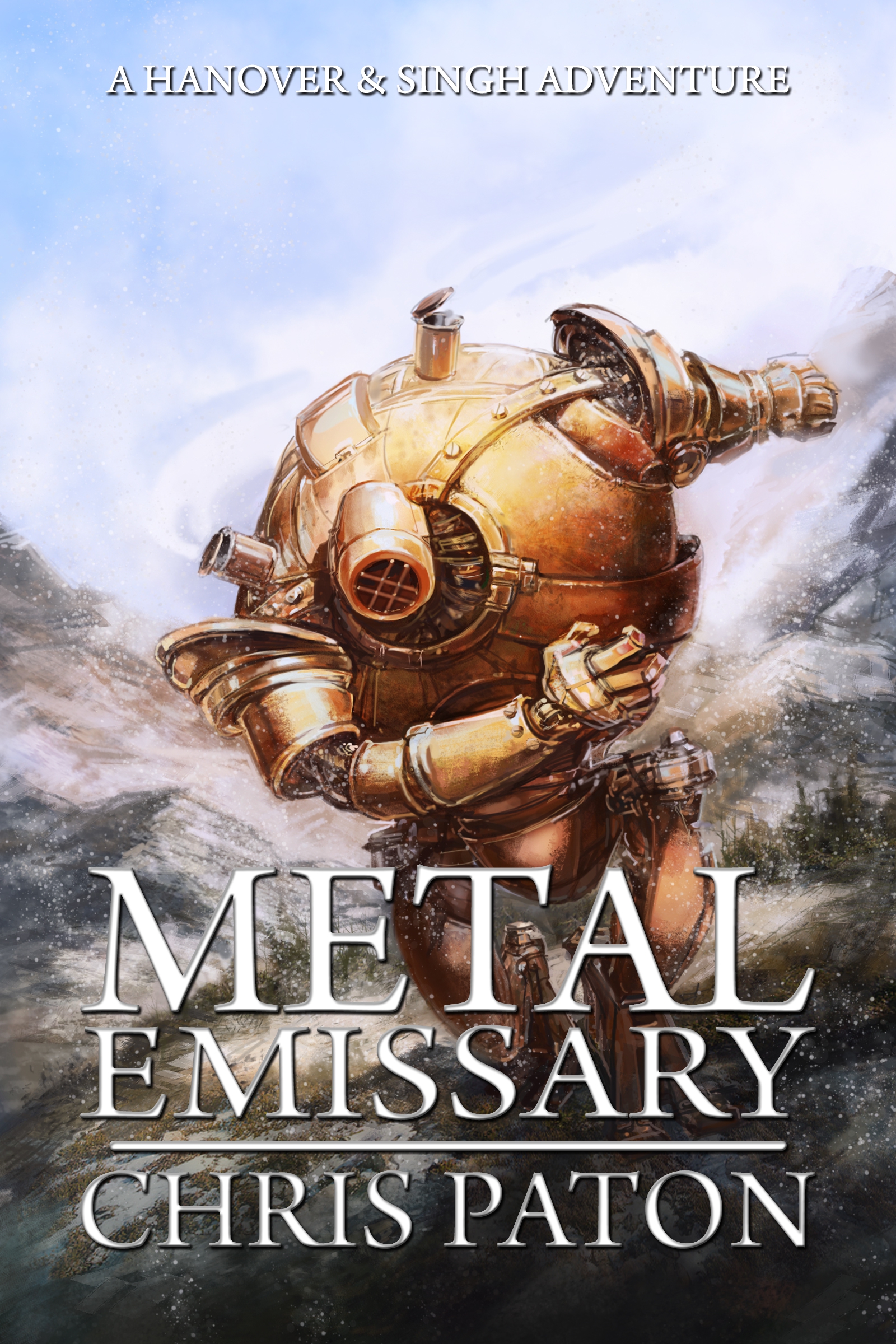 This book is a work of fiction. The names, characters, places and incidents are products of the writer’s imagination or have been used fictitiously and are not to be construed as real. Any resemblance to persons, living or dead, actual events or organisations is entirely coincidental.

All rights are reserved. No part of this publication may be reproduced, stored in a retrieval system, or transmitted, in any form or by any means, without the prior permission in writing of the author. 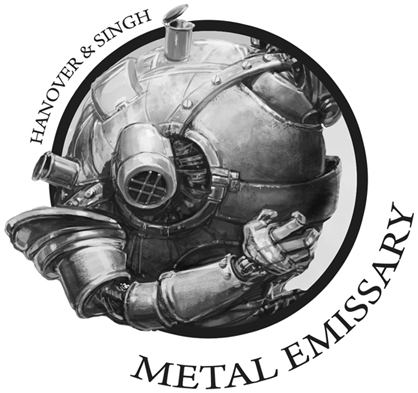 Luther Wallendorf shuffled the toe of his leather brogue into the imprint of a large, cloven foot depressed into the cobblestones outside the green doors of his factory. He leaned on his silver-capped cane as the footprint, several inches deep, swallowed his shoe and tipped the grey-haired man off balance. Wallendorf’s hat rolled off his head and onto the ground. With a firm grip of Wallendorf’s elbow Hans Schleiermacher helped the older man out of the hole and back onto the cobblestones. Schleiermacher bent down to retrieve his employer’s black bowler hat. Brushing the slush from the brim with his sleeve, he handed it to him.

“Thank you, Hans. I think I can manage now,” Wallendorf placed his hat on his head and tapped his cane on the ground. He smiled at his aide. “To think we built such a monster.”

“Yes, Herr Direktor,” Schleiermacher clasped his hands behind his back. “Quite an achievement.”

“But will it work, Hans? Will it do the job?” Wallendorf waved his cane at the tall double doors of the factory. “Let us go inside. It will not do to keep the President waiting.” Wallendorf hummed a short refrain, the snowy whiskers of his thick beard twitching as he breathed. Schleiermacher walked up to the doors and pulled the chain of a steam whistle mounted to the right of the doors with large brass bolts screwed into the rough red brick walls of the factory. Gears clicked and pulleys rasped as the doors folded and collapsed like a Chinese fan, winding into the eaves of the tall gables. Wallendorf stopped humming. Closing his eyes he took a deep breath of leather and oil, coal dust and wood shavings. Opening them, Wallendorf smiled and nodded at Schleiermacher to enter.
Will I ever tire of this,
he wondered. Wallendorf’s cane clicked on the cobblestones as he followed his aide inside the factory.

The Direktor leaned on his cane as Schleiermacher closed the doors. He winked at Schleiermacher as the doors clicked and whirred behind them. Wallendorf tapped his cane once and set off along the broad aisle between the frames of copper pipes and valves hissing above the workspaces and desks of leather-aproned factory workers and shift managers. Balloon-like electric bulbs buzzed like bulbous glass bees within metal cages hanging from the pipes. The tapping of pipes and the wrenching of metal hammered the warm air blowing down the length of the factory floor from huge fans in the far wall.

“Good morning, Frederik,” Wallendorf tipped his hat as he passed one of the larger workspaces.

“Morning, Herr Direktor,” the shift manager turned away from the tiny hydraulic valve he was examining under a large magnifying glass and picked up a ledger from his desk.

“Not necessary, Frederik. I have a meeting,” Wallendorf pointed toward the far end of the factory floor with the ivory pommel of his cane.

The factory floor opened up into a long, broad rectangle of wooden ladders and metal scaffolds caging the skeletons of monstrous iron beasts. Factory workers and supervisors armed with clipboards and wrenches scurried about the four-legged metal mammoths, swinging from the giant ribs on hawser-line swing seats. Wallendorf stopped and squinted into the distance. “Where are the emissaries, Hans?”

Schleiermacher leaned closer to Wallendorf’s ear. “Over there, behind the mammoth walkers, Herr Direktor,” he stretched his right arm past Wallendorf’s shoulder and pointed with a curved palm. “On the right.”

“When were they moved?” Wallendorf began walking toward the large bay.

“Wednesday, Herr Direktor, on your recommendation following word that the President wished to visit the factory. You said they would be better placed closer to your office.”

“Yes,” Wallendorf chuckled. He stopped and smoothed the lapels of his winter coat. “Do you know, I have always wanted them where I could see them, but I could never convince my son to move them.”

“Yes, Hans,” Wallendorf lifted his eyebrows and smiled. “But we got our way in the end, didn’t we?”

“Yes, Herr Direktor,” Schleiermacher gestured toward the work bay to the right of the factory floor. “If you will permit me, we are running a little late.”

“Of course,” Wallendorf tapped his cane on the smooth stone floor and resumed walking. “We must not keep the President waiting.”

In the work bay assigned to the Wallendorf emissaries, a group of three tall men wearing long, dark winter coats and tall hats chatted together. Standing to one side, a shorter, younger man wearing smooth grey trousers and a maroon waistcoat embroidered with dark cotton stripes slipped his watch inside his pocket. He stepped forward to receive Wallendorf as he approached.

“Ludvig,” Wallendorf greeted his son with an embrace. “I see the President has arrived already.” Wallendorf ignored his son’s frown and stepped around him to greet the tallest of the three men. “Herr President,” Wallendorf extended his right hand.

“Herr Direktor,” President Franz Baum shook Wallendorf’s hand. “You know Herr Richter from the Ministry of Finance and Herr Bremen? I forget to which department, Herr Bremen is attached.”

“The Ministry of Foreign Service,” Bremen tipped his hat.

“Yes, of course.” Lifting his head to look them in the eyes, Wallendorf shook hands with the two men. “I trust my son, Ludvig, has shown you around the factory?”

“All but the emissaries, Herr Direktor,” Richter smiled.

“I left them for you, father,” Ludvig joined the men. He stood just behind and a little to the left of Wallendorf. “I know how much they mean to you.”

“Yes,” Wallendorf’s grey eyes twinkled. “Come, let me introduce you.” Tapping his cane, Wallendorf walked toward three scaffolds draped with heavy canvas tarpaulins. He stopped in front of the first and waited. Walking past Wallendorf Schleiermacher pulled at a corner of the canvas and peered inside. He let the canvas fall and turned to the men waiting beside Wallendorf.

“They will be ready in just a moment, gentlemen,” Schleiermacher bowed his head.

“All good things are worth waiting for,” Wallendorf chuckled. “How is the lovely Frau Baum, Herr President?”

“She is well, thank you,” the President nodded to Wallendorf. “She has expressed a keen interest in the emissaries, as has Herr Richter and his ministry.”

“We have noticed a significant increase in costs, something not entirely expected,” Richter coughed. “I wonder if you would care to comment, Herr Direktor?”

“If I may, father?” Ludvig stepped forward. “As you will soon see, the emissaries are perhaps one of the greatest and most intricate feats of engineering yet undertaken by Wallendorf Industries.” Ludvig paused. “More so than the mammoth walkers upon which Wallendorf has built its reputation as the confederation’s greatest industrial giant.”

“Any other father might try curbing such enthusiasm in front of such esteemed guests,” Wallendorf smiled. “Fortunately, I am not any other father.” The President laughed. “Please continue, Ludvig.”

“Yes father,” Ludvig nodded. “The original brief for the emissaries required a robust agent capable of autonomous movement and remote control. It seems that your political agents, young men,” Ludvig glanced at Bremen, “were subject to the dangers of hostile tribes in...”

“I think we can agree not to get into specifics,” Bremen waved his hand. He turned to address the President. “My office has worked closely with the Wallendorfs.”

“Continue,” the President tucked his hands inside his coat pockets.

“We tested our first prototypes in,” Ludvig paused at a glance from Bremen, “a suitable country. We have now refined the design and are confident that the new emissary, Mark III, is ready for active service.”

“Considering the expense, I trust that the Mark III is infinitely superior to its predecessors,” Richter raised his eyebrows. “Am I correct?”

“Herr Richter,” Wallendorf tapped his cane. “It will be my pleasure to reassure you that the ministry’s money is being exceedingly well spent.” He glanced at Schleiermacher.

“We are ready now, gentlemen,” Schleiermacher pulled back the canvas and stood to one side. Wallendorf led the men inside the scaffold tent, the silver cap of his cane muffled by the thick leather carpet covering the ground inside the workspace.

“My God,” Richter held his hand over his mouth as he entered the tent. “It is twice my size.”

Workers dressed in green overalls, wearing cotton hoods and protective glass goggles, removed the gangplanks from either side of the emissary allowing the men to walk freely around it. Ludvig stood next to Bremen and the President directly in front of the emissary.

“The cloven feet,” he pointed at the emissary’s massive appendages, four times the size of his own, “are inspired by mountain goats.” He pointed at the legs. “The knees are jointed with thick rubber gaskets, with a thick coating of goose grease to insulate them from the cold. In fact,” he lifted his hand high to point at all the emissary’s joints, “everything is lubricated and greased for the most extreme of environments. Once the emissary is set in motion, nothing can stop it,” Ludvig beamed. “You may remember the hole in the factory wall from the tour?”

“
This
did that?” the President whistled.

“What about combustion?” Bremen walked to the rear of the emissary. Wrapping his fist around one of the machine’s fingers as he passed, he could not close the gap between his fingers and thumb.

“The new tank,” Ludvig joined Bremen, “has a double furnace.” He pointed at the emissary’s rotund belly. “The globus tank is a much more efficient steam engine. It doubles as a fuel tank. When the tank is full, the emissary has a range of 400 kilometres. Depending upon the terrain, of course.”

“And the controlling mechanism?” Bremen slapped his hand upon the side of the machine. “What range does that have?”

“Again, depending upon the terrain...”

“Imagine it is line of sight.”

“Unlimited,” Ludvig shrugged. “We have yet to fully test it.”

Four Times Blessed by Alexa Liguori
George Stephenson by Hunter Davies
Two Ravens and One Crow - 4.5 by Kevin Hearne
One Way by Norah McClintock
Band of Demons by Rob Blackwell
Eyes of a Stalker by Valerie Sherrard
Burden of Survival: Killing the Dead : Season Two by Richard Murray
Loser by Jerry Spinelli
Sherlock Holmes and the Dance of the Tiger by Suzette Hollingsworth
The Secret Desires of a Governess by Tiffany Clare
Our partner