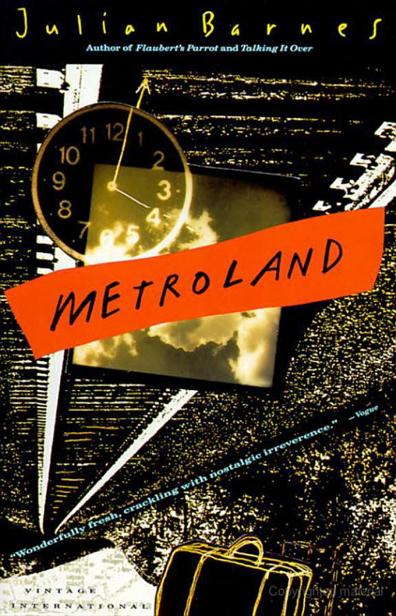 Only the author of
Flaubert's Parrot
could give us a novel that is at once a note-perfect rendition of the angsts and attitudes of English adolescence, a giddy comedy of sexual awakening in the 1960s, and a portrait of the accommodations that some of us call "growing up" and others "selling out."

Sixteen-year-old suburbanite Chris Lloyd and his mate Toni spend their free time wishing they were French, making up stories about strangers, and pretending to be
flâneurs
. When they grow up they'd like to be "artists-in-residence at a nudist colony." If youthful voyeurism figures heavily in their everyday lives, so, too, do the pleasures of analogy, metaphor, and deliberate misprision. Sauntering into one store that dares to call itself MAN SHOP, Toni demands: "One man and two small boys, please."

Julian Barnes could probably fill several books with these boys' clever misadventures, but in his first novel he attempts something more daring--the curve from youthful scorn to adult contentment. In 1968, when Chris goes off to Paris, he misses the May
événements
but manages, more importantly, to fall in love and learn the pleasures of openness: "The key to Annick's candour was that there was no key. It was like the atom bomb: the secret is that there is no secret." The final section finds Chris back in suburbia, married, with children and a mortgage, and slowly accepting the surprise that happiness isn't boring. "It's certainly ironic to be back in Metroland. As a boy, what would I have called it:
le syphilis de l'âme
, or something like that, I dare say. But isn't part of growing up being able to ride irony without being thrown?" Far from renouncing the joys of language, this novel wittily celebrates honest communication.
--Kerry Fried

“One would have to look hard to find a wryer, more lovingly detailed account of intellectual and sexual innocence abroad.…
Metroland
portrays at once the disturbing aspects of adulthood and the consolations of maturity, a balance that makes one glad Julian Barnes is still young and still writing.”

“Barnes’s books … celebrate the human imagination, the human heart, the boisterous diversity of our gene pool, our activities, our delusions.… They thrill the mind and the emotions; and he achieves, without tricks or puns, what Nabokov loved: esthetic bliss.”

“If all works of fiction were as thoughtful, as subtle, as well constructed, and as funny as
Metroland
, there would be no more talk of the death of the novel.”

“Julian Barnes is one of a handful of innovative English novelists who have succeeded in pulling the English novel out of the provincial rut in which it lay.”

“Flighty, playful … Barnes succeeds in vividly re-creating teenage precociousness, particularly what it feels like to be a young male encountering love and sex.” 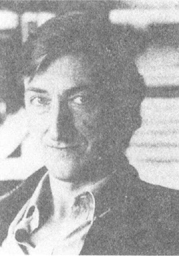 Julian Barnes was born in Leicester, England, in 1946, was educated at Oxford University, and now lives in London. His first six novels –
Metroland, Before She Met Me, Flaubert’s Parrot, Staring at the Sun, A History of the World in 10 ½ Chapters
, and
Talking It Over
– have brought him international acclaim. His newest novel,
The Porcupine
, has just been published.

Before She Met Me

Staring at the Sun

A History of the World in 10 ½ Chapters 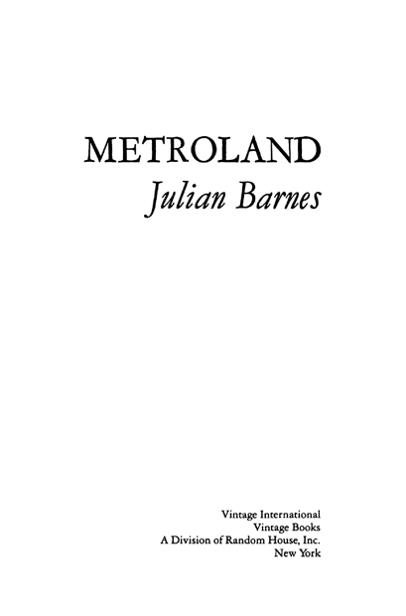 All rights reserved under International and Pan-American Copyright Conventions. Published in the United States by
Vintage Books, a division of Random House, Inc., New York.
Originally published in hardcover by Jonathan Cape Ltd.,
London, in 1980.

One
Orange Plus Red

Five
The Honours Board

There is no rule against carrying binoculars in the National Gallery.

On this particular Wednesday afternoon in the summer of 1963, Toni had the notebook and I had the glasses. So far, it had been a productive visit. There had been the young nun in men’s spectacles who smiled sentimentally at the Arnolfini Wedding, and then, after a few moments, frowned and made a disapproving cluck. There had been the anoraked girl hiker, so transfixed by the Crivelli altarpiece that we simply stood on either side of her and noted the subtlest parting of the lips, the faintest tautening of skin across the cheekbones and the brow (‘Spot anything on the temple your side?’ ‘Zero’ – so Toni wrote down
Temple twitch; LHS only
). And there had been the man in the chalk-stripe suit, hair precisely parted an inch above his right ear, who twitched and squirmed in front of a small Monet landscape. He puffed out his cheeks, leaned back slowly on his heels, and exhaled like a discreet balloon.

Then we came to one of our favourite rooms, and one of our most useful pictures: Van Dyck’s equestrian portrait of Charles I. A middle-aged lady in a red mackintosh was sitting in front of it. Toni and I walked quietly to the padded bench at the other end of the room, and pretended interest in a tritely jocund Franz Hals. Then, while he shielded me, I moved forward a little and focussed the glasses on her. We were far enough away for me to be able to whisper notes to Toni quite safely; if she heard anything, she’d take it for the usual background murmur of admiration and assent.