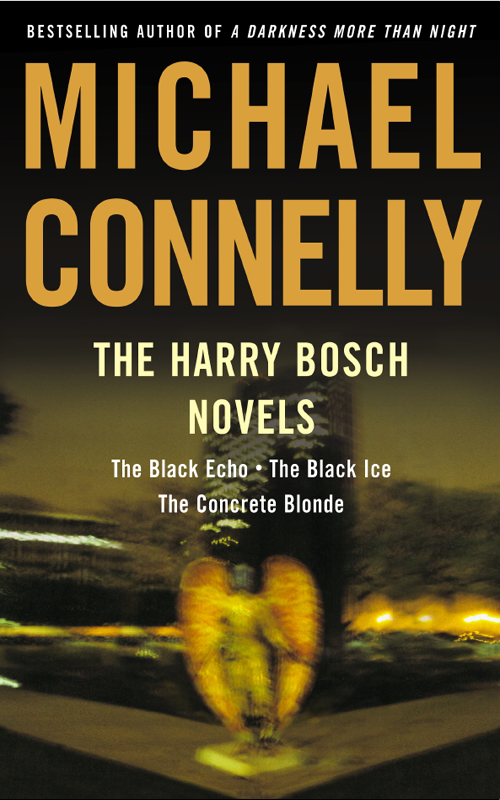 A Darkness More than Night

The characters and events in this book are fictitious.

Any similarity to real persons, living or dead, is coincidental and not intended by the author.

THE HARRY BOSCH NOVELS
. Copyright © 2001 by Michael Connelly. All rights reserved. No part of this book may be reproduced in any form or by any
electronic or mechanical means, including information storage and retrieval systems, without permission in writing from the
publisher, except by a reviewer who may quote brief passages in a review.

This is for W. Michael Connelly
and Mary McEvoy Connelly

I would like to thank the following people for their help and support:

Many thanks to my agent, Philip Spitzer, and to my editor, Patricia Mulcahy, for all their hard work, enthusiasm and belief
in this book.

Also, thanks to the many police officers who over the years have given me an insight into their jobs and lives. I also want
to acknowledge Tom Mangold and John Pennycate, whose book
The Tunnels of Cu Chi
tells the real story of the tunnel rats of the Vietnam War.

Last, I would like to thank my family and friends for their encouragement and unqualified support. And, most of all, I am
indebted to my wife, Linda, whose belief and inspiration never waned.

The boy couldn’t see in the dark, but he didn’t need to. Experience and long practice told him it was good. Nice and even.
Smooth strokes, moving his whole arm while gently rolling his wrist. Keep the marble moving. No runs. Beautiful.

He heard the hiss of the escaping air and could sense the roll of the marble. They were sensations that were comforting to
him. The smell reminded him of the sock in his pocket and he thought about getting high. Maybe after, he decided. He didn’t
want to stop now, not until he had finished the tag with one uninterrupted stroke.

But then he stopped — when the sound of an engine was heard above the hiss of the spray can. He looked around but saw no light
save for the moon’s silvery white reflection on the reservoir and the dim bulb above the door of the pump house, which was
midway across the dam.

But the sound didn’t lie. There was an engine approaching. Sounded like a truck to the boy. And now he thought he could hear
the crunching of tires on the gravel access road that skirted the reservoir. Coming closer. Almost three in the morning and
someone was coming. Why? The boy stood up and threw the aerosol can over the fence toward the water. He heard it clunk down
in the brush, short of the mark. He pulled the sock from his pocket and decided just one quick blow to give himself balls.
He buried his nose in the sock and drew in heavily on the paint fumes. He rocked back on his heels, and his eyelids fluttered
involuntarily. He threw the sock over the fence.

The boy stood his motorbike up and wheeled it across the road, back toward the tall grass and the bottlebrush and pine trees
at the base of the hill. It was good cover, he thought, and he’d be able to see what was coming. The sound of the engine was
louder now. He was sure it was just a few seconds away, but he didn’t see the glow of headlights. This confused him. But it
was too late to run. He put the motorbike down in the tall brown grass and stilled the free-spinning front wheel with his
hand. Then he huddled down on the earth and waited for whatever and whoever was coming.

Harry Bosch could hear the helicopter up there, somewhere above the darkness, circling up in the light. Why didn’t it land?
Why didn’t it bring help? Harry was moving through a smoky, dark tunnel and his batteries were dying. The beam of the flashlight
grew weaker every yard he covered. He needed help. He needed to move faster. He needed to reach the end of the tunnel before
the light was gone and he was alone in the black. He heard the chopper make one more pass. Why didn’t it land? Where was the
help he needed? When the drone of the blades fluttered away again, he felt the terror build and he moved faster, crawling
on scraped and bloody knees, one hand holding the dim light up, the other pawing the ground to keep his balance. He did not
look back, for he knew the enemy was behind him in the black mist. Unseen, but there. And closing in.

He hadn’t. The call was not picked up and the ringing didn’t stop until after the required eight rounds. He absentmindedly
wondered where that tradition had come from. Why not six rings? Why not ten? He rubbed his eyes and looked around. He was
slumped in the living room chair again, the soft recliner that was the centerpiece of his meager furnishings. He thought of
it as his watch chair. This was a misnomer, however, because he slept in the chair often, even when he wasn’t on call.

Morning light cut through the crack in the curtains and slashed its mark across the bleached pine floor. He watched particles
of dust floating lazily in the light near the sliding glass door. The lamp on the table next to him was on, and the TV against
the wall, its sound very low, was broadcasting a Sunday-morning Jesus show. On the table next to the chair were the companions
of insomnia: playing cards, magazines, and paperback mystery novels — these only lightly thumbed and then discarded. There
was a crumpled pack of cigarettes on the table and three empty beer bottles — assorted brands that had once been members of
six-packs of their own tribe. Bosch was fully dressed, right down to a rumpled tie held to his white shirt by a silver 187
tie tack.

He reached his hand down to his belt and then around back to the area below his kidney. He waited. When the electronic pager
sounded he cut the annoying chirp off in a second. He pulled the device off his belt and looked at the number. He wasn’t surprised.
He pushed himself out of the chair, stretched, and popped the joints of his neck and back. He walked to the kitchen, where
the phone was on the counter. He wrote “Sunday, 8:53
A.M.
” in a notebook he took from his jacket pocket before dialing. After two rings a voice said, “Los Angeles Police Department,
Hollywood Division. This is Officer Pelch, how can I help you?”

Bosch said, “Somebody could die in the time it took to get all that out. Let me talk to the watch sergeant.”

Bosch found a fresh pack of cigarettes in a kitchen cabinet and got his first smoke of the day going. He rinsed dust out of
a glass and filled it with tap water, then took two aspirins out of a plastic bottle that was also in the cabinet. He was
swallowing the second when a sergeant named Crowley finally picked up.

“What, did I catch you in church? I rang your house. No answer.”

“Crowley, what have you got for me?”

“Well, I know we had you out last night on that TV thing. But you’re still catching. You and your partner. All weekend. So,
that means you got the DB up at Lake Hollywood. In a pipe up there. It’s on the access road to the Mul-holland Dam. You know
it?”

“I know the place. What else?”

“Patrol’s out. ME, SID notified. My people don’t know what they got, except a DB. Stiff’s about thirty feet into this pipe
there. They don’t want to go all the way in, mess up a possible crime scene, you know? I had ’em page your partner but he
hasn’t called in. No answer at his phone either. I thought maybe the two of you was together or something. Then I thought,
nah, he ain’t your style. And you ain’t his.”

“I’ll get ahold of him. If they didn’t go all the way in, how they know it’s a DB and not just some guy sleeping it off?”

“Oh, they went in a bit, you know, and reached in with a stick or something and poked around at the guy pretty good. Stiff
as a wedding night prick.”