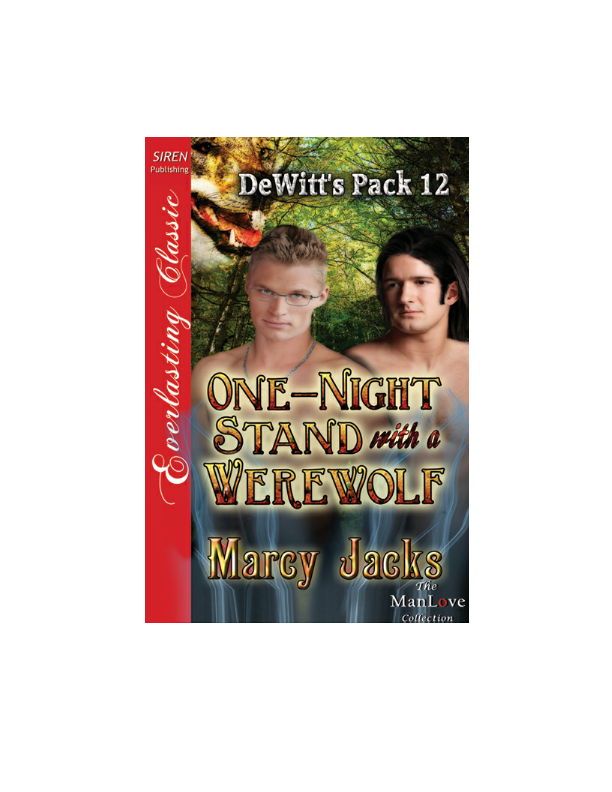 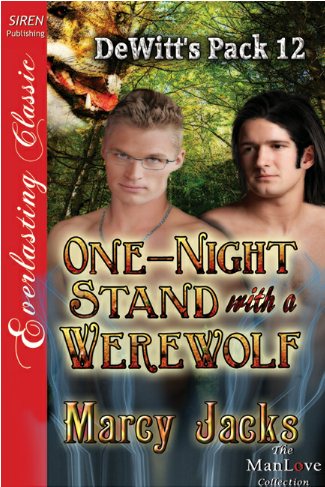 One-Night Stand with a Werewolf

Markus Lane was depressed when the man he loved mated with someone else. To take his mind away from the pain, he decides to take to bed the beautiful stranger he sees sitting in the bar behind him. Little did he realize that his one-night stand is actually his mate.

Lance Malloy is out to prove that werewolves exist. He's searched for that proof ever since he was a child and a shifter saved his life. That the gorgeous man who has been showing him all the best hiking trails is a werewolf, and claims they are mated, is the best news he's ever heard.

need to stay hidden, and when some of Lance's old colleagues But to protect his lover he must give up his research. The packs  turn out to be hunters, and they track him down and attack  DeWitt's pack, how will he ever get Markus to trust that he had no  hand in this betrayal?

ONE-NIGHT STAND WITH A

You do not have resell or distribution rights without the prior written permission of both the publisher and the copyright owner of this book.

This book cannot be copied in any format, sold, or otherwise transferred from your computer to another through upload to a file sharing peer to peer program, for free or for a fee, or as a prize in any contest.  Such action is illegal and in violation of the U.S. Copyright  Law. Distribution of this e-book, in whole or in part, online, offline, in print or in any way or any other method currently known or yet to be invented, is forbidden. If you do not want this book anymore, you must delete it from your computer.

ONE-NIGHT STAND WITH A WEREWOLF

All art and logo copyright © 2013 by Siren Publishing, Inc.

One-Night Stand with a Werewolf
by Marcy Jacks from BookStrand.com or its official distributors, thank you. Also, thank you for not sharing your copy of this book.

ONE-NIGHT STAND WITH A

Markus loved his pack. James DeWitt was a fair pack alpha who only rarely needed to assert his authority over unruly omegas or alphas who challenged him. He wasn’t a tyrant like Deacon had been, and Markus was fortunate enough to not have been born into that particular pack, though he had heard stories.

Lately, he found he couldn’t much handle being around his own home. Not since John had taken a mate. A werecat mate.

In some strange twist of fate, it seemed that almost every male in the pack was finding a mate in another male. Markus didn’t mind that in the least. He himself was attracted to other men. One man in

would be mated. Markus was attracted to his friend and had been for a

while. Just when he’d started to think that maybe John would return  his affections, but the other man had found himself mated to someone

Markus couldn’t blame the guy. It wasn’t as though Markus had some claim on him since they hadn’t been dating, had never fucked or kissed. The farthest things had gotten between them was talks.

They had spoken about how amazing it was for the other members of the pack to find mates with their own sex, and then there had come the hints, mostly from Markus, about how he would like to have something more with his friend.

Again, it had never gone beyond those innocent talks.

Then John met Storm, and everything ended for Markus.

The cougar-shifter was a former hunter. Yeah, they might have already gone through that with Isaac, but Isaac hadn’t had the nerve to mate with Markus’s best friend, so yeah, he was being a bit of a dick about it.

The first night that cougar spent on pack land, Markus had made sure to tell him what he would do to him if he ever hurt John.

you wish you were never born

was something along the lines of the

It had gotten to the point where his pack alpha was starting to get pissed at him for his attitude. Markus had been brought out on the front lawn of James DeWitt’s cottage once already and forcefully put down on his back with his neck exposed for mouthing off and just being a miserable prick in general.

Now Markus was sitting in an empty bar in Brampton, sulking and swinging back a couple of beers.

Getting put in his place in front of the entire pack, in front of John and his new mate, was embarrassing enough, but he wasn’t about to get wasted over it.

Werewolves were meant to avoid most human contact wherever

possible, but the problem was that it was not always possible.

One-Night Stand with a Werewolf

Werewolves had to do odd jobs here and there to bring in money, or go grocery shopping once in a while as opposed to hunting all year for their food.

Those were the unavoidable situations, however. Having a drink in the local pub was all right, too, but actually hanging out here like  Markus was doing wasn’t exactly allowed. Getting piss drunk would be even worse and grounds for exile from the pack.

Markus wasn’t quite ready to take it that far just yet. It didn’t stop him from ordering another beer when the bartender took his bottle

The guy didn’t speak to him, and for that Markus was glad as he

crossed his arms on the bar and hid his face in them.

Maybe he was a little closer to falling off the deep end than he thought he was.

The front door opened, and the bell above chimed. The stupid bar couldn’t be like a real bar, it was a restaurant, too, so it didn’t have

the dark, brooding atmosphere that Markus would have preferred. The  windows were high and bright, and everything just reeked of fun  family dining.

Thank God it wasn’t dinnertime yet and all the mothers and their  strollers hadn’t started packing into the place. That was the last thing  Markus needed.

“What can I getch’a?” asked the bartender. It was only Markus  and whoever the hell else had wandered inside, so with an empty  place and Markus already served, there was only one person he could  be asking.

The answering voice had that smoky, cigarette-sexy quality that  Markus had only ever heard on TV.

“Just a beer for now, thanks. Still looking through the menu.”

He told himself not to look up, not lift his miserable face from his  arms to see who owned that gorgeous voice.

He did it anyway, and he damned himself the second the  stranger’s blue eyes turned up from his menu, as though he’d sensed

eyes in him, and stared right back at Markus.

He turned around and cursed himself. Markus quickly got up from  his stool and walked toward the men’s room, practically slamming  through the door.

He peered at himself in the mirror, and it was just as bad as he  thought it would be.

That’s what happens when you don’t sleep and have beers for  breakfast.

It was ridiculous how much he cared about this, but everything in  that man’s face, everything in his scent, just screamed sex. Markus  wanted to grab the guy and pull him into the bathroom, drag him  inside one of the stalls, press him against the wall, and fuck him until  he moaned and thrashed so violently that his wire-rimmed glasses fell  from his face.

Uncle John's Bathroom Reader Attack of the Factoids by Bathroom Readers' Institute
Changes by Charles Colyott
Gray Ghost (The Bill Dix Detective Series Book 1) by Swinney, C.L.
Home Free by Sonnjea Blackwell
Find Me by Cait Jarrod
A Taste for Blood (The Godhunter, Book 6) by Sumida, Amy
On the Edge by Pamela Britton
The Chantic Bird by David Ireland
Bad Boy Christmas: Box Set by Cheyenne McCray
Irrational (Underneath it All Series: Book Two) (An Alpha Billionaire Romance) by Ava Claire
Our partner