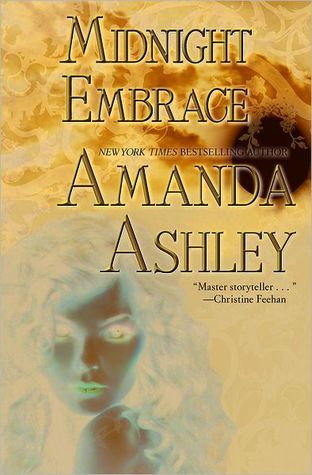 Other
Leisure
and
Love Spell
books by Amanda Ashley:

DEEPER THAN THE NIGHT

The name "Love Spell" and its logo are trademarks of Dorchester Publishing Co., Inc.

Visit us on the web at
www.dorchesterpub.com.

This book is dedicated to Beverly Clemence.

She was the first person to read one of my books.

She was the one who suggested I find a publisher.

Thanks, Beverly. If not for you, I'd probably still

be writing stories and hiding them under the bed.

In the darkness of the night

my angel comes to me

an angel, a nightmare

a love not meant to be

His kisses are edged

with a dark deadly fire

He speaks of forever

as his arms hold me tight

if I'll surrender the light

I whisper my fears

he kisses them away

my doubts he doth vanquish

He woos me so tenderly

how can I resist

all I desire can be mine

with one dark kiss

He prowled the moonlit streets and shadowed byways, driven by a relentless hunger and an overpowering need to help, to heal. It was who he was, what he had been born for, until Tzianne swept into his life and literally turned his days to night.

He thrust her memory away. He emptied his mind of all thought and listened to the heartbeat of the city, homing in on the one soul who had what he needed. Who needed what he had.

Gathering his cloak around him, he became one with the dark shadows of the night.

She was dying. She had always feared death, certain it would be accompanied by terrible unending pain and horror. But now, lying on a narrow bed in a darkened hospital room, with long fingers of silver moonlight making ever-changing patterns on the wall, she felt nothing but an overpowering weariness and a vague sense of curiosity about what came next. Was there truly life after death, a place of peace and rest without pain, as the priest had promised her? Or was there nothing beyond this life save an endless black void?

She felt herself slipping away, teetering on the brink of sleep, or perhaps the eternal abyss of death, when she felt it, a sudden coolness in the room, more a feeling than an actual physical chill, and with it the certain knowledge that she was no longer alone.

Fear came quickly, manifesting itself in the nervous shivers that wracked her body, in the sudden dampness of her palms.

"Who's there?" Filled with apprehension, she glanced nervously around the room. "Dr. Martinson? Is that you?"

He appeared out of the shadows, black against black, almost as if he were a part of the darkness itself.

"How are you feeling?" His voice was low, filled with a dark sensuality that sent a shiver of awareness down her spine.

"Who are you?" She huddled deeper into the blankets. "Where's my doctor? Where's Dr. Martinson?"

"The good doctor asked me to look in on you."

She stared up at the hooded stranger, her heart pounding as he moved closer to her bedside. He was tall and broad-shouldered beneath the fine black wool cloak that fell from his shoulders in graceful folds to the floor. She couldn't make out his features, only that his hair was long and dark, blending into the shadows around him.

"Are you a doctor?" she asked tremulously.

She shook her head, mesmerized by his eyes. They were blue, a deep, dark blue that seemed to be lit from within. Strange, she could see the color of his eyes when she could see little else.

He leaned toward her. She tried to look away, but it was impossible to take her gaze from his. She felt as though she were being drawn into the very depths of his eyes, until all she could see, all she was aware of, were his eyes. Blue, so very blue, like a fathomless indigo sea beneath a moonless night.

She felt his hand at her neck as he brushed her hair aside and then leaned over her. She felt a brief, sharp pain, as though something had bitten her. Moments later, his gaze captured hers once again.

"Drink, Lisa." She tried to look down, to see what it was he was offering her, but she could not draw her gaze from his face. Something thick and warm dripped into her mouth. "Drink."

Helpless to refuse, she did as he asked and was immediately filled with a sense of euphoria. Gone was the weakness that had plagued her, the weariness that had weighed her down, the coldness so deep inside her. Warmth flowed through her veins, strengthening her, making her feel as though she could leap from the bed, as if she could run. As if she could fly.

She didn't want to sleep, not now when she seemed filled with new life, but his voice wrapped around her, low and soothing and seductive. And completely irresistible.

She stared up at him, trying to see his face, trying to fight the sudden lethargy stealing over her limbs. She wanted to ask who he was, what he was, but a blackness as deep as eternity swept her away before she could form the words.

She woke to the singing of birds and the rattle of the milk wagon on the cobblestones below, woke feeling better than she had in weeks. Almost, she felt as if she could jump out of bed, walk, run. But it was only an illusion, she thought. She had heard too many tales of people lying at death's door who experienced a last, sudden burst of false energy.

Dr. Martinson frowned as he examined her later that morning. "I don't understand it," he murmured as he looked into her eyes, listened to her heartbeat. "How can this be?"

"What is it?" she asked, fearing that death was closer than she thought.

He shook his head. "Nothing." He smiled his fatherly smile at her and patted her hand. "Nothing for you to worry about, my dear. Get some rest."

But she didn't feel like resting. She grabbed hold of his sleeve as he turned away from the bed. "A strange doctor came to visit me last night," she said, still clutching his sleeve. "Who was he?"

Dr. Martinson's brow wrinkled. "A doctor, you say? I'm sure I don't know."

"But he said you sent him."

"I'm sure it was just a dream." He tugged his sleeve free of her grasp. "I'll see you later this evening."

She stared after him. Had it been a dream? But it had seemed so real. Overcome by a sense of disappointment, though she couldn't say why, she drew the covers up over her head and drifted off to sleep to dream of a tall, dark man in a hooded cloak the color of midnight.

The chill in the room awakened her, the same eerie coolness she had felt the night before. Clutching the blankets to her chin, she stared into the darkness. "Where are you? I know you're here."

A dark shape detached itself from the deep shadows of the room. Last night, she had fancied that he was a part of the darkness. On this night, she knew he was the darkness.

"Who are you?" she demanded, her voice thin and shaky. "What are you doing here? What do you want from me?"

A soft chuckle floated through the blackness toward her. "Only what I gave you last night. Only what you gave me in return."

"I gave you nothing." She took a deep breath, opened her mouth to scream for help, but he was suddenly at her side, his hand on her mouth stifling her cry.

"You don't want to do that." His voice was as low, as mesmerizing, as she remembered. "Did I hurt you last night, sweet Analisa?"

She stared up at him. How did he know her name? Who was he, this dark stranger with the compelling voice and mesmerizing eyes?

She shook her head, her heart pounding loudly, erratically. He hadn't hurt her, but there was something about him that frightened her. Something dark and intangible.

"I will not hurt you tonight."

She felt a wave of sweet relief wash over her as someone opened the door. Welcome light from the hallway spilled into her room. Thank goodness. Help was here. "Dr. Martinson! I'm so glad to see you!"

"Good evening, Analisa. How are you feeling?"

She stared at her doctor, waiting for him to question the stranger's presence in the room, but Dr. Martinson walked by the stranger as if there were no one there, though she could see him plainly. He was standing in the shadows, as still and silent as death.

"Who's that man?" Lifting her hand, she pointed a trembling finger toward the stranger.

The doctor glanced around the room, his brow furrowed. "What man?"

"You don't see him?" She looked at the stranger, then back at Dr. Martinson. "He's standing right there, by the window."

Dr. Martinson smiled indulgently. "You must have been dreaming again, my dear. There's no one else here."

She stared at the stranger while the doctor examined her, wondering if she was going insane. She saw the cloaked figure so clearly, but if the doctor could not see him, then surely there was no one there. Perhaps she was having delusions of some kind. She had been ill for so long, perhaps in her weakened state she could no longer discern fact from fantasy. But she didn't feel weak and sick today. She felt stronger this evening than she had in weeks. Perhaps the hooded man was Death come for her. Perhaps that was why only she could see him. Her grandmother had told her that Death rode a dark horse. She giggled softly. Of course, he couldn't ride his horse into her room.

Zepha the Monster Squid by Adam Blade
Songreaver by Andrew Hunter
An Island Christmas by Nancy Thayer
The Lover's Knot by O'Donohue, Clare
Planus by Blaise Cendrars
Gift Horse by Bonnie Bryant
The Woman of the Billionaire's Dreams by Lakes, Krista
Stand By Your Man by Susan Fox
How to Bake the Perfect Pecan Pie by Gina Henning
Black Spring by Alison Croggon
Our partner