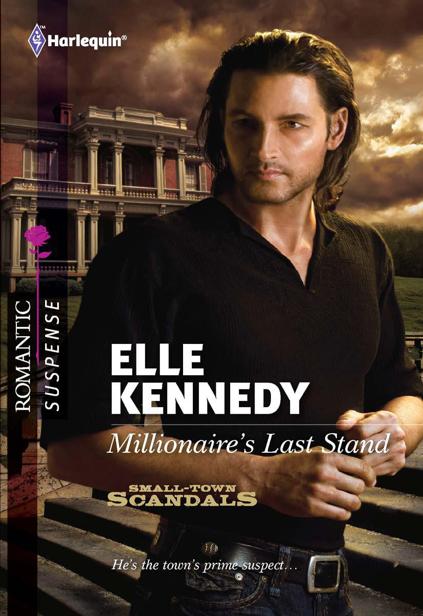 “I know we shouldn’t do this,” she murmured. “I spent my entire life working to make something of myself. And now here I am, about to throw it all away because you’re so darn attractive.”

His lips twitched in amusement.

“Nothing will come out of this, Jamie. I’m in no place for a relationship.”

The obstacles in their path were hard to ignore. But tonight, she wanted to pretend there was nothing in their way.

I’ve always wanted to live in a small town. I’ve lived in a city all my life, and for the most part, I really do like it. Toronto is cleaner and less crowded than many other big cities, it’s got a lot of beautiful buildings, tons of stores and shopping malls, a great lakefront, the CN Tower. But as much as I love it, I think I’d be more suited to small-town life.

Quaint shops, a town square, gorgeous old houses, a place where everyone knows your name… To me, it sounds like heaven, which is why I set this new two-book miniseries in the fictional town of Serenade. Alas, things aren’t so idyllic in this town. Cole is a millionaire accused of killing his ex-wife, Jamie is the FBI profiler there to question him. Throw in a killer on the loose and a forbidden attraction and this small town might be more exciting than most!

I hope you enjoy Cole and Jamie’s story, and make sure to look out for Finn’s story coming out in January. As always, I’d love to hear from you.

A RITA® Award-nominated author, Elle Kennedy grew up in the suburbs of Toronto, Ontario, and holds a B.A. in English from York University. From an early age, she knew she wanted to be a writer, and actively began pursuing that dream when she was a teenager. She loves strong heroines and sexy alpha heroes, and just enough heat and danger to keep things interesting.

Elle loves to hear from her readers. Visit her website, www.ellekennedy.com, for the latest news or to send her a note.

To Patience and Keyren,
for giving my millionaire hero a chance!

The call had come in on his cell phone, jolting him from restless slumber, and as he’d left his barren farmhouse and driven over, he hadn’t been able to fight the dread climbing up his chest. Now it was jammed in the back of his throat and refused to dislodge. An omen that his peaceful little town was about to become…well, not so peaceful anymore.

Patrick “Finn” Finnegan killed the engine of his Jeep and stared out the windshield at the commanding mansion up ahead. Situated on the edge of a rocky cliff, the house resembled a smaller version of a medieval castle. Rumor had it Cole Donovan had wanted to use wood to make the structure akin to the rustic homes that were trademark to the area, but his wife had demanded the house be made of stone.

Finn wasn’t surprised. Teresa Donovan always acted like a queen, so why not live as one?

A rap on the driver’s window jarred him from his thoughts. Finn looked up to see Anna Holt, his most dedicated deputy. Uneasiness swam in Anna’s astute brown eyes, the stiffness of her slim body hinting at what Finn expected to find inside the extravagant home.

“How bad is it?” he said in lieu of a greeting as he slid out of the driver’s seat.

The two of them walked up the limestone path leading to the pillared entrance of the mansion. They moved through the ornate double doors, which were filigreed with bronze and more suited to the entry of a cathedral than a home in North Carolina. Inside the spacious front hallway, a white marble floor stretched beneath Finn’s black boots, another incongruity considering the home’s granite exterior. Teresa Donovan had evidently opted for a show of wealth rather than consistency.

“She’s in here,” Anna said, gesturing to the arched doorway on their left.

As they crossed the threshold, Finn rubbed the stubble on his chin and cast a weary look across the lavishly furnished living room where his second deputy, Max Patton, stood by the enormous black slate fireplace, dusting the mantle and the framed photographs atop it for fingerprints. Finn’s gaze zeroed in on one particular photo, which showed a beaming Teresa in a wedding gown, flanked by a tall man with olive-colored skin and dark eyes.

Finn suppressed a groan. Damn it. This was the last thing his town needed. In the five years he’d served as the sheriff of Serenade, there hadn’t been a single murder. People simply didn’t get killed here.

With a sigh, Finn finally forced himself to focus on the main event, the lifeless body of Teresa Donovan.

Even in death she was a beautiful woman, with her black hair fanned out on the parquet floor like strands of fine silk. The wide-set eyes beneath her closed lids had once been stormy silver but he knew they were now a lifeless gray, and her skin, once milky-white, had a bluish tinge to it. She wore a wine-colored peignoir, short enough to reveal her firm lower thighs and shapely calves. She wasn’t a tall woman, but her flawless beauty had always made her seem larger than life.

So had her volatile personality.

“Got something under the fingernails” came the medical examiner’s nasal voice.

Finn frowned. “She scratched the guy?”

Len Kirsch shrugged, his wire-rimmed glasses sliding down the bridge of his long, thin nose. “Possibly. But you could wind up with skin cells under the fingernails from just caressing someone’s arm. I’ll examine the body more thoroughly at the lab to check for concrete defensive wounds.”

Another sigh lodged in Finn’s chest. Christ. Why did it have to be
this
woman? It would be hard finding even one person in town who’d liked Teresa. Hated her? Well, the numbers in that camp would make most of the town a suspect.

He stared at the neat little hole in Teresa’s nightie. Right in the heart. Someone hadn’t been screwing around here. The shot had been meant to kill.

He rose to his feet, while the lone forensics tech employed by the Serenade Police Department snapped photos of the scene. The rest of the living room was pristine. No overturned furniture, no hints of a struggle. The only sign of foul play was the body lying on the floor next to the brown leather couch, and the ominous pool of blood congealing on the hardwood.

Damn Cole Donovan. He’d caused nothing but trouble since moving to Finn’s town two years ago. Shut down the paper mill and built a hotel in its place. Married Serenade’s ultimate bad girl. Divorced her.

And quite conceivably killed her.

This was a quiet town. Serenade’s five thousand or so citizens were pleasant, hardworking people. They quietly lived their lives, they raised their families and attended the annual craft festival every August, they ran the quaint shops on Main Street and catered to the tourists that wandered into their picturesque town.

Cole Donovan wasn’t one of them. He was a big-city man. He’d built his real estate empire in Chicago, then taken it up and down the Atlantic Seaboard, developing in little towns that didn’t appreciate his interference.

With growing weariness Finn’s gaze was yet again drawn to Teresa’s body, and as he stared at the pool of sticky, crimson blood gathering next to it, only one thought entered his mind.

All hell is about to break loose.

“A
re you sure you don’t want me to stay?” Ian Macintosh asked, hesitating in the doorway of Cole Donovan’s isolated house.

“Go back to Chicago,” Cole answered with a sigh. He held up his hand before his assistant could object. “I’ll be fine, Ian. Worst thing the sheriff will do is arrest me.”

Ian’s face went cloudy. “I don’t know how you’re so calm about this, boss. If I were being wrongfully accused of something, I’d lash out at the entire damned department.” He flushed. “Don’t tell my mum I said that. She’s spent twenty-five years trying to instill good manners in me.”

Uh-oh, Ian must really be worried about him, if his British accent was flaring up. Cole had hired the kid on a business trip to London, during which Ian had pulled him aside at a conference and told him he wanted nothing more than to be a part of Donovan Enterprises. Cole had his reservations at first—the kid was barely out of college—but over the past five years, Ian had proven to be invaluable.

Which was why Cole needed him back in Chicago, overseeing everything at the company’s headquarters while Cole tried to put an end to this mess he’d found himself in.

Damn Teresa. Although a part of him was still reeling over the fact that his ex-wife was dead, there was also a small part that thought
good riddance.
That woman had caused him nothing but trouble over the past two years. She’d hurt him, humiliated him, cost him not only money, but pride.

And now she was gone, and Sheriff Finnegan lurked in the shadows with a pair of handcuffs, just waiting for the moment he could arrest Cole.

He stifled a groan, resisting the urge to pull out his own hair. He needed to squash this situation before it got completely out of hand. The papers had already gotten a whiff of the story, and the last thing he needed right now was negative publicity. Donovan Enterprises had taken a hit in the market thanks to the recession, and he couldn’t afford to have prospective developments fall through because Serenade’s sheriff had decided he was a killer.

“Make sure you contact Kurt Hanson when you get in,” Cole said as he followed Ian out onto the wraparound porch of the house. “Take him to dinner, pump him with wine and confidence. We can’t have him backing out of the waterfront deal.”

Ian busily keyed the instructions into his BlackBerry, efficient as always. He glanced up, his brown eyes grave. “And what about the Warner hotel? Kendra Warner decided to double the price on the property. Are we going to meet the new figure?”