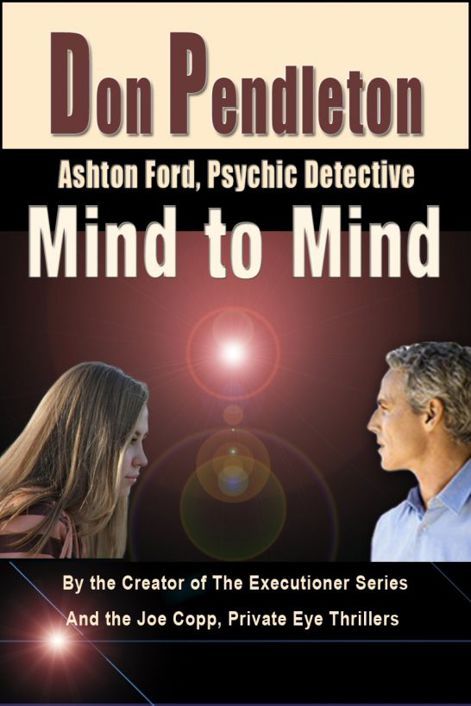 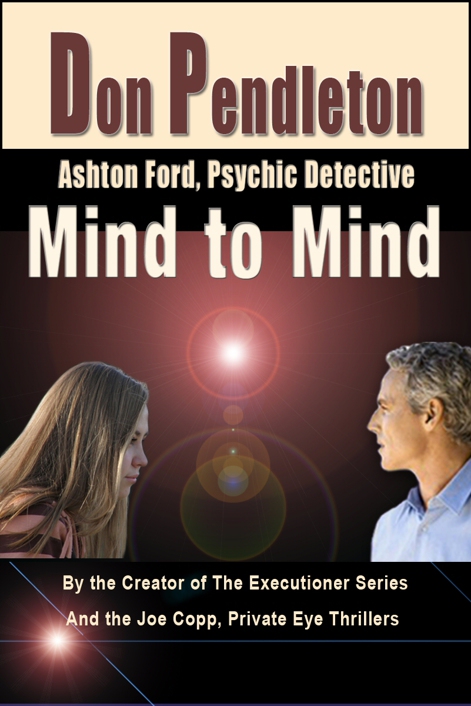 The Joe Copp Mystery
Series
:
Copp for
Hire; Copp on Fire; Copp in Deep; Copp in the Dark; Copp on Ice;
Copp in Shock.

The Ashton Ford Mystery
Series: Ashes to Ashes; Eye to Eye; Mind to Mind; Life to Life;
Heart to Heart; Time to Time.

Comics by Don and Linda
Pendleton

The Executioner, War Against
the Mafia

A Search for Meaning From
the Surface of a Small Planet

To Dance With
Angels

Whispers From the
Soul

The Metaphysics of the
Novel

Copyright © 1987 by Don
Pendleton, All rights reserved. Published with permission of Linda
Pendleton.

This is a work of fiction.
Any similarity to actual persons, groups, organizations, or events
is not intended and is entirely coincidental.

No part of this book may be
reproduced or transmitted in any form or by any means, graphic,
electronic, or mechanical, including photocopying, recording,
taping, or by any information storage retrieval system, without the
written permission of Linda Pendleton.

This edition is licensed for
your personal enjoyment only. This ebook may not be re-sold or
given away to other people. If you would like to share this book
with another person, please purchase an additional copy for each
person. If you are reading this book and did not purchase it, or it
was not purchased for your use only, then please return to
Smashwords.com and purchase your own copy. Thank you for respecting
the hard work and rights of the author.

Copp in the Dark

Executioner: War Against the Mafia,
Comic

A Search for Meaning

To Dance With Angels

Whispers From the Soul

Metaphysics of the Novel

For Linda, who gave me the
title in an airport, and whose mind touches mine every day in all
the gentle ways.

The conscious mind may be
compared

to a fountain playing in the
sun

and falling back into the
great

subterranean pool of the
subconscious

from which it
rises.

Ashton Ford will come as
something of a surprise to those of you who have been with me over
the years. This is not the same type of fiction that established my
success as a novelist; Ford is not a gutbuster and he is not trying
to save the world from anything but its own confusion. There are no
grenade launchers or rockets to solve his problems and he is more
of a lover than a fighter.

Some have wondered why I
was silent for so many years; some will now also wonder why I have
returned in such altered form. The truth is that I had said all I
had to say about that other aspect of life. I have grown, I hope,
both as a person and as a writer, and I needed another vehicle to
carry the creative quest. Ashton Ford is that vehicle. Through this
character I attempt to understand more fully and to give better
meaning to my perceptions of what is going on here on Planet Earth,
and the greatest mystery of all the mysteries: the
why
of existence
itself.

Through Ford I use
everything I can reach in the total knowledge of mankind to
elaborate this mystery and to arm my characters for the quest. I
try to entertain myself with their adventures, hoping that what
entertains me may also entertain others—so these books, like life
itself, are not all grim purpose and trembling truths. They are fun
to write; for some they will be fun to read. To each of those I
dedicate the work.

Chapter One: In the
Silence

It was an eerie piece of business. This "Jane
Doe" was very pretty, apparently in her late twenties to early
thirties, very alert and responsive. I was convinced that she knew
who she was and where she was—and why she was the way she was—but
there was no way for her to communicate any of that. This Jane Doe,
you see, had only half a brain. The left hemisphere of her cerebral
cortex had been surgically removed after suffering massive damage
when someone had literally tried to beat her brains out with a
crowbar. The right side of her body was totally paralyzed. Not only
was there no movement possible on that side, there was also no
feeling and apparently no mental awareness of the right arm and
leg; she did not even recognize them as her own. She was
responsive to voices and other sounds but possessed virtually no
language capability. The eyes, though alert and expressive,
remained extremely deviated to the left; to maintain eye contact I
had to keep myself positioned to her left side, but she seemed
unaware of the problem.

My friend Jim Cochran had
asked me to drop in and see the lady. Jim is a cop. He was in
charge of the case for LAPD. Six weeks had passed since the attack
on this young woman. She was fully recovered from the surgery—as
"recovered" as anyone expected her to get—but she remained
unidentified, and Jim did not know even where to begin his
investigation. The nude, savagely battered victim had been
discovered beside the Hollywood Freeway, obviously dumped there
after the attack and thought to be dead. The weapon, a heavy
crowbar, was found a few feet away. Photographs of the victim had
been circulated nationwide. No one had come forward to identify
her, and apparently she was unable to identify herself.

I had worked with the police before—missing
persons and homicide cases—with pretty good success. At such times
I am usually referred to as a "psychic consultant," though really I
am not at all sure what it is I do. I was trained for intelligence
work by the U.S. Navy. I also have played around with various
mental disciplines over the years, and I have had an active
interest all my life in philosophy and psychology in general,
metaphysics in particular, and I have a pretty good grounding in
the theoretical sciences. So I don't really know what the hell I do
with my head in cases like this one.

I guess what I do, basically, is simply to
expose myself to the problem—whatever it is—and flow with the
reaction. Maybe it is psychic. Just don't confuse me with Mandrake
the Magician.

Anyway, I went to see Jim
Cochran's "Jane Doe"—and what I did with my head, that time, was
next to nothing. I mentioned the eeriness of the encounter, but
there was more to it than that. I felt damn near overwhelmed by
this young woman's misfortune. And mad. Yeah. I felt mad as hell. I
know, I know—a "professional" is not supposed to get emotionally
involved with his subject. But this woman had really been wasted,
and very savagely so. Maybe I am just not professional enough,
because I cannot handle this sort of thing with cold
detachment.

Consider her situation and put yourself
there if you can. You can think and you can remember. You can smell
the flowers outside your window and see the birds flying past. You
can feel joy and anger, love and fear—but all those experiences and
all those feelings must remain forever locked inside your damaged
head because you have no way to think with words.

Words ... yes, how
important are words to that unique consciousness that we identify
with the human experience. Most all of man that is peculiarly man
was arrived at through the gift of language. Take away the gift and
what is left of the man? Take away the words and the ability to
reason mathematically and what is left of science? Without science,
what is technology? Without technology, what is a
civilization?

And what, dear God, was left of Jane Doe?
Though she could cuss with anger and frustration, hum a tune, even
sing a nursery rhyme with pretty fair diction, she could not
summon the sound of her own name. She could draw a crude picture
of her home but find no clue to the street address or city or even
nation.

The problem, you see, was
that Jane Doe was left with only a "subconscious" mind. That is
what we have always called it, anyway. Lately we have heard it
called "the right brain." And that is what Jane was left with. The
right brain, in most people, provides that part of the human
personality that deals in creativity, emotion, feelings, visual
images, intuition. It does not deal with language or mathematics,
not after the age of about five or six when the process called
"specialization" seats the objective faculties in the left
hemisphere.

If Jane Doe's misfortune
had occurred when she was five years old, the right hemisphere
would have gone on to develop on its own all the left hemisphere
functions, and she would have grown up entirely normal. But for a
calamity of this nature to befall a mature person ... well, that
half a brain is exactly that, half a brain, incapable of
reconstituting itself into a fully functioning organ of human
consciousness.

This was the eerie part, I guess. I had the
same feeling once at the San Diego Zoo while locked in a staring
match with one of the gorillas. The old fellow was looking me
straight in the eye, and I had the strongest feeling that we were
communicating somehow; that a mind-to-mind transfer was happening
there. It shook me. I still think about the experience from time to
time.

My Wife's Li'l Secret by Eve Rabi
The Pink and the Grey by Anthony Camber
Full Circle by Lisa Marie Davis
All Fishermen Are Liars by John Gierach
Christmas at Candlebark Farm by Michelle Douglas
In Search of Bisco by Erskine Caldwell
Radiant Days by Elizabeth Hand
Tall, Dark and Kilted by Allie MacKay
Playing Passion's Game by Lesley Davis
Reeve (The Phoenix Boys #3) by Amy Davies
Our partner