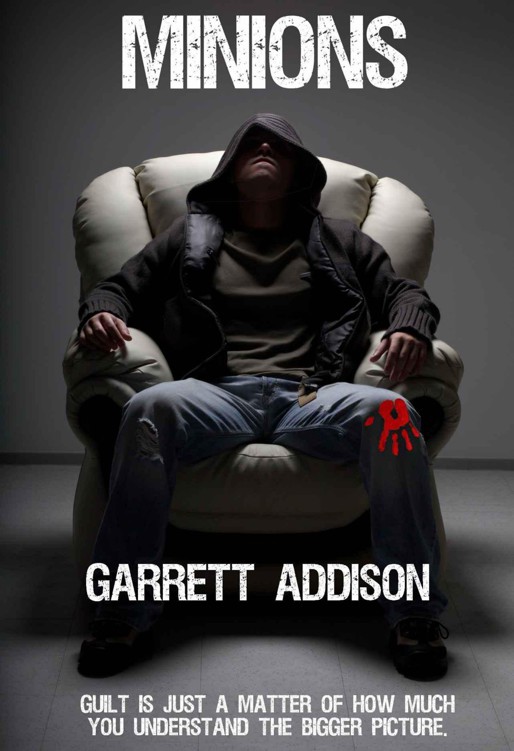 This is a work of fiction.  All characters appearing in
this work are fictitious.  Any resemblance to real persons, living or dead, is
purely coincidental.

‘Do not fear the devil and all his
minions’ - Anonymous

Devlin Bennett rifled through his backpack with each
person who strode past as he sat in a small, mid-Melbourne park.  He wasn’t
really looking for anything, but what was important in his ruse was that his
eyes were cast downward in an effort to prolong his anonymity.

No matter how he looked at it, his day had not gone as
he’d hoped.  While he wasn’t so naïve as to expect his life would return to
normal immediately, he expected at least something from people he knew.  A long
time ago he could have described them as friends, but now apparently they were
no more than acquaintances.  Of the five people he’d planned to meet today, two
wouldn’t even speak with him, two met him only to say they couldn’t, and
perhaps more correctly
wouldn’t
help, and the last wanted to add a
little physical assault to the rejection.

For now though, sitting on a small grassed area in a
mid-city park allowed him to participate in the world without being noticed.  It
was just what he needed.  His scan of the newspaper didn’t feature his
photograph, which was both a blessing and a curse, but his notoriety would mean
he was sure to be recognised eventually.  Moving interstate and staying
overnight in some suburban rat-hole might have bought him a day’s grace, but he
couldn’t escape from the inevitable.  He was sure to be identified sooner or
later and his bruised ribs were too sore to face any confrontation that would
require him to thrust his chest out to demonstrate whatever self-assurance
remained.

It didn’t take him long to summarise his situation; it was
mid-afternoon, he was out of people he knew to try for a job, and he was down
to small change in his pocket.  His predicament wasn’t ideal but he tried to
keep positive.  If nothing else he was well dressed in his court-room suit and
he had his iPod.  At least his attitude was far from beaten.

He recalled the simplicity of his hope to make a clean
start, quietly confident that a job wasn’t going to be too hard to find.  He
remembered actually stressing over whether to be picky, aim high and accept
low, or take anything.  If only he could get that chance.  He hoped he wouldn’t
need to relocate again, but perhaps this too was unavoidable.

He looked at his phone willing it to ring, but he’d not
had the chance to pass on the number to anyone so the odds if it ringing were decidedly
remote.  Then again, that it might ring was arguably more stressful.  It almost
warranted turning the phone off, but he couldn’t bring himself to do it.

Amid his current stresses there remained something
therapeutic about the dappled sunlight through the trees with a slight breeze.
Eyes closed, relaxed and distracted, he failed to notice the approach of a
hooded individual behind him.

It only took a second, but in one movement the previously
unseen youth closed the last few steps, grabbed his phone and sprinted away.
Instinctively, Devlin leapt to his feet in an effort to give chase, but he
quickly appreciated the futility of any pursuit.  He also accepted it was just
a phone and not a particularly good one, and that doing anything would only
draw attention to himself.  He gave up before he began.

Devlin swore out of frustration and anger.  Now devoid of
any means of being contacted, there was little point in even reporting the
incident when he didn’t even have a contact address.  He felt the heavy blow to
his morale; his glass previously half full was now decidedly empty.

Desperate for options, he flitted through his wallet,
naively hopeful of unearthing a previously hidden cash reserve but all he found
was an otherwise forgotten business card.  He picked up the card and fumbled it
between his fingers, the action prompting him to remember its source.  Glen.  He
thought of the man he’d met earlier on the train and his offer, even if it was
invariably only made to be polite.  “
Let me know how you get on
,” he’d
said.  He had nothing to lose.  At worst, the guy could only hang up, but then
again, there was even a possibility that the guy would give him a break.

He considered making a nervous call when it struck him
that Glen’s address was also on his business card and within walking distance.
Sure, a call might save him another assault but it wouldn’t allow him to assert
his innocence in person, if it came to that.  The fact that coinage for the call
was going to bite deeply into his remaining cash was the clincher.  He grabbed
his backpack and set off.

Nebojsa Kendic made no effort to hide what he thought of
all those around him in the conference room.  He wasn’t there to be nice to
these people, these insects, that was why his employer had asked him to be
present.  Internally described as their ‘big gun’ and externally as the ‘attack
dog’, everyone knew he was there to push his cause over the line, whatever the
cost.  The net effect was the same; he would have
his
effect on people.
It suited him perfectly.

He smiled at the very thought that he was now in demand.
The contrast with before he’d come to this country justified his lapse into
recollection.  He missed the old days, not so much the people, but definitely the
opportunities where under the pretence of ethnicity he could do many things.
For this very reason, he enjoyed his time during the war immensely.  He didn’t
need to pretend to have any social conscience, just as he didn’t need to hide
what drove him.  He didn’t need to consider the enemy people, though none of his
peers did either, and through this common interest it was possibly the first
time that he ever really mixed well with others.  The truth, however, was that what
he was, what he did, was not the result of some nationalistic fervour or pack
mentality.  Nebojsa was born the way he was, and he was simply fortunate to be
born in a place and a time when his particular qualities would be well
regarded.

That all good things come to an end was a problem.  As the
end of the war approached, there was a time when he actually worried for the
future.  He wasn’t important enough to be indictable for any
alleged
war
crimes, and a distinct lack of witnesses alive and so able to come forward was
in his favour.  It also helped that his efforts were typically on a smaller scale
than the incidents that seemed to attract wider attention.

His time waiting for asylum to be processed was very
trying.  Forced into close co-habitation with others he was perpetually on
edge.  Worse still were the stories that others incarcerated with him felt
necessary to share.  He shelved his want to kill them like the scum that they
were and focussed on using the time to his advantage.  He listened intently,
said nothing, and even taught himself to shed a tear at will.  His efforts were
noticed, just as he’d planned.  That he kept to himself and was seen to cry
regularly spoke volumes to the staff watching over them in their caged
confines.  They bandied terms like ‘Post Traumatic Stress’ and by simple
analysis of geography managed to glean that he was simply too scarred.  The
fact that his home town was currently being investigated as the site of a
massed cleansing helped him no end.  There was no-one alive to challenge him,
so who would argue at his assertion that he was alive only for the fact that
he’d left the village days before the arrival of the squads.  There was some
truth in this in that he’d visited his family there, sure.  But his family
couldn’t believe that their son was an active participant in the madness of the
war.  In that sense, he was, and wasn’t, in equal measure.  That his parents’
bodies were found in their home, rather than needing to be identified from
limited dental records after exhumation was testimony to the real fortunes of
war.

Fortune continued to favour Nebojsa.  Queued for
psychoanalysis by the woman they variously called the ‘pijan’, the drunk, one
day she called in sick.  The following day, probably with only a marginally
lower blood alcohol level, her records incorrectly noted that he had been
processed without raising any red flags.  The final hurdle in his migration was
easier than he expected.

Now surrounded by natives of his new home, he remembered
the anxiety he felt at the prospect of becoming like those around him.  He
didn’t want his relocation to be the start of his demise, such that in years to
come he’d look back and wonder what he’d become.  Far from his homeland, he
made a decision that his new setting would be the making of him, and that he
would better himself thereafter.  As a new migrant, he appreciated that he was
expected to take one of two paths; assimilate, implicitly turning his back on
his past, or join the sub-cultural enclaves of his homeland.  Nebojsa chose
neither.  He didn’t align himself to those with whom he shared a common
language, because they were never ‘
his
’ people and they meant nothing to
him.  He wasn’t prepared to deny his history either; his history helped make
him who he was.  Who he is.

When Devlin got to the address on the card his first
reaction was to stress that he’d been misled by the corner store owner he’d
asked for directions en-route.  Simple logic however calmed him; he had the
right street and the right suburb; he had the right address.

Glen’s office was a pair of non-descript, single-fronted,
double storied, Victorian shopfronts.  On either side was a brothel, or Devlin
assumed they were brothels on account of the large recessed entrances covered
by closed circuit security cameras.  Of course the business names were dead
giveaways.  The brothels and Glen’s office, intentionally or otherwise,
appeared to be the centrepiece of the street, like two feature clocks on a
mantelpiece with a small, plain knick-knack between them.

On closer examination, Devlin thought the building could
just as likely have been a private residence or a business.  There was no
signage to indicate it was a professional venue and the more Devlin looked, the
more feasible it seemed that it could be part of the brothel complexes.  He suddenly
felt as if he’d just been let in on a joke.
Surely, Glen was all above
board
.  He might have been down, but he certainly wasn’t out and while he’d
convinced himself that he would probably take any job, he didn’t want to have
to confront
that
kind of job.  He knew he could always walk away, but
hoped that it wouldn’t come to that.