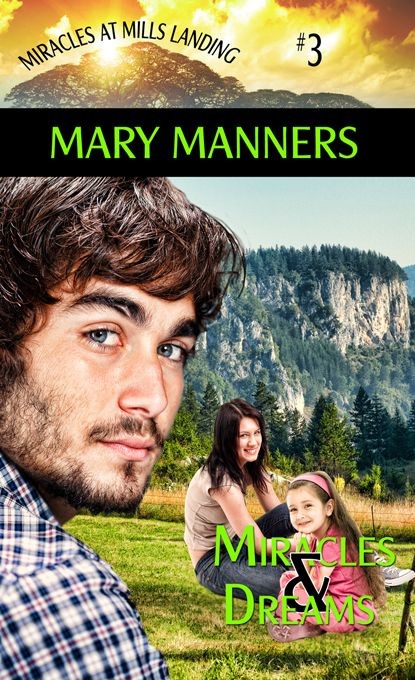 Other Titles by Mary Manners

This is a work of fiction. Names, characters, places, and incidents either are the product of the author’s imagination or are used fictitiously, and any resemblance to actual persons living or dead, business establishments, events, or locales, is entirely coincidental.

To June Keebler Stahlke...gone but not forgotten.

Other Titles by Mary Manners

Mary Manners is one of those authors...I know that I will always love and enjoy any of her books. ~ Paula Phillips on
Wounded Faith

Between the beautiful view she paints with her opening words and the emotional turmoil in the hero's heart, Ms. Manners drew me into this story from the start. ~ Donna Basinow on
Lesson in Lone Creek

Manners spins a tale of second chances, tender love, and family relationships that touch the soul.

Faith and love can get you through anything. That is the message that is woven throughout Mended Heart. An engaging couple and vibrant supporting cast are the star players in this tale of two people finding peace...and each other. ~ The Romance Reviews on
Mended Heart

This book is “unputdownable” as it's believable and loveable characters leap from the pages. Ms. Manners conveys a rich depth of emotion on each page, going from laughter to tears to heart stopping moments almost effortlessly. ~ Clare Revell on
Buried Treasures

Put your hope in the Lord. For with the Lord is unfailing love and with Him is full redemption.

The grinding whirr of landscaping trucks filled with rich, black mulch was a heartbeat to Jack Seaton’s soul. Loose soil, rich and musky with the scent of recent rain, made his blood rush with adrenaline. Nothing compared with the awakening that coursed through his veins as he watched the expanse of earth transform from bare to beautiful. Under his attentive eye and careful planning, where rocks once scattered there now breathed a community of upscale townhomes with a majestic mountain backdrop.

As trucks dumped mulch at the elaborate river-rock entrance sign, complete with working waterfall and a parade of crimson knock-out roses, Jack knew that nothing in life had ever—or would ever—trump the soaring feeling that overtook him.

Except for what he’d once experienced with Misty Larson. That had been an adrenaline rush/two-step swathed beneath the glow of a few months’ worth of full moons. But that dance, and the emotions that accompanied it, had ended more than half-a-decade ago—a lifetime ago—and were better left in the past. Jack had tucked away the memories along with the scent of Misty’s peaches and vanilla perfume and the melody of her laughter. She’d hurt him to the core…betrayed him in the worst possible way, and he couldn’t possibly forgive her—not ever.

“Hey, boss.” Mike, the stout senior foreman, loped over carrying an armload of letters. “I got mail call here, and today it’s a doozie.”

“That’s a load.” Jack grimaced at the mountain of bundled paper. So much for indulging in an early knock-off that afternoon. “It will probably take me hours to sort through.” He sighed and scratched the stubble that smattered his chin. No point in shaving to come to the job site. He’d spend the day on the phone or buried beneath a landslide of paperwork. “Toss it all on my desk. I’ll get to it later, when the landscapers are finished at the entrance.”

“This letter arrived special delivery. I had to sign for it.” Mike handed Jack a crisp manila envelope, the address personally hand lettered. It was a bit bulky, with the outline of a second envelope—or perhaps a square of cardboard—tucked inside. “It’s different from the rest—smells a bit odd, like a hint of sweet perfume. You got something going on, boss?”

“Nope.” The question, coming from anyone but Mike, would have offended Jack. But, after five-plus years working together, the two had forged a friendship that went beyond the jobsite. Mike was a stand-up guy whom Jack knew he could count on in any situation. “Nothing but a date with my pillow.”

“If you say so.” Mike shrugged and slapped the letter against his thigh before offering it up. “But, you might want to take a look.”

“Thanks.” Jack took the letter, distracted as one of the trucks inched dangerously close to a drop-off across the road. The driver was new and flirting with disaster. The road department had yet to come out and place guard rails. Jack had that at the top of the day’s To-Do list: hound the road department. The rails would have to come in before any of the new owners arrived.

Jack tucked the envelope into the pocket of his flannel shirt and started across the work field, motioning Mike to follow. “Do you see that drop-off at the entrance?”

“Sure do, boss.” Mike nodded as he fell into step. “Hard to miss that one.”

“Grab the specs and let’s take a look-see.” Jack lifted a hand to shield his eyes from the glaring sun. “It’s shaping up to be a problem.”

Misty glanced at the clock on the wall above the kitchen doorway and grimaced. She was due to fetch Allie from school in half-an-hour. Where had the day gone?

The laptop’s screen mocked her with a flash of graphics. She pushed away from the table and leaned back in the chair, rubbing exhaustion from her weary eyes. This project was proving to be a bear, and doubt crept in that she’d manage to finish by the deadline she’d promised the client.

But, she had to finish. Her future—and Allie’s—depended on it. Spence Tucker, the new director of the expanding Mill’s Landing Parks and Rec department, could open doors Misty had only dreamed of crossing through.

If she nailed this job—on time.

Misty sighed and rolled kinks from her neck before slipping from the chair and padding over to the sink. One of the fringe benefits of managing her own Web-design agency was the ability to work from home…in her stocking feet and with her uncombed hair swept into a messy ponytail. Jeans and a T-shirt were optional—some work days slipped away before she even changed out of her pajamas or donned a hint of make-up.

Today was the exception. She’d dropped Allie at school, and then taken an early jog along the Landing to get the creative juices flowing. Inspiration had flared by the time she indulged in a quick shower. A trip down the electronic highway followed.

Until she hit a roadblock at the first turn. The photos Spence Tucker had sent were all wrong, and the layout left gaps. She needed more—better—soon.

Ugh.
She refilled her coffee cup, added a splash of French-vanilla creamer, and took a moment to gaze through the bay window that swaddled the modest breakfast nook. Sunlight spilled across the yard beyond, spotlighting toys peeking through blades of grass that cried out to be mowed. The lawn would have to wait until tomorrow—she’d promised Allie a trip to the park after school. It would give her a chance to snap more photos of the walking trail and landscaping just coming into bloom. The trail snaked around the park and through the Landing. With a little luck, she’d capture the beauty she yearned to express through the Parks and Rec Website.

She fingered the buttons on the oversized flannel shirt she wore over a scoop-necked navy T-shirt. Patches of baby blue and soft yellow had faded from hundreds of washings, and one of the cuffs was missing its buttons. She wondered now why she hadn’t thrown it out—or burned it—years ago. The fabric, if she imagined hard enough, still carried the faint, wood-spice scent of Jack’s aftershave. Cotton caressed her pale skin like a gentle hug, just as Jack once had—before the breakup.

Maybe she kept the shirt—and still occasionally wore it—because of Allie. Despite the heartaches that Jack Seaton had caused, he’d given her Allie. Misty would be forever thankful to him for the gift of her daughter.

Misty glanced at a photo of Allie she’d tacked to the fridge. The child had Jack’s eyes…a swirl of wolf-gray with flecks of stonewashed blue that danced with a hint of mischief. Her rich black hair held Jack’s thick and wavy texture, as well. Misty was helpless when it came to restraining the mass with bows or elastic bands. She’d considered cutting it, but Allie loved the long locks. So, a headband worked best, Misty had learned through trial and error, and Allie had an arsenal to choose from.

Misty tore her gaze from the photo and her mind from the memories. She took a final sip of tepid coffee and then dumped what was left down the sink drain. The screensaver popped on, and a cluster of willows danced in a breeze, their shadows reflected along the water’s edge. Misty longed to be in the cool shade of the trees down at the Landing.

She forced the thought away and tried not to remember how she’d once waited there—foolishly—for Jack to come for her.

Now there was way too much on her plate to waste time reminiscing—or wishing for something that was not meant to be. She’d moved on a long time ago.

Disgusted with the thought, Misty gave the computer screen one last glance before closing the laptop. After jotting a few quick notes on a legal pad beside the computer, she tossed the pencil onto the table. The project could wait for later tonight—after Allie was in bed. Maybe then, her mind would be clear of Jack Seaton…and the nagging feeling that, despite all her blessings, something important in her life was missing.

Misty grinned as Allie burst through the front doors of Mill’s Landing Elementary School and raced across the manicured lawn toward the car. Her dark hair, which had escaped the ponytail Misty had painstakingly gathered it into that morning, whipped in the breeze like an unruly black wave. But she still had the headband—at least there was that. Her eyes crinkled cheerfully at the corners just like Jack’s had while he discussed his dream of managing a construction firm one day.

Death of a Rug Lord by Tamar Myers
Beginner's Luck by Richard Laymon
Air Blast by Steve Skidmore
Buried in a Bog by Sheila Connolly
Carl Sagan’s Hunt for Intelligent Life in the Universe by C. Gockel
Child of Darkness by V. C. Andrews
Red Widow (Vivian Xu, Book 1) by Nathan Wilson
Nothing But the Truth by Justina Chen
The Enforcer by Worrell, Nikki
William Wyler by Gabriel Miller
Our partner