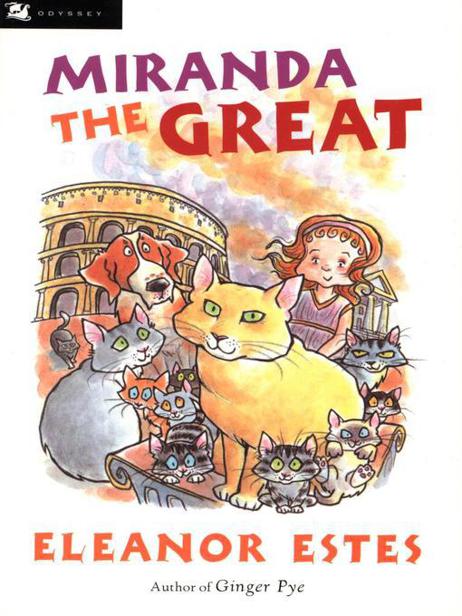 With illustrations by Edward Ardizzone

All rights reserved. No part of this publication may be reproduced or transmitted
in any form or by any means, electronic or mechanical, including photocopy,
recording, or any information storage and retrieval system,
without permission in writing from the publisher.

Requests for permission to make copies of any part of the work should be
mailed to the following address: Permissions Department, Harcourt, Inc.,
6277 Sea Harbor Drive, Orlando, Florida 32887-6777.

10
MIRANDA THE GREAT,
QUEEN OF THE COLOSSEUM
76

In Rome, long, long ago, there lived a gold-colored cat named Miranda. She was two and one half years old, and so far she had had two sets of kittens. Her silvery gray daughter, Punka, one of her first kittens and her favorite, lived with her still. Up to now, Miranda's life had been happy and calm, chasing butterflies, bees, and little yellow birds, watching her reflection in the pool, waiting patiently for a raindrop to fall from a leaf, and minding her kittens, for she was a good mother.

Miranda was a good singer, too, and often sang in the nighttime of these happy days. She lived with a little girl named Claudia, who was seven. Claudia had had Miranda since she was a tiny kitten and had watched her grow, holding her in her lap and giving her drops of goat's milk to make her big and strong. This did make Miranda big and strong, and her kittens had all been big and strong also.

Claudia's friends called Miranda and Punka "giant cats." "Why, they are colossal!" they exclaimed. Punka, though more than a year younger, was even larger than her mother.

"She is the little one!" Claudia would say, delighting in her friends' confusion.

Claudia and her family lived in a pretty golden marble house, not far from the Colosseum in Rome. Claudia's mother was named Lavinia, and sometimes she played the lyre. Both cats loved music. Punka would roll over on her back and blissfully close her eyes and purr
when Lavinia played. Once she had plucked a string of the lyre herself and made a sound, which proved how musical she was. However, she could not sing. "Wah!" was her only note. A bee had once stung Punka on her nose and on her throat, and this had ruined her singing forevermore, giving her voice its gritty sound.

Claudia's father, Marcus, was a senator in the Roman Forum. Before this, he had been a mighty soldier in the army and had fought in Spain. It was there that Marcus had found Zag, their great and wise dog. He had rescued the tiny, trembling brown-and-white puppy, a spaniel, from the fierce cats of Barcelona and had carried her, held snugly under his tunic, across the Pyrenees and across the plains and all the way home to Rome.

Naturally, for Zag, the world revolved around her rescuer, Marcus. When Marcus was at the Senate, Zag lay gloomily at the garden gate, her head pointing toward the Forum, her mouth in a mournful droop while she waited for him to come back. Miranda sometimes washed Zag's face to cheer her up. Zag's groans as she endured this motherly attention were varied and expressive and had earned her the nickname,
"the talking dog." She talked also when she wanted some of the food the others were eating. She talked to Marcus, reproaching him for being late, when at last he would come home, fling off his toga, stomp around the garden pool, and exclaim, "'They're coming!' I say to them in the Senate. 'I've said it before, and I say it again! The barbarians are coming! Get ready! Go forth and stop the hordes,' I say, 'or they will sack the city,' I say. 'Rome!' Do they heed me? No! They do not. They flock to the Colosseum instead to watch the games ... ts!" Marcus would shout, and he would fling himself into the pool and have a good splashing swim.

Miranda and Punka always raced to the flower garden, shaking their heads as though they had gotten a drop of water on them, and hid from the noisy man. But Zag would join her master in the bath, try to lick his face and his beard, swim with him, and catch a ball.

Then, shivering happily, Zag would shake herself and lie in the sun near the garden wall under a pretty tile mosaic that had a picture of a fierce dog on it and the words, "
Cave canem.
"

Beware the dog! Marcus had put this tile in the garden wall as a joke, for Zag had never bitten anybody. She never even chased cats. Miranda had to do it all, chase dogs, chase cats, be the brave one, mind Punka, mind Zag.

Once last winter, after a terrible and unusual snowstorm, Miranda had chased sixteen dogs off their street. They were trotting along happily through the deep and snowy ravine in the middle of the street where men and animals had worn a path. Suddenly Miranda had leaped into the ravine and chased the sixteen dogs away. None of them had the courage to turn around and fight the fierce and terrible cat. Their flight was a disgrace to the dogs of Rome and one of the first of Miranda's great triumphs.

"You are a great cat," Zag had said to her admiringly.

And no cat was allowed on her street either. The cats of Rome knew this by now. However, there had been one cat who came in the night. This was the great and awful lizard cat with the broken tail who had come from Barcelona in Spain to Rome. He had been driven out of
Barcelona by the terrible rooftop cats there because of his tyrannical ways. He had made his own way over the high Pyrenees, not snuggled up closely to some warm human under a warm toga as Zag had been. But by himself, all by himself, he had come to Rome, and he sang in the nighttime of his wanderings. Sometimes Miranda joined in the singing, and these duets were her first great singing. However, she told him he must stay off her street, to come no nearer than the high wall at the end of the alleyway behind their house and to sing there.

All cats minded Miranda and did what she said.

The Book of Other People by Zadie Smith
Dangerous Deceptions by Sarah Zettel
Complicit by Nicci French
Twisted Ones by Packer, Vin
As The Crow Flies (The DI Nick Dixon Crime Series) by Boyd, Damien
Exodus of the Xandim (GOLLANCZ S.F.) by Maggie Furey
This Savage Song by Victoria Schwab
Por si se va la luz by Moreno, Lara
Alcatraz versus the Knights of Crystallia by Brandon Sanderson
F Paul Wilson - Novel 10 by Midnight Mass (v2.1)
Our partner