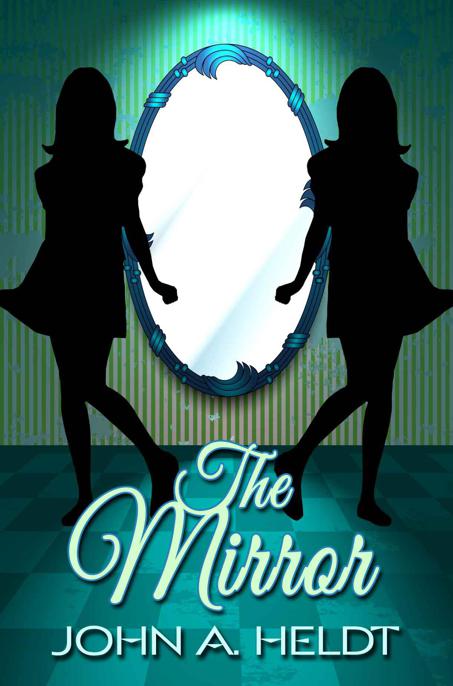 All rights reserved. No part of this book may be reproduced in any form or by any means without the prior written consent of the author, except for brief quotes used in reviews.

This is a work of fiction. Names, characters, businesses, places, events, and incidents are either the products of the author's imagination or used in a fictitious manner. Any resemblance to actual persons, living or dead, or actual events is purely coincidental.

NOVELS BY JOHN A. HELDT

In memory of Grandpa Andy

A sister is both your mirror and your opposite
. – Elizabeth Fishel

The past is a foreign country; they do things differently there
. – L.P. Hartley

There are two things in life for which we are never truly prepared: twins
. – Josh Billings

Ginny held the deadly object in her throwing hand and looked for an appropriate target.

She knew she'd gain the most satisfaction from nailing the flimsy yellow balloon in the middle of the board. The balloon reminded her of her ex-boyfriend – the flaccid, yellow-bellied bastard who had left her on Labor Day for a busty cocktail waitress.

But Ginny also knew that the surest way to win a prize at this booth was to hit one of the fat balloons on the pegboard's perimeter. She took aim at the biggest and prepared to fire.

"I don't know why you're wasting your money, Gin," Katie said. She gazed intently at her twin as she leaned on the counter of the booth. "You know these games are rigged."

"Of course they're rigged," Ginny said, lowering her arm. She eyed the nametag and then the face of the geeky teenager who had handed her three darts. "Aren't they, Tim? If I hit one of the underinflated balloons in the middle of the board, the dart will bounce off, you'll gasp in mock surprise, and I'll be out five dollars."

"But if I hit one of the fully inflated balloons on the edges, I'll pop it, you'll gasp in genuine surprise, and you'll feel a little less guilty about running this racket."

Ginny threw the dart at her original target and popped it. A few seconds later, she followed with another successful strike.

"What if I pop three balloons?" Ginny asked.

"Then you win a better prize."

Ginny pointed to the right side of the booth.

"Can I get that hairy little man over there?"

The attendant handed Ginny her prize.

Ginny laughed along with her sister as they stepped away from the dart-toss stand and onto a busy walkway that provided access to dozens of game booths, food vendors, and other attractions at the Cedar River Country Fair. Part carnival, part farmers' market, and part outdoor theater, the fair had been a local institution since an eccentric entrepreneur named Robert Sullivan had founded it in 1960.

"What are you going to do with that?" Katie asked. "Stick pins in it? If you want to get back at Cody for dumping you, I can think of better ways –
much
better ways."

"I can too. I just thought it would look nice in our dorm room."

Ginny admitted that the pin thing had considerable appeal. She had nothing against troll dolls. With their wild hair and dopey expressions, they were seriously cute. But if pounding a railroad spike through the groin of one would bring even temporary discomfort to Cody Williamson, she would do it in a New York minute. She pondered the delightful possibilities until Katie disrupted her daydream with a familiar refrain.

"No. I'm not ready to go. We still have an hour before the fair closes."

"What do you want to do then?"

Ginny considered the question as she stepped out of the way of a speeding unicyclist and led Katie toward a candy stand. She didn't have a ready answer. The sisters had seemingly done it all. In eight hours, they had visited more than twenty booths and seen everything from a blues performance to
Hamlet
to a puppet show.

They had done the sorts of things they had done every year since 2012, when their parents had taken them to the "hippie fair" for the first time. Now incoming college freshmen, they had returned to the fair this year, without their family, to celebrate their nineteenth birthday.

When they reached an unoccupied space near the stand, Ginny turned outward and scanned her surroundings. Seeing nothing of interest, she concluded that maybe it
was
time to go. Then she remembered something, reached for her purse, and retrieved a program she had grabbed when the twins had passed through the gates at one o'clock.

She turned quickly to a map of the fairgrounds in the middle of the program. When she found what she was looking for, she held out the map and pointed to a spot with her finger.

"There's a new section by the water that we haven't seen."

"What are you talking about?" Katie asked. "We've seen everything."

"We haven't seen this. They added it just this year. There are some exhibits and stuff they brought back from the old days – stuff that hasn't been here since Grandma was a kid."

"What kind of stuff?" Katie asked.

"No. I won't even consider it until you tell me what's there. If you want me to walk to the other side of the fairgrounds, you have to at least give me a good reason."

Ginny shook her head and sighed. She wondered how two people who had evolved from the same zygote could be so different in so many ways, particularly when it came to having fun and trying different things. Then again, it had been that way from the beginning.

Ginny was adventurous. She ordered jalapeno ice cream simply because she could, selected reading material by pulling random books off shelves, and went on blind dates at least twice a year. She liked spontaneity and life on the edge.

Katie was cautious. She ordered vanilla ice cream nine times out of ten, researched books before reading them, and scoured the social media profiles of every guy who asked her out. She liked predictability and life in the comfort zone.

"Oh, all right. Give me a minute," Ginny said. "You can be so stubborn at times."

Katie stuck out her tongue.

Ginny responded in kind, laughed, and then returned to the slick eight-page program, which contained more advertising than useful information. She finally found what she was looking for on Page 7, under the heading "Sixties Revival," and gave it a quick scan.

"According to this, the new section is mostly carnival stuff," Ginny said. "There are three funhouses, a fortune-teller, and a performance park with fire-eaters and sword-swallowers."

Katie stared at her sibling and raised an eyebrow.

"Can you think of something better?" Ginny asked. "It's too late to do anything else tonight. Let's just take a look. If it's lame, we'll leave."

"OK. I'll go, but only if we start with the fortune-teller," Katie said. She smiled sweetly. "I want to know if there's a sensitive surgeon in my future."

"What does the fortune-teller do anyway?" Katie asked. "Flip cards? Read tea leaves?"

"I'm not sure. The program only mentions a crystal ball."

"She has a crystal ball?"

The girls didn't bother with Performance Park, where sword-swallowers, fire-eaters, and jugglers entertained dozens. They instead walked directly to a red-and-white-striped tent on the eastern edge of the fairgrounds.

When they arrived at nine twenty, they learned from a sign outside the tent that Marta the Magnificent did more than gaze into crystal balls. She also read cards, leaves, and palms for the reasonable sum of ten bucks per person.

"Welcome, ladies," a middle-aged woman said as Ginny and Katie cautiously entered her lair. She extended her hands toward two unoccupied chairs at her table for three. "Please take a seat and make yourselves comfortable."

Ginny sat in an upholstered hardwood chair that looked like a leftover from the reign of Louis XIV and placed her purse and troll doll on top of the table. When she saw that Katie had settled into her seat, she flashed a mischievous grin and returned her attention to her host.

Marta turned to her left.

She turned to her right.

"I can see that. It's nice to meet you," Marta said. "Will it be cash or credit today?"

She handed Marta a twenty and watched as she turned toward a cash box, which sat beside a credit-card scanner, a stack of tarot cards, and a teacup on a smaller table about an arm's length away. When the seer put the bill in the box, Ginny did a quick assessment of the establishment.

Apart from the tables, the chairs, and the beaded curtains, there wasn't a whole lot to see. Two crisscrossed strings of white Christmas lights hung from the ceiling, providing the only illumination. A thick rug sporting a floral design lay on a makeshift hardwood floor.

When Marta finished the business transaction, she turned to face her guests, smiled, and rested her folded hands atop the large table. Round, sturdy, and roughly four feet across, the table was covered with a red velvet cloth.

"I like your friend," Marta said to Ginny. "Did you win him throwing darts?"

"My son Tim runs that stand. I hope he treated you well."

Ginny felt bad about giving the attendant a difficult time – but not too bad. She figured that a family that ran at least two booths at a fair like this wouldn't go hungry next week.

"Have you girls decided on a path to enlightenment?" Marta asked.

The twins gave each other puzzled looks.

"Will it be the ball, the cards, the palms, or the leaves?"

"We want to do the crystal ball," Katie said. "It seems the most legit."

"It's all right, girls," she said. "I welcome skeptics. One of my objectives as an accomplished clairvoyant is to make believers out of each and every one of my customers."

Ginny turned away from her sister and studied the woman who claimed to see the future. Even wearing a gypsy dress, a paisley bandana, and rings that weighed down her slender fingers, she didn't look all that out of the ordinary. She was probably a soccer mom or a loan officer in real life. She had a gentle face and a soothing voice that put Ginny at ease.

"You both seem to be in a good mood," Marta said. "Is today a special day?"

"It's our nineteenth birthday," Katie said. "We usually come to the fair with our family, but not this year. It's just the two of us tonight."

"That's too bad. Birthdays should be spent with family."

"Oh, we spent time with them," Ginny said. "We just did it last night. Our parents insisted that we go on our own. They gave us fair tickets for our birthday, along with these bracelets."

Ginny moved an arm across the table and brought her left wrist into alignment with Katie's right. A diamond tennis bracelet that cost a thousand dollars adorned each wrist.

Looking for You by Kate Perry
Curse of the Druids by Aiden James
So Over My Head by Jenny B. Jones
Vampire - In the Beginning (Vampire Series Book 1) by Mitchell, Charmain Marie
The Little Ice Age: How Climate Made History 1300-1850 by Brian Fagan
Tanked: TANKED by Lewis, Cheri
Still Life With Woodpecker by Robbins, Tom
The Soldier (Men Who Thrill Book 3) by Blue, Kaye
Romance: Rockstar Romance: Rock My World (A Bad Boy Rock Star and a College Girl Romance) (Contemporary New Adult Second Chance Romance) by Kelly Clark
Q: A Novel by Evan Mandery
Our partner