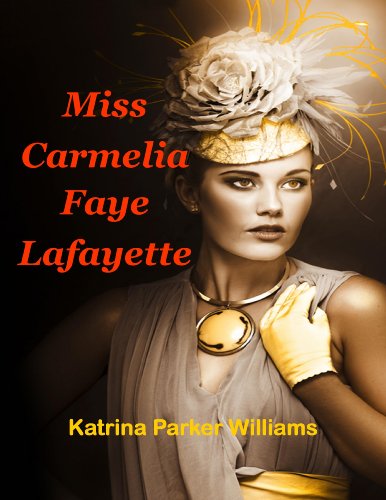 A publication of Step Art Designs

Miss Carmelia Faye Lafayette was born in Cane River, Louisiana, in 1892 to a French blacksmith and his colored house servant, whom he had hired to take care of his ill mama.  A short while after her employ, he began a relationship with the house servant, marrying her a few months after his mama’s death.  He was a fairly wealthy man, yet he drank excessively, oftentimes becoming verbally and physically violent.

Miss Carmelia was an only child and saw much abuse in her lifetime.  She ran away from home when she was sixteen to escape the abuse by her papa.  She met Hawk Edmonson at a colored traveling minstrel show and married him within a week of meeting him.  She wasn’t in love with him, but she believed it couldn’t be any worse than what she was experiencing in her home life.

Miss Carmelia and Hawk traveled all over Louisiana and to parts of Mississippi with the minstrel show, Miss Carmelia earning her fare playing Three-Card Monte, becoming exceptional at conning her marks out of their hard-earned cash.  When Hawk spent a stint at Parchman Farm, a year after they married, Miss Carmelia was devastated. She had no home, living in low-grade motels as the minstrel show traveled throughout the state.  At Hawk’s request, one of the minstrel show members allowed her to live with his family in Wayne County, Mississippi, until Hawk got out of prison two years later.  During that time the minstrel show disbanded, leaving Miss Carmelia unemployed once again.  She found employment as a barmaid at a colored barrelhouse, called the Hankering, and made some pretty good wages, saving up every penny.  When Hawk got out of prison, he started working at the barrelhouse as a bouncer, and a year later with his savings and hers, they bought the barrelhouse.

As the Hankering began to make money, in fact a lot of money, it drew the unwanted attention of Sheriff Theodore Hostler and his deputies.  They began to shake down Hawk until he got fed up with their blackmail and settled the issue in a fight right in the middle of the Hankering.  Hawk killed one of the deputies before being shot himself.  Sheriff Hostler dragged Miss Carmelia and every colored resident at the joint down to the sheriff’s office to answer a ton of questions about the deputy’s death.

Everyone told the same story, “I ain’t seen nothing, sir.  My face was in the wall.”

Every day for a week, Sheriff Hostler made his rounds to the joint to harass Miss Carmelia. Customers stopped coming around because of the harassment, and Miss Carmelia eventually had to close down the Hankering.  Sheriff Hostler knew he had nothing to pin on Miss Carmelia, but he wanted to make her squirm anyway.  He didn’t like her nor Hawk, having no compunction about sending her to jail for anything he could pin on her.  With little to no evidence against her, he eventually dropped the investigation and closed the case.

Over the next few weeks, Miss Carmelia’s mood had changed.  She had grown bitter and had become a bit jaded, lashing out at anyone who tried to take advantage of her, something Hawk had tried to do when they were married.  He was extremely jealous and over-possessive, demanding to know her every move.  He couldn’t fathom she had a mind of her own, and she refused to be controlled by anyone, including Hawk.

Fed up with her determined ways, Hawk started creeping around on her during their marriage.  When she found out about his affairs, she divorced him at age twenty and didn’t see him for over six months.  Eventually, they got back together, Hawk asking her to remarry him and Miss Carmelia refusing, vowing never to be in a position where a man had total control over her life again.  She told him if he wanted her, it would be on her terms, and marrying him was not negotiable.

Hawk accepted her terms but didn’t like it.  He had a fiery temper, and whenever he thought he was at risk of losing her, he’d wail on her at the least provocation.  Miss Carmelia put up with the abuse, primarily because she had grown fearful of Hawk, and she knew Hawk was crazy.  When he got killed, she was relieved.  Actually, she was glad to be rid of him.  The years of abuse she had suffered at Hawk’s hands had hammered out any affection she had for him.  All she felt for him before his death was contempt.  If the deputy had not killed Hawk, Miss Carmelia surely would have.

Miss Carmelia decided to reopen the Hankering a couple of months after Hawk’s death.  It was a Friday night in late August, and Miss Carmelia had just opened the doors of the Hankering for business.  The patrons had heard of the temporary closing and found other places to hang out, although many not feeling fulfilled. She didn’t have much difficulty getting her customers back, many of them itching for a place to get tore down drunk.

Two of her regular customers showed up as soon as the doors opened and seated themselves at the bar, ordering a couple of shots of whiskey.  Miss Carmelia had told them a week earlier to get the word out that she was back in business and bigger and better than ever.  They told her that they had spread the word and the regulars should be heading back, the months the Hankering was closed sending some of them in Wayne County to near dehydration.

“Good.  We gotta get this place jumping again,” Miss Carmelia said.  “And things gone change.  For the better.”

Buford Tee entered the joint, noticing a colored couple huddled up in the corner and the two men seated at the bar.

“A whiskey, please,” Buford Tee said, walking to the bar and seating himself, nodding to the two men.

Miss Carmelia had her head down when Buford Tee sat down.  She didn’t see him come in, but she did recognize the voice.

“Fifty cents,” she said, sliding the drink to him.

He pulled the drink close to him and said softly, “How have you been?”

Miss Carmelia did not say anything.

“Did you hear me?” Buford Tee asked, unsure if she had heard him.

“You talking to me?” she asked coldly.

“Me, the devil?” she said sharply.

“Oh, you remember that?” he said, hearing the anger in her voice.

“Hell, yeah.  You thought I’d forget something like that?” she snarled, the two men now turning around to get a good earful of the juicy conversation.

Miss Carmelia turned and walked out back of the Hankering, slamming the door behind her.  Buford Tee sat there, watching the empty space where Miss Carmelia once stood, stunned by her reaction.  The two men sipped on their whiskeys and sat back to watch what would happen next.

Buford Tee thought back to the first time he ever saw Miss Carmelia.  It was at the Hankering the night her ex-husband was killed.   The Hankering was located down by the railroad in Wayne County, open only on weekends, the only time most coloreds had off work.  It was a place for them to get away from the weightiness of the workweek, and particularly, from their white employers, to enjoy a night or two of drinking, of course, but gambling, a little sex, or rather a lot of sex, and dancing also satisfying the desires of the patrons.

Locals made their way to the Hankering in a variety of ways: on horseback, by horse-drawn wagon loaded down with patrons, and even on tractors on loan for the evening from their employers, which pulled flatbed trailers filled with men and women desiring an evening of unbridled pleasure and unadulterated entertainment.

The deputy of Wayne County and some of his officers would sit in their Model T Ford squad cars, watching as the colored folk made their way to the barrelhouse. They’d wait until an hour before midnight to raid the place, when most folks were tore down from drunkenness, and as they put it, involving themselves in all manner of sin and debauchery.

A piano player beat out tunes on the old Steinway piano as colored men and women in their best going out clothes—women in fitted dresses designed to attract the attention of their male suitors and men in clean shirts and dungarees, worn only for a night out on the town—strutted their stuff on the wooden plank dance floor, jiggling and twisting, bopping and dipping, their unrestrained dance movements ignited by the lightning bolt effects of the bootleg liquors and wines they consumed.

The owner would set out a barrel of bootleg whiskey and a chock barrel of the homemade wine, and men and women with tin cups would dip them in the barrel and partake of the mind-numbing, sense-altering brews.  One or two cups would set them up right, but more than that would knock them out.  Most folks could handle one or two cups, but not too many could handle much more than that, although many had tried.  Those crazy enough to test their mettle would fall prey and be sidelined against the wall of the barrelhouse until the effects wore off; oftentimes, it’d be late the next day before they would make their way back home.

Some patrons made use of their time at the barrelhouse by gambling in the back of the joint: shooting craps, playing Head and Tail and Two Up and Three Card Monte, and some betting a gig at one hundred to one odds, bets as low as penny being placed; hopeful gamblers wished for the big pay out, their hopes often dashed as the odds often favored the barrelhouse owners.