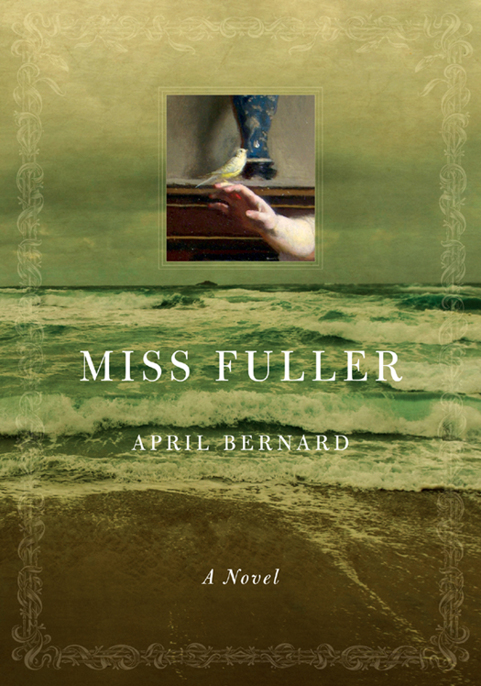 News of the wreck made everyone want to be up and going, doing something, talking, moving, to keep the knowledge from puddling and festering. It was a hot July, in the year 1850. Margaret Fuller, their old friend, together with her husband and young son, had been ship-wrecked and drowned, on their voyage home from Europe. No one in the Thoreau house had slept.

“It’s Bedlam!” said Mother, as if the sight of Mr. Emerson coming up the path made it official. One went to see Mr. Emerson; he did not pay calls himself, and certainly not before breakfast. He dipped his massive head slightly as he came through the door, a Colossus visiting the Pygmies. Mother’s nose came up about even with his middle waistcoat button.

Mr. Emerson had come to ask Henry to go from Concord to New York and then Fire Island, the site of the wreck, to claim the bodies and other remains. With luck, yet how ridiculous to speak as if luck could ever again be hoped for, Henry would find her book manuscript.

Anne, his youngest sister, helped Henry pack his satchel. She always helped him if he let her. She tried to persuade him that as this was a delicate errand he would need her to accompany him.

“The ocean may well have stripped her clothes,” she said.

He said, “A dead woman is like any dead animal.”

It had been nearly a decade earlier, when Anne was twelve years old, that she had first, as she said, “encountered” Miss Fuller. She and her oldest sister, Helen, sometimes still called one of the “girls” although she was well into her twenties, had traveled as guests of Mrs. Deaver on a special trip into Boston. Trips to Boston were the height of excitement, but Anne was always ready to go anywhere, even the next town. All other destinations were known to be inferior to Boston — including New York, Washington, and London — with the possible exception of Concord itself and the home of a distinguished relative, a judge, who lived on a promontory in Marblehead. Anne, adopted and by far the youngest in the family, looked forward to Marblehead — someday, they said, she would see it — with especial awe.

Meanwhile, there were the reliable glories of Boston. The always fashionable Mrs. Deaver had purchased a subscription to something called “Conversations,” which title she pronounced with a self-conscious slowing and mouthing, as
if the syllables were Italian:
“Con-verr-sass-ee-on-es.”
Mrs. Deaver had taken a European tour.

For some time Miss Fuller had been “offering” Conversations, on topics of “general interest to ladies of culture,” usually at the Peabody home in West Street. But for this exceptional occasion, raising funds for a new progressive school, it was to be a larger gathering at the grander home of Mrs. Vaughn. There had been some confusion and embarrassment about whether or not the girls would need to purchase tickets, but Mrs. Deaver convinced their mother she was welcome to bring them along as guests. Anne was deemed just old enough to behave herself; Sissy, the middle sister, was nursing a slight cough, and had decided to stay at home. The cough may have been a convenience, as she was inclined to regard such outings as frivolous. Helen was perfectly polite but they were to know that she condescended by accepting the invitation. Their brothers John and Henry, meanwhile, had made the breakfast table raucous with predictable jokes about the dangers of the Thoreau girls “conversing.”

“John ‘converses’ nineteen to the dozen,” said Helen crossly from her corner of the stagecoach, “and Henry in
certain moods
would talk over the last trumpet.”

The railroad lines commencing to cross-hatch New England had not reached Concord quite yet in 1841. So it was the Boston stagecoach, on that day offering the unexpected luxury of no other passengers, that shielded them
from the March sleet, as they were tucked up with blankets and hot bricks wrapped in burlap to warm their feet. Anne reached down to feel the heat from the bricks through her gloves.

Mrs. Deaver inquired politely about their brothers’ school and Helen fibbed, saying that attendance was still growing, and they had great hopes for the summer term. There were no such hopes; the school was not making enough to pay and their brothers were exhausted by the work. Anne gamely seconded her sister’s remarks, as she often did, with a quiet, “Indeed.” This old-womanish habit she had picked up from one of her mother’s friends. When Anne needed to disagree, she applied equal economy of means. “Do you really think so,” without the interrogative lift, expressed a quiet nay without committing her to the labor and peril of voicing a counter-argument. Her family, who would have liked the argument much better, found this tiresome. No doubt that was the chief reason she persisted.

Mrs. Deaver proceeded to “sell” them on their forthcoming treat.

“The first time I went, in December, it was most elevating. The Peabody ladies have a little shop, completely refined, with hundreds of books and pamphlets. We met in the ‘book room,’ very cozy. I tried to just get the feeling of the thing, not as a participant of the
Conversatione
myself, just a learner, a student. Well, not knowing anything certainly did not restrain Mrs. Delapont; nor her cousin from New York.
She opened all of her remarks with ‘In New York,’ so as we’d know. ‘In New York, the question of archaic architecture in private homes, especially broken columns
à la grecque
, is quite settled.’ In New York!”

“No one cared, it was entirely a different matter from what Miss Fuller was offering for our consideration, which I believe concerned the large spaces of a geometrically pleasing kind, as in the ancient Acropolis, which is built on the Golden Mean. Things in proportion, ‘the assistance they offer for thought.’ ”

“Some people,” said Helen, “have been known to think perfectly well in meditation cells. Or prisons.”

“Certainly, yes, but would they not have thought better and more, more
widely
, on the Acropolis? That’s just the sort of conversation one can run with, as it were, with Miss Fuller in the room. She’s got the force of large ideas, even if I’m not sure where the ideas lead because I don’t have the reading. Such vistas — Greek, which I believe Miss Fuller actually reads, and those heathen classical stories which are really so wise and not at all in contradiction to our own Bible if read rightly, as —
allegories
.”

“Dear me yes, her father trained her as if she had been a boy. It’s made her goggle-eyed and very odd, of course, but she is a female genius, certainly, though I can’t say if I know that she is a model of the New Woman, as Elizabeth
Peabody claims, or something simply unique —. She speaks like a wonder, can quote anything at all.”

“I trust that the slavery question will be addressed.”

“Not this afternoon — more classics, I think. She does know so many languages. Greek, as I said, Latin, Italian, French, German, and I think someone said she was studying Hebrew, which seems peculiar.”

“Henry says that we should all study American,” said Anne.

“How droll,” said Mrs. Deaver. The girls should not worry about their dresses, she went on, as no one would expect them to measure up to Boston fashion. Country girls, she elaborated, might even be said to be in bad taste should they attempt to dress like city girls. She said that skirts were even wider than last winter and that the very latest thing was cuffs decorated with colored silk fancy-work sheathed in Bruges lace.

Anne fingered her plain cuffs of dark red merino, the same fabric and color as the rest of her best coat and dress. Helen, in dark blue, moved her head in a way that could not quite be called “tossing” and looked out the window, apparently seized by a sudden interest in melting snow.

“Surely,” she said, staring out, “we should prefer quality and enduring modest beauty of dress to fashionable fripperies.”

As Mrs. Deaver adjusted her shoulder cape, revealing her own splendidly embroidered and lace-covered dress cuffs, she demurred, slightly: “I was not speaking of fandoodles and bric-a-brac, dear. Certainly nothing like those turban tassels on Angela Sawyer’s aunt when she visited in the fall.”

The memory of the tassels, and the head that had so unwisely worn them, allowed them all to share in the delight of a shocked pause. Helen arranged herself and embarked on a summary of Mr. Garrison’s most recent editorial in the
Liberator
, which editorial both of her listeners had in point of fact already read. Although she accepted a chicken wing from the hamper, she did not pause to take a bite until they passed the Common, when she at last took account of the food she had been using as a sort of conductor’s stick.

The Vaughn house occupied most of an entire block; Anne discarded her first impressions that it was a municipal hall or a theatre, and took in the fact that it was an actual residence. Mrs. Deaver looked suddenly, ludicrously, shy, as if the granite of her face were visibly eroding to shale and about to slide away. At least the sleet had stopped; the street and steps were dry. Helen tugged at her gloves with an air. If she could gird up, then so could Anne; she retied her bonnet, patted her coil of braids at the back, and gripped the iron railing of the front steps.

Of the preliminaries Anne remembered little, for like an animal in peril she concentrated almost entirely on danger
from the moment she stepped inside. Relieved of coat and bonnet, she shrank back, ducking her head to shield her eyes against the brilliance of the reception hall. Helen, graceful and pretty and lit up by the company, led the way as always, greeting and being introduced. Anne stayed at her sister’s side
like an ape on a leash
, she thought.

Set in Darkness by Ian Rankin
Something Wild: A Reckless and Real Prequel Novella by Lexi Ryan
Wrong Number by Rachelle Christensen
Sacrifice by David Pilling
Cunning of the Mountain Man by Unknown Author
Reaper by K. D. Mcentire
License to Quill by Jacopo della Quercia
[Texas Rangers 04] - Ranger's Trail by Elmer Kelton
Healing A Hero (The Camerons of Tide’s Way #4) by Skye Taylor
Arrow of Time by Andersson, Lina
Our partner