Miss Grief and Other Stories 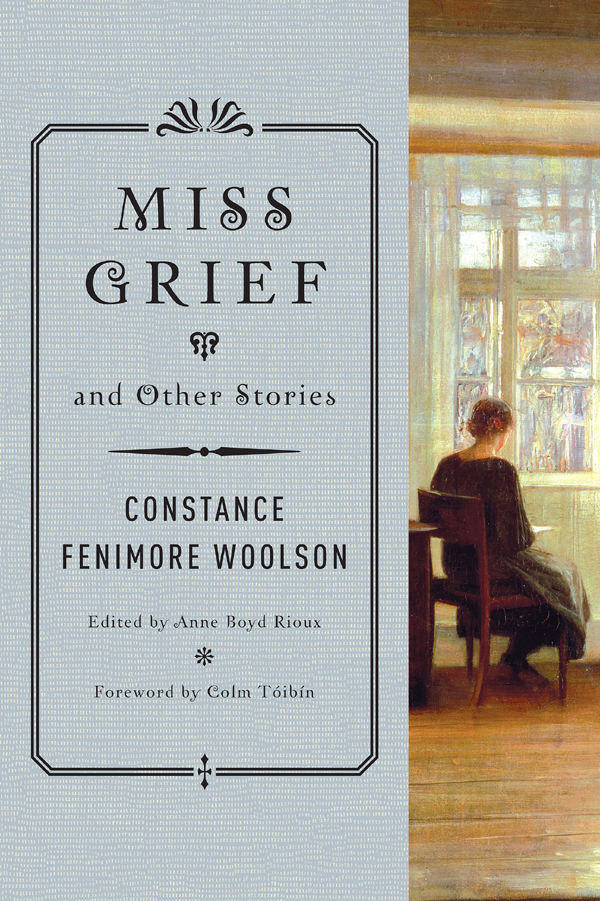 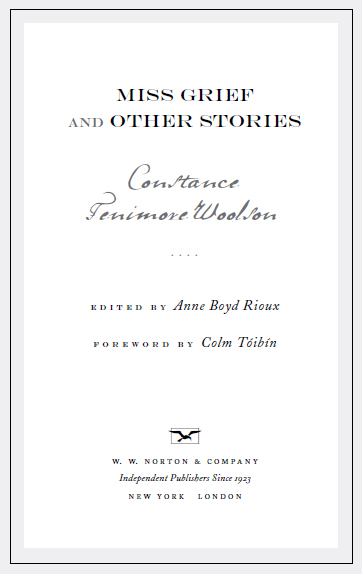 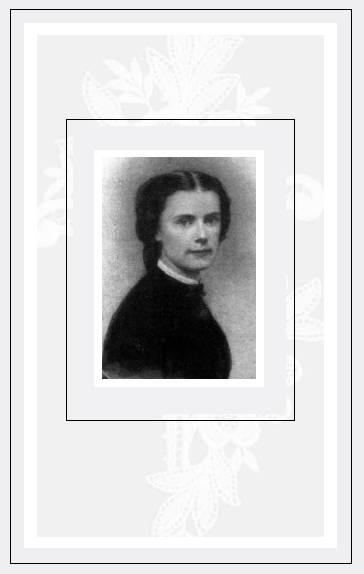 T
HE HOUSE KNOWN AS VILLA BRICHIERI-COLOMBI, WHICH
the American writer Constance Fenimore Woolson began to rent in 1887, still stands on the hill of Bellosguardo, overlooking Florence with a commanding view of the city and the Arno valley. The gardens are still surrounded by high walls, offering the house the sort of privacy that Woolson considered necessary for her happiness. Woolson wrote to a friend to say that her new accommodation was “an immense success in every way. â¦ The situation is unrivalled. â¦Everywhere, when I raise my eyes from either drawing room (there are two), dining-room, bedroom, dressing-room or writing-room, I see the most enchanting landscape spread out before me; mountains, hills, river, city, villages, old castles, towns, campaniles, olive groves, almond trees and all the thousand divine âbits' that make up Italian scenery.”
1

While Woolson was an inveterate traveler, having wandered a great deal in the American South, in the Orient, in England, Germany, and Switzerland, Italy seems to have been the place that fascinated her most. To another correspondent she noted that, fifty years before her first visit, her granduncle James Fenimore Cooper had also been in Florence with his
family. “They remained ten months,” she wrote, “living first in an old palace in the city, and then in a Villa outside of the walls. â¦We have been much interested in finding at a library here a book of Uncle Fenimore's which we had never seenâ
Excursions in Italy
. It was published in Paris in 1838, and gives an account of their Italian journeyings.”
2

Farther up the hill of Bellosguardo lie two buildings facing each other that are rich in literary history. On the left-hand side of a small dusty square is Villa Montanto, with its battlemented watchtower. This is where Nathaniel Hawthorne wrote a draft of
The Marble Faun
. (“Hawthorne wrote the
Marble Faun
there one summer, you know,” Woolson wrote to her cousin. “Perhaps one could catch a breath of his spirit.”
3
) Opposite is Villa Castellani, in one of whose apartments lived the Bostonian Francis Boott with his daughter, Lizzie. Henry James, who knew the Bootts well, used their apartment and indeed aspects of their personalities and their relationship with each other in the creation of Gilbert Osmond and his daughter, Pansy, in
The Portrait of a Lady
and later in the making of Adam Verver and his daughter, Maggie, in
The GoldenÂ Bowl
.

Constance Fenimore Woolson met Henry James first in 1880, when he was in Florence writing the early sections of
The Portrait of a Lady
. She wrote to a friend that despite his busy schedule, “he found time to come in the mornings and take me out; sometimes to the galleries or churches, and sometimes just for a walk in the beautiful green Cascine.”
4

Woolson drew on these encounters for her story “A Florentine Experiment,” just as James used them, perhaps more obliquely, in the scenes in
The Portrait of a Lady
depicting Osmond and Isabel after their betrothal. Over the next seven
years, Woolson and James met in Switzerland and in England. They had much in common. They were both solitary souls who sometimes needed societyâJames more than Woolsonâbut they both also dreaded too much company and all forms of intrusion. They both paid great care and attention to their work. Woolson wrote to a friend: “I don't suppose any of you realize the amount of time and thought I give to each page of my novels; every character, every
word
of speech, and of description is thought of, literally, for years before it is written out for the final time. â¦It takes such possession of me that when, at last, a book is done, I am pretty nearly done myself.”
5

In 1887, Woolson returned to Florence, wishing to rent an apartment or house on Bellosguardo. She found the Villa Brichieri-Colombi and, before she moved in, invited Henry James to sublease the villa while she was staying in an apartment in the nearby Villa Castellani. The two writers saw each other every day. When James, having moved to Venice, let her know that he was unhappy in the watery city, she invited him to live in rooms on the ground floor of her newly rented villa. On April 24, 1887, James wrote to Edmund Gosse from Villa Brichieri-Colombi: “I sit here making love to Italy. At this divine moment she is perfectly irresistible, & this delicious little Florence is not the least sovereign of her charms. I am fixed, till June 1
st
, in a villa which in England would be suburban,
but here is supercelestial, whence the most beautiful view on earth hangs before me whenever I lift my head.”
7

James was writing
The Aspern Papers
. It was, one imagines, not lost on him, and on Woolson when she came to read the story, that it concerned the legacy of a famous American writer whose first name was Jeffrey (with echoes of James Fenimore Cooper's first two initials), and that it concerned a man in search of shelter, a man who had devoted his life to literary matters who was now in Italy. It also dealt with two spinsters living in a large house, and their gnarled relationship with theÂ visitor.

In 1880, Woolson had published one of her most heartbreaking and dramatic stories, “âMiss Grief,'” about a woman in Italy who is living in great poverty with her aunt. The woman approaches a younger writer with samples of her work. “âMiss Grief,'” dealing as it does with two unmarried literary foreigners in Italy, has interesting echoes in
The Aspern Papers
.

In a preface written for the New York edition of his work, however, James claimed that the roots of
The Aspern Papers
were in a story he heard about the life of Clare Claremont, Shelley's sister-in-law and mistress of Byron, in Florence when she was old and forgotten and in possession of invaluable literary papers. But the inspiration for the story, to some extent, was also in James's own circumstances as the guest of Constance Fenimore Woolson while the story was being composed and, indeed, as a reader of her story “âMiss Grief.'”

While James's knowledge of the United States was severely limited, Constance Fenimore Woolson could write about states of mind and states of the Union that were beyond James's reach. Just as years later Edith Wharton would make
James envious of her intimate knowledge of old New York society, Woolson made clear to him that many parts of his own country, which she knew well and described in stories such as “St. Clair Flats,” “Solomon,” “Rodman the Keeper,” and “Sister St. Luke,” were closed to him.

Woolson's letters from Europe are filled with wonder and with vivid description; her earlier letters from the American wilderness are equally vivid as they take pleasure in describing danger, or memories of danger. In one letter she writes in reply to a description of fierce cold: “The cold mentioned made me shudder. It made me âcreep' a great deal more than ever the moccasins did in Florida. I wo'nt [
sic
] say that I am fond of snakes; but I like to look at them from a safe distance. I used to row up the creeks, especially to find them.”
8
In another letter, written from Florida, she described her exotic life in the wilderness: “[O]n other days I take a row boat and go prowling down the inlet into all sorts of creeks that go no one knows where; I wind through dense forest where the trees meet overhead, and the long grey moss brushes my solitary boat as I pass. I go far up the Sebastian River as utterly alone as Robinson Crusoe. I meet alligators, porpoises, pelicans, cranes, and even deer, but not a human soul.”
9

Woolson could become familiar, then, with creatures from the wild and prowl among them and also associate on equal terms with Henry James in London, Geneva, Florence, and Rome. She could re-create the atmosphere of the solitary places in a story as full of atmosphere as “St. Clair Flats,” in which she writes about light and water with the same sonorousness and clarity as Joseph Conrad. She could write about the legacy of history in “Rodman the Keeper,” in which the
bitterness and destruction arising from the Civil War are dramatized. In her stories about artists, she could include the figure of Solomon in the story of that name, a failed artist living in poverty in the coal country of Ohio.

What these stories have in common with the work of Henry James is their refusal to offer the reader a happy ending, or an easy sense of redemption. Also, Woolson tended to narrate her story through the eyes or the voice of one single protagonist, thus achieving a sort of intensity as the story proceeds.

As well as being an intrepid traveler, Woolson became an adventurous and brave explorer in the territory of human disappointment. None of her characters is allowed to prevail. If there is an artist, as in “Solomon” and “âMiss Grief,'” then the art will go unrecognized; if there is an evocative landscape, then it will spell death and decay. And if there is travel and adventure, it will lead to misfortune or an ambiguous solution.

Woolson is at her most brilliant and her most complex when she writes about disappointment in love, as she does in “A Florentine Experiment” and “In Sloane Street,” two stories about Americans in Europe. Both stories deal with a triangle that in less subtle hands could be called a love triangle, but in Woolson's stories is presented as stranger and more interesting and dynamic.

In the first of these two stories, set in Florence, Mrs. Lovell, who has lost her husband, is being pursued by Trafford Morgan, a desultory American. When it becomes clear that Morgan cannot or will not win her, the intelligent and self-effacing Margaret Stowe, who lives with her aunt, begins to move in his orbit. They may or may not love each other,
and what is questioned in this most nuanced drama is the contingent nature of love itself. Woolson is clever enough to allow the story to become mysterious and open-ended and the theme to be filled with shade.

In her book
A Private Life of Henry James
, Lyndall Gordon ponders the relationship between the character of Margaret Stowe in this story and her creator. “Woolson draws an obvious self-portrait in her heroine,” she writes.
10
Trafford Morgan, who is the same age as Henry James when Woolson got to know him, is an expatriate wanderer, diffident, hard to pin down. Margaret and he walk in the Cascine, where Woolson and James also walked (and where Isabel Archer and Gilbert Osmond walked). What is remarkable about the story is how elusive and filled with misdirection their relationship is, how oddly they circle each other, as though the author realized that the age of romance for serious novelists had come to an end. The story is bathed in the sort of irony and brittle wisdom that was, a generation later, to be found in the work of Virginia Woolf, Katherine Mansfield, and Elizabeth Bowen.

The Kabul Incident: A Weir Codex Novella by Mat Nastos
Creeps Suzette by Mary Daheim
Return of the High Fae (Vegas Fae Story Book 1) by Tom Keller
The Adventurous Couple's Guide to Sex Toys by Violet Blue
Missing (The Brannock Siblings Book 3) by Jessica Wilde
Love for Lydia by H.E. Bates
Closer to the Chest by Mercedes Lackey
The Underground Man by Mick Jackson
Not I by JOACHIM FEST
Marcia Muller - [08] - Eye of the Storm (v1.0)
Our partner