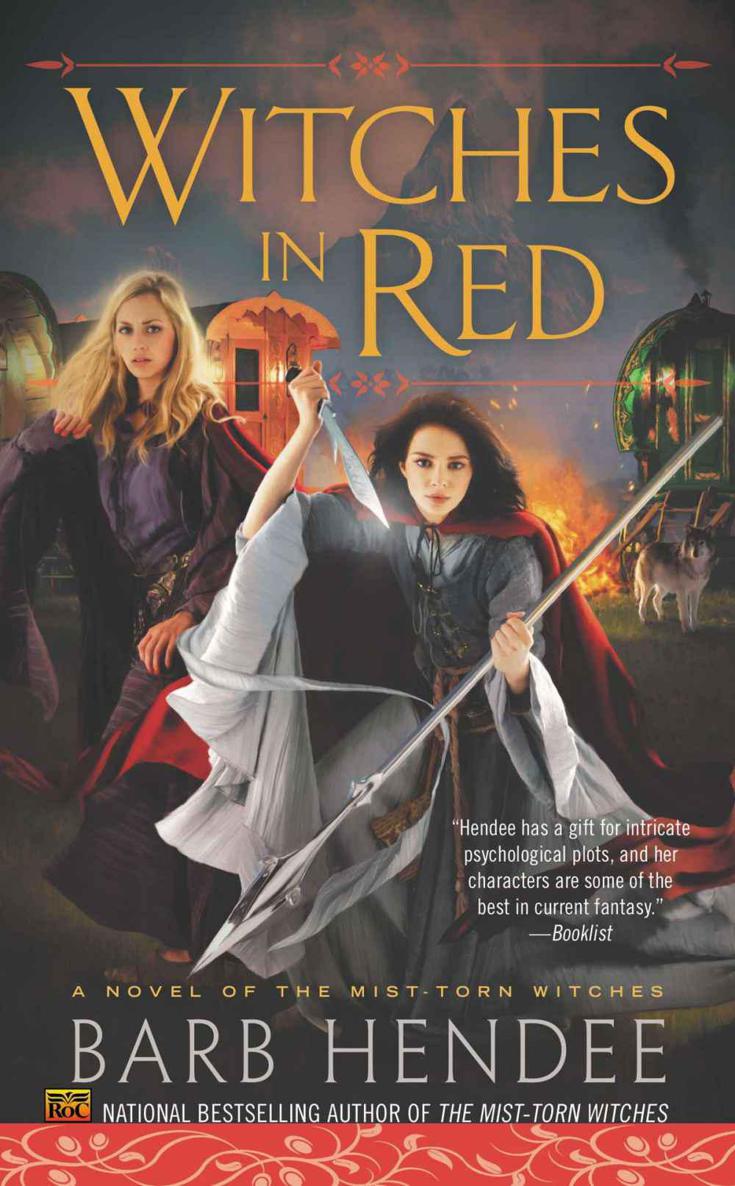 “A well-constructed fantasy with two likable and interesting main characters . . . a fun read.”

“The murder mystery at the core of this book . . . will hold readers spellbound.”

“Hendee knows how to hook her readers with beautiful detailed settings.”

PRAISE FOR THE NOBLE DEAD SAGA

“A mix of
The Lord of the Rings
and
Buffy the Vampire Slayer
.”

Of Truth and Beasts

“With several twists and surprises, this series is never predictable [and] the impressively shocking, climactic ending left me wanting more. . . . Don’t miss this exciting series of magic, mythical creatures, and incredible lore.”

“A crowd-pleasing mix of intrigue, epic fantasy, and horror.”

“
Of Truth and Beasts
. . . once again allows the reader the rare opportunity to travel into the uniquely imaginative realms that only [the Hendees] can create with such power and grace. . . . The Hendees’ style of writing is verbally arresting, leaving the reader unable to put the novel down. They are a talented team of storytellers who are able to build a world that is both foreign and familiar. . . . I, for one, am hooked and eagerly await the next incarnation [of] this hypnotizing series.”

“The antagonists are strong, convincing forces with private agendas that add satisfying twists to another excellent addition to the series.”

“The Hendees excel at delivering action and intrigue.”

Through Stone and Sea

“A textured canvas of tangled plots, hidden alliances, secret myths conjured from fantasy’s best-known landscapes, and unique characters who will surely take their place in the annals of fantasy.”

“Suspenseful adventure . . . incredible world building, and intriguing characters are the best part of this questlike fantasy.

In Shade and Shadow

“The Hendees, if given a chance to complete their entire saga, may yet produce a combined fantasy masterwork that will surely stand on the highest pinnacles of literary fantasy lore.”

“A nicely nuanced tale. . . . The authors use a deft touch to keep the pacing even and set the stage for future adventures in this endlessly intriguing horror-fantasy mix.”

Child of a Dead God

“Readers who love vampire novels will appreciate the full works of Barb and J. C. Hendee, as they consistently provide some of the genre’s best. . . . The audience will want to read this novel in one sitting.”

“Complex and bloody. . . . Interspecies distrust, grand ambitions, and the lure of dangerous secrets protected by the undead drive the action in this neat mix of horror with more traditional fantasy elements.”

Traitor to the Blood

“A rousing and sometimes creepy fantasy adventure . . . this is one of those books for which the term ‘dark fantasy’ was definitely intended.”

“A unique tale of vampires and half-vampire undead hunters set against a dark fantasy world ruled by tyrants. The personal conflicts of the heroes mirror the larger struggles in their world and provide a solid foundation for this tale of love and loyalty in a world of betrayal.”

Sister of the Dead

“[A] wonderful addition to the Noble Dead series
. . .
Sister of the Dead
leads us on an amazing adventure that will keep you engrossed until the final chapter. . . . This is a series that will appeal to both horror and fantasy fans.”

“[An] intelligent dark fantasy series. . . . Much more than a medieval ‘Buffy Does the Dark Ages,’
Sister of the Dead
and its predecessors involve readers on a visceral, highly emotional level and fulfill a craving for nifty magic, exciting action scenes, and a strong heroine who defies genre clichés.”

“Readers will turn the pages of this satisfying medieval thriller with gusto.”

“
Dhampir
maintains a high level of excitement through interesting characters, both heroes and villains, colliding in well-written action scenes.”

“An engaging adventure that is both humorous and exciting.”

In Memories We Fear

By Barb and J. C. Hendee

THE NOBLE DEAD SAGA—SERIES ONE

Sister of the Dead

Traitor to the Blood

Child of a Dead God

In Shade and Shadow

Through Stone and Sea

Of Truth and Beasts

The Dog in the Dark

A Wind in the Night

By Barb and J. C. Hendee

For Gary Jonas, who has kept me on the path of writing and who’s always liked tales about
gypsies.

I
am called Mariah.

In the mid of one night, I slipped away from the Móndyalítko encampment where I lived and made my way into the trees. I left my perpetually angry sister and my other relatives behind—at least for a little while.

I would not let myself think on any of them tonight. I was going to meet my love.

It still amazed me that he’d been living right under my nose for nearly four months, and we’d never noticed each other. How was that possible? But of course we both had obligations and duties, mine even less pleasant than his. Then . . . only a few weeks ago, we had spoken, and his hand had brushed mine, and I had
known
.

He was kind, not like the other soldiers posted here to oversee the silver mines. He whispered to me softly and touched me as if I were made of glass, and he listened
when I spoke. I’d never known how starved I’d been for someone to listen until he filled that empty space.

He was handsome as well, tall and slender, with thick hair and gray eyes.

I couldn’t wait to see him.

Once I was far enough from the encampment, I began to move faster, hurrying toward the place where we always met. I longed to touch his face and curl up with him beneath a blanket so we could whisper to each other and keep warm. Even when I’d barely eaten all day, those moments fed me more than the richest venison stew with fresh bread.

Though I knew most men looked at me with hunger—a wild slip of a dark-haired girl—I still could not believe this was happening, that a lieutenant of Prince Lieven’s soldiers, connected to the House of Pählen, loved me . . . wanted to marry me.

But he said we must keep our love a secret for now, until he could arrange for a transfer to a new post. I knew he was right, for I was the plaything of his captain, and if the truth came out, neither I nor my lieutenant might ever leave this place, so I guarded our midnight meetings like sacred treasures.

Still moving through the trees, I spotted the small clearing ahead, beside a stream, where we so often met, and I wondered if he was already here.

To my surprise, I was answered by a groan—that sounded like someone in pain.

“Sullian?” I repeated, this time in confusion, and I stepped into the clearing.

He was there, in his chain armor and his brown tabard, but he was bent over, holding his stomach. I ran to him. Vomit pooled on the ground before him, and saliva ran from his mouth.

Instead of answering, he stared at his own hand, and when I followed his gaze, my heart nearly stopped.

He gagged, trying to spit the saliva from his mouth.

He managed to stumble a few steps away from me, and I stood, rooted. Fur began sprouting from the exposed skin on his face and hands. He fell to the ground, writhing in pain. His hands continued to change, with his nails growing into claws, and then his chest began to expand. He was crying out in agony, and there was nothing I could do to help him.

I am Móndyalítko, and I have watched the shifters among my people change forms many times. It looked nothing like this. A true shift happened quickly, effortlessly . . . painlessly, from human form into animal form. It was as simple as breathing.

What was happening to Sullian was something else, something ugly and unnatural.

His cries of pain were so loud that he must have alerted the night watch, and I heard shouting.

“Where’s it coming from?” someone called.

“Over there!” someone else answered.

If they saw him, they would kill him.

“Get up,” I begged without moving any closer. “You must hide!”

He didn’t seem to hear me.

His dark brown tabard ripped into several pieces as his body continued to expand. His face elongated, and still I stood staring. A row of fangs grew in his mouth. I knew I should run, that within moments, he would no longer be himself . . . although this, too, was different from the way of my people’s shifters, who always remained themselves in either form.

But again, what was happening to Sullian was different.

I choked back a sob. He was all I had, and I was about to lose him.

His body was now larger than those of the great bears that roamed these northern forests, and his cries of pain shifted into low snarls. Unable to move, I took in the sight of him. He resembled a huge wolf in some ways: his head and paws. But his chest was much wider and his eyes were red. Saliva continued to pour from his mouth, and his snarls grew louder.

He dashed forward a few paces on his clawed feet, and then slowly, his head swung back toward me. There was nothing of my love remaining. I saw only rage in his mad red eyes.

Opening his mouth, he exposed his teeth, and I knew that running would be useless. Yet, if I’d wanted to run, I would have done so before now.

His whole body was trembling, and I waited for him to rush me, to end this.

Six men broke from the trees; five were soldiers, and the sixth was old Seth, an aging miner who sometimes looked in on my sister and me. He did not look so old at the moment, however, poised for battle and carrying a pickaxe.

Sullian’s head swung in their direction, and he roared.

Two of the soldiers carried loaded crossbows. One of them aimed and fired. The quarrel caught my love in the center of his chest.

My words gave the men a brief pause, as so far, none of the officers had succumbed to this horror. Attacking a superior was a hanging offense in the military, but their pause did not last long, as Sullian charged straight at old Seth . . . who didn’t stand a chance with his pickaxe. I heard Seth scream, and I wanted to weep, but I still couldn’t move my feet.

Another crossbow quarrel sprouted—from the side of Sullian’s throat—as three of the soldiers ran toward him with spears taller than they were. I heard the first one strike with a sickening wet sound, and Sullian tried to turn in his madness to attack the nearest man. But a soldier who seemed beyond fear rushed in, gripping his spear with both hands, and somehow drove the point through Sullian’s eye, pinning his head to the ground.

My love thrashed a few times, and then he went still.

Finally, I sank to my knees.

I was alone now.

Fulfilled by Allyson Young
Thirst by Benjamin Warner
The Body In The Bog by Katherine Hall Page
Weakest Lynx by Fiona Quinn
Guns and Roses by Brennan, Allison, Armstrong, Lori G., Day, Sylvia
The Isis Covenant by James Douglas
The Devil's Dozen by Katherine Ramsland
My Woman His Wife Saga by Anna J.
Getting Over It: Sapphire Falls Book Six by Erin Nicholas
Burn the Night by Jocelynn Drake
Our partner