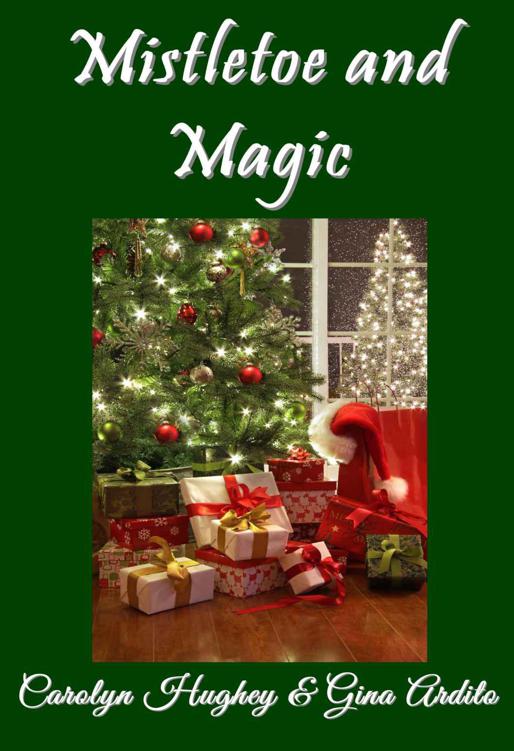 The Gift of the Magic

Shut Up and Kiss Me

All rights reserved. No part of this book may be reproduced, stored in a retrieval system, or transmitted by any means, electronic, mechanical, photocopying, recording, or otherwise, without written permission from the author.

It’s the holiday season in quaint Chester, New Jersey and Mallory Gardner is hanging on for dear life operating her shop,
Every Day is Christmas
, and trying to survive life with two daughters. And as if being a widow for two years isn’t bad enough; her eldest daughter blames her mother for her father’s death and exhibits mood swings that would give anyone a nosebleed.

Mallory’s sister Dina doesn’t help by constantly pressuring her to get back on the dating scene. But Mallory continues to resist, believing that any prospective suitor would take one look at her dysfunctional family situation and head for the hills.

Into this blissful setting comes Arden J. Miller, known as AJ, fresh from the tropics, but relocating for good in the town where his aunt lives. It doesn't take but one meeting with Mallory for him to become smitten. But he's not accustomed to a slow and steady approach. And the sparks that fly when he launches an all out campaign to win her heart is enough to set a house afire.

Can two irresistible forces deal with immovable objects, or will the effects of the holiday spirit help resolve issues previously thought to be unsolvable?

I hope you enjoy reading
Insanity Claus
and looking forward to hearing from you. I wish you all a very happy, healthy and prosperous holiday season!

To my friend, Carolyn Brown, who has inspired me since the day

I received the
call
from our publisher. Thank you for your generous

sharing of knowledge and unending friendship.

K. T. Roberts is the alter ego of Carolyn Hughey who writes mysteries and contemporaries with a touch of sizzle. Also available in eReader format from K.T. Roberts is
The Last Witness, Magnetic Attraction and Educating Daphne
, with the second in the Kensington-Gerard Detective series,
Elusive Justice
, right on its heels with a release date of December, 2012.

Originally a Jersey Girl, K. T. lives with her real-life hero, Bob, in Arizona. They have four children and when she's not writing; she's studying her craft, or whipping up some gastronomic delight for family and friends.

As an author under Amazon's Montlake Romance imprint, all of Carolyn's books will now be available in paperback and digital formats.
Cupid's Web
and
Shut Up and Kiss Me
were her first two releases with the
Shut Up and Kiss Me
being a best seller for Avalon Books. As a former chef, Carolyn was commissioned by her publisher to write a cooking series,
Romancing the Chef’s Toque
. The first in that series is
Dishing Up Romance
and is now available. Book #2 in the series,
One Menu at a Time
will be released December 11, 2012.

If you like to cook, if you like to eat, and if you’d like to find out some of the hilarious things that happen in restaurant kitchens, then these books are for you.

Visit Carolyn and K.T.'s website at http://carolynhughey.com and her blog at http://carolyn-hughey.blogspot.com. She loves to hear from her fans. Drop her a line and she will respond to you personally.

Mallory Gardner hung the last Christmas ornament on the fireplace display she’d set up in the corner of her shop,
Every Day is Christmas
, when her sister, Dina, called out to her.

Mallory rushed to the front of the store. “See what?”

Dina pointed, “Feast your eyes on the newest guy in town.”

“I see a lot of people trudging through the snow. Which one are you referring to?” she asked.

“That tall guy getting off the bus,” Dina huffed out air. “See,” she pointed. “He’s the only guy carrying a suitcase, for God’s sake.”

“Yeah, he’s okay,” Mallory said and stepped back pulling Dina with her. “Okay, show’s over. Let’s get back to work.”

“Okay?” Dina’s hands flew to her hips, “Okay?” she said with sarcasm. “Is there something wrong with your eyesight? Maybe you need glasses because the hunk I’m looking at is gorgeous. And, he’s alone, Mal. He’s carrying a suitcase. And what makes it even better is there’s no woman hanging off his arm.”

“Yeah, so,” Mallory said in a rush of words. “You shouldn’t be staring at men, anyway. You’re a married woman,” she said sharply.

“You never give up, do you? Well, here’s a news bulletin for you. I’m not interested.”

“Mal, you haven’t dated in two years. Mourning period is over. Dump the black widow clothes and get back in the game. Mitch wouldn’t have wanted you to remain single for the rest of your life. You know that.”

“And somehow Dina, I really don’t care what Mitch would or wouldn’t have wanted me to do. He’s not here to help raise the girls. I am! And I won’t subject another person to their bickering.” She edged away from Dina. “Maybe when they’re older.”

“Oh yeah, that’ll work! You’ll probably be too old by then. Right now, you’re young, you’re beautiful, and dammit, having a man would improve your disposition.”

“What’s wrong with my disposition?”

“Well…nothing.” Dina threw her hands up. “Nothing that a little night of passion couldn’t fix. Catch my drift?”

“Oh, right. That’s it. A romp in the sack would fix all my problems.” She shook her head. “Get real! Now, please come over here and help me fix this display.” Mallory stood in front of the fireplace and rearranged the garland for the tenth time hoping Dina would get back to work and stop gawking at the so-called gorgeous guy in town. “C’mon, I need your help. You’re much better at this arranging stuff than I am.” She eyed the display again and inched closer to rearrange one more time. Stepping back a few inches, she threw her hands up in frustration. “Something’s off and I can’t figure out what it is.”

“It’s just the age,” Dina said as she made her way over and started fiddling with the garland.

“The girls, Mal. You’re pathetic. Aren’t you listening to anything I’m saying?” she glanced off a frustrated look but as usual, Mallory ignored her. Rearranging the garland, Dina draped it down in swirls, then placed the Santa by his sleigh and moved the elves closer to the gift packages. “There. How’s that?”

“It’s perfect. And just what it needed. Your touch.”

“Now back to the subject at hand,” Dina said. “Dating.”

“Perhaps when the girls reach adulthood.”

“Are you kidding me? That’s eight or nine years from now and you’ll be almost forty by then.”

Mallory huffed out a dramatic breath. “Why? You think I’m going to be all wrinkly and in need of a walker at thirty-eight?”

“No. But you’re young and vibrant right now. And you’re too beautiful to be alone.”

“And that’s the key word here little sister, I’m not alone. I have two flippin’ daughters who hate each other.”

“They don’t hate each other. It’s just their age.”

“Right. This comment coming from a woman who has no children?”

“Well, maybe I don’t. But that doesn’t mean I don’t understand children. I want them. And maybe some day I will have them.”

“Exactly!” Mallory said. “Maybe some day. And that’s how I feel about dating.”

Dina raised her brows. “I think you might be passing up the chance of a lifetime. When was the last time we saw a new guy come into town?”

“Dina.” Mallory shouted. “For God’s sake. You don’t know if he’s here to stay, whether he’s here to see his parents for the holidays, or here to get married. He might even be meeting his wife who’s visiting her relatives.” Mallory huffed out air, “You should be a writer with that imagination.”

“Cripes,” Dina said, slapping her hands against her thighs, “if you’re not the ghost of Christmas past. If there was a woman involved, she would have greeted him when he got off the bus.” Dina blinked her eyes in disgust and walked toward the front of the store for another look. Mr. Tall, dark and handsome was headed right for the shop. “Mal,” she squealed like a teenager, “He’s headed this way!”

“Nice try, little sister.” Dina gave a toothy grin. “He’s all yours, sweetheart. I’m outta here.” The words were no sooner out of her mouth than the whoosh of the door closing echoed in Mallory’s ears.

Arden J. Miller pushed the door open into the Christmas shop and looked up when he heard the chimes tinkle out
Jingle Bells
. He smiled, shut the door, and reopened it again. Mallory rolled her eyes, tired of the redundancy. She’d thought of removing the chimes many times but once potential customers heard the tune, they usually stayed and walked out with a big bag full of items for the holidays.

When the door whooshed again without another sound, she grinned and walked back out into the showroom, thankful he’d gone. That is, until she heard him banging his shoes against the wall. Not more than a minute later,
Jingle Bells
played again and he was back inside wiping his wet shoes on the runner by the door. And now it was too late for her to run—he’d already seen her.

“Mmm,” he inhaled, “it smells like Christmas in here.” He snickered. “That was a dumb thing to say. I guess that’s what you’d expect from a Christmas shop, isn’t it?”

Mallory gave a nod of her head instead of vocalizing agreement. There was no way she was going to humor him or attempt to make small talk. One look at his gorgeous face, the one that was even hotter up close, told her uttering even one word would have her tripping over her tongue.
Damn that Dina for leaving me alone
, she thought. Another surge of nerves rushed through her body and gave her a prickly-like feeling as though she’d been zapped by an electric current. A glance at her shaky hands was the last straw. She rushed to the back room to regroup, embarrassed that seeing a good-looking guy made her act like an idiot. He wasn’t the first good-looking man she’d ever seen. But then, it wasn’t his good looks that bothered her; it was what they did to her.

Peering at him between the crack of the opened door, she saw him shiver. “Boy, it sure is cold out there,” he said, “and so nice and toasty in here. I’m going to need a gallon of hot chocolate just to warm me up.” He must have noticed she was gone. “Hey, where’d you go?” he said. She was caught off guard by the deep tone of his baritone voice.

“Be right out,” she shouted.
How ironic
. With Christmas only a few weeks away, the store, normally hopping with customers at this time, was empty this morning. A flashback of Miriam’s Tarot card reading breezed through her mind. Yeah, like those cards could really predict she’d be meeting a tall, dark and handsome man before Christmas. She snickered at her thoughts. But why was she reminded of this specific prediction? She harrumphed. The last thing she needed was a man to turn her world upside down.

Miriam and Dina, the two fortuneteller wannabe’s came to mind. Yeah, they were fortunetellers all right. They’d been feeding her these predictions for years and nothing ever came of it—not that she expected it. She released a low chuckle. They reminded her of the manikin who sat in a glass booth on the boardwalk at Seaside Heights who spit out your future for a quarter. At least they provided her with amusement. Mallory shook her head trying to knock some sense into her thinking. This business with Mr. Tall, Dark and Handsome was all a coincidence. She’d never believed in that voodoo crap before and she wasn’t about to start now.