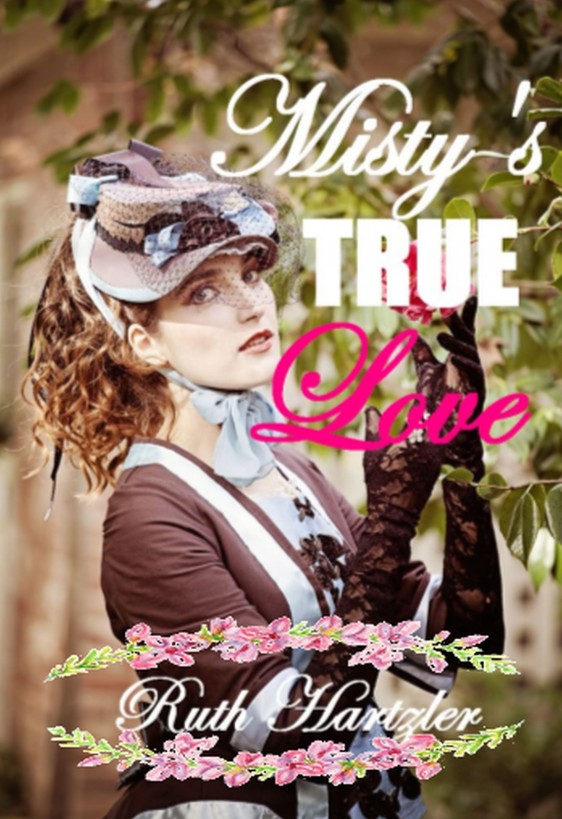 This ebook is licensed for your
personal enjoyment only. This ebook may not be resold or given away
to other people. If you would like to share this book with another
person, please purchase an additional copy for each person you
share it with. If you are reading this book and did not purchase
it, or it was not purchased for your use only, then you should
purchase your own copy. Thank you for respecting the author’s hard
work.

Next Book in this Series

Other books by Ruth Hartzler

Misty fiddled nervously with the
letter in her lap as she stared anxiously out the window of the
lumbering train. The first rays of the morning light were just
starting to peek over the horizon. While the morning fog obscured
the mountains on the horizon into ghostly silhouettes, Misty was
only too aware that the rocky hills and vast plains stretched out
for miles.

These had become familiar sights to
her on her long train journey, scenes a world away from San
Francisco. This was nothing like the vacations her employers used
to take. During those she was too busy tending to the family to sit
and watch the scenery. She could not even remember the last time
she had so much time to be idle. For years she was Indiana’s lady’s
maid, and then after the earthquake, she had cared for her elderly
aunt. If her aunt had not died, she would not have answered the
mail order bride advertisement and now been on the train to
Wyoming.

Misty tried to peer ahead of the train
to see if she could spot a glimpse of her destination. However, she
could not see any sign of civilization. It was both exciting and
unnerving to see so much empty space stretching out in all
directions.

She tried to close her eyes again as
she shifted on the wooden seat. A train was certainly the most
convenient way to travel, but even the most patient person could
grow tired of the same sights and sounds for days on end. The
simple wooden benches were made a little more comfortable with thin
cushions. The windows had a thick pane of glass, tinted by the soot
of the coal engine pulling the train along at a steady pace. A few
deep red carpets were nailed to the floor to give the place a
splash of decorum.

But goodness, one could only take so
much rocking and rumbling in a span. The cabin seemed to feel more
confined by the hour. Misty took out a small lace fan and waved it
gently under her chin. It had been a gift from Indiana. She smiled
gently as she thought back on the young lady. If there was anyone
who had an angel watching out for her, it was the young miss. It
still boggled Misty’s mind how events fell into place in the
end.

She glanced down at the letter and
smiled gently. She should have written Indiana to let her know that
she was arriving. But at the same time, she did not want to be
fussed over at the station, not when she had a special meeting to
attend to first.

It had started on a whim of sorts. She
had been browsing through the papers to seek a new employment.
While the severance pay that Indiana and her new husband left her
was very generous, she could not hope to live on it indefinitely.
Unfortunately, there was very little demand for a maid of her
station. And most other positions had no use for a young woman,
particularly one who acted as a full-time caretaker to a bedridden
aunt.

In the back of the paper were ads for
people looking for a bride. After seeing poor Indiana deal with
that dreadful man from Texas, Misty was skeptical of the whole
thing. How do you commit your life to someone you have never met?
Plus there was the risk of deception. After all, one never really
knew who really was on the other end of the Pony
Express.

But one could daydream, though. Misty
found herself intrigued as she read through the ads, written by
ranchers in Texas and Oklahoma, miners in California, homesteaders
in the prairies, each with a story to tell about their homes. It
had become a guilty pleasure to fantasize what it would be like to
live in such places, a wife to a wealthy citrus farmer in the East
or a fur trader in the Northern wilderness, or perhaps a wealthy
businessman, hiring maids of her own. Her imaginings were a
pleasant diversion. Caring for the dying could put a person in a
poor frame of mind.

One day, a particular letter had
caught her eye. A man from Pioneer Town was seeking a ‘practical,
level headed woman’. He was seeking out a wife and partner to help
run his ranch. No word about physical appearances, only that the
person be in good health.

Indiana had told her many things about
Pioneer Town. It was where her husband, Morgan, was from. They were
very liberal about women’s rights in that region according to her
friend. The sisters would never need to fear a rushed marriage in
that region to get by. It was still hard to imagine it in practice.
She found herself intrigued by the letter.

She had set it away at first. The ads
were just a fantasy for her, little else. She could not see herself
running out the door to a mysterious man. With her luck, she would
end up with a man like Indiana’s near-fiancé, slovenly, rude brute
that sought someone to dominate and work to the bone. She had no
desire to be trapped in such a situation. She doubted that she
would have a handsome rescuer to save her from her
plight.

The ad weighed on her mind, however.
She found herself returning to the paper again and again to read
it. It was in the same town in which Indiana lived with her mother,
sisters, and husband. It sounded wonderful. A great town. Vast
territories. Acres of fields housing crops and cattle. Gorgeous
sunsets over the distant mountains. The letters that Indiana sent
her painted it almost like a faerie tale.

Misty went back and forth over the ad
for nearly a week. It was impractical to think these ads would
actually work out well, but at the same time, something about it
intrigued her. If nothing else, a growing ranch might need a maid
to tend the home and a growing family. After hours of agonizing and
rewriting, she finally sent a brief letter of introduction to the
address provided in hopes that it would finally stop haunting
her.

Misty had hoped that she could move on
after finally reacting to the ad, but instead she found herself
visiting the post office religiously each day. Sometimes she found
an excuse to visit the town a second or third time. She often
chided herself for behavior, knowing that it was silly to get
worked up over the whole thing. Yet no matter how much she chided
herself, she continued to obsess over receiving a
response.

She had never imagined that she could
feel so excited and panicked at the same time. When she finally
received her first letter from Mr. Claudius Mills, she could not
bring herself to open it right away. She felt an overwhelming dread
that it would be a polite rejection. It was a shock to her how much
she had invested in the event, given she was not a staunch believer
in mail order brides.

But instead, she found herself
entranced. Claudius seemed warm and friendly. While she had no idea
what he would look like, she could almost see a gentlemanly smile
as she read his thanks for her response to his ad. He spoke of his
ranch, and how he worked to run it.

Misty found herself reading the letter
even more than she had the ad. It had been a temptation to take up
her stationary and write Indiana to learn what she might know of
Mr. Mills. As a local resident, she would surely have heard
something of their reputation in Pioneer Town. But she could not
bring herself to do it. It felt silly and school girlish to hound
her friend for information, especially when it was a man she never
met face to face.

Over the coming weeks, she and Mr.
Mills began to correspond with one another. In the beginning, it
felt as if she had gained a pen pal. They spoke of their homes and
their interests. As time went by, he started to tell her about
happenings at the ranch, and she told him about her days. She
imagined it had to be terribly dull to read about a woman tending
her elderly aunt. Yet he always inquired after her aunt’s health
when his letters came in. She found herself looking forward to each
letter as time went by.

When her aunt passed away, it was a
dark time in her life. Even though it was expected, the loss of a
family member was painful. The woman had been a gentle soul, if
strict. She did not support Misty being courted by letter, but she
did not try to dissuade her either, during her moments of
lucidity.

When Misty had written to Claudius
about her aunt’s passing, one letter had come faster than the
others. He insisted that she should not be alone in a large city
like San Francisco. A young woman had a hard time in this region
without a husband or male kin. Misty knew that only too well—it was
part of why Indiana and her sisters were put in a desperate
situation a few months back, when Indiana was forced by her mother
to seek out a husband from the ads. It had been divine intervention
that saved them from a rushed fate.

It had been a surprise to her when
Claudius invited her to come up to his ranch. He insisted that
there was no pressure to marry on the spot. He wished a chance to
meet her in person, and it would set his mind at ease to know she
was not alone in the city.

She shook herself from her musings as
the train rattled over a rough bridge, holding her breath as she
tried not to look out the window at the vast expanse below. While a
train felt safe and sturdy on flat land, she had far less faith in
the thin bridges. She felt her heart race as she tried to ignore
the vulnerable wood and rust colored metal supports.

“
It’s perfectly safe,” she
murmured to herself in reassurance as she took out the letter out
of its envelope, and read. ‘I am relieved that you accepted my
invitation. I took the liberty of enclosing a ticket for your
travels. If you need anything at all, please do not hesitate to
tell me. I will meet you at the station on the day of your arrival.
My family is eager to meet with the young lady with whom I have
been corresponding. However, after much persuasion, I have
convinced them to allow us to meet in private. I trust you will not
feel too overwhelmed. We tend to be a lively group.’ She could
almost see him pace and fidget as he tried to think up everything
she might need to know.

Small Island by Andrea Levy
Intrigue (Daughters of Mannerling 2) by Beaton, M.C.
A Baby and a Betrothal by Michelle Major
Odd Jobs by Ben Lieberman
Torn By War: 4 (The Death Wizard Chronicles) by Melvin, Jim
The Dover Anthology of American Literature Volume II by Bob Blaisdell
A Cougar Among Wolves by Kali Willows
Manipulation (Shadows) by Perry, Jolene
Pieces of Olivia by Unknown
Fearless Love by Meg Benjamin
Our partner