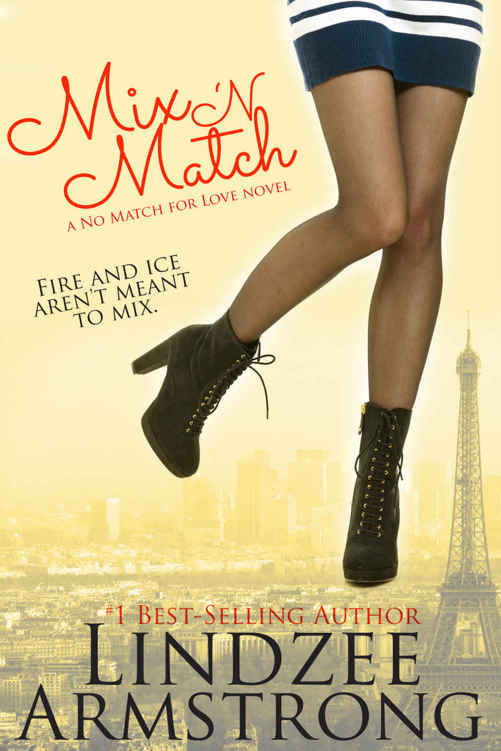 Get a Free Story!

Get a Free Story!

Enjoy the Rest of the Series!

Other Books by Lindzee Armstrong

Dedicated to my sons, Jaxson and Hayden,

who guarantee that every day is an adventure.

Zoey took a sip of her champagne, watching the crowd of philanthropic do-gooders. Twinkle lights were strung over the outdoor patio, giving the space a festive feel that was almost out of place at a charity event. She rolled her neck back and forth, trying to shake off the annoyance with her best friend, Brooke, that had plagued her all night.

She couldn’t hold Brooke accountable for something Zoey had never told her about. Brooke had no idea that Zoey was running a makeup artistry business on the side, or that a big name was giving a lecture at a downtown hotel right now.

She really should tell Brooke she wanted to quit Toujour, the matchmaking firm they both worked for, especially since Brooke was now her boss. But she hadn’t been able to disappoint her friend. Not with the paps—paparazzi—doing their best to ruin Brooke and Luke’s upcoming wedding. Zoey never would’ve guessed being engaged to a rich-and-famous business tycoon would come with so much baggage. But as maid of honor, Zoey was doing her best to help Brooke through it. Even if it meant missing the lecture to attend another charity event.

It was fine. Totally, completely fine. There would be other lectures, and this party wasn’t half bad. The charity—Footsteps for Change, a dance center for youth in crisis—played upbeat Top 40s tunes instead of the dry instrumental music common at these events. The suffocating California summer sun had set, taking with it most of the heat and leaving the night air a pleasant temperature. As far as charity events went, this one was an A plus. She might as well enjoy it.

“Get out!” someone shouted.

Zoey whipped her head around, trying to locate the voice in the sea of people. She saw Luke almost immediately, Brooke hanging on his tuxedo jacket and looking scared. A small crowd had already started to gather around them.

Crap. Zoey speed-walked to the commotion, not letting her six-inch Christian Louboutin heels slow her down.

“I have a press pass,” an unfamiliar man said, shoving his badge in Luke’s face. He was tall and beefy, and muscles bulged the arms of his poorly tailored suit.

“Who are you with?” Luke yanked the badge out of the man’s hand, then tossed it aside in disgust. “A tabloid? Who let you in?”

“France seems like an obvious choice for a destination wedding,” Press Pass said. “Toujour is headquartered there, and it’s rumored you own an apartment in the city.”

“Leave now, or security will escort you out,” Luke said.

Zoey would drag the man out herself if she had to. Anger boiled within, and she struggled to push her way through the crowd.

“It looks like you’ve put on a little weight, Brooke,” Press Pass said. “Are you waiting until after the baby to announce a date?”

Brooke’s hands flew to her flat stomach, and Zoey gasped. Her heels were glued to the cobblestone, and she couldn’t make herself move.

Luke grabbed Press Pass by the lapels, but the bulky man didn’t even blink.

“My sources say your ex-fiancé was in town a few months ago on business. Are you sure the baby isn’t his?” Press Pass asked.

Luke pulled back his fist, and Brooke shrieked, grabbing Luke’s arm. Zoey pushed aside a woman in a sequined dress, fighting her way to her best friend.

“Hit me,” Press Pass said. “I’d love to file charges against you.”

Zoey let out a growl, nudging another person aside. Luke would hit Press Pass if he didn’t shut up.

A man broke through the crowd, his back ramrod straight and his suit perfectly pressed without so much as a wrinkle. The whites of his eyes stood out in the chocolate of his skin, curly black hair cropped close to his head.

Relief flooded Zoey—Mitch always knew how to handle the press—followed immediately by annoyance at his lack of faith in everyone but himself. A radio was already in his hand, efficient as always.

Zoey had admired that efficiency when he’d kissed her breathless in a quiet corner of a restaurant all those months ago. She’d love the way he’d commanded that moment.

She forced her lips into a scowl and pushed the memory away. She’d been an idiot to let that happen.

“Security’s on their way,” Mitch said, placing a steady hand on Luke’s arm. “Don’t do it, man.”

Luke shoved Press Pass away, and he laughed. Brooke wrapped her arms around Luke, her eyes luminescent with tears.

Three weeks until the wedding. There was no way they’d be able to keep the exact date and location a secret for another twenty-one days.

Two burly men in suits pushed through the crowd, their ferocious glares screaming
security
. They dwarfed Mitch, with his lanky frame and perpetually youthful face. Not that his arms had felt lanky when holding her tight. They’d felt strong and capable and oh-so-good.

“Your people are the ones who let me in here,” Press Pass protested as the security guards each grasped an arm.

“And now we’re withdrawing our permission,” Mitch said in that obnoxiously calm voice.

Press Pass let out a growl, his face bright red and shiny from perspiration. He yanked his arms free and stomped away, the security guards following close on his heels.

“Are you okay?” Zoey asked Brooke, pulling her in for a tight hug.

Brooke nodded, leaning into Luke. “He kept following me.”

“I’m taking Brooke inside.” Luke wrapped a protective arm around her. “Put him on the black list immediately.”

Mitch nodded, pulling out his phone. “I’m on it.”

Anger coursed through Zoey as she watched Luke lead Brooke away. She folded her arms and glared at Mitch. “Way to go, Best Man. How’d he get on the guest list?”

“Luke’s secretary went over it, not me. I won’t make that mistake again.” Mitch neatly placed his phone back in his pocket.

“I thought making sure the paps stayed clear was part of your job.”

“After tonight, I’m adding it to the description.”

“Well, isn’t that fantastic.” Zoey tossed back the rest of her champagne and set the glass on the tray of a passing waiter. Her purse slipped, falling down her arm and clattering to the cobblestone, right in front of Mitch.

Mitch bent to grab it, but someone else was already crouched near the floor, scooping up the small beaded bag.

“Beautiful women shouldn’t have to pick things up from the floor,” he said with a handsome smile, handing her the purse. He was perhaps ten years her senior, his dark hair dusted with gray, but in a way that looked intentional and not a result of age. It suited him.

“Thank you,” Zoey said, taking the purse back. Out of the corner of her eye, she saw Mitch fold his arms and glare at the man.

Zoey already wanted to get to know him better.

“Zoey,” she said, accepting his handshake. It was strong and firm, almost painfully so.

“That was crazy a minute ago, huh? I imagine the press is eager for even a moment with the happy couple these days.”

“Even if they have to lie their way into a party to get it,” Zoey agreed. She felt the burn from Mitch’s gaze, but stubbornly refused to look in his direction.

Alan’s eyes flicked over her figure, then gave a slow smile. “I’d lie my way into a party if it meant meeting you.”

Zoey laughed, putting a flirtatious hand on Alan’s jacket. The fabric was thin and a little coarse, which meant he probably wasn’t as wealthy as her usual type. But he was bold, and she liked that in a man.

She hoped Mitch was watching.

“You flatter me,” Zoey said.

“Not at all. I mean, look at you. Absolutely gorgeous.”

Zoey laughed again, peering up at him from underneath her lashes. “You’re not so bad looking yourself.”

“You work at that matchmaking firm with Brooke, don’t you? I recognize you from the papers.”

“You keep that close an eye on them?”

“No, but yours is a face I’d be hard-pressed to forget. Rumor has it you’re the maid of honor.”

“I don’t know how honorable I am.”

Alan threw back his head and laughed. “Witty. I like that in a woman. How about I buy you dinner? Maybe this weekend?”

Losing the Earl: Regency Romance Clean Read (Yearnings for Love Book 2) by Rebecca Grave
Justice League of America - Batman: The Stone King by Alan Grant
Mr. Monk Helps Himself by Conrad, Hy
The Immortal Queen Tsubame: Ascension by H.D. Strozier
The Adventures of Mr. Maximillian Bacchus and His Travelling Circus by Clive Barker, Richard A. Kirk, David Niall Wilson
Redback by Kirk Russell
MY HOT TEACHER: (Volume 5 of the "My Hot..." series; a stand-alone, New Adult novel) by Johns, Isabella
Jim Henson: The Biography by Jones, Brian Jay
All of Me (The Billionaire Next Door Book 7) by Paradis, Violette
The Cluttered Corpse by Mary Jane Maffini
Our partner