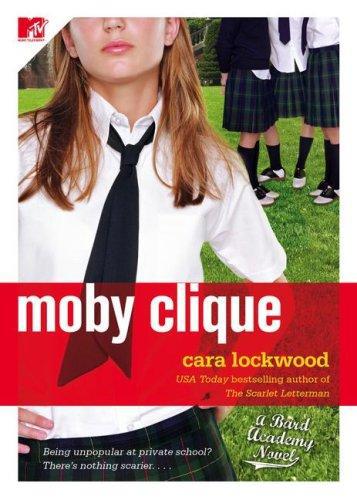 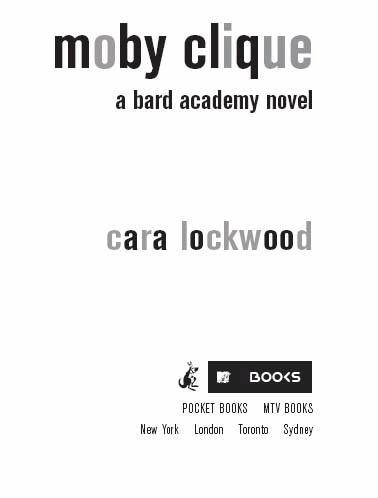 MTV Music Television and all related titles, logos, and characters are trademarks of MTV Networks, a division of Viacom International Inc.

For all my English teachers

A heartfelt thanks to Elizabeth Kinsella, who named this book (second one running!). My great gratitude goes to my husband, Daren, and daughter, Hana, who put up with late-night revisions and much more. I’m grateful to my very savvy editors, Lauren McKenna and Megan McKeever; my agent, Deidre Knight; and everyone at the Knight Agency. Thanks to my parents and my brother, Matt, and the other great supporters of my varsity promotional team: Kate Kinsella, Shannon Whitehead, Stacey Causey, Kate Miller, Jane Ricordati, and Carroll Jordan.

I’m a hundred pages into the Longest Book I’ve Ever Read—
Moby-Dick
—Bard Academy’s summer reading requirement. If you ask my opinion, Herman Melville could’ve shortened this tome by about five hundred pages if he wasn’t so long-winded (I mean, twenty pages alone on the
color white
? Yeah, I got it—okay? The whale is WHITE. Sheesh. Get on with it!).

I glance out the grungy window of my Chicago Transit Authority bus seat and see jet skiers and wind-surfers dotting the horizon on Lake Michigan. I have to take the bus to work because my driving privileges are still revoked (see: Dad still holding a grudge about his totaled BMW from a year ago). Looking at the long stretch of water, I find myself wondering what it would be like if that whale came to life. I can almost imagine a wave becoming a giant whale, rising up, and swallowing three jet skiers whole.

A bike darts in front of the bus and the driver slams on the brakes, throwing me forward and nearly making me drop my book. For an instant, I feel adrenaline running through my veins and my muscles tense up, ready for a fight. I half expect Moby Dick or some other menacing fictional character to appear out of nowhere. I have to remind myself that those things don’t happen out here in the real world. My heart rate slows down and I take a few deep breaths. I’m not at Bard. Not where ghosts walk the halls and fictional characters come to life. That was just another posttraumatic Bard moment.

But some of you probably never heard of Bard.

My dad sent me away to delinquent boarding school (Bard Academy) for my sophomore year after wrecking his Beemer. But what he doesn’t know is that Bard is not your ordinary, run-of-the-mill boarding school for delinquents. It’s staffed with the ghosts of famous writers, and fictional characters sometimes come to life and wander the campus. This is Bard’s big secret, but few people know it. Just me and a few of my friends. And by the way, we managed to save the school (oh yeah, and the world) twice from total annihilation. You see, not all the ghosts there are good ghosts. I found that out the hard way.

I close the book on my lap and take a deep breath. At Bard, some books hold special powers. But out here, away from school, the book is just ordinary, I remind myself. Nothing to worry about.

Still, just in case, I tuck the book snugly into my backpack. You never know.

I glance out the window and recognize the strip shopping mall where I work. I’m about to miss my stop. I grab my bag and push open the back door, then step out into a humid August day. There, glaring at me in hot pink, is the sign I’ve come to hate. It reads “In the Pink” and it hangs above the store that belongs to my Dad’s third wife, Carmen. I’ve been forced to work here all summer without pay to help “offset my Bard tuition,” which is how Dad puts it. I never thought I’d see something scarier than some of the ghosts I’d come face-to-face with at Bard Academy, but Carmen’s shop is one big horror show. There are pink plush toys, pink garters, pink toothbrushes—and (serious
ew
here) pink edible underwear. It’s nice to know that instead of saving for my college education, Dad has opted to fritter my tuition away on inflatable flamingos and posters of pigs in ballet tutus. Clearly, In the Pink (or, as I like to call it, In the Puke) is of so much more social significance than, say, me becoming a doctor and one day curing cancer. Not that I would, but In the Pink definitely isn’t going to.

“You’re late,” Carmen says to me the minute I walk through the door. She’s snapping pink bubble gum at me as she tosses a pink, furry boa over my head. This is what she forces employees (i.e., me) to wear. I glance up at the clock.

“Technically, I’m an hour early,” I tell her, nodding at the giant neon pink clock in the shape of lips on the wall.

“Like half of the stuff in here,” I mumble, but she doesn’t hear me.

“Honestly, Miranda. If you were mine, I would seriously think about disowning you,” she says. This is Carmen’s idea of being warm. My “stepmom,” who hasn’t been able to keep a goldfish alive and has the mothering instincts of a brick, is twenty-six. That’s not even a decade older than I am. This is why I sometimes call Dad a pedophile just to see him get mad. It works every time.

I ignore her and take up my place behind the cash register. I plunk down my bag and open up
Moby-Dick
. There aren’t exactly dozens of people clamoring to buy broken lip clocks.

“Reading? Again?” Carmen scoffs. “I don’t know what’s gotten into you since you’ve been back from Bard Academy, but you’re reading
way
too much. You
know
reading causes you to have to wear glasses. And that would just spoil your whole face.”

I want to tell her that never having read a book in her life has probably spoiled her whole brain, but I managed to bite my tongue. Comments like that just make their way straight back to Dad, and then he threatens to send me off to juvenile detention. As it is, I’m just three days away from heading back to Bard Academy for my junior year. Normally, I’d be dreading it. But, recently, I’ve found myself actually wanting to get back to Bard.

In some ways, the real world just seems so, well,
boring.
Besides, at Bard, I’m someone special. Turns out I’m part fiction, distantly related to Catherine of
Wuthering Heights
fame. At Bard, I’m more than just my dad’s child support payment or Carmen’s surly employee. I really am someone. Someone who saved the school. Twice. Here, I’m just one more underappreciated adolescent taking the bus and working a grunt job.

“Anyway, I’ve told you
a million times
that you can’t read while we have customers,” Carmen scolds as she wraps a long piece of her newly highlighted hair around one finger.

I glance up and around the store. There are no customers. Not unless you count the eighty-year-old woman who’s been nosing around the fifty-percent-off bin. As I look up, she picks up a pack of edible underwear, sniffs it, and then drops it back in the bin.

“No reading while we have customers,” Carmen says. “We have an image to uphold.”

I can think of a million smart things to say here. Like the fact that I’m sorry to be reading when we’ve got such a
stampede
of customers lining around the block to buy pink Post-it notes that say “Queen of Pink” on them. Or the fact that I can’t see how
Moby-Dick
would do anything but improve the image of a store in a strip shopping mall stuffed between a dry cleaner’s and a Dunkin Donuts.

Instead, I settle for, “Oh yes, we’re the model of sophistication,” while I hold up a pink roll of condoms in a package shaped like a lollypop.

“Shut up,” she snaps, because Carmen never can think of anything smart to say back to me. Dad certainly didn’t marry her for her sparkling personality, that’s for sure. She grabs the neon condoms out of my hand and puts them on a nearby shelf.

Three more days
. Only
three
more days. And then I am out of here and back to Bard, and to…my complicated love life. In one corner, there’s my ex, Ryan Kent, state championship basketball player. Gorgeous. Smart. Sweet. And totally uninterested in dating me anymore. In the other corner, there’s Heathcliff. Brooding. Mysterious. Serious bad-boy mojo. And completely off-limits because he’s a) a fictional character, and b) did I mention he’s fiction? He is the original bad boy from
Wuthering Heights
and the Bard faculty told me explicitly that I couldn’t date him because he doesn’t belong in this world.

Regius by Nastasia Peters
Dragon Choir by Benjamin Descovich
Child of the Prophecy by Juliet Marillier
Chasing the Storm by Martin Molsted
Wife of the Gods by Kwei Quartey
Rubicon: The Triumph and Tragedy of the Roman Republic by Tom Holland
The Wicked One by Suzanne Enoch
Purebred by Bonnie Bryant
13 Little Blue Envelopes by Maureen Johnson
Mockingbird by Sean Stewart
Our partner