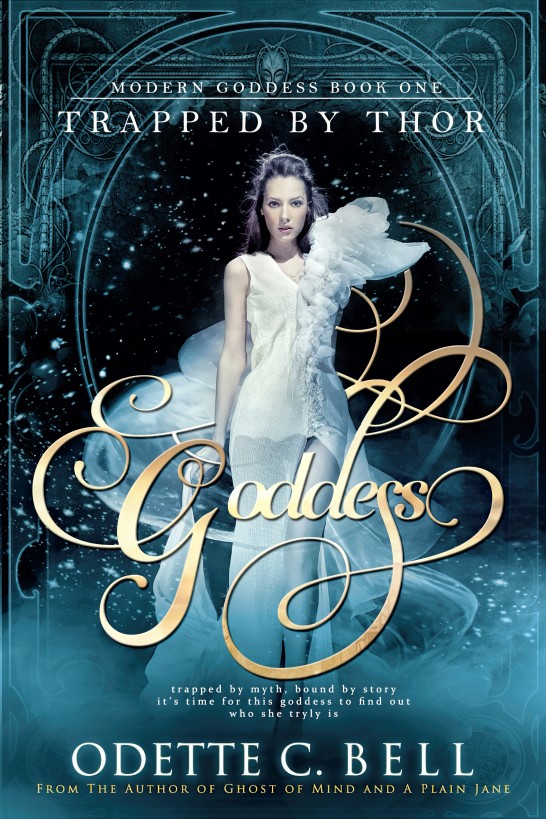 All characters
in this publication are fictitious, any resemblance to real
persons, living or dead, is purely coincidental.

“
I’m afraid the rules are
non-negotiable. If you don't like them, you don't get to go to
Earth.” I stared at the mountain of teeth, stone-carved skulls, and
grass skirt in front of me.

“
No,” I corrected, hands arranged
on the desk, “You are a god. Look around,” I gestured to the
building around us – the one made of flickering, glistening glass
and diamond, “We are all gods here. The rules are the rules. If you
want to go to Earth for a vacation – or whatever you have planned.”
I flicked my gaze at him over the top of my glasses. I didn't have
a vision problem – I was a fully-functional goddess – but the
glasses added something to my demeanor cheaper and easier than
lightning bolts and tidal waves. “Then you have to play by the
rules. No god, goddess, or demi-god can be cleared for entry into
Earth unless they agree to uphold the rules and to be held
accountable to them should they...” I traced a finger down the file
on my desk, “Decide to get creative.”

He clenched his jaw. The necklace of
actual skulls around his neck jittered to the side, and each of the
skulls turned their hollow glares on me.

I stared back over the top of my unnecessary
glasses.

“
I have killed warriors,”
the god growled, the runes and symbols painted across his face (in
what looked like permanently fresh blood) glistened as he shifted
in the light, “I have killed men, I have killed gods—“

“
Really?” I leaned back and
pretended to be impressed. “I suggest you go hand yourself in to
the Divinity Police. Times have changed, Mr,” I glanced back at his
file, “Balang, and we tend to frown on that type of thing these
days. Plus, if you are trying to convince me that you are a stable
and reliable enough sort of fellow to be let loose on the streets
of Earth, I suggest you tone down the murder talk. If you want to
be let in,” I smiled wanly, “Sign the damn contract.” I refrained
from asking him to sign the goddamn contract, though the word was
on my lips. Goddamn had a different meaning when you yourself were
a god.

Balang looked ready to kill me.

I didn't react. I'd seen this type of thing
before. I’d been looking at godly tantrums for centuries.

“
I’m afraid unless you sign that
contract, you will not be allowed through customs,” I pointed out
one final time. “If the details are not in place, you will not be
allowed entry.”

Balang settled. From his file, he was one
of those composite gods. Death, destruction, war, crops – you name
it – he stood for them all. A lucky thing. For now he was stepping
aside from the warring side of himself and falling back on the
crop-growing side – the side that appreciated the logical,
methodical, sensible approach to growing maize, potatoes, and
signing necessary divine contracts in order to process his visa
application.

He didn’t mutter a “Fine,” or an “Okay
then.” He grabbed the scroll and scribbled his name across it using
the pen propped in an inkwell on my desk.

I let out a small sigh. Thank god for
that. I smiled at the thought. Thank god because it was a god who’d
presided over this victory – me.

What was I the goddess of? What particular
skills did I have to bring to this situation? Details. That's
right, facts. No fancy elements or abstract concepts for me, thank
you very much – just the parts that constitute the
whole.

Throughout all the pantheons that existed
there were all sorts of extraordinary gods and goddesses –
creatures who stood for and symbolized the greatest forces of the
galaxy. In the human pantheon alone you had gods of thunder, death,
war, wisdom, and love. They lived their lives through and commanded
those forces.

They were the big guys.

Then
there was me. I stood for details. I
couldn't call the denizens of the dead from the underworld. I
couldn't command the oceans to rise up. I couldn't inculcate wisdom
into a man's soul. I could, however, dot my i's and cross my t's.
Which made my job perfect for me.

As soon as Balang signed his scroll – which
bound him physically to the rules of the Integration Office – he
stood, his necklace of skulls indignant. He marched away
immediately without as much as a “Goodbye.”

I watched him go, the light streaming in
from the sun behind me catching each leaf in his grass skirt. When
he disappeared down the great glass stairs that led through customs
down to planet Earth, I gave a hearty sigh.

I cleared my throat and glanced at the
clock. It was time to go home.

I scanned my office one last time, nodded
in satisfaction that everything was where it should be, then closed
and locked the door.

“
Knocking off then?” one of the
cleaning gods asked from down the corridor as I headed for the
stairs.

“
See you in the morning,” he
mumbled back.

“
Yes,” I confirmed. I walked
for the glass steps and took to them gingerly.

Oh yes, it was an important job, and one I
took very seriously. I was Officina, goddess of details and
facts.

I stopped past the shops on my way home to
pick up some cat food. I lived in a nice but modest cottage on the
edge of a city. I had roses, a well-kept lawn, and a nice white
clean kitchen where I baked things like muffins and pies. I spent
my time – when I wasn't working – poring through books and
catalogues of data. I was never more at home than when I had
information before me, and the more specific, the better. Numbers,
calculations, variables, patterns – I didn't watch television like
some of the entertainment gods when I got home from work, I
studied.

Surrounding myself with hundreds and
thousands of facts made me feel alive. It made me see the divinity
in the universe and, importantly considering what I was, the
divinity within. The universe literally opened up for me when I had
my nose stuffed into a book of weather facts or an almanac or a
catalogue of engineering tools.

By the time I made it through the front
door the sun was already setting. It was strange seeing it from far
away again. The Integration Office was located, of all places,
right next to the sun. It was made of diamond and glass. It didn’t,
however, melt or burn to a cinder. It was constructed and run by
gods, not humans. No one complained of being blinded by the light
streaming in through the great glass windows – though they offered
an unshielded view of the sun's bubbling corona. Only gods bothered
going through the Integration Office.

After work, each night I would come home
to my Earth cottage. Unlike some of the other divine
permanent-residents on Earth, I didn't bother living in the
abandoned ruins of some temple, castle, or palace. I’d gone for an
affordable delicate cottage on the outskirts of a large city. I had
a small pond with tadpoles and frogs, and rows of neat white roses
along the fence. I wouldn't trade those for all the semi-abandoned
sacred ruins on Earth.

I had a library, too – a great, grand,
wide library. Mundane things like frogs and roses aside, my library
wasn’t... ah... normal. Technically, when you stepped into the room
between my lounge and bedroom, you came upon a rip in the
space-time continuum. A rip that took you to any library that had
existed on Earth: the Library of Congress, the Library of
Alexandria, and every public library you could think of. I would
grab a great handful of books after making my dinner and before
sitting down in my lounge room, and every night I would read
through them all.

It was how I liked to live my life. Or
rather, it was how the divine quality of details and facts
established itself within me.

Not all gods were like me. There were a few
gods and goddesses who had been granted permanent residency on
Earth. Some of them chose to live like hermits in the forest,
flitting through the darkened ruins of their once great temples.
Still others abandoned the old for the new and became rich – but
apparently ordinary – women and men of power and play.

They didn’t, however, break the rules.
While using your godly powers to create small space-time rifts in
your living room didn't break them, the rules forbade direct
interference with the human populace. That would break the rule of
Freedom of the Will. The rule which stated all creatures – all
beings, from slime molds to birds to humans to non-corporeal energy
entities – had the freedom to choose the ultimate direction of
their lives. Break that rule – interfere in such a way that a
person loses their freedom – and you go straight to Divinity
Prison.

There were other rules, too. The business
of keeping Earth safe was an important one. There were a great many
burgeoning life forms on this planet, all trying to figure out
their place in the universe. Despite a god or goddesses’ ultimate
predilection – be it to wisdom, death, or war – they had to
safeguard the sanctity of life. These days that meant staying out
of things and letting all those entities figure it out for
themselves.

Us gods and goddesses were still creatures
and still had rights, though. If a god of war wanted to visit a
temple of peace on some far-off planet, he could – as long as he
didn't get creative halfway through his holiday and start carving
up the monks for some light exercise.

As long as people respected the rules of
integration – and people included gods – they were free to go
anywhere and explore whatever experiences they may.

All you had to do was accept to live and
behave in accordance with the rules. Yes, that often meant leaving
the golden chariots pulled by man-sized scarabs at home, along with
your marching army of dead and angry warriors. But it wasn't all
bad. You could bake pies, you could read books, you could walk on a
street full of humans and watch their expressions, emotions, and
lives – all without anyone knowing who or what you were.

I did love to watch. Some of the other gods
– like the ever-irritating Thor/Zeus/Jupiter – would prefer to be
sitting on a mountaintop throwing lightning bolts at goats, but
they had to find other ways to indulge their creative passions
these days.

The Vacant Throne: The Legend Of Kairu Vol 3 by Tim McFarlane
A Broken Bond by Stacey Kennedy
The Tide of Victory by Eric Flint
J. H. Sked by Basement Blues
Dawnsinger by Janalyn Voigt
Indiscreet by Carolyn Jewel
The Chatham School Affair by Cook, Thomas H.
1 Dead in Attic by Chris Rose
TOMMY GABRINI 2: A PLACE IN HIS HEART by Monroe, Mallory
The Cheesemaker's House by Jane Cable
Our partner