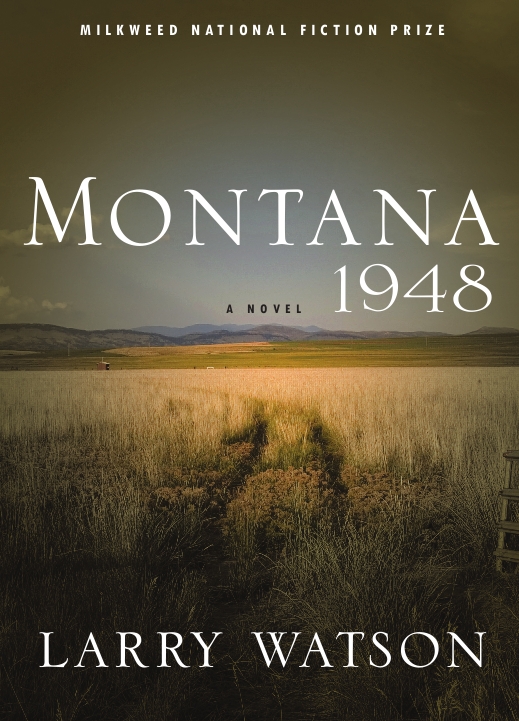 “A narrative that can be read purely for the pleasure of a good story. But Watson is after something smaller and larger—a quest for personal integrity within a community that doesn’t seem to want the truth; an understanding of the complexity of justice; a look at corruption behind the ideal of American white men as conquering heroes.”

“The unspoken life of any small town, especially a small, hardscrabble western town, contains a motherlode of raw emotion, morally ambiguous and potentially devastating. Watson mines that vein with both unflinching honesty and complete respect, both for the dignity of the people and the implacability of the landscape.”

“Wonderful. . . . Be prepared to read this compact book in one sitting. Start at 10 P.M. By 11, you’re hooked. You finish in the wee hours, mesmerized by the fast-moving plot, the terse language, uncompromising characterization and insights into life. . . .”

“Utterly mesmerizing. . . . There’s something eminently universal in Watson’s ponderings on the human condition, and it’s refracted through a nearly perfect eye for character, place and the rhythms of language. Fiction at its finest is sometimes hard to find;
Montana 1948
amply fits the bill.”

“Montana 1948
is a superbly rendered novel. The writing is clean, the characters finely drawn, the whole book deeply felt and honest. . . . It is a spare, unpretentious, but riveting book . . . with great sensitivity and subtlety.”

“This short, swift novel . . . packs a wallop. . . . Watson sometimes evokes echoes of Ivan Doig and, of all authors, Harper Lee. . . . Quickly read (you’ll stay up till it’s done), this story will not be as quickly forgotten.”

“Taut, memorable. . . . In crisp, restrained prose, Watson indelibly portrays the moral dilemma of a family torn between justice and loyalty; by implication, he also illuminates some dark corners of our national history.”

“Watson’s story builds beautifully to its surprising yet inevitable conclusion. . . .
Montana 1948
is a satisfying read.”

“Larry Watson handles each of his characters with considerable skill. . . . The memoir-like tone of
Montana 1948
is one of its great merits and pleasures; and Larry Watson, who grew up in nearby North Dakota about the same time, knows his isolated Montana locale inside out, from the distinctive redolence of Bentrock’s bowling alley to exactly where the trout lie on the Knife River.”

“A real page-turner. . . . Very thoughtful, very artistic, beautifully written. In short, it has everything. Watson’s portrayal of a small-town family at mid-century is zero to the bone. . . . And small-town life? Watson’s description recalls
To Kill a Mockingbird
. . . . So just go out and buy this book and read it.”

“It is, first and foremost, a good story, told in a direct, seemingly artless prose. It’s a brilliant evocation of time and place. And it is the story of this country, of power and racism.”

“A lean, gaunt narrative rich with implication. . . . A literary page-turner, morally complex and satisfying in its careful accumulation of detail and in its use of landscape to reveal character.”

“Straight-to-the-kill . . . [with] vivid, living characters who speak truly. The style of
Montana 1948
is as thin, clear and crisp as a North Dakota wind.”

“Watson builds a simple but powerful tale. . . . The moral issues, and the consequences of following one’s conscience, are made painfully evident here. Watson is to be congratulated for the honesty of his writing and the purity of his prose. Highly recommended.”

“A novel whose power comes not just from fine writing, but from a fast-moving plot.” 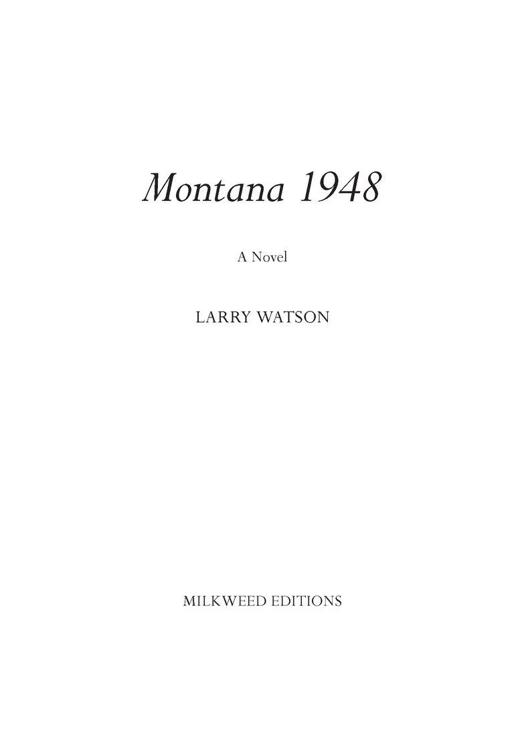 F
ROM the summer of my twelfth year I carry a series of images more vivid and lasting than any others of my boyhood and indelible beyond all attempts the years make to erase or fade them. . . .

A young Sioux woman lies on a bed in our house. She is feverish, delirious, and coughing so hard I am afraid she will die.

My father kneels on the kitchen floor, begging my mother to help him. It’s a summer night and the room is brightly lit. Insects cluster around the light fixtures, and the pleading quality in my father’s voice reminds me of those insects—high-pitched, insistent, frantic. It is a sound I have never heard coming from him.

My mother stands in our kitchen on a hot, windy day. The windows are open, and Mother’s lace curtains blow into the room. Mother holds my father’s Ithaca twelve-gauge shotgun, and since she is a small, slender woman, she has trouble finding the balance point of its heavy length. Nevertheless, she has watched my father and other men often enough to know where the shells go, and she loads them until the gun will hold no more. Loading the gun is the difficult part. Once the shells are in, any fool can figure out how to fire it. Which she intends to do.

There are others—the sound of breaking glass, the odor of rotting vegetables.... I offer these images in the order in which they occurred, yet the events that produced these sights and sounds are so rapid and tumbled together that any chronological sequence seems wrong. Imagine instead a movie screen divided into boxes and panels, each with its own scene, so that one moment can occur simultaneously with another, so no action has to fly off in time, so nothing happens before or after, only during. That’s the way these images coexist in my memory, like the Sioux picture calendars in which the whole year’s events are painted on the same buffalo hide, or like a tapestry with every scene woven into the same cloth, every moment on the same flat plane, the summer of 1948....

Forty years ago. Two months ago my mother died. She made, as the expression goes, a good death. She came inside the house from working in her garden, and a heart attack, as sudden as a sneeze, felled her in the kitchen. My father’s death, ten years earlier, was less merciful. Cancer hollowed him out over the years until he could not stand up to a stiff wind. And Marie Little Soldier? Her fate contains too much of the story for me to give away.

A story that is now only mine to tell. I may not be the only witness left—there might still be someone in that small Montana town who remembers those events as well as I, but no one knew all three of these people better.

And no one loved them more.

I
N 1948 my father was serving his second term as sheriff of Mercer County, Montana. We lived in Bentrock, the county seat and the only town of any size in the region. In 1948 its population was less than two thousand people.

Mercer County is in the far northeast corner of Montana, and Bentrock is barely inside the state’s borders. Canada is only twelve miles away (though the nearest border crossing is thirty miles to the west), and North Dakota ten miles. Then, as now, Mercer County was both farm and ranch country, but with only a few exceptions, neither farms nor ranches were large or prosperous. On the western edge of the county and extending into two other counties was the Fort Warren Indian Reservation, the rockiest, sandiest, least arable parcel of land in the region. In 1948 its roads were unpaved, and many of its shacks looked as though they would barely hold back a breeze. But all of northeastern Montana is hard country—the land is dry and sparse and the wind never stops blowing. The heat and thunderstorms in summer can be brutal, and the winters are legendary for the fierceness of their blizzards and the depths to which temperatures drop. (In one year we reached 106 degrees in July and 40 below in January.) For those of you who automatically think of Montana and snow-capped mountains in the same synapse, let me disabuse you. Mercer County is plains, flat as a tabletop on its western edge and riven with gullies, ravines, and low rocky hills to the east because of the work the Knife River has done over the centuries. The only trees that grow in that part of the country, aside from a few cottonwoods along the riverbank, have been planted by farmers and town dwellers. And they haven’t planted many. If the land had its way, nothing would grow taller than sagebrush and buffalo grass.