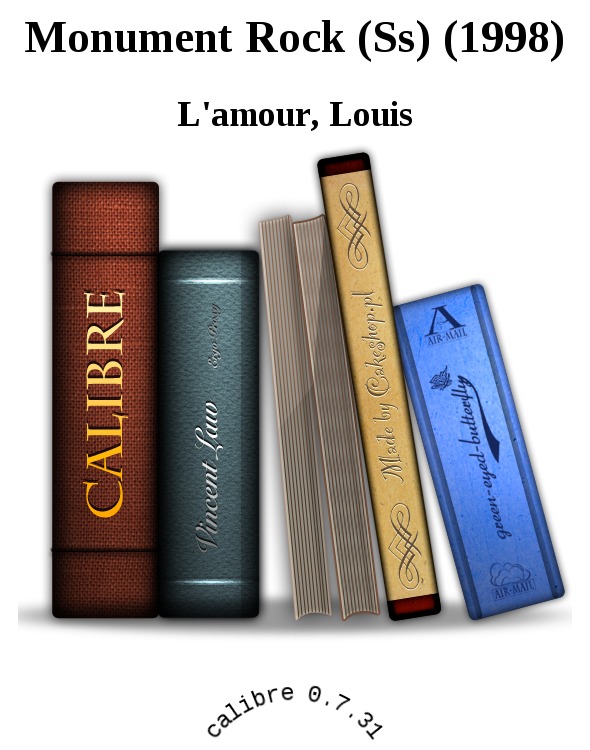 The Small Glow Of The Lamp Over The Hotel Register, Shaded As It
was, threw his cheekbone
s
into high relief and left his eyes hollows of darkness. The night clerk saw onl
y
a big man, in dusty range clothes, who signed his name in the slow, cramped manne
r
of a man unaccustomed to the pen. Hibbs handed him his key and the man turned an
d
started up the steps.

As he climbed, the light traveled down over his lean hips and picked out the dul
l
luster of walnut-stocked guns, then slid down to worn boots and California-styl
e
spurs. When the heels vanished, Hibbs waited no longer but turned the register an
d
peered at the name. Without another instant of delay he came from behind the counter
,
cast one quick glance up the stairs, and bustled out the door.

The quick, upward glance did not penetrate the darkness. Had it done so, he woul
d
have seen the stranger standing in the shadows at the head of the steps, watchin
g
him. When Hibbs hurried across the dark street, the ride
r
was at his window, looking down. The clerk disappeared into an alley.

It was a small thing, but the rider knew the wheels had begun to turn. Already the
y
knew of his presence, and already he had gathered his first fragment of a fact. Somebod
y
was almighty interested in his arrival, and that somebody had a working deal wit
h
the hotel clerk. Not much to know, but a beginning.

The clerk had hurried on for several hundred feet then turned and stopped by a windo
w
with three inches of opening. He tapped lightly with a coin, and at a cautious response
,
he whispered, "Hibbs, here. Gent just registered as Utah Elaine, El Paso."

Disappointed at the lack of reaction, Hibbs waited for something else to be said;
t
hen, when it did not come, he added, "He looks salty."

Hibbs walked slowly back to the hotel. His round, rather querulous face sagged wit
h
vague disappointment.

The man behind the darkened window rolled on his side and picked up a carefully prepare
d
cigarette that lay on the table by the bed. When it was lit he lay back, his hea
d
on the bunched-up pillow. Against the vague light of the window, the cigarette glowe
d
and he stared up into darkness.

How much longer dared he continue? The pickings were rich, but he was feeling th
e
uneasiness that preceded danger. He had a bag full, no doubt about that. Maybe i
t
was time to pull his stakes.

He knew nothing of Elaine, yet that the man had bee
n
asked here was evidence that someone believed he was the man for the job.

Jack Storey had been tough and fast ... a drunken miner named Peterson had been egge
d
into shooting him in the back. Three other marshals had preceded him and they wer
e
buried in a neat row on the hill. The man on the bed inhaled deeply and knew he ha
d
managed well up to now, but his luck was sure to run out.

He had the gold taken from miners, gamblers, and casual travelers and only Hibbs knew who he was, only he knew the murders and robberie
s
had been engineered by one man. And the clerk could be removed.

So he would quit at last. This was what he had
planned w
hen he first came west, to work at a quiet job and amass a fortune by robbery an
d
murder-then he would quit, go east, and live a quiet, ordered life from then on.

From the beginning he had known there was a limit. So far he was unsuspected. H
e
was liked by many. His whole plan had depended on the crimes seeming to be unrelate
d
so they would be considered casual crimes rather than a series planned and carrie
d
out by either one man or a gang.

Yet it would be foolish to continue. Three marshals ... it was too many. Not to
o
many lives, just too many chances. Too many risks of discovery. No matter how shrew
d
this new man might be, or how dumb, it was time to quit. He would not pull even on
e
more job. He was through. Putting out the stub of his cigarette, he turned over an
d
quietly went to sleep.

A solid-looking man in a black suit and boots was sitting on the creek bank whe
n
Utah Blaine rode up. The ne
w
marshal's sun-darkened face had a shy grin that livened his features. "Hi, Tom! Might
y
good to see you."

"Sure is!" The older man gripped his hand. "Long time since the old days on the
Nueces
."

Blaine started to build a smoke. "So, what're you gettin' me into?"

Tom Church dug at the sand with a stick. "I don't really know. Maybe I'm crazy i
n
the head. We've had fourteen murders this past year, an' it worries me some. Thi
s
here town was started by my dad, an' he set store by it. We've always had the usua
l
cowpuncher shoot-in's an' the like of that, but something's different. No other yea
r
since we started did we have more'n three or four."

He talked quietly and to the point while Blaine smoked. Nobody in town showed a
n
unusual prosperity. No toughs were hanging around town that couldn't be accounte
d
for. Nobody left town suddenly. Nobody hinted at secrets. The murdered man was alway
s
alone, although in two cases he had been left alone only a matter of minutes. Al
l
the murdered men had been carrying large sums of money.

A half-dozen men carrying smaller amounts had left town unhindered; only two of th
e
fourteen had made killings at gambling. Others had worked claims, sold herds of cattl
e
or horses. All fourteen had been killed silently, with knife, noose, or club. Whic
h
argued "a killer who wanted no attention. "This town means a lot to us. My boys ar
e
growin' up here, an' two of the men killed were good friends of mine. I think there'
s
a well-organized gang behind it."

"You think there's no connection?"

"Look at it. Nobody has flashed any money and nobody has talked while drunk. That'
s
unusual for a gang. You know there's always one wheel that won't mesh. I'll get t
o
work on it."

Tom Church got up and brushed off his pants. "All right, but be careful. We've los
t
three marshals in the last ten months."

It was to Utah Elaine's advantage that he did not make a big show of looking fo
r
information. He did not throw his weight around. He let people know that he though
t
the marshal's job was mighty easy if people would just let him be. And while he sa
t
around, he listened.

Hibbs at the hotel might be the key. Hibbs had rushed word of his coming to someone
,
and Blaine had seen the street he went into. For the first four days Utah Blain
e
strolled about, rode into the hills, talked little, and listened a lot. He hear
d
a good deal of gossip about conditions of the claims, who was making it and who wasn't.

There was talk about cattle and cattle prices. Most of this talk took place on th
e
worn bench outside the barbershop.

It was late on the fourth night that he received his first test as marshal.

Blaine was at a table in a back corner of the saloon when a wide-shouldered youn
g
man with red hair smashed through the swinging doors and glared around him. Obviously
,
he had been drinking, just as obviously, he was not so drunk that his speech wa
s
slurred or his reactions slow. "Where's that two-bit marshal?" he demanded.

The casual tone upset Red Williams, who was trouble-hunting. Nevertheless, he too
k
three quick steps toward Elaine, and Utah did not move. "You're the marshal? Well
,
I hear we got to check our guns! You figurin' to take mine away from me? If you do
,
get started!"

Elaine chuckled. "Red," he said conversationally, "don't you get enough trouble wrestlin'
s
teers? Why don't you fork your bronc and head on for home?"

Red Williams was disturbed. It was not going as expected. Instead of being a hard-eye
d
marshal who immediately started for him, this man talked like another cowhand. "Yo
u
tellin' me to get out of town?" he demanded.

"Just advisin'," Utah replied casually. "If you figure to do a day's work tomorrow
,
you better sleep it off." He pushed his hat back on his head. "I call to mind on
e
time when I rode for Shanghai Pierce. We was-"

"You rode for Shanghai?" Red's truculence was forgotten.

"Wow!" Red backed up, suddenly grinning. "Mister, if that's who you are, this tow
n
is off-limits for my kind of trouble!"

Squaw Creek was impressed but not convinced. Twice Elaine quietly talked his wa
y
out of trouble that with any other marshal would have meant shooting. Days passe
d
with no gunfights, no brawls, and surprisingly, no robberies and murders.

Once, sitting on the bench in front of the barbershop, he was asked about the killing
s
of Van Hewit and Ned Harris, the two last murders before he took the job of marshal.

He shrugged and replied, "I'll handle the crime that comes my way, but
I
say le
t
the dead past keep its dead."

Before the saloons opened, the benches in front of the barbershop were the usua
l
loafing place. It was there he stopped to gather what facts he could. "Nice idea,"
h
e commented. "Gives a man a place to sit and talk."

"Pickard's idea," they told him. "Built 'em for his customers to wait on."

Pickard was a man of medium height, smooth-faced but for a flowing mustache. Square-jawe
d
and square-bodied, he was a friendly man, skillful at his trade, and a
good listener. "Mighty fine barber," Tom Church said, "I'll"
b
e sorry when he goes."

"Brother died, back in Illinois. Got to go back and manage the property."

It was their second meeting since Elaine's arrival, and Church was visibly disturbed.

"The rest of the city council, the men who pay your salary, Utah, they're complaining.

You've kept it quiet, or it's been quiet, but you've found no killer. I promise
d
that you would."

"You don't catch a killer right away any more than you take a herd to Montana b
y
wishin' it there."

He knew more than he was telling Tom Church. Things were beginning to add up. All the killings had been within five miles of town. Al
l
but two had taken place at night or early in the morning. The two had occurred a
t
midday. Five men lived on that street into which Hibbs had gone on the night of hi
s
arrival. Childress, Hunt, Newcomb, Jones ... and Tom Church.