Read More Than You Know Online

More Than You Know 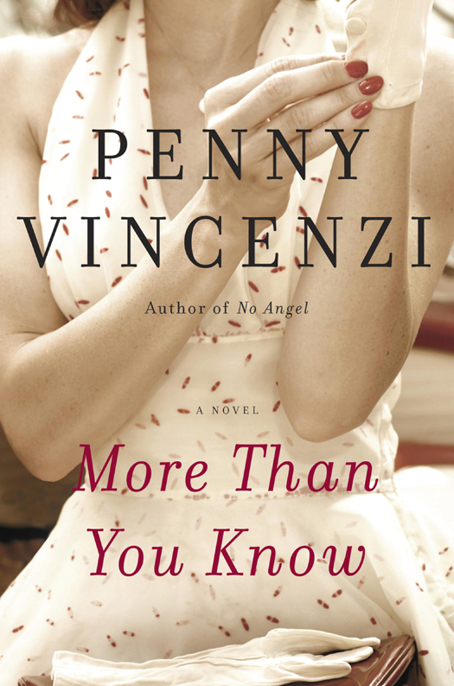 All rights reserved. Published in the United States by Doubleday, a division of Random House, Inc., New York.

Originally published in different form in Great Britain as
The Decision
by
Headline Review, an imprint of Headline Publishing Group, London, in 2011.

For Paul, who was always there
.
And for Polly, Sophie, Emily, and Claudia
,
for getting me through
.

Part One - The Engagement

ELIZA FULLERTON-CLARK, a debutante and subsequently a fashion editor

CHARLES FULLERTON-CLARK, her brother, a stockbroker

LOUISE MULLEN, secretary to Matt and subsequently a property tycoon in her own right

MADDY BROWN, a knitwear designer and friend of Eliza’s

ESMOND, her boyfriend and a hatter

JACK BECKHAM, editor of
Charisma
and later of the
Daily News

MARIELLA CRESPI, his wife and socialite

TIMOTHY FORDYCE, a friend of Mariella’s in Milan

HEATHER CONNELL, a young mother and friend to Eliza

DEMETRIOS AND LARISSA, tavern owners on the Greek island of Trisos

I
T WAS NEARLY OVER THEN
. B
Y THIS TIME TOMORROW IT WOULD BE SETTLED
. By this time tomorrow she would know. Whether she would still be a mother, a proper mother, the sort who did the ordinary things, got her child up every morning and tucked her up in bed every night, took her to school and picked her up again, knew when she’d had a tummyache or a bad dream, got cross with her, argued with her, decided when to get her hair cut or that she needed new shoes, told her off for skimping on her homework or her ballet practice, insisted she made her bed and tidied her room and wrote thank-you letters and cleaned out the hamster’s cage … Or the other sort, the once-a-week sort, the provider of a perfect room and whatever-you-fancy food, the purveyor of treats and outings, and ultragenerosity to friends, overindulgent, never cross, never critical, watchful for new loyalties, jealous of new traditions …

Which would she be?

E
LIZA WAS IN THE MIDDLE OF CURTSYING TO THE
Q
UEEN WHEN SHE
decided it was time she lost her virginity.

She was rather shocked at herself, not for the nature of the decision, but for managing to make it at such a moment, such a terribly important moment in her life; both her mother and her godmother (who was actually presenting her) had instilled into her endlessly how lucky she was, because this was positively the last year of court presentation; it had been declared an anachronism, not in keeping with the new Elizabethan age. And here she was, in her blue silk Belinda Belville cocktail dress, in the presence of the Queen—so much younger and prettier in the flesh than her photographs—and she was thinking not about being part of a deeply important tradition that had lasted for generations, but about with whom of all the young men she was dancing and flirting with that wonderful summer she might achieve this new ambition. It really was rather bad of her.

Concentrate, Eliza!
What would her mother and godmother say if they knew that after all their organising and lunching and juggling with dates and guest lists for her season, that her mind was fixed not on what to them was the almost sacred part of the whole thing, but on something very unsuitable indeed.

She straightened slowly and moved towards the side of the throne room, making way for the next wave of girls.

Eliza was attracting a lot of attention that summer. Indeed she had
become a bit of a favourite with the popular press, had so far appeared in the
Express
three times and the
Mirror
four. Her mother had felt it rather lowered the tone of Eliza’s season, but Eliza thought it was wonderful, and a lot of the other girls had been really jealous. She wasn’t pretty—her features were too large, and her coloring too strong, with slightly olive skin and very dark hair combined with very dark blue eyes, and she had more than once heard her mother saying worriedly to her grandmother that she did hope no one would think there was foreign blood in the family. But she also knew that she was extremely attractive.

Boys had made passes at her from when she had been only fifteen. Indeed, she had first made the pages of
Tatler
the year before her season, watching her brother, Charles, play cricket for the Old Etonians on Father’s Day.

But this year was truly hers, and she had already been granted the Big One, a full-page solo spot at the front of
Tatler
.

“Miss Eliza Fullerton-Clark,” the caption said, “daughter of Mr. and Mrs. Adrian Fullerton-Clark. Eliza, a charming girl whose interests include skiing and the history of art”—
I didn’t know that
, thought Eliza—“will have her dance at the exquisite Fullerton-Clark home, Summercourt, Wellesley, later in the season.”

The photograph had been granted its prominence by
Tatler
’s social editor, Betty Kenward, the redoubtable Jennifer of “Jennifer’s Diary,” whose word alone could promote a girl from being just, well, a girl, to a success, someone to be marked down as having a future. Which meant not a future in her own right, but as the wife of someone rich and powerful, at best heir to one of the great estates of rural England.

And Eliza’s future had been most carefully planned. Sarah Fullerton-Clark, together with her best friend (and Eliza’s godmother), the Honorable Mrs. Piers Marchant, had visited Mrs. Kenward in her eyrie at the top of a small flight of stairs from the
Tatler
editorial floor. Mrs. Kenward had given them the regulation small tomato juice and shared with them the almost mystical tools of her trade: her diary of the season, with every girl’s dance and date so far, and a list of eligible young men, rich and well connected, christened (by the tabloids) the “Debs’ Delights.” The Delights had a longer life span than the debs, and were summoned for several summers, at no cost to themselves, to attend dances and parties, Ascot and Henley, and whole weekends at fine country
houses, where the only requirement upon them was to wear the right clothes, not to drink too much, to be polite to their hostess, and to smile at and charm the prettier debs.

Charles was on the list, of course; he was very tall and dark, and charmingly diffident, a favourite with the mothers; Sarah and Anna Marchant had left Mrs. Kenward’s office with a recommendation for the date for Eliza’s dance and some starred names of young men on the list, denoting particularly impressive titles or fortunes.

Eliza was staying with the Marchants in London during the week that summer, since she was doing—as well as the season—a course at one of London’s smarter secretarial colleges. Eliza was determined to work, and not in some feeble little job either; she wanted a career. She knew what everyone including her mother said, that a job was just something to do until you got married and to earn you a bit of pocket money, but Eliza wanted more; she wanted a job that was interesting and absorbing, something she cared about “that will make me a person in my own right,” she said to Charles, “not just as someone’s wife or whatever.”

Fashion fascinated her particularly: not just clothes, but the way they worked, how you could tell so much about a person from what they wore, how important they were to the picture you presented to the world.

In spite of her decision, taken in such sumptuous circumstances, Eliza was still a virgin as the date for her dance approached. For one thing, she’d been terribly busy. She’d been to literally dozens of dances and cocktail parties; she’d had a starring role in the Berkeley Dress Show, that great annual opportunity for debs to be models for a day, and managed to catch the eye of the photographer from the
Evening Standard
and hit the front page, wearing a white evening dress by Hartnell. And at Queen Charlotte’s Ball—the Harlots’ Ball, as the Debs’ Delights called it—she had been quite near the front in the line of girls pulling the giant cake into the ballroom: yet another photograph in the tabloids.

Rift by Andrea Cremer
Dark Angel by Maguire, Eden
Swim to Me by Betsy Carter
John Belushi Is Dead by Kathy Charles
La sombra by John Katzenbach
His Truth Your Nightmare by Mesha Mesh
Carrot and Coriander by Ashe Barker
First Came the Owl by Judith Benét Richardson
No Escape by Hilary Norman
Molly Dox - Annie Addison 01 - Color Me Crazy by Molly Dox
Our partner