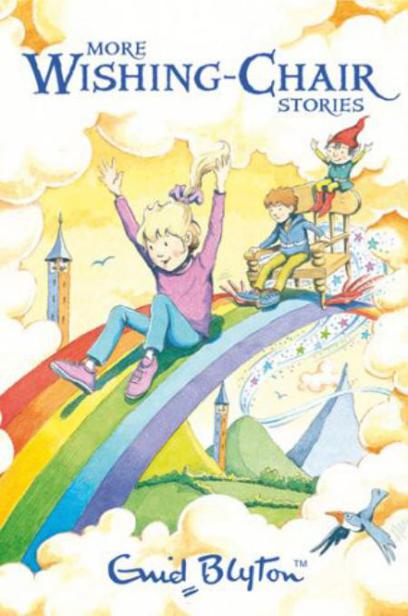 THE ADVENTURE OF THE GREEN ENCHANTER

THE CHAIR RUNS AWAY AGAIN

THE LAST ADVENTURE OF ALL

SANTA CLAUS AND THE WISHING-CHAIR

THE END OF THE ADVENTURE

ONE afternoon Mollie and Peter were talking to Chinky the pixie in their playroom. Mollie was sitting in the magic chair, knitting as she talked. She was making a warm scarf for Chinky, who often used to go out at night and talk to the fairies in the garden. It was still very cold, and Mollie was afraid he would get a chill.

Peter and Chinky were not looking at Mollie at all—and then a dreadful thing happened! The chair grew its red wings all of a sudden, spread them out, and flew straight out of the open door! Yes—with Mollie in it, all alone! Peter and Chinky gave a shout of dismay, and rushed after it. They were too late—the chair rose over the trees, and the last they saw of Mollie was her pale anxious face looking over the arm at them.

“We can't do anything,” said Chinky. “We must just hope that the chair comes back safely, that's all.”

Mollie had the surprise of her life when the chair rose up so suddenly. She wondered where in the world it would take her to. It flew a long way, and when it came down Mollie saw that a very thick dark wood lay beneath her.

The chair squeezed its way through the trees, and Mollie crouched down in the chair, for the branches scratched against her face. At last she was on firm ground again, and she jumped off the chair to see where she was. She saw, not far off, a beautiful little cottage, and to her surprise, there were pink and red roses out all around it—which was very astonishing, for it was only the month of February.

“Perhaps a fairy lives there,” thought Mollie, and she went up to the cottage. The door was shut, but there was a light in the window. Mollie thought she had better peep into the cottage and just see who lived there before she knocked at the door. So she did—and inside she saw an old witch, standing before a curious fire whose flames were bright purple, stirring something in a big green pot.

Suddenly the witch looked up—and she saw Mollie peeping in. In a trice, she threw down the ladle she was using and ran to the door.

“What are you spying on me for?” she shouted, in such a rage that her face went red as a sunset. “Come here! Let me see who you are! If you are a spy, I'll soon deal with you!”

“But I'm not!” said poor Mollie. She thought she had better run away, so she turned—but the witch caught hold of the sleeve of her frock.

“You go indoors,” she said, and pushed Mollie into the cottage. She slammed the door and went back to her green pot, which was now singing a curious tune to itself, and puffing out pale yellow steam.

“Go and help the cat to make my bed,” ordered the witch. “I won't have you peeping round whilst I make this spell!”

Mollie looked round for the cat. There was one in the corner, busily washing up some dishes in the sink. It was a black cat, but its eyes were as blue as forget-me-nots. How strange!

The cat put down the tea-cloth and ran into the next room. There was a bed there, and the two set to work to make it. As they were in the middle of it, the witch called sharply to the cat:

“Puss! Come here a minute! I need your help.”

The cat at once ran to her—and Mollie took the chance to look round. She saw that the bedroom window was open. Good! It wouldn't take her long to slip out of it and run back to her chair!

She climbed out—but in doing so she knocked over a big vase on the window-sill. Crash! The witch at once guessed what was happening. She rushed into the bedroom, and tried to get hold of Mollie's leg—but she was too late! Mollie was running between the trees!

“Cat! Chase her! Scratch her! Bring her back at once!” yelled the witch.

The blue-eyed cat at once leapt out of the window and rushed after Mollie. How they ran! Mollie reached the wishing-chair, jumped into it, and cried, “Home, quickly!”

It rose up—but the cat gave an enormous leap and jumped on to one arm of the chair. Mollie tried to push it off, but it dug its claws into the arm, and wouldn't leave go.

“You horrid creature!” said the little girl, almost in tears. “Get off my chair!”

But the cat wouldn't move. The chair rose higher and higher. Mollie wondered what she should do if the cat flew at her—but it didn't. It crawled down into the chair, hid behind a cushion there, and seemed to go to sleep!

After a while Mollie saw that she was near her own garden. She was glad. The chair went down to the playroom, and Peter and Chinky rushed out excitedly. Peter hugged Mollie, and so did Chinky. They had been so worried about her.

Mollie told them her adventure. “And the funny thing is,” she said, “the witch's cat is still in the chair! He didn't scratch me—he hid behind the cushion!”

Chinky ran to the chair and lifted up the cushion—yes, there was the cat! It opened its great blue eyes and looked at Chinky.

The pixie stared hard at it. Then he ran his hands over the cat's sleek back, and shouted in surprise.

“Come here, children, and feel! This isn't a proper witch's cat! Can you feel these bumps on its back?”

Sure enough, Peter and Mollie could quite well feel two little bumps there.

“This cat was a fairy once,” said Chinky, in excitement. “You can always tell by feeling along the back. If there are two bumps there, you know that that was where the wings of the fairy grew, once upon a time. I say! I wonder who this fairy was!”

“Can't we change the cat back into its right shape?” asked Peter, in great excitement.

“I'll try!” said clever Chinky. He drew a chalk circle on the floor, and then put a chalk square outside that. He stood between the circle and the square, and put the cat in the middle. Then he told the children to pour water on the cat whilst he recited some magic words.

Peter got a jug of water, and Mollie got a vase. Both children poured water on the silent cat, whilst Chinky chanted a string of strange words.

And then a most peculiar thing happened! The cat grew larger—and larger. The bumps on its back broke out into a pair of bright blue wings. The cat stood upright on its hind legs—and suddenly the whole of the black fur peeled away and fell off—and inside was the most beautiful fairy that the children had ever imagined!

He had the brightest blue eyes, and shining golden hair, and he smiled in delight at Chinky.

“Thank you!” he said. “I am Prince Merry, brother to the Princess Sylfai. The witch caught me and changed me into a cat at the same time as she caught my lovely sister. She sold her to the Green Enchanter, and she is still a prisoner.”

“Oh, your highness!” cried Chinky, bowing low before the beautiful prince. “It is such an honour to have returned you to your right shape. What a good thing Mollie flew to the witch's house!”

“It certainly was!” said Prince Merry. “I suddenly saw she had a wishing-chair out in the wood, though, of course, the witch didn't know that! I was determined to come with her in the magic chair—but I only just managed it! It is the first time I have had a chance to escape from the witch!”

“I wish we could rescue your sister, the Princess!” cried Peter.

“That would be splendid!” said the Prince. “If we only could! But before we can get to the hill on which the Green Enchanter lives, we have to get a map to find it—and there is only one map in the world that shows the Enchanter's Hill.”

“Who has it?” asked Chinky excitedly.

“The Dear-Me Goblin has it,” said Merry. “He lives in the caves of the Golden Hill.”

“Then we'll go there the very next time the chair grows wings!” shouted Chinky, Mollie, and Peter.

PRINCE MERRY lived with Chinky in the playroom, waiting for the chair to grow its wings again. Chinky made himself Merry's servant, and did everything for him gladly and proudly. Peter and Mollie thought they were very lucky children—to have a wishing-chair of their own, a pixie for a friend, and a fairy prince living in their playroom. Nobody would believe it if they told the story of their adventures.

It was a whole week before the chair grew its red wings. It was one evening after tea, when Peter, Mollie, Chinky, and the Prince were sitting round the playroom fire, having a game of snap. All four had cards in front of them, when suddenly a draught blew the whole lot together!

“I say! Is the window open?” cried Peter, jumping up. But it wasn't. He couldn't think where the draught came from when he suddenly saw that it was the chair, flapping its red wings again! Of course! They made the wind that blew the cards together!

“Look!” cried Peter excitedly. “The chair's ready again! Come on! Is there room for us all?”

“No,” said Chinky, “but the Prince has wings. So he can fly beside us. Come on—get in! I say, though—hadn't we better take a rug? It's an awfully cold night.”

The children pulled a rug from the sofa, and then they and the pixie climbed in the chair, wrapping the rug closely round them. The prince opened the door, and the chair flew out at once. Merry followed it, and held on to one of the arms as he flew, so that he should not miss the way.

Back on Blossom Street by Debbie Macomber
Acts of Love by Roberta Latow
A Guardian Angel by Williams, Phoenix
Cash (The Henchmen MC Book 2) by Jessica Gadziala
The Black Tower by Louis Bayard
The Hanged Man by P. N. Elrod
The Emerald Storm by Michael J. Sullivan
Wonderland Creek by Lynn Austin
Green Hell by Bruen, Ken
The Last Goodbye by Caroline Finnerty
Our partner