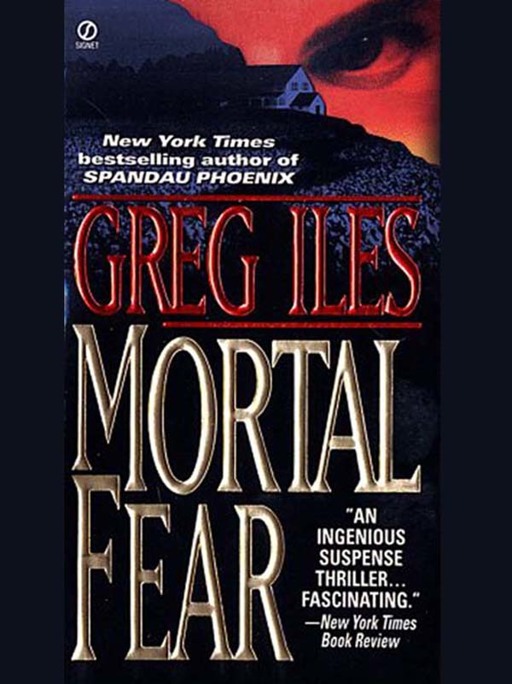 A
Signet
Book / published by arrangement with the author

SIGNET
and the “
S
” design are trademarks belonging to Penguin Putnam Inc.

For my wife, Dr. Carrie McGee Iles, The light at both ends of the tunnel
.

As always, to Natasha Kern, my literary agent.

To Ed Stackler, a young editor of the old school, one of the last in a business that doesnt have time for it anymore.

Many thanks to Elaine Koster for wise guidance.

Special thanks to Stephen King.

To Michaela Hamilton for pinch-hitting, Peter Schneider for creative thinking, Hank Doliner on general principles, and the team at Dutton/Signet for their expertise and commitment.

Special thanks to Oriana Green, for contributions too numerous to list here, thank God.

Special thanks to Robert and Frances Royal.

I owe a great debt to Lou Jacobs, D.O., for generously sharing his insights and experience in neurological surgery.

Thanks to the members of CompuServe and America Online, who helped in myriad ways, especially Pat Reinken and Emery Werberg.

As always, thanks to Madeline for patience, and to her grandmothers for keeping her off my lap long enough to get it done.

All mistakes are mine.

Flat, low, dispersed. A single grouping of tall buildings in the distance.

The taxi driver was a Cajun, surprisingly. A thin brown wrinkled man. Rather like getting a Chinese cabbie in Chinatown. I expected an Eastern European, as I see everywhere else.

He kept glancing into the rearview mirror as we passed through a town he called Metrya place where the whites once fled to escape da niggas. Now they flee across Lake Pontchartrain. I worked at the computer in my lap but kept an ear open to his words.

Night descended over a rising moon as we swept onto an elevated section of freeway and passed the Superdome. Kali must have been a black shadow to him, beside me in the backseat, a shadow with bright black eyes.

She wanted to kill the driver.

I could feel it.

In her handbag, the scarfsacred weapon. I see an image in her mind: he stops at a traffic light as we descend the ramp to the lower world of surface streets. She slips the noose around his throat and silently steals his life....

I lay a hand lightly on her wrist and feel a twitch that verifies my sense. She is ready.

I know that if I slide my hand beneath her sari I will find her moist. She lives for these nights.

I hope the security is no tighter than I expect.

I slide my hand beneath her sari.

She is wet. Burning.

So opposite we are, so perfectly opposite. I understand restraint. Control. The defiance of it.

Kali understands only being.

She lets her head loll back on the car seat, black eyes glittering beneath half-closed lids. I move my hand as we descend the ramp onto Poydras, possibly saving the drivers life.

We move toward Canal and the French Quarter.

The driver smells her. Pungent, fierce. I see alertness in the back of his neck, the angle of his head. His eyes dart to the rearview mirror. A whore? he wonders.

Kali smiles at him in the mirror. There is death in her smile. Death that a man might walk willingly into. She is startlingly beautiful. And so she should be.

You paid her father good money for her.

We exited the taxi at Galatoires, entered the restaurant, then left and changed cabs twice again. Tiresome but effective.

Security was heavy at the mansion, but no worse than I had expected. A small army, as befits an American cult figure. Bodyguards hired from God-knows-what agencyprobably some outfit run by an ex-policeman who swilled Jax on the job for twenty years.

The ironwork of the fence was exquisite. The French influence. I let my right hand graze the points as we moved along it. They would bruise me,
I knew, but I felt fit. Almost reckless. The grillwork matched that on the second-story balconies.

The street was crowded with all manner of tourists. Gawkers, most of them. I inclined my head as we passed the gate guards. One nodded slightly, glanced at my briefcase. The other followed Kali with his eyes. Even the billowing sari could not hide the hard contours of her body.

After we turn the corner? she asked.

If the crowd thins.

When we turned the corner, the crowd melted away as though scattered by a stage manager. Kali bunched up her sari and was over the ironwork in seconds, into the palm fronds and banana trees. I was more careful. I passed the briefcase through the bars, then worked my way over.

We stood together in the dripping trees, looking at the floodlit face of the mansion. Solid stonework, like an outbuilding of Versailles. Kalis hand dropped to my distended zipper. She lightly squeezed me, a nurse checking a pulse.

I shivered. We must wait.

A short intake of breath. How long?

I crouched in the tenebrous foliage, booted up the computer, and logged back onto EROS. Shes still at her computer. Shes searching for me.

Then let her find you.

I shut off the computer and put it back into the case. The rightmost upper window, I said, recalling the photocopied blueprints that the archives so dutifully sent me. Now.

Crossing the open ground between fence and mansion was daunting for me. For Kali nothing. She believes we are invisible in such moments. Less than shadows. We are our intent.

I opened my briefcase beneath the side balcony.
Kali took out the rope and hurled the rubberized hook over the ironwork of the balcony rail. She climbs like a thief.

I tossed up the briefcase.

A rape kit, police would call it.

But it is so much more.

I came prepared for resistance, but the French doors on the balcony were open. So often it happens that way. Evil is an invited guest.

Kali pulled the rope up after us.

We moved up the hallway together. Thick carpeting. Conditioned air whispering out of the ceiling. Somewhere the regular groan of a ceiling fan slowly turning.

I followed the groan.

It led us to the master bedroom. Kali took up her post beside the door. I see it again and again, fate unraveling into chaos:

I open the door as softly as possible.

The patient is seated before her computer, her back to me. She wears a long, flowing garment, like something from one of her early novels. You should tape a penny to one of the blades to stop that noise, I want to say. But I dont. Instead I say:

I have come, Karin.

The chair tips onto the carpet as she bounds out of it in voiceless terror. Her eyes mostly white behind her glasses. She is heavier than her publicity pictures. The eyes dart to my exposed hand, searching for a knife or a gun. But it is empty.

How did you get in? she whispers.

I do not dignify this.

Her eyes widen beyond the point I believe possible. But I was just She looks back at her computer. How... ?

It is not important. I have come for you at last. To give you what you most desire.

She stares, her brain obviously thrumming behind the glassy eyes. How Do you have a car for us? she asks finally.

I thought you might call for one of yours.

Yes, she says much too quickly. If youll just let me get some things

She freezes near her bedside table. Her eyes dart downward, then back to my face. It is breaking down. Kali was right: fantasy and reality are alternate universes. I come to save, but who can grasp great purpose with vision clouded by terror? My hopes crash around me like shattered icons. I slip my right hand behind my back and grip the butt of the pistol.

Then her mask cracks, revealing her panic as she stabs a hand at the bedside table. I see a button there. An alarm.

I have no choice but to fire.

The feathers of the dart bloom in the midline, just above where her navel must be. The patient looks down with animal incomprehension and pulls out the dart, but it is much too late for that. Then she runs. The brave ones usually do.

She runs right at me. Not actually at me, but toward me, because I stand between her and the door.

I let her run past me.

The patient turns to me for some explanation. How powerfully her heart must be beating!

Kali, I say, regretting every moment.

The patient starts at the sound of Kali closing the door, watches the young woman move lithely across the floor with my briefcase, like a dark angel.

Kali sets the case on the floor, then stands and unfastens her sari. It falls to the carpet, leaving her utterly naked. I watch the patient trying to work out what is happening as the Ketamine cocktail courses through her system. Why is the Indian woman undressing? Just before she loses consciousness, she might work it out. That Kali is undressing to keep her clothes free of blood.

I must disrobe as well, but first I walk to the computer, log off, type a few commands, and shut off the machine. Then I return to the patient, kneel, and open my briefcase.

Whats in there? she asks dully, sitting down on the floor.

My instruments. I lift a stainless steel rongeur from the case and try to smile, but my heart is a black hole.

The patient has done enough research for her novels to recognize the rongeur. In blind panic she breaks once more for the door, scrambling on all fours like an infant, but Kali channels her flat onto her stomach. I watch silently until I see the dagger flash and press against the patients throat.

Dont dare, I say, alarmed by the blood lust in her eyes. Command rises into my throat. Strip her.

We took our time with the patient. We could afford to, as Karin allowed no guards inside the mansion. But our options were limited. How I longed
to spend myself within that still body. But of course it was impossible.

This time I forced Kali to be careful to get no blood on her feet. After she finished and I had collected my specimen, we retired to the shower. Genuine marble. We wear rubber caps to keep as many hairs as possible out of the drain trap. The blood slipped off our shaved skin and swirled on the white stone. At last I could allow myself release.

Self-control is so important.

Kali knelt before me in the hot spray. I had held back so long that neither her expertise nor her diligence were required. She swallowed every drop of evidence, as she must. She may have left traces of her own arousal, but what will the police make of that? They will be confused enough as it is.

As we stole out of the estate, carrying not only the briefcase but also the rubber bag, now filled, I recalled the patient. So much potential there. For my work. For public relations. All lost, and for what? More homogenate? But I must not dwell on failure. Great souls rejoice in adversity.

Tomorrow is another day.