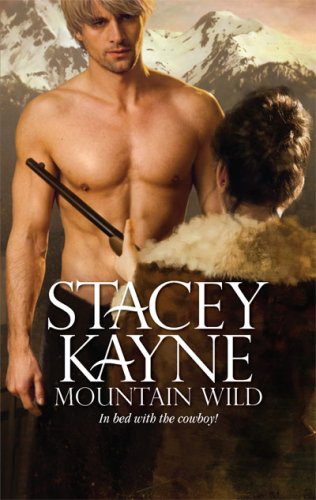 “Don’t go,” he whispered against her ear, the vibrations rekindling the wild tingles in all the places he’d touched. He leaned in, touching his lips to hers in the lightest caress. His arm tightened over her ribs.

She shoved his arm away and scrambled for the end of the bed. She stumbled over the trunk and fell to the cold floor. She sprang up, tugging her wool nightshirt closed as she bumped against her table, wobbling the lit oil lamp. Light shifted over shadows and the naked man sprawled in her bed.

She inched toward the stove, grabbed up her now dry clothes then backed toward the door. How long had she slept?

The heated swirls he’d conjured rose up, stealing her breath.

He’d
kissed
her, in ways she’d never imagined a man would kiss a woman. Her teeth clamped down on her trembling lower lip. The memory of his mouth on her breast, his tongue moving against hers, added to the violent stir of her pulse. His touch had been tender, his kisses…overwhelming.

“This book [is] such a delight. Witty conversations, non-stop action and romance at its best—
The Gunslinger’s Untamed Bride
has it all.”

“This second installment in Kayne’s
Bride
series is fast-paced and laced with humor, action and sexual tension. The characters are well developed and the plot suspenseful as it rushes headlong to an exciting conclusion.”

“Excitement, mystery and delight fill the pages of
Maverick Wild,
Stacey Kayne’s latest historical treasure. Kayne can weave a story that will capture you and not let go. She has demonstrated herself to be a talented force in the world of western romance.”

“Kayne carries off a warmhearted Americana western with…feisty characters, a loving family atmosphere, small-town troubles and the gritty reality of life in the Wild West.”

“Courted by the Cowboy”

Dowdy cousin Elinor’s family connections are extremely useful, but Theo Ravenhurst is convinced her drab exterior disguises a passionate nature. He’ll give Elinor the adventure she’s been yearning for—and in the process discover she has talents beyond his wildest imagination!

A gentleman by day, Anthony de Portnay Smythe steals secrets for the government by night. When Constance Townley finds a man in her bedroom, her first instinct is to call for help. But the stranger gracefully takes his leave—with a kiss for good measure! Constance knows it won’t be the last she sees of this intriguing rogue….

Giles Fitzhenry is a born warrior. Lady Fayth is a Saxon heiress, forced to marry this Breton conqueror. Though she yearns to be rid of him, a deep desire ignites each time she holds her new husband’s piercing gaze. Giles has conquered all: title, lands and respect. But the ultimate battle is for his new lady’s love—and her utter surrender.

Dedicated to my critique partners, Sheila Raye,
who’s always there for emergency brainstorming,
Marlene Urso, for her speed-of-light proofreading, and
Carla Capshaw, whose insight is always an inspiration!

Tanner and Ethan for always being there
to help their mom out.

My mom and mom-in-law for their never-ending support.

My pals at Writers At Play.

Lucy, my fabulous editor, for her faith and
understanding.

My readers—I hope you enjoy this final addition
to my WILD series!

He was too close. Desperate to escape her brother’s rage, Maggie’s fingers dug into the dirt as she struggled through the thick brush. Thorns scraped across her cheeks, snagging her braids, ripping at her dress.

“Thirteen is a bit too old for hide-and-seek,” Nathan called out, his taunting voice sounding merely a foot away.

Maggie froze. She tried to control her jagged breaths and the tears burning for release. Her face and belly throbbed from his heavy fists crashing down on her. Their daddy hadn’t been dead a full hour, and her brother had lost his mind. He’d exploded from the house in a rage, their father’s will in his hand.

A twig snapped behind her. Maggie held her breath as his shadow moved over the dense scrub, blocking out bits of sunlight breaking through the twisted branches as he walked past. The crunch of his footsteps faded deeper into the woods.
Her heart thundered as she waited. She had to make it back to the ranch before him.

She scrambled from the bush, biting back a scream as thorns ripped at her skin. Shaking, she hurried back down the hillside. Through a maze of tall timber she could see her home below and those who’d gathered in the yard—stable hands, housekeepers, the nanny who’d raised her.

Why didn’t they come for her? She had screamed for help. All of them had looked on with horrified expressions, shrinking away as Nathan struck her again and again, forcing her to run for the woods to get away from him.

Maggie swung around. Fear gripped her chest, stealing her breath as her older brother towered over her. A wedge of black hair covered one eye. The other sparked with anger. Their father’s will was still crushed in his grasp, her blood marring the pages.

Until today, no one had ever struck her. At twenty-two, Nathan was now her legal guardian.

“Look at you, Margaret Grace.” He shook his head as though he weren’t the one responsible for her tattered state. “What would your daddy think of his precious little girl crawling through the dirt in her fancy pink clothes?”

A smile curved his lips, and tears blurred Maggie’s vision. He’d never liked her, but she never guessed her brother harbored such hatred. “What have I ever done to you?” she cried.

“You were born. My life was perfect before you came along. You killed my mother and have been nothing but a drain on my inheritance. And now I’m supposed to waste what’s left of
my
money on some finishing school and a dowry so you can be pawned off on some aristocratic fool?”

“It’s in the will!” he shouted, waving the crumpled pages. “His lawyer has a copy. I’m his only son, the rightful heir!
All this talks about is preparations made for
you, Margaret Grace!
” He swung his fist.

Pain exploded through her cheek. A scream ripped from her lungs as she hit the ground. She curled up, defending herself as best she could.

When the next blow didn’t come, she opened her eyes and saw a pair of Indian boots just inches from her nose. Her gaze traveled up a giant wearing a thick fur coat. A full beard covered most of his face, but didn’t hide three long scars twisting through his cheek.

Maggie gasped and scrambled back until she bumped into something. Fingers twisting into her hair, popping strands at the root, reminding her she faced a greater threat—her own brother.

“Who are you?” Nathan demanded.

The beastly man stared at her a moment before he glanced at her brother. “Trapper.”

“You’re trespassing on my property.”

The trapper looked directly at her. Maggie shivered, his vacant brown eyes increasing her fear. She was scraped, bruised and bloody, one of her braids had unraveled, yet he stared as though her brother held a dog by a leash.

“You want her?” Nathan asked, laughter in his voice.

The trapper’s shoulder shifted and a bound clump of fur landed on the ground beside her. “Give you six beaver pelts. Fair trade.”

Maggie gasped in horror. She couldn’t be sold!
“Nathan.”
She tried to stand, shaking her head despite the pain in her scalp. Her brother wrenched his hold. Pain pierced her scalp, forcing her back onto her knees with a sharp cry.

“You live around here?” he asked.

“No,” the trapper answered, his gaze fixed on her. “I follow the rivers.”

He released her hair. Pain exploded across her back as he kicked her into the dirt. “Take her.”

Long, grimy fingers reached for her. Maggie screamed as she was hoisted up and tossed over the giant’s shoulder.

She kicked and screamed as the trapper carried her deeper into the woods. Her thrashing didn’t slow his strides. He broke from the trees and ran across a wide clearing. Reaching the other side, he stopped and swung her forward, pinning her against the rough bark of a tree.

Fear choked her. Her breaths came in short gasps.

“Hush your mouth, lest you want to die,” he said in a harsh whisper.

She stared at the jagged scars rippling across his cheek and into his thick beard.

“I seen lots of death, little miss. That man has killin’ in his eyes.”

He lowered her to the ground and steadied her. “You want to live?”

Tears burned hot against her cheeks as she nodded.

“Then you bes’ move fast and keep quiet. He may not be finished with us yet.”

Her mind reeled as he tucked her against his side, his gaze scanning the ground he’d just covered.

He was afraid. Afraid her brother would come after them.

“Goddamn cowards on that ranch,” he murmured. “Even wolves defend their young. Goes to show why I don’t trust my back to no one.”

Maggie gazed up at his tawny, withered face and the matted brown hair poking out from beneath his battered hat. He smelled bad and was old, but not so old that his hair had grayed like her daddy’s.

“I done my good deeds in this life,” he muttered, taking a
step back. Fisted hands twice the size of her brother’s slammed onto his hips. His angry dark eyes narrowed.

Maggie stumbled back, beyond his reach.

“I got a mule a half mile from here. We’re headed north. You can go my way or find your own way. It ain’t my worry.”

Find her own way? “I—I’m only thirteen.”

“Only two ages in this world that matter. Either you old enough to survive or you ain’t.” He held his hand out to her.

Maggie stared at his large, filthy palm then glanced at her own scraped hands. Twigs and leaves clung to dirty pink satin and the frazzled black hair draped over her shoulders. She was suddenly aware of the ache in her swollen lips, the burning in her eyes.

Her daddy was dead. Her brother had tried to kill her.

Only Nathan called her by her first and middle name.

“My name is Maggie,” she said, taking the trapper’s hand.

Low murmurs carried across the meadow, drawing his gaze. Ira’s fingers tightened over hers, tugging her after him.