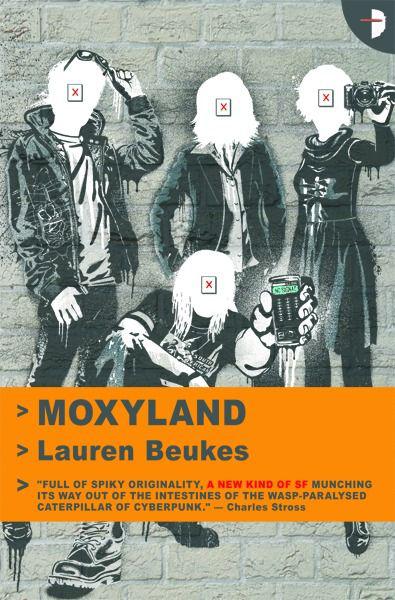 MOXYLAND
'
Moxyland
does lots of things, masterfully, that lots of sf never even guesses that it *could* be doing. Very, very good.'
- William Gibson
'A Technicolor jazzy rollercoaster ride into a dazzling hell.'
- André Brink
'A rare treat. Reminiscent at times of Neal Stephenson's
Snow Crash
,
Moxyland
is funny, gritty, imaginative and, ultimately, deeply disturbing. A politically charged urban speculative thriller that will leave you wanting more.'
- Obrigado
'
Moxyland
makes a refreshing and thought-provoking debut. It shares the jazzy language associated with early masters like Gibson and Sterling, but the technology in her world is necessary for survival, sometimes a point of pride, and often dangerous.'
- Strange Horizons
'Moxyland is bewilderingly fast-paced, slick; a nextgeneration cyberpunk that gets the heart pounding. I can't wait to read the next one... definitely a must-read.'
- Hub

'Lean, sharp, and tightly written, Moxyland keeps raising the stakes, from the opening chapter to the uncompromising finale. And with its electronic panopticon, it gives us a dystopia to rival
1984
or
Stand On Zanzibar
– a future horrifying for its very plausibility.'

'A brilliant debut that paints a harsh but strangely realistic portrait of tomorrow with a grace rarely seen in comparable works. Make no mistake:
Moxyland
is a work of art.'
- Stomping on Yeti
'
Beukes has taken a hundred interesting ideas, about the politics of oppression and subversion, the pervasiveness of technology, the conflation of virtual and actual identities, and created a plausible future.'
- Bureau 42
'
Moxyland
is a highly charged, imaginative and emphatic story that manages to both impress and disturb at the same time.'
- Science Fiction & Fantasy
'A superlative narrative blending GMOs, ICT, drugs, nanotech, bio-weapons while remaining ultra-hip and humane. The dazzling denouement was credible. I can't wait to read what Lauren Beukes comes up with next.'
- Slowhub

'M
oxyland
is what you get when you take your classic 80s deracinated corporate alienation sensibility, detonate about six kilos of Semtex under it, and scatter the smoking wreckage across 21st century South Africa – full of unselfconscious spiky originality, the larval form of a new kind of SF munching its way out of the intestines of the wasp-paralysed caterpillar of cyberpunk.'
- Charles Stross

A member of the Osprey Group
Lace Market House,
54-56 High Pavement,
Nottingham
NG1 1HW, UK
www.angryrobotbooks.com
Your government lies
Originally published in South Africa by Jacana Media (Pty) Ltd 2008
Copyright © 2008 by Lauren Beukes
Cover art by Joey HiFi
All rights reserved.
Angry Robot is a registered trademark and the Angry Robot icon a
trademark of Angry Robot Ltd.
This is a work of fiction. Names, characters, places, and incidents are
the products of the author's imagination or are used fictitiously. Any
resemblance to actual events, locales, organizations or persons, living
or dead, is entirely coincidental.
ISBN 978-0-85766-005-3

Out of the Night by Dan Latus
Treats Aren't Always Sweet by Harley McRide
White Pine by Caroline Akervik
The People Factor: How Building Great Relationships and Ending Bad Ones Unlocks Your God-Given Purpose by Moody, Van
Resorting to Murder (A Darcy Sweet Mystery Book 11) by K.J. Emrick
A Question of Despair by Maureen Carter
The Orpheus Deception by Stone, David
Blood Is a Stranger by Roland Perry
The Eclipse of Power by J.L. Hendricks
Taft by Ann Patchett
Our partner