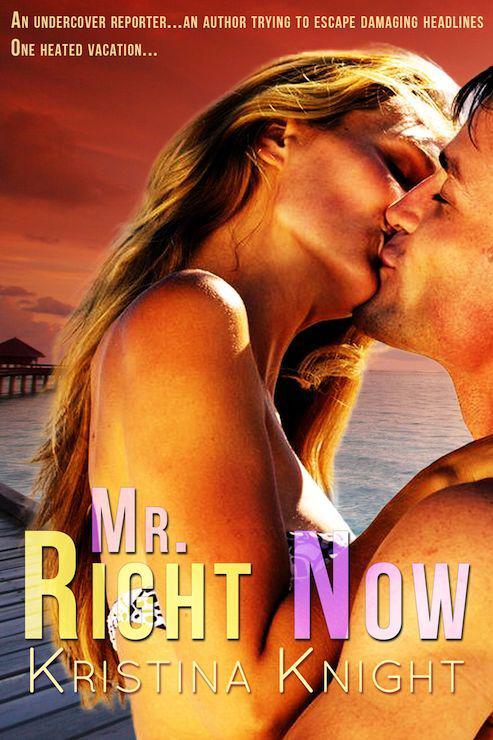 The wrong guy might be just right for her.

When her celebrity boyfriend of three years dumps her and claims he’s now gay, unlucky-in-love author Casey Cash decides to get out of New York. A cruise seems like the perfect escape: everyone onboard will be locked away from television, newspapers and internet gossip pages, allowing her some much needed relaxation. There's only one problem: her oh-so-helpful agent has hired a male escort for her…and a big NYC paper has sent a pesky reporter on-board, vowing to get the dirt.

Mason Drury doesn't want to write an expose on Casey, but he's in a bind. After a source flipped on him, he's persona non grata at his newspaper. Celebrity trash or not, this story will put him back on top. Too bad he finds himself breaking the first rule of reporting by getting attached to his subject and letting bias influence his story.

Casey’s much more interested in sexy Mason than the annoying escort who’s bunking in her room. Mason might even have romantic potential if she can shake her well-meaning—but nosey—fans. Oh, and that reporter. She’s got to avoid him at all costs…

CONTENT WARNING: A smattering of sass, sex and a heaping happily ever after.

“I’d like to make you look like that some early morning out at sea.” The sultry words slipped into Casey’s consciousness. She spun around. A man straight from the pages of one of her favorite romance novels stood a few feet to her right.

“I beg your pardon?” She sounded prissy. Prissy and breathless. What a combination.
Yes, I’m a stuck-up asthmatic looking for love. Would you like to be my escort?

The stranger smiled as he pushed a lock of hair behind her ear. Her skin sizzled at his touch. Had to be the Florida heat. Never in her twenty-six years had Casey felt that wonderful burn from a stranger’s simple touch. All her anger at Jane, at the crazy situation, fled.

“I said I’d like to make you look like that. Wide-eyed. Breathless. Satisfied.” He smiled around the words, as if he could taste that satisfaction. A flock of seagulls took flight in her belly.

He leaned forward and whispered in her ear. “On second thought, I like this look much better. Like release is just around the corner.”

Thank you for purchasing this Lyrical Press book.

For anyone who has ever gone on vacation with the intention of totally vacating their life at home. Salut!

To the people of the Caribbean, thank you for your warmth, graciousness and hospitality.

For the other pre-school moms ~ thanks for reminding me that we all need a vacation. Sometimes without the kiddos in tow.

Big, smoochey kisses and hugs to RadioMan and bebe, without whom I would never have known my own happily ever after.

For D'Ann, Liz, Shawn and Margie who have loved these characters (nearly) as long as I have…and kicked my butt to get this story right.

Cassandra Cash read the headline staring at her from the newspaper machine and groaned. So the story was out. Crap. And she wasn’t even on board ship yet.

She was Miss Romance. Queen of fixing a love life in three hundred pages or less. Her first four books had skyrocketed to the top of the bestseller list, unheard of for a relative newbie, even a newbie who had notoriously dated the king of shock radio, turning their fling and her PhD into a new career. Her first non-love-life book was due on her editor’s desk in a little less than eight weeks, not that she would want the book now. Not when Casey had been outed as no good at romances and as a total turn-off to men.

Casey didn’t have a clue how to begin the next book, a twenty-something take on having it all. Didn’t have a clue how her private life kept making headlines. She couldn’t think about anything with reporters hounding her every step and photographers jumping from behind shrubbery.

How she could have fallen for such a loser?

He’d barely slithered out her door after declaring he couldn’t live with the lies any longer, before the press started calling, asking if he had dumped her for his latest on-screen partner. His male partner. After his show went national, a new reality-based television network called on Nate, making him the star of his own radio-on-television drama. Since the tabloid calls had started she couldn’t concentrate long enough to order Thai take-out, much less figure how other women were supposed to have it all.

What woman in her right mind would buy a book about having it all from a dumped woman who had turned her man off women for life?

“Lightning only strikes so many times.” Her agent’s hollow-sounding words brought Casey back to Earth. Jane Brunner wasn’t happy with Casey’s progress, or lack thereof, and as always she got right to the point. A click sounded over the line and then, “I’m serious, Case.” Great. She was on speakerphone. “Forget that headline. You and I both know that all press is good press. What you need is some relaxation and romance, so get on the ship, Chip. Nate's a bastard. He wanted to break up, fine. But he shouldn’t have gone to the papers with that made-up story just to get more press for his stupid show. Did you see the last ratings book? Less than half a percentage of viewers are watching. He’s trying anything he can to keep that contract.”

“How do you know it isn’t true? Maybe he finally did face the truth about himself because of me,” Casey whispered, afraid the crowd waiting to board would call the tabloids as soon as they had a free second. Was that a teeny bit paranoid?

The cell phone at her ear slipped a bit. Wonderful. Even her ears were sweating. Casey huffed out a breath. She didn’t so much care that she’d been dumped. That had happened before. Men liked the idea of dating a writer, not an actual relationship with one, especially when the deadlines called and she didn’t sleep, want sex or keep her legs waxed.

But Nate had dumped her for a man. That was a new twist on the It’s-Not-You-It’s-Me excuse. Not to mention a bit unsettling. Still, if Nate had found love, more power to him. But did he have to go to the papers for a few headlines? She slapped her forehead against her palm. What she wanted was to wrap her hands around Nate’s neck and squeeze until his face turned as purple as an eggplant.

Instead, Casey clutched the cell phone tighter. The line for people boarding had stopped moving. Several passengers looked from the newspaper box to her and back. She should leave now before they made the connection. If she did it quickly, no one would even notice.

Jane cleared her throat. “Kiddo, a man doesn’t just up and decide he’s gay one morning over Corn Flakes. The story doesn’t wash. So don’t worry about it. Once the suits at that network figure out what the general public already knows—that the show is worse than sucking pond water through a straw—he’ll be out with some Hollywood starlet to get his name back in the papers and on the minds of teenage girls the world over. You’re better off without him.”

Like she didn’t know that already. But Nate killing her reputation to build his own just didn’t make sense. Sure the tabs loved him for the moment, but the backlash, assuming this was all a lie, would ruin him. The gay community did not like stars putting on and taking off the homosexual cloak as they saw fit, Anne Heche be damned.

Jane kept talking. “So you don’t believe you’ll find a forever kind of guy. At least find a for-right-now guy because, sweetie, you need to relax.”

“A battery-operated man is cheaper. And way more effective.” Casey sighed into her cellular phone at Jane’s tut-tut. Nate was always interested in his own pleasure first, leaving her sitting at first base while he celebrated a home run.

The older man standing in front of Casey moved forward a few scant inches and she entered the gangway doors. Once inside, Casey sighed as the blasting air conditioning cooled her face. Unfortunately, since the doors were wedged open, her back was still sweating.

She had dressed for the hot weather: a mini-skirt, fitted tee and wedge-heeled Roman sandals. She looked good, but the clothes were wilting in the hot Florida sun. Sweat pooled at the small of her back. She should have cruised to Alaska instead of the Caribbean.

“Live a little, Case,” Jane said. “This is a cruise, not the fifth circle of hell. Put on one of those skimpy bikinis you bought and lay by the pool. If you smile enough, you might even meet Mr. Right Now when you board.”

“I don’t plan on being bored,” she said, intentionally misunderstanding Jane’s words as the cell phone crackled. “Now that the story is out, I’ll hole up in my room, lock the door and work on the new book.”

A disjointed ring sounded over the phone, and then Jane sighed heavily. “Don’t hang up. I’ll be right back.”

Okay, maybe Jane was right. Eight-plus months of battery-powered stimulation and two weeks of ditching the press were more than enough. Her skin was sallow, her appetite nil. Casey shook her head.

That didn’t mean she needed to go looking for a man on a week-long love cruise. She picked at one perfect nail until the corner flaked free. Besides, all the semi-non-wretched men seemed to be taken. Or over sixty.

Jane came back on the line, sounding flustered. “Sweetie, I’ve got to go. Forget that you’ve been living out of your suitcase. Ignore what I said before and forget that you have another book due in a few weeks.”

Working with Disney by Don Peri
Safer Outside (A Mature YA Romance) (The Outside Series) by Kristina Belle
Gentlemen Formerly Dressed by Sulari Gentill
Sword of the Rightful King by Jane Yolen
Bones by the Wood by Johnson, Catherine
Bear v. Shark by Chris Bachelder
Renee's High School Reunion by Cheryl Dragon
Prisoner's Base by Celia Fremlin
The Nightingale Nurses by Donna Douglas
The Lion at Sea by Max Hennessy
Our partner