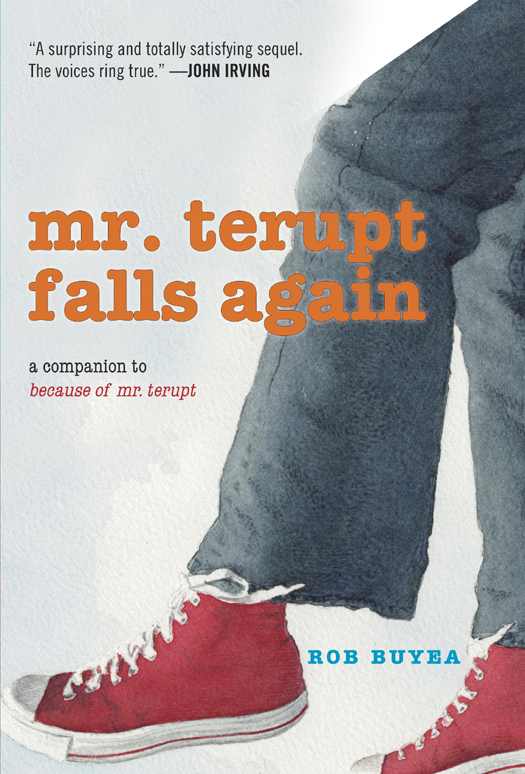 Visit us on the Web!
randomhouse.com/kids

To my wife and best friend, Beth
,
whom I fell for long ago

I
t was one of those farts that stunk so bad you could taste it. One of those that made your eyes water and forced you to tuck your nose under your shirt collar. It must have been hot and steamy coming out, because there’s no other explanation for its horrid stench. I know, it sounds like your classic silent-but-deadly—it wasn’t. Her fart ripped like a firecracker when it went off. That’s right—it wasn’t me! It was Lexie!

She dropped her stink bomb one day during the summer when we were helping Mr. T move our old classroom down to the sixth-grade annex. After last year, I wanted to spend all my time with Mr. T. I didn’t want a day to go by that I wasn’t with him. That’s why I spent my vacation helping him with the move. Besides, Mom and Dad weren’t around. They were working all the time—even in the summer,
business called. And my older brother, Richard, was off doing his own thing, which was DJing. He had his own equipment and did small parties, birthdays mostly. It wasn’t like we needed the money, and Mom and Dad didn’t force him to get a job, but that’s what he did. He said it helped him get the girls.

Lexie and I weren’t the only ones choosing to hang with Mr. T. Anna and Ms. Newberry helped a lot, and Jeffrey showed up some, too. There weren’t a lot of other people around school in the beginning, just our custodians, office staff, and our principal, Mrs. Williams.

I was on my way to our classroom one morning and stopped to take a leak before heading upstairs. There was a bathroom around the corner from the office that no one ever used, a small bathroom with a single urinal and stall. I don’t know what possessed me, but I’ve always liked to mess around in bathrooms. Old habits die hard. I walked in and the stall door stared back at me with a funny look on its face.

“Hi-ya!” I yelled, running and throwing a roundhouse karate kick at my target. I didn’t actually know martial arts, but I’d seen the move on TV. The door banged open and slammed shut after ricocheting off the wall.

Huh! I didn’t expect anybody to be in there. Like I said, no one ever uses this bathroom.

“Peter, I’m gonna kill you!” Jeffrey barged out of the stall. I had scared the snot out of him, all right—I could tell. He must have sprayed everywhere. He had wet spots all over his pants. I wanted to laugh, but Jeffrey glared at me.

I backed to the door. “I—I didn’t know you were in there. I swear.”

“You better grow eyes in the back of your head,” he warned.

I yanked the door open and hurried upstairs while Jeffrey stayed behind, probably to dry his pants. I got to work helping Mr. T.

If you’ve ever moved, then you know it’s all about boxes. Packing boxes, lifting boxes, and unpacking boxes. Boxes, boxes, and more boxes. After a while I got sick of them, so I tried cramming one with as much as I could fit, thinking that more stuff in each box would mean less boxes all together in the end. Luke, our class brainiac, would have been proud of my smarts. The problem was, I forgot about needing to lift the box after jamming it full of books and anything else I could get inside.

“Peter, you’ve got too much in there,” Anna warned. “You should take some stuff out.”

I liked Anna and all, but I wasn’t about to listen to a girl. I managed to pick the box up after almost getting a hernia, but then the stupid bottom fell out. I stood there like a dork, holding an empty cardboard box with junk all around my feet. Mr. T and Ms. Newberry got a good chuckle, and I know Anna had to bite her tongue.

After the super-heavy box strategy failed, I decided I’d take two normal-sized boxes and stack them one on top of the other. My idea was that two at once would lead to fewer box trips. Luke would have been proud again. The problem this time wasn’t that they were too heavy, but that I couldn’t
see
very well. I got the two lifted and started on my way, but I didn’t make it very far before I ran into one of the classroom desks. The corner hit me right in the you-know-what. I dropped the boxes and balled up on the ground, groaning and holding my privates. You’d think a boy would get some sympathy from a male teacher after an injury like that, but Mr. T had a funny way of showing he cared.