Murder at the Tremont House (A Blue Plate Cafe Mystery) 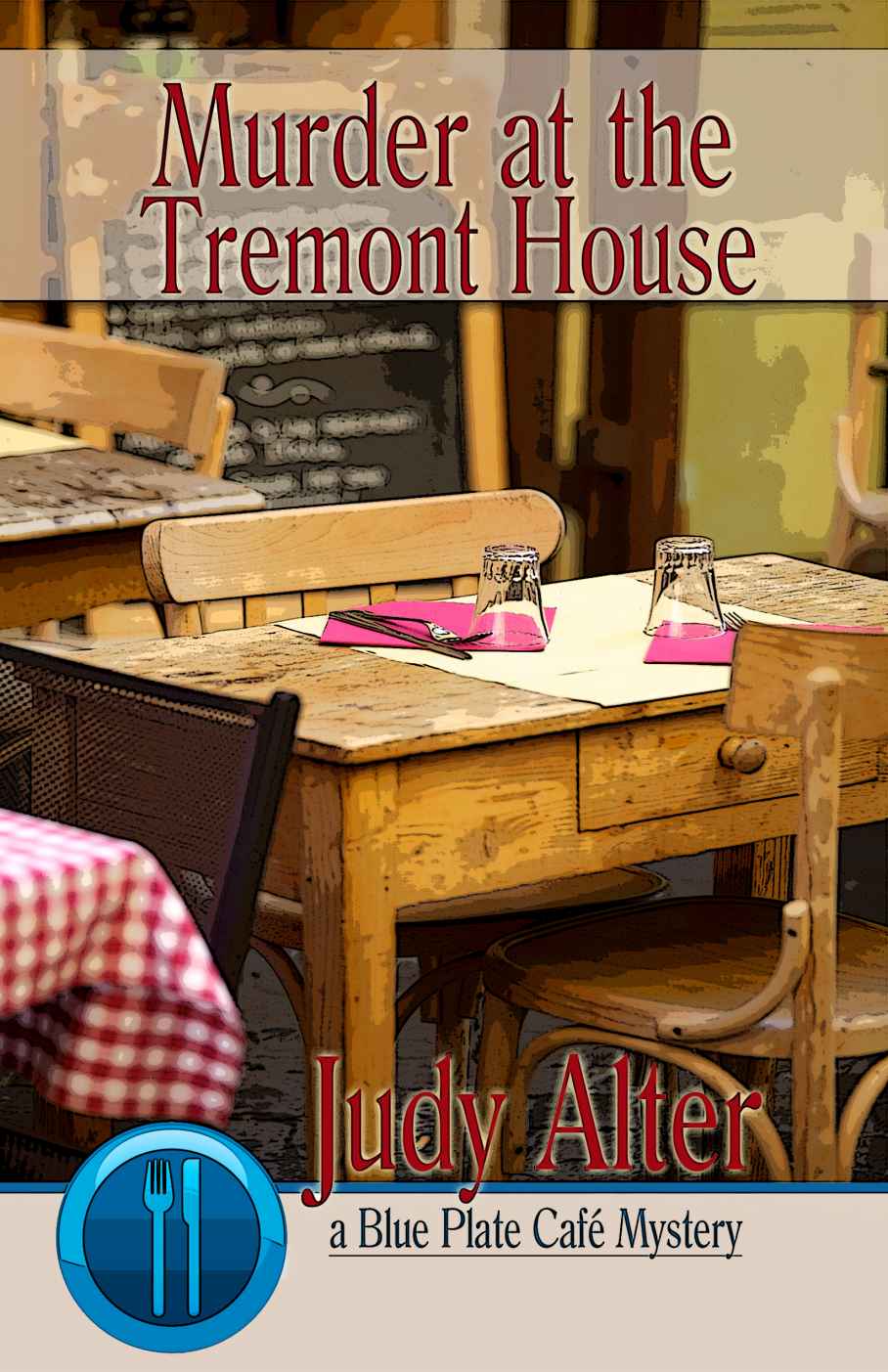 Murder at
the Tremont House

Murder at the
Tremont House

All rights reserved. The unauthorized reproduction or distribution of this copyrighted work, in whole or part, by any electronic, mechanical, or other means, is illegal and forbidden.

For Colin, Megan, Jamie, Jordan, and Melanie who spent many happy hours at a café in East Texas with me and many weekends at a nearby ranch over a span of twenty or more years. Thanks for the happy memories, guys!

MURDER AT THE TREMONT HOUSE

A journalist comes to Wheeler, Texas, intent on revealing the town’s secrets. Instead she finds a stubborn advocate of the town in Kate Chambers, and the tangled story leads to murder, kidnapping and a high-speed chase.

When free-lance journalist Sara Jo Cavanaugh comes to Wheeler to do an in-depth study of Kate
’s town for a feature on small-town America, Kate senses she will be trouble. Sara Jo stays at her sister Donna’s B&B, The Tremont House, and unwittingly drives a further wedge into Donna’s marriage to Wheeler’s mayor Tom Bryson. And soon she’s spending way too much time interviewing high school students, one young athlete in particular. Police chief Rick Samuels ignores Kate’s instinct, but lawyer David Clinkscales, her former boss from Dallas, takes it more seriously.

Sara Jo arouses animosity in Wheeler with the personal, intrusive questions she asks, and when she is found murdered, the list of suspects is long. But Kate heads the list, and she must clear her name, with the help of David and Rick. A second murder confirms that someone is desperate, and now Rick
is convinced Kate is in danger.

There
’s a love triangle, a cooking school, a kidnapping, a broken marriage, and a lot of adventure before the threads of this mystery are untangled and Wheeler can go back to being a peaceful small town. If it ever does.

Hindsight, they say, is twenty-twenty, but I think I knew
Sara Jo Cavanaugh was trouble the minute she walked into the Blue Plate Café. I thought at first she was just passing through town and stopped to warm herself, because it was one of those raw March days when damp makes a temperature of forty degrees feel like ten. No snow but drizzle, which, to my mind, is worse.

She came in shaking her head as though to ri
d it of raindrops. Her reddish-brown hair was caught in a ponytail so at first glance I thought she was a college student. She wore a parka, with the hood thrown back, and had a large and expensive-looking leather backpack slung casually over one shoulder. Stomping her booted feet—Doc Martens, I suspected—she straightened, looked right at me, and I saw she was older than I’d thought. Probably mid-thirties. But a good mid-thirties, fit, determined, clear-eyed. Maybe I should have been cautious right then, but I’m in the habit of welcoming newcomers to the Blue Plate Café.

“
Coffee. Black.” She plopped herself down on a counter stool and set her bag on the counter, taking out a cell phone which immediately absorbed her attention. I served the coffee and left her to her own devices.

Until she suddenly looked up, held out a forthright hand and said,
“I’m Sara Jo Cavanaugh.” We shook, and I introduced myself, and then she pressed a business card into my hand. It simply identified her as a freelance writer.

“
Ever get bored in this tiny town? Think it’s time to move on from waiting tables in a café?”

I bristled.
“Well, first of all, I own the café. And second, I had a fairly long career as a paralegal in Dallas. I’m back here by choice.” No need to tell her about Gram talking through me. I’m no psychic, don’t even believe in the paranormal, but after she died, when the future of the café was up in the air, I’d open my mouth and find myself saying I was going to move from Dallas back to my hometown of Wheeler to run the Blue Plate. I swore Gram was putting words in my mouth, wherever she was, and then sometimes she’d talk to me, mostly in platitudes, and she rarely stayed around to listen to my reply. A few times though she did give me helpful hints, and I found the thought of her presence comforting. I don’t usually tell people about it, because they’d think I’m weird.

This Cavan
augh woman whipped out an electronic notebook and began making notes, while I stood in amazement. This was no ordinary person passing through town—besides, on the road through Wheeler, where would she be coming from or going to? Most travelers took the Interstate that was at least fifteen miles to the north or 64, the back road to Tyler, which was about five miles from us.

Just as abruptly, she whipped the notebook shut and explained,
“I’m working on a study of small-town America, and I’ve chosen Wheeler as a sort of microcosm. I’ll be here a while. I don’t suppose there’s a hotel. Any idea where I should stay? Travel agent suggested The Tremont House.”

Family loyalty runs deep, even if my twin sister, Donna, and I see the world differently from almost any angle. Donna had finally opened her B&B on the edge of town in what was once a grand, two-story brick farmhouse
belonging to the Tremont family, so she called it The Tremont House. Now it was elegant, with a state-of-the-art kitchen, gleaming hardwood floors (though I’d never forget the picture in my mind of Irving Litman lying in a pool of his own blood on that dining room floor). The rooms offered comfy down quilts—wonderful in weather like this—and TV, Wi-Fi, semi-private bathrooms, and all the comforts of home. Of course, there were only four guest rooms. And Donna served breakfast—sticky buns and breakfast casserole that I sent over early every morning and she pretended she’d been slaving over since dawn. I kept her secret.

The
Tremont House sat on a large property with several wooded areas, thickets, a small pond, and several outbuildings—an old barn near falling down, what appeared to be a tool shed, built of concrete block, and what may once have been a guesthouse or servants quarters. Sometimes Henry, my nephew, and his buddies wandered around through the thickets, though Tom, his father, warned them about snakes and buildings that could collapse on them. When Tom said, “I know. I shouldn’t worry about them so much,” I simply replied, “Boys will be boys. And they usually grow up without significant damage.” His sisters Ava, now almost a teenager, and sweet young Jess never went near The Tremont House, which suited Donna. She didn’t think children belonged around a B&B but she tolerated the boys playing on the grounds. They could not, however, track mud into her newly sparkling kitchen or venture into the living areas. Meanwhile the girls were at home, wishing their mother was too. Not a happy situation.

I brought myself back to the present moment and Sara Jo Cavanaugh
’s question. “Sure. The Tremont House would be my choice. My sister owns it.”

“
So your family is prominent in town?”

“
I wouldn’t say that. My grandmother, Johnny Chambers, owned this café for years, and she was a legend. Donna and I don’t quite reach that height.”

Just
then, Rick Samuels walked in and sat at the counter, two stools away from the newcomer. I didn’t have to ask. I served him black coffee and said, “Yes, I have one sticky bun with your name on it.”

“
Good job, Kate. Thanks.” Rick, who was never interested in much beyond his own duties, which he took very seriously, cast a sidelong glance at this Sara Jo and ventured the first casual conversation to a stranger I’d ever heard from him. It wasn’t a very original line. “New in town or just passing through?”

She looked long enough to take in the crisply ironed
, tan uniform and the police badge. “I’m here to stay for a while. Researching small town life.”

The corners of his mouth did that funny thing they d
o when he means to smile. “Wheeler can show you all the good and the bad.”

Now what did he mean by that?

She asked the question that was on my mind but whipped out that notebook again as she did so. “What do you mean?”

Rick looked a little startled, but he plunged right
in despite the daggers I was looking at him. “Well, we have our share of problems. Life in a small town isn’t always as tranquil as I thought it would be when I came here from Dallas.” He thought a minute. “Let’s go sit at a table, and I’ll tell you about Wheeler.”

If I
’d really had a dagger, I’d have thrown it at him.

Rick and I sort of are a couple and sort of aren’t. That’s hard to explain, but the first few months after I came back from Dallas, after Gram died suddenly, were hard, to put it mildly. I had my suspicions about Gram’s death, though Rick dismissed them, and then the mayor, who was determined to shut the café down and buy it at a fire-sale price, got deathly ill from eating greens from the Blue Plate. Donna complicated things by forging ahead with her plan for a B&B, even though she didn’t have financing, and she enlisted a “financial advisor” from Dallas and then had an affair with him. When he was found shot dead, Donna was charged, and I had to work to clear her name, in spite of the prickly relationship we had. With Gram helping from the beyond, I unearthed evidence against Gram’s accountant, a mouse of a man, or so we thought, named William Overton. I darn near got myself killed when I confronted him, and Rick hasn’t forgiven me completely yet. And then there was Steve Millican, who owned a nursery, sold drugs from it, tried to woo me, and built me a fence for my yard on his last day of freedom. Rick and I didn’t see eye to eye about that either.

But we
’ve decided to let bygones be bygones. Well, he has. I still have some rebellious feelings about being treated like the airhead party girl from Dallas, and he still pulls his “I am the police chief and I take my job seriously” attitude on me some. But we go to dinner and maybe a movie in Canton (there’s none in Wheeler), or I cook and we watch TV. I’ve come to see the soft side of Police Chief Rick Samuels, and I like it.

And I did not like him taking Sara Jo Cavanaugh off into a corner to tell her about Wheeler.

If you can
’t beat them, join them. I got myself a cup of coffee and headed over to the corner table, the one at which I thought so many assignations had taken place and plots been hatched. As far as I was concerned, it’s a jinxed table, but that didn’t stop me.