Murder in the North End 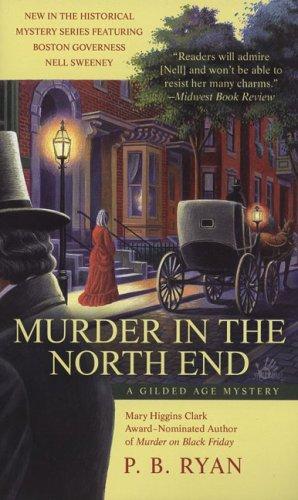 “A unique and enjoyable series.... The author uses the historical period to great advantage, depicting the class separations and prejudices that existed at the time without romanticizing them. Nell and Will are both fascinating characters. From wholly disparate backgrounds...they make a great sleuthing team as well. It’s always a good day when a new Nell Sweeney book arrives.”
CA Reviews

MURDER IN THE NORTH END

Copyright © 2006 Patricia Ryan. All rights reserved. With the exception of quotes used in reviews, this book may not be reproduced or used in whole or in part by any means existing without written permission from the author.

Originally published by Berkley Prime Crime, a division of Penguin Group (USA) Inc., as Book #5 of The Gilded Age Mysteries

“I don’t mind if I do,” Gracie responded in her best attempt at an upper-crust English drawl. The five-year-old offered her tiny cup to be filled with imaginary tea from the little gold-rimmed bone china teapot in her governess’s hand. “And a spot of cweam, if you don’t mind?
Cream,”
Gracie corrected before Nell had a chance to do it for her. Her diction, thankfully, had seen major improvements over the past few months.

“More for you, Lady Wigglesworth?” Nell asked as she turned to her young assistant, Eileen Tierney.

“I shouldn’t, but I don’t suppose another sip or two would hurt,” said the waifish, flaxen-haired Eileen as she held out her cup. Her own attempt to sound like a British aristocrat was rather less successful than Gracie’s, due mainly to an Irish brogue far too deeply ingrained to disguise. “Aye, and this here’s the perfect mornin’ for a tea party, it is. Yes, indeed. What ho. Cheers, and all that.”

“Another drop, Lord Hubble-Bubble?” Nell proffered the teapot to Gracie’s little red poodle, Clancy, who sniffed curiously as she tilted it over his cup.

“I say, Hitchens, have you seen the Sweeney girl?”

The clipped inquiry, which came from beyond their little makeshift tent, prompted grimaces from Nell’s tea party companions. Even Clancy let out a weary little sigh.

“Mrs. Mott,” Gracie mouthed with a theatrical expression of repugnance.

From the nearness of the housekeeper’s voice, Nell realized she must have crept right into the third-floor nursery on those silent-as-death feet of hers. Edward Hitchens, Mr. Hewitt’s valet, was probably passing outside in the hall.

Nell was about to announce her presence when Mrs. Mott added, in a tone of hushed significance, “There’s a constable downstairs, asking for her.”

Hitchens responded to this news with an eloquent little grunt. The starchy valet was the closest thing Evelyn Mott had to a confidant among the household staff. Like the dour old housekeeper, Hitchens was appalled at Nell’s having supposedly finagled eccentric Viola Hewitt into hiring her as Gracie’s nursery governess despite her humble origins and even worse, much worse, her Irishness. It mattered not that Nell blended flawlessly into the world of Brahmin privilege in which she lived and worked. She dressed like them, spoke like them, and comported herself like them, and with the exception of a slight coppery burnish to her hair, there was nothing overtly Gaelic in her appearance to give her away. Still, she was Irish, foreign vermin in the eyes of most Bostonians, lowborn or high.

“A
constable?”
Hitchen said. “Good lord. He didn’t come to the front door, did he?”

“He did, indeed, just as bold as you please.”

“God knows what the neighbors will think.”

With a contemptuous little huff, Mrs. said, “God knows what they’ve been thinking for the past six years, with that Sweeney girl waltzing the child up and down Colonnade Row as if they belonged here. I’ve told Mrs. Hewitt it isn’t fitting, but you know her—she just does as she pleases, with no regard for what people think, or how it reflects on Mr. Hewitt.”

“Bad enough to take the child in,” Hitchens sniffed, “but to raise her like one of the family, with an upstart Irisher looking after her instead of a proper governess...”

“It’s not as if she merits a proper governess, but then, if she’d been correctly dealt with from the first, she’d be in the House of Industry instead of constantly underfoot here. I don’t care if she
was
sired by a Hewitt, a chambermaid’s by-blow has no business prancing about like a little princess under the roof of one of the best families in—”

“Mrs. Mott, is that you?” Nell called out as she belatedly realized, from Gracie and Eileen’s puzzled scowls, that they’d heard far more than they should have. She was tired, having awakened well before sunrise to pack her and Gracie’s luggage, or she would have put a halt to the conversation the moment she realized where it was going.

She folded back the sheet and stood, smoothing out the wrinkles in her traveling dress of brown summer-weight wool. “Ah, and Mr. Hitchens, too. How lovely of you to pay a call on us this morning—a rare treat. Would you care to join us?” she asked, holding up the diminutive teapot.

The housekeeper and valet blinked at her from the doorway of the nursery, an opulent bower fitted out with child-sized rococo-inspired furniture swathed entirely, as of yesterday, in snowy linen sheets. Hitchens turned and left in stony silence, leaving Mrs. Mott to frown at Gracie and Eileen as they clambered to their feet.

Stiffening her back, her hands clasped at her waist, the housekeeper said to Nell, “Your presence is required downstairs. There is a Constable Skinner waiting to speak with you in the music room.”

Skinner.
That ghastly little weasel. What on Earth could he be wanting with her?

Nell suspected she knew why Mrs. Mott had had him sequestered in the music room instead of the front parlor, as was customary. The parlor, which looked out onto the elegant stretch of Tremont Street known as Colonnade Row, had numerous tall windows, all of which would be thrown wide open with their curtains tied back on this sultry summer morning. The music room, on the other hand, faced a little-used side street. Even with its windows uncurtained, there would be few passersby to notice a policeman paying a visit to the venerable Hewitts.

“I’ll be down shortly,” Nell said.

“Do expedite your business with this...gentleman,” said Mrs. Mott. “It is imperative that we all be ready to leave promptly at ten o’clock. That’s less than an hour from—”

“Our bags are all packed and in the entrance hall,” Nell said. “We just thought we’d enjoy a spot of tea before our trip.”

Gracie lifted her empty tiny cup toward the housekeeper as if in a toast, and brought it to her lips. Mrs. Mott fixed the little girl with a nostril-flaring grimace before stalking away.

“Miseeney,” Gracie asked as she crouched down to gather Clancy in her arms, “what’s a by-blow?”

Eileen looked at Nell, her bottom lip caught in her teeth. She clearly
did
know what a by-blow was, even if she didn’t know, or hadn’t until now, that Viola Hewitt’s adopted daughter was the illegitimate child of one of her own servants. Viola had long ago forbidden the household staff to speak of Gracie’s origins, although clearly Mrs. Mott and Hitchens felt themselves above such constraints. As far as Gracie knew, her Nana had picked her out special after bringing up four sons because she’d always longed for a daughter.

“A by-blow...” Nell began hesitantly. She smoothed a hand over Gracie’s plaited and beribboned hair, as black and glossy as that of her father. “It’s a silly word for a child. It doesn’t mean anything.”

The little girl nodded uncertainly as she nuzzled the little dog, who responded by licking her chin. “What’s the House of Industwy?” Gracie was at the age where, once the questions started, they just kept coming.

Eileen looked at Nell as if wondering how she was going to answer that one.

Nell said, “It’s...a big house on a place called Deer Island where people go to live.” A house for paupers, orphans, the mad and diseased and doomed—a place not unlike the Barnstable County Poor House, where Nell had spent much of her dismal youth.

“It’s on an island?” Gracie asked, bobbing up and down as she did when she was excited. “Can we go live there after you and Uncle Will get mawwied?
Married?”

Nell’s sham courtship with the Hewitts’ eldest son, William, was a fiction intended to facilitate his spending time with her and Gracie without arousing unseemly whispers. Will had proposed the ruse last summer in order to silence speculation that the prim and proper young governess might be carrying on with the notorious surgeon-turned-gambler who was the black sheep of the Hewitt family. If they were thought to be unofficially engaged, Will reasoned, no one would question their friendship.

It was a friendship that could never amount to more, given that
Miss
Nell Sweeney was, in fact, already married to an inmate at Charlestown State Prison. Duncan, whom she hadn’t seen in two years, was currently ten years into a thirty year sentence for armed robbery and aggravated assault. The only people in Boston who knew about him, and the rest of her questionable past, were Will and Father Gorman at St. Stephen’s, who served as her confessor. They were the only people who must ever know, lest she torn away from this charmed life and the child she’d come to love as her own.

That child was now staring at her with her big, guileless eyes, waiting to find out whether she could take the place of a real daughter to the couple she’d grown to consider her surrogate parents. It was a question she’d asked a number of times since learning, no doubt through servants’ careless comments, that Nell and Will were presumably destined to marry. This was the first time, however, that she’d proposed the county almshouse as their family home.

“We can’t live at the House of Industry, buttercup,” Nell answered, deliberately skirting the crux of the issue. “It’s for people who don’t have any other home. You’ve got a home here with Nana.”

“But Nana’s legs don’t work. That’s why she needs you.” Clutching Clancy tight to her chest, the child gazed up at Nell with the exaggerated pathos of an actress in some tawdry melodrama. “I need you, too, Miseeney. Who will look after me if you aren’t here?”

“What about Miss Tierney?” Nell asked.

“Aye, what about me?” Eileen demanded with pretended severity as she tweaked one of Gracie’s braids.

“She could come, too, couldn’t she? Please, Miseeney?” the child begged, hugging the dog tighter.
“Pleeease?”

Nell crouched down so that they were at eye level and told her what she always ended up telling her. “Engagements can last a very long time, sweetie. It might be years before Uncle Will and I get married.”

“We’ll settle that when the time comes.”

“I don’t have time to discuss this right now.” With a kiss on Gracie’s forehead, Nell stood and said, “There’s a constable downstairs who wants to speak with me, and one mustn’t keep constables waiting. Why don’t you and Miss Tierney make sure you haven’t left anything behind that you want to bring to the Cape. I’ll be back as soon as I can.”

As she was leaving, Nell heard Gracie ask Eileen, “Miss Tiewny, what does ‘sired’ mean?”

Driven to the Edge: A Bad Boy Hitman Romance by Morgan Black
One Day In Budapest by J.F. Penn
The Danger of Desire by Elizabeth Essex
Through the Devil's Eyes: Notes for Nicky by Jennifer Loren
-Worlds Apart- Ruination by Thome, Amanda
Waiting for Unicorns by Beth Hautala
My Hero Bear by Emma Fisher
Fear of Frying by Jill Churchill
Call Of The Moon by Loribelle Hunt
Supreme Justice by Phillip Margolin
Our partner