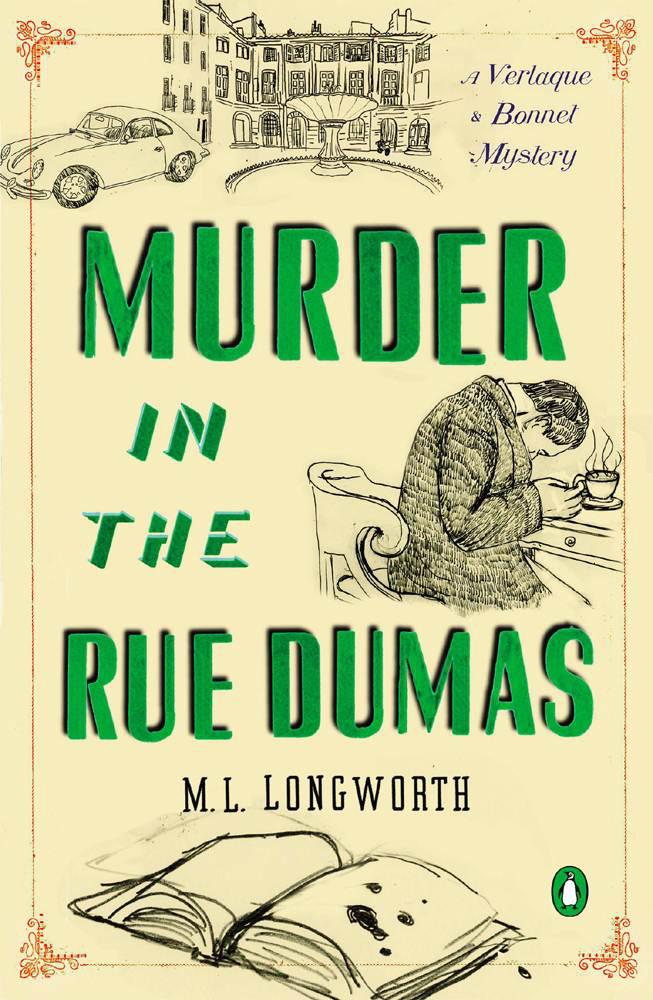 Murder in the Rue Dumas

M. L. LONGWORTH
has lived in Aix-en-Provence since 1997. She has written about the region for the
Washington Post
, the
Times
(UK), the
Independent
(UK), and
Bon Appétit
magazine. She is the author of a bilingual collection of essays,
Une Américaine en Provence
, published by Editions de La Martinière in 2004, and a novel,
Death at the
Château Bremont
, published by Penguin in 2011. She divides her time between Aix, where she writes, and Paris, where she teaches writing at New York University.

Murder in the
Rue Dumas

A VERLAQUE AND BONNET
PROVENÇAL MYSTERY

Publisher’s Note
This is a work of fiction. Names, characters, places, and incidents either are the product of the author’s imagination or are used fictitiously, and any resemblance to actual persons, living or dead, business establishments, events, or locales is entirely coincidental.

Except in the United States of America, this book is sold subject to the condition that it shall not, by way of trade or otherwise, be lent, resold, hired out, or otherwise circulated without the publisher’s prior consent in any form of binding or cover other than that in which it is published and without a similar condition including this condition being imposed on the subsequent purchaser.

For Ken and Eva

Murder in the Rue Dumas

Chapter One: Hoping to Impress

Chapter Four: With Every Job…

Chapter Five: One in a Million

Chapter Six: The Unloving and Unloved

Chapter Sixteen: Home Is So Sad

Chapter Seventeen: To Catch a Thief

Chapter Twenty-two: A Pint of Guinness

Chapter Twenty-four: The 7:43 to Paris

Chapter Twenty-five: The Little Dog under Their Feet

Chapter Twenty-six: The Black and the White

Chapter Twenty-nine: A Confession over Grappa

Chapter Thirty-two: The Bay of Poets

Chapter Thirty-nine: Sympathy for the Guilty

Chapter Forty: Still Hoping to Be Appointed the New Doyen

T
he friendship between Yann Falquerho and Thierry Marchive had surprised everyone at the university. Not only were they competing for the same doctoral fellowship, they were also physically and socially different in every way. Yann was tall and blond, the son of a television producer from Paris now divorced from Yann’s mother, an interior designer. Thierry was dark, short, and stocky, and came from more humble origins: his father was a French teacher in a Marseille high school, and his mother—still married to his father—an underpaid dietitian at the Hôpital du Nord.

The two students walked quickly, speaking loudly and with few pauses, for they were both the youngest of three children—here was something they shared—and were well versed in the effort required to be heard at the dinner table. “Hurry up,” Yann said over his shoulder to his friend. “All of the choice food will be gone by the time we get there.”

“I can’t help it if I don’t have your giraffe legs,” his friend replied,
skipping in order to keep up. “We would have left on time if you hadn’t answered the telephone and had that long conversation with what’s-her-name.”

“Suzanne,” Yann said slowly. “Suzanne, she was named after the song.”

“Right…your childhood sweetheart…her father the town doctor in Carnac, where your bourgeois family spent their idyllic summers.” Thierry stopped to mimic playing a guitar and did a very acceptable imitation of Leonard Cohen.

he sang, until he slipped off of the narrow sidewalk and onto the street.

“Shut up, you imbecile,” Yann laughed. “Yeah, idyllic summers, all right. So idyllic that my parents divorced. Maybe it was all that rain in August…they were stuck together inside our impeccably designed beach house.” That was one of the things that Yann liked about Thierry: the fact that he wouldn’t recognize, nor care about, an impeccably designed interior even if it hit him in the face. Yann walked on ahead, frowning, as he thought of his mother and father with their respective new partners, neither of whom he cared for.

The two young men reached an elaborately carved wooden door on the place des Quatre Dauphins and rang the buzzer that was set into a polished brass plaque, marked “Professeur Moutte.” The door buzzed back and clicked open with a thud, Thierry holding it open for his friend and saying, “After you!” Thierry saw that Yann had suddenly become quiet, as he often did when the subject of his parents came up—they had divorced two years previously—and
Thierry thought he should try changing the subject. He pictured the Falquerho family sitting in a living room with furnishings that were impractical for a vacation house—white, for example—watching in silence the gray waves crash onto the shore. He spoke, trying to remind Yann of other, happier things. “All you think of is food. And Suzanne, naturally.” Yann laughed and walked into the apartment building’s cold, damp foyer, looking forward to this evening’s free dinner, and Suzanne, whom he would see at Christmas break.

World's End by T. C. Boyle
Deviation by A.J. Maguire
Painkiller by Robert J. Crane
The King of Plagues by Jonathan Maberry
FinsFantasy by Jocelyn Dex
Winning the Game of Thrones: The Host of Characters and their Agendas by Frankel, Valerie
Twilight Fulfilled by Maggie Shayne
The General and the Elephant Clock of Al-Jazari by Sarah Black
Last Summer in Louisbourg by Clare Mowat
The Pack-Retribution by LM Preston
Our partner