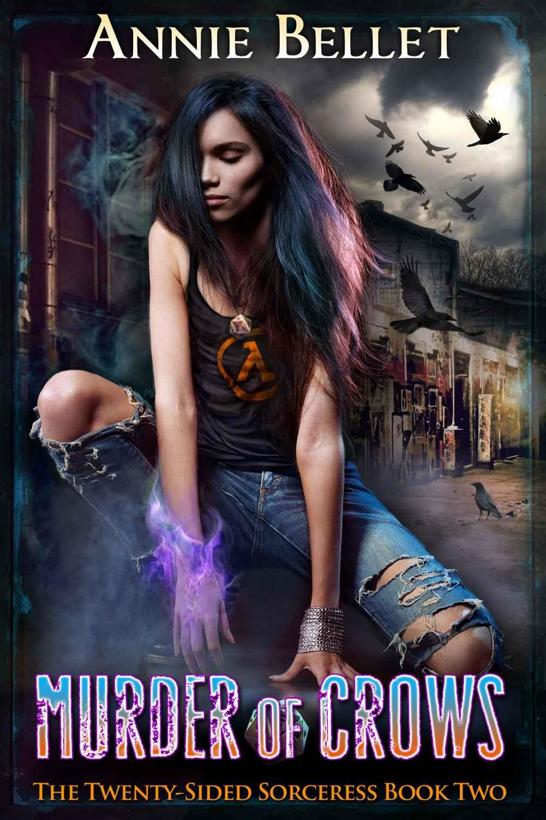 This novel is a work of fiction. All characters, places, and incidents described in this publication are used fictitiously, or are entirely fictional.

No part of this publication may be reproduced or transmitted, in any form or by any means, except by an authorized retailer, or with written permission of the publisher. Inquiries may be addressed via email to
[email protected]
.

If you want to be notified when Annie Bellet’s next novel is released and get free stories and occasional other goodies, please sign up for her mailing list by going to:
http://tinyurl.com/anniebellet
. Your email address will never be shared and you can unsubscribe at any time.

This book is dedicated to Matt, Greg, and Jane, for putting up with me.

And also to the Indie Asylum, for keeping me sane.

The battlefield was quiet in the summer sunlight. I heard only the hum of insects and a light shushing of wind. My back was sweaty where I pressed it against the bark of an oak, using the tree as cover from the enemy I couldn’t see or hear, but knew was out there across the meadow. The pile of ammo at my feet had dwindled down to a double handful. In the shade of the trees to my right, Harper’s brother Max lay prone, red dripping down his chest and staining the dead leaves beneath him.

To the other side of me, Alek crouched among slender aspen trees, his arm useless, his leg oozing colors, his gun on the ground. He gave me a Gallic shrug and slight smile, the afternoon breeze lifting his white blond hair off his forehead, his ice blue eyes glinting with dark humor.

A paintball burst on a tree trunk just over his head.

“Maybe you should untie my hands,” I said.

“That’s not the point of the game,” Max pointed out.

“For a corpse, you are doing a lot of talking.” I glared at the kid, but he just grinned.

Peeking around the tree, I surveyed the meadow. Ezee’s body was a dark lump in the grass. He was the only one I’d brought down so far, no thanks to the “help” on my team. I was pretty damn sure Alek and Max had gotten shot on purpose so that I’d have to figure out how to take down Harper and Ezee’s twin, Levi, on my own.

We were gathered on this lovely summer Sunday out at The Henhouse Bed and Breakfast where Harper and Max’s mother Rosie was letting us train. Three months ago, I’d saved her from an evil warlock, but exposed myself to an old rival. A man who would come after me.

Kind of surprising he hadn’t already, really. Samir, my psychokiller ex, had restrained himself to sending cryptic postcards and had yet to show his face. I knew he would tire of sending messages and show up eventually.

I needed to get my sorceress powers stronger before that happened. Much, much stronger.

Hence the paintball game of ultimate unfairness. Ezee, Harper, and Levi were all accomplished paintballers as well as shape shifters, which meant they got super speed, strength, extraordinary senses, and great reaction time to go with their crack shot abilities, and they were on the opposing side. That left me with Alek, who should have been good at paintball since he could shoot real guns just fine, and Max, who was more enthusiastic than skilled. Sure, my team were shifters also, and yet here they were, out of the game already without more than a couple shots fired.

Leaving me, with my hands literally tied behind my back, to somehow win this thing. Magically. No gun. No hands. Just power. Only the rules said I had to win by hitting my opponents with paintballs, so I couldn’t just wrap a shield around myself and go hunt them down that way. No shields allowed today, either.

They’d taken away all my fun. By “fun” I do mean crutches. Bastards.

A green ball splattered on the tree trunk behind me.

“Best two out of three?” I yelled.

Another paintball, this one orange, smacked into the tree, misting paint onto my nose.

“Guess that’s a no,” I muttered as I wiped my nose on my shoulder as best I could.

“Perhaps if you sit here all day, they will get bored and come to you,” Alek said. He pulled a knife from his boot, using its point to pick at his fingernails.

I considered telling him where to stick that knife but decided to concentrate on how I was going to win this thing. I looked around the tree again. The meadow sloped slightly downhill toward the thicket of saplings and brush where Harper and Levi were holed up. They couldn’t cross the meadow, as Ezee’s suspiciously snoring body demonstrated, but neither could I go to them. I couldn’t even see them down there and I knew they’d be able to see me much clearer with their supernaturally enhanced senses.

If only my spirit guardian, the somewhat wolf-like creature I creatively called Wolf, was useful for this shit. She was lounging in the shade deeper into the trees in which I was currently hiding, her tufted ears perked as I glared at her and she swished her long and thick black tail. Wolf could only help me with magical attacks and problems. Not that she would help here anyway. She seemed to understand this was all play and was content to watch. Traitor.

I twisted my arms a bit, testing the orange baling twine’s knots. They weren’t tied that tight, the purpose wasn’t to really restrain me but to keep me from using gestures to help me cast spells. I was much better at casting when I could use my hands to direct energy. It was another crutch. Truly great magic shouldn’t need hands. I needed my brain to be able to think outside the normal physical limitations of the world.

It’s easy to pick up a couple rocks or paintballs with magic when you can just extend it as a gesture your body and mind are already used to. But visualizing having three or four or five hands? Tougher. The human brain isn’t used to being able to lift five things at once in all directions. In order to get my brain to do it, I had to break reality a little, starting in my thoughts.

Break reality. I clung to that thought. I had been flinging paintballs at them like I was the gun, but there was really no need to do so. I didn’t need to conform to the physics of a gun when I threw. I could be like that one cheesy movie where they bent bullets and stuff.

“You aren’t dead,” I whispered to Alek, “so get ready to help.” I didn’t have super senses, but I had someone who did.

Alek’s leg and arm had been hit, but he wasn’t technically out, though he couldn’t shoot anymore. That was okay, I didn’t need his gun. I needed the tiger in him, his keen hunter’s senses and instincts. He was a freakin’ Justice, the shifter equivalent of Robocop, basically. Judge, jury, and sometimes executioner. He should be able to handle a little long distance reconnaissance.

“What do you need?” he whispered back.

I told him. He started to laugh, but choked it back and nodded.

I dropped down carefully to make room by the oak trunk for Alek, keeping my profile as low as possible. I closed my eyes and visualized the thicket Harper and Levi were hiding in. I heard the slight shift of clothing as Alek crept up to the tree I’d been hiding behind, felt his warmth as he crouched against my body. I was almost sad Max was lying right there, because suddenly I could think of a lot more interesting things to be doing in the woods on a warm summer day.

I opened my eyes, keeping the image of the thicket in my mind as I looked down at the small pile of paintballs. One of the exercises I do, the only one I kept doing in my twenty-five years of running and hiding from Samir, was to lift multiple stones and form patterns into the air. The paintballs weren’t much different than the stones. About the same size, a little lighter.

Usually, however, I had my hands to help me visualize things. I couldn’t even grab my talisman, the silver twenty-sided die around my neck, for a focus.

I summoned my power, letting it stream through me in a shivering rush, and lifted one paintball, then another, and another, until all eight remaining were in the air. I sent them up through the trees, as high as I could without losing my thin tether of magic and control. I just hoped I could stretch my magic across the meadow. Too late now to back out of the plan. If this didn’t work, I’d have to surrender. No more ammo.

I nodded, not trusting speech.

Alek whipped his head out from behind the tree, squinting down the field, his eyes probably picking out details in the shifting shadows of the thicket that I would never know.

A paintball burst on the tree by his head, another whizzed by and splattered on the next tree in.

“Send the balls, I know where they are,” he whispered.

I sent my paintballs, still high up in the air, down the left of the field, hoping they would be far out of Harper and Levi’s lines of sight. Alek looked around the tree again, this time from the other side.

“Harper is behind that bush with the dark green and white leaves. Levi is crouched behind those two saplings with the twinned trunks.”

I peeked around the tree, picking out where he said they were. I saw nothing but slight movement in the leaves of the bush which could have been wind. If Alek was wrong, we’d lose.

Fortunately, in the three months I’d been sharing my bed with him, I’d learned that Alek wasn’t wrong very often. And he hated losing almost as much as I did.

In my mind, I gathered the paintballs into two groups of four, pushing on my magic to send one group over the bush where Harper was and the other group around behind the saplings. Their foliage wasn’t thick, the trees too young to have many branches. I guess Harper and Levi hadn’t thought about cover from above.