Murder on the Appian Way 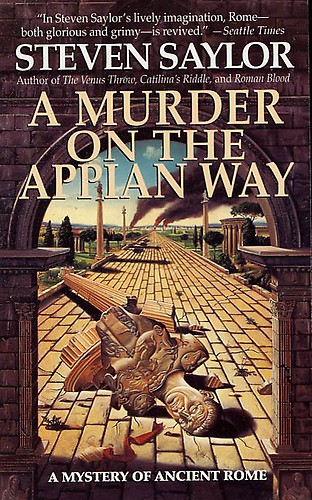 Murder on the Appian Way

‘What Steven Saylor brings to his work are a profound knowledge

of the history and culture of ancient Rome and a gift of storytelling only exhibited by those few who are born with it. His work can be enjoyed by all mystery readers regardless of whether they prefer cosies or hard-boiled crime fiction.'
Deadly Pleasures

'Among the best historical series ... and the best to use an Ancient Roman background.'
Ellery Queen's Mystery Magazine

'Part of the attraction ... comes from watching lofty figures in history, tragedy and Latin behaving as nobly and sordidly as real people in daily life ... And Saylor is not the dry-as-dust type; he offers us sex, violence, duplicity and a worldly acceptance of the varieties of human behaviour — there's an unpretentious lightness of touch in everything.'
Boston Globe

'You read Saylor because of the skill with which he brings an ancient world to life.'
Lambda Book Report

'I can't say enough good things about Savior's style, his scholarship, or his mastery of his period.'
The Poisoned Pen

'Gordianus the Finder is a Roman private investigator, something like Sherlock Holmes and something like the hardboiled American PI... [He] visits all strata of Roman life and gives a vivid picture of ancient society to go with the complex puzzle ... This is a remarkable achievement.'
Ellery Queen's Mystery Magazine

'A story greatly enhanced by its vivid characters ... A classic historical mystery, in every sense.'
Publisher's Weekly .

'A combination of Hitchcock-style suspense and vivid historical

details make Stephen Savior's
Roman Blood
one of the most gripping — and also informative — mysteries to have appeared in quite some time.'
Post-Gazette, PA

'A brilliant example of Savior's mastery of his material... triple sensitivities of style, place and plot that readers will not fail to appreciate for themselves.'
Lambda Book Review

'An exciting trip through the history and politics of Rome.'
Deadly Pleasures

'Saylor skilfully strings together the multiple threads of the plot to reveal dirty dealings of murder, greed, incest, deceit, corruption, and vices galore. A well thought out and finery tuned mystery novel.'
The Community Voice

"This engrossing historical novel... contains all the elements that make an entertaining mystery and also provides a view of life in Ancient Rome. Highly recommended.'
Booklist

'Roman Blood
has the elements that make a good old-fashioned detective story great - dangerous thugs, powerful villains and a brooding, noir ambience ... The plot is tightly woven and Saylor threads history deftly throughout the novel... The action is fast paced and at times thrilling ... There are enough surprises along the way to satisfy even the most accomplished mystery reader, and the difficult setting is ultimately pulled off with convincing flair. The conclusion is especially satisfying and chilling.'
Daily Texan

'A witty, meticulous re-creation of Cicero's Rome as well as a deft and clever mystery.'
The Boston Guide

Praise for
Arms of Nemesis

'A most intriguing mystery ... highly researched and authentic historical background ... characters all of whom are realistic flesh-and-blood people.'
The Southbridge Ma. News

'Saylor manages to be both entertaining and exact in his depictions of Roman life and customs. He is also a deft writer of characters and
Arms of Nemesis
is filled with eccentric and engaging suspects ... a surprising and suspenseful mystery.'
First Hand

'Saylor interweaves history and suspense into another seamless thriller ... A marvellously authentic slice of antiquity that will serve as a savoury treat for fans of both mystery and historical

'Fine mystery, great history, this novel is crammed with vivid details of patrician and slave life. After reading the below-decks description of a trireme you'll thank your lucky stars you're not a

'Sensuously written ... Richly detailed bacchanalian feasts and mesmerizing visits to the Sybil at Cumae lead to the spellbinding

'Arms of Nemesis
has a well-researched, authentic feel, captivating descriptions of Roman customs and mythologies, and interesting characters, enlivened from the pages of history.'
San Francisco Sentinel

'A top-notch murder mystery ... There is enough excitement... enough love ... enough blood ... enough pathos ... And yet the end is satisfying.'
The Community Voice

'Engrossing. . . ironic and satisfying. . . Saylor's understanding of the rich complexity of Roman life has a universal ring.'
San Francisco Chronicle

There's no doubt that history buffs will savor the splendid historical detail.'
Booklist

'Saylor is as much historian as he is weaver of suspense ... a rich, enriching series.'
Christian Science Monitor

'In
Catilina's Riddle
the ageing of the main character parallels the maturing of Saylor's talent as a novelist. The plot is richer and more dramatic; the stakes are higher, and the situation in Rome itself more desperate.'
San Francisco Review of Books

'Ancient Rome springs to life, along with a
pater familias
sleuth both endearing and admirable — and no professional slouch.'
The Poisoned Pen

Praise for
A Murder on the Appian Way

'How wonderful to have a scholar write about Ancient Rome; how comforting to feel instant confidence in the historical accuracy of a novel. With effortless grace, Steven Savior's
A Murder on the Appian Way
puts the reader immediately at home in this distant world.'
The Sunday Times

'Wonderfully (and gracefully) researched ... This is entertainment of the first order.'
Lambda Book Report

'The suspense never lags as Saylor spins a sophisticated political thriller that also brings readers up to speed on Roman history.'
Publisher's Weekly

'Mr Saylor puts such great detail and tumultuous life into his scenes that the sensation of rubbing elbows with the ancients is quite uncanny.'
New York Times Book Review

A MURDER ON THE APPIAN WAY

A Mystery of Ancient Rome

First published in the UK by Robinson Publishing Ltd 1997

First published in the USA by St Martins Press 1996

The authors moral right has been asserted.

All rights reserved. This book is sold subject to the condition that it shall not, by way of trade or otherwise, be lent, re-sold, * hired out or otherwise circulated in any form of binding or cover other than that in which it is published and without a similar condition including this condition being imposed on the subsequent purchaser.

Printed in the EC

Men were eager to win office and even employed bribery and assassination to do so, but such was the state of affairs in the city that elections could not be held. With no one in charge, murders occurred practically every day.

The Appian Way, which was made by Appius Claudius Caecus and honours his name, extends from Rome to Capua, a journey of five days. Its breadth is such that two wagons going in opposite directions can easily pass one another. This road is one of the noteworthy sights of the world, for the stones are so finely cut, levelled and fitted together, without mortar of any sort, that the unbroken surface appears to be not a work of man, but a wondrous phenomenon of nature.

The Enchanted Quest by Frewin Jones
SilkenSeduction by Tara Nina
Edge of Nowhere by Michael Ridpath
Unsinkable by Gordon Korman
The Last Letter by Kathleen Shoop
Twelve Days of Christmas by Debbie Macomber
Flee the Night by Warren, Susan May
Doomsday Brethren, Book 04: Entice Me at Twilight by Shayla Black
Unstoppable: Truth is Unstoppable (Truth and Love Series) by Bethany Hensel
Ella Minnow Pea by Mark Dunn
Our partner