Murder on the Hoof: A Mystery (Colleen McCabe Series) 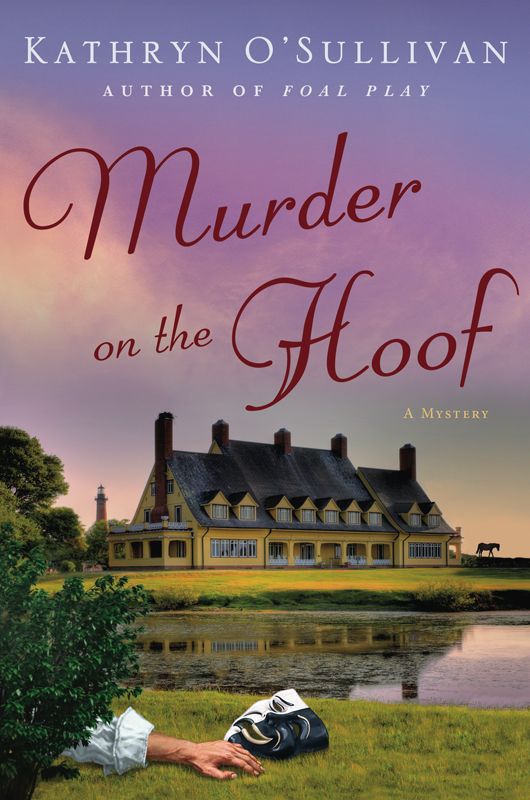 For all those working tirelessly to protect
Corolla’s wild horses

As always,
I couldn’t have written this book without the support and love of numerous people. Thanks to my husband for patiently critiquing this book, cooking me meals to keep me writing, accompanying me on signing and conference trips, and showing his love each and every day; to my father for his helpful feedback and support; to my mother for her enthusiasm and reconnaissance missions; to the rest of my family and childhood friends for attending signings and library events; and to my colleagues at Northern Virginia Community College for encouraging me every step of the way and surprising me at signings.

A very special thanks and deepest gratitude to the amazing team at St. Martin’s Press: my insightful and kind editor, Toni Kirkpatrick, and her assistant, Jennifer Letwack; my hardworking and considerate publicist, Justin Velella; my new publicist, Shailyn Tavella; and my eagle-eyed copy editor, Carol Edwards.

Sincere thanks to my agent, Eleanor Wood, for not only believing in the book, but also in me, and for her wonderful title contribution.

Thanks to Andy Mueller for his beautiful photography of Corolla’s Whalehead Club in Historic Corolla that graces the cover, and to David Rotstein, Executive Art Director at St. Martin’s Press, for reaching out to him.

Sincere thanks to all at the Corolla Wild Horse Fund who are dedicated to protecting the beautiful wild horses depicted in this book. May every reader be inspired to support their work with a donation at
www.corollawildhorses.com
.

Fond thanks to the independent bookstore owners, bloggers, and librarians for hosting me for events, inviting me back for future visits, for carrying my work, and for your love and support of writers everywhere.

Thanks to my playwright friends who have known me from the beginning; my mystery and romance writer friends who have welcomed me into their ranks with encouragement, humor, and support; and my friends in the Web community who have cheered every accomplishment along the way.

Finally, a heartfelt thank-you to the men and women of Corolla Fire and Rescue who inspired me to begin this series and who are more skilled, noble, diverse, and humble than any characters I could write.

Fire chief Colleen McCabe
scrutinized the sea of battered bodies scattered on the beach like shells after high tide. Nearly a dozen of Corolla’s citizens were slumped in the sand. Firefighters and EMTs rushed about the scene, performing first aid on the injured, who groaned in pain and clutched damaged limbs. Other victims lay eerily motionless in the hot morning sun. Sparky, Colleen’s Border collie, paced—one ear up and head cocked—as the rescue team called out vital signs, stabilized neck injuries, and carried individuals to nearby ambulances.

The wounded were familiar to Colleen, active members of the Corolla community, which added to the disturbing nature of the scene. Nellie Byrd, the popular owner of Nell’s Gift Shop and Rentals, slouched at the foot of a dune, clutching her thigh and wincing as Kenny Ward, one of Colleen’s firefighters, carefully examined her ankle.

“A duck and a flea,” Kenny said softly to Nellie.

“Come on, Nell. Twenty-three. A duck and a flea,” he said again, prompting her.

“Thee and me,” she responded with a weak smile.

Kenny was reminding Nellie of their mutual love of the Whalehead Station’s Bingo Night, and Colleen nodded in approval at his ability to establish rapport and keep Nellie calm. Satisfied that Nellie was in good hands, Colleen focused on the rest of her team. One of her men tended to Rita Riddle, a woman in her late fifties and owner of Great Escapes clothing store. Rita sat unusually still as her head and right eye were carefully wrapped with gauze. Other rescuers efficiently applied pressure to wounds, examined victims for concussions, and wrapped those in shock in reflective blankets to keep their body temperature steady and protect them from the sizzling August heat.

Colleen eyed the growing crowd of onlookers. There were now almost two dozen people in bathing suits, shorts, and sun hats gathered at the scene’s perimeter, pointing, whispering, and recording with cell phones. Much to her annoyance, one bystander was tossing popcorn in the air, attracting a flock of squawking seagulls. Colleen was thankful Bill Dorman, her best friend and the Currituck County sheriff, was there to keep the vacationers at a safe distance and informed about the details of the unfolding event. Bill could command a crowd with a single word and a stern expression.

The ocean breeze shifted and carried a gust of humid air and a loud wail over the area. Myrtle Crepe, Colleen’s crabby retired third-grade teacher and head of the Lighthouse Wild Horse Preservation Society, writhed in the sand, with blood oozing from an ugly gash on her forehead. Myrtle gasped, her face the picture of agony, then panted rapidly, moaned once more, and collapsed in a woozy heap.

Colleen watched with apprehension as chubby Bobby Crepe, one of her firefighters in training, crouched next to his mother and attempted to take her pulse. Remaining objective and professional while performing medical treatment on family members was often difficult.

Just then, Myrtle yelped, yanked her wrist away from her son, and bolted upright. “You’re doing it wrong, Little Bobby. Don’t use your thumb!” she barked, all signs of wooziness gone.

“Are you breaking character?” Bobby asked with a tisk and shake of his head.

Myrtle clenched her mouth shut and flumped back in the sand with a resigned huff. Bobby suppressed a grin and took his mother’s wrist again.

“Maybe it wasn’t a good idea having Bobby practice on Myrtle,” Colleen said.

“You wanted him to experience the worst-case scenario,” Bill said with a wink.

She checked the time and signaled Jimmy Bartlett, her well-respected veteran captain.

Jimmy blew a short blast on his whistle. “Okay, everyone, that’s the end of the training exercise,” he called out.

One by one, the wounded citizens rose, smiling and shaking hands with the firefighters and EMTs who had been working on them. The crowd of vacationers clapped and whistled, prompting some of the role players to take a bow. Sparky barked and ran among the “injured,” curiously sniffing the fake bloody wounds. The seagulls screamed at the dispersing crowd and flew away down the beach.

Colleen had had her doubts when it had first been suggested, but Myrtle and her fellow community theater actors had done a fine job playing victims for her firefighter and EMT training session. She had been particularly impressed with the makeup skills of Rich Bailey, the eldest son and funeral director at Bailey and Sons Funeral Services. Rich had created remarkably convincing latex gashes, derma wax broken noses, and oozing contusions. In the past, Colleen had had her team use a moulage kit to craft injuries, but their work was amateurish at best compared to Rich’s. I guess there’s nothing like the makeup skills of a professional mortician, she thought. Rich’s expert makeup techniques, combined with the unpredictability of working with strangers, had proved a more realistic and valuable experience for her team than working on one another.

Nellie removed the bandage from her ankle and waved happily to her nephew, Adam Jones, who was standing nearby, recording the entire exercise. Adam had recently graduated from film school and had been in town for the last month helping Doc Wales, the local equine veterinarian, rewrite
Wild and Free,
a play about the history of the Corolla Spanish mustangs, for the community theater’s and Lighthouse Wild Horse Preservation Society’s upcoming fund-raising production. Nellie had convinced Adam to film the training to help Colleen and her team.

Lane Walker, a handsome gray-haired member of the theater group with a Casanova reputation, straightened his shirt and strode toward Adam. “Would you like an interview, young man?” he asked. It wasn’t so much a question as an authoritative offer.

“Sure,” Adam said, and focused the camera on Lane.

Colleen marveled at how actors seemed to truly enjoy being in the spotlight. She had always been more of a behind-the-scenes person. Yes, as fire chief she was often the focus of attention and could turn on the charm for public events and press conferences, but her natural inclination was one of introversion. If born into a wealthy family, Colleen was certain she would have led a life of lazy solitude, reading books, gardening, and perhaps even learning to play the piano. But she had grown up with hardworking, ambitious parents who had instilled those values in their daughter. When she took more than a day off of work, she felt downright slothful.

Colleen listened to Lane regale Adam about a character he had played on
Red Alert,
a 1970s cop television show, as well as his detailed preparation for today’s role as accident victim.

“Look at him,” said Myrtle in a disapproving voice as she joined Colleen and Bill. “Always the scene stealer.”

“Hmpf. That’s because he flirts with anything in a skirt. Makes me utterly uncomfortable.”

“If Lane’s been troubling you, Myrtle, just say the word and I’ll talk to him,” Bill teased.

“Oh!” Myrtle exclaimed, not appreciating Bill’s joke. “Men,” she added, and marched off toward Nellie.

“What was that about?” Bill asked, genuinely surprised.

“I suspect it has something to do with the play production,” Colleen guessed. “You know Myrtle hates it when anyone challenges her authority. And Lane has professional acting chops, something Myrtle lacks.”

The remaining actors joined Lane to listen to his interview. Among them were Sam Riddle, a retired businessman turned Food Lion employee; his wife, Rita; and Fawn Harkins, a recent college graduate and, at twenty-one years old, the youngest member of the acting troupe.

Several EMTs crowded around Fawn, offering to help carry her over the sand to show off their strength. Colleen watched with concern as one by one her men hoisted a giggling Fawn into the air. The young woman was a natural beauty with a pretty smile, dimpled cheeks, sun-kissed skin, long tresses, and a curvy figure that moved unencumbered beneath her flowing tie-dyed dress. Colleen didn’t begrudge Fawn the attention; she was a vibrant young woman with obvious assets. It was how Fawn had become a source of tension at the station that concerned her.

Fawn was the girlfriend of Chip Reed, one of Colleen’s EMTs. About a month ago at a family and friends station picnic, Chip had caught Fawn flirting with the other men. Colleen had had to step in before it came to blows and had ordered everyone to leave the dramatics to the community theater group. Anything that interfered with her guys working as a team was not only unwelcome; it was dangerous. She was glad Chip was delayed returning to town from visiting a sick relative. He wouldn’t have liked seeing his girlfriend feeling the biceps and quads of his fellow EMTs and firefighters.