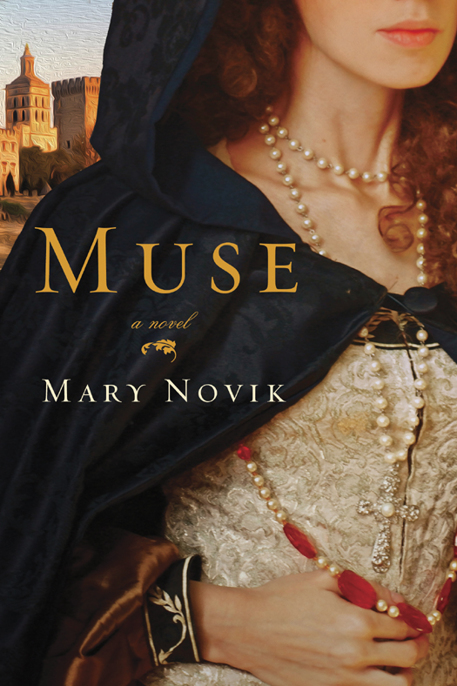 All rights reserved. The use of any part of this publication, reproduced, transmitted in any form or by any means electronic, mechanical, photocopying, recording or otherwise, or stored in a retrieval system without the prior written consent of the publisher—or in the case of photocopying or other reprographic copying, license from the Canadian Copyright Licensing Agency—is an infringement of the copyright law.

Published in Canada by Doubleday Canada, a division of Random House of Canada Limited

I
FIRST HEARD
my mother’s heartbeat from inside her dark, surrounding womb. It mingled with my own heart’s rhythm, then changed to a harsher, more strident beat. It was then that I had my first and most famous vision of a man kneeling in a purple cassock and biretta. I could see him as if I were looking out a window made of glass. He was framed by curtains that fell in crimson folds around my mother, who lay beneath him on the bed. His face was as clear to me as the blood vessels inside her womb, his skin foxed with a tracery of veins. I looked straight into his eyes and they were as hard and blue as lapis lazuli. I kicked with all my might to drive him off.

When I was older and further from my mother’s heartbeat, I told her this vision to bring her close to me. After my grandmother Conmère left to boast about me to the cloth-workers along the canal, my mother picked me up to kiss behind my ear.

“It was the eightieth day of your life, Solange, the day your soul entered your body. You moved inside me, telling me that I was carrying a daughter. This means we will soon have a finer place to live, a bed of
riches in another chamber. Now that the Pope and his men have come to Avignon, Fortune will spin her wheel to raise us up.”

Before long, my mother had a visitor, a priest whose every act was full of kindness and ceremony. After his first visit, he came each week. I would run to him and call him Papa, and would receive three kisses on my cheeks. Then I would unburden his arms of gifts: honey, wax candles, an apple or a plum, the almonds I craved, sometimes a length of cloth or lace. He gave Maman a perfume bottle and a bracelet wrought of silver, with a shank of his hair embedded like a relic.

When the Rhône flooded and the water spilled across the low road beside the canal, Papa arrived with wet shoes, carrying a wooden box under his arm. He let me open the clasp to take out the alphabet letters stacked inside, then spelt words on the hearth for me to read.
Mater
. Maman.
Pater
. Papa. Conmère did not leave her corner that day, but rocked back and forth, crooning oddly.

“What is wrong with her?” Papa asked.

Maman said, “This happens when the canal floods. She thinks the water is rising up to choke her and complains of prickling in her arms and legs.”

“I have prickles also,” I said, but they were paying more attention to each other than to me.

“Perhaps Conmère has second sight like Solange, but lacks the clarity to speak of it,” Papa said. “Your gift is in your face and chestnut hair, but Solange will speak in many tongues. Look how she reaches for the wooden letters! When she is of age, I will give her a dowry so she can enter a great abbey or wed a man of noble birth to have fine sons.”

On All Saints’ Day, Papa did not come as promised. Instead, another priest arrived in a black cassock to announce that Papa had left this world to find a better one. My mother banged on the priest’s chest with her fists and refused to talk or eat all day. After a week our fuel was gone and Conmère walked beyond the cemetery to gather wood. She returned with a faggot of sticks and a sack of coarse flour.

“No more white bread for you,” she said crossly, tying a shawl around me for warmth. “The fire is only for cooking now.”

Our clothes and bed-linen became damp over the winter. When our food ran out, Maman would descend into the tavern to beg food and ale from the drunkards, who followed her upstairs to climb behind the bed-curtains with her. In the spring, Conmère opened the shutters so we could hear the water rushing over the paddlewheels, and not the sound of my mother’s frequent visitors. At night, I slept with Conmère on her paillasse of straw in the corner made fragrant by her herbs and salves, and in the day, I trailed after her along the Sorgue, cutting willow shoots to weave paniers to sell in the market. She told me that her father had been a cloth-dyer with a thriving business where the tavern stood now. The tavern was the Cheval Blanc. The street was the rue du Cheval Blanc. The city was Avignon, the home of the Pope. I was to remember these things if I was separated from her in the busy streets like a lamb torn from the side of a ewe.

Conmère boasted that her name was Le Blanc and that she had once owned the whole building and a milk cow in the shed besides. Most of her stories were dark and wild, told in a tongue that I could scarcely understand. I believed little that she said, least of all that she had owned a cow, but I knew where I lived—at the sign of the white horse along the Sorgue canal. Here, the water spun out of the paddlewheels into the vats where the dyers worked the dye into the cloth, staining their arms and legs dull purple.

At Pentecost, the anniversary of my birth, Conmère kneaded lard and coarse flour into a flatbread, pressed rosemary and salt into the crust, and laid it on the fire-grate. As it baked, she rubbed my legs with fragrant oil, stopping at the birthmark on my thigh. It looked like the chalice I had admired in Notre-Dame-des-Doms, but I knew it wasn’t, because it was too small.

“A thimble. The mark of the cloth-makers, who are your kin and mine.”

She whetted her knife, tested the blade on her thumb, then scored a gentle line, the width of a thread, beside the thimble. I scrambled onto the bed next to Maman to show her the newest mark.

She kissed the beads of blood away. “Another thread to bind you to me. Now, count how old you are.”

I touched a finger to each mark in turn. “Five,” I said, and was rewarded with a chunk of bread.

Boots arrived, a fist beat on the door, and I leapt off the bed as a man came in from the tavern. He spat a mouthful of ale at me and deposited his sloshing flagon on the floor. Then he tugged off his hose, climbed on top of Maman, and jerked the bed-curtains closed. Conmère sat on a stool, carding fleece, her eyes flicking between her spindle and the swinging draperies. At first, the sounds were the usual ones made by male visitors, then Maman begged him to stop, and I became afraid for her. Conmère clapped her wool-cards while I thrashed the draperies with the broom, striking him on the leg.

“Get off my mother,” I ordered.

The knave emerged with a red face. “Having another of your famous visions?” he yelled, wrenching the broom from me. “Who do you see this time? Another bishop? The Pope himself?”

He chased after me, hitting the floor more often than he hit me as I scurried to escape his blows. Conmère kicked his shins, swearing at him in the old tongue until the broom cracked against her skull. As he raised it again, I clasped my hands as though I saw the Virgin before me and chanted the Alma Redemptoris Mater as fast as I could in Latin. I chanted it over and over until he dropped the broom, crossed himself, took a fortifying drink from his flagon, and said, “Get rid of this filthy saint, or else you’ll lose your trade. Hardly any men come up here as it is.”

Maman dove at him with the pointed spindle and it was his turn to scuttle, half-running, half-tumbling down the flight of steps. I threw
his boots and hose after him, sat on the top step, and listened to him spill his tale to the men in the tavern. It pleased him to leave out the spindle and to make much of the little virgin with her gift of tongues to conceal his own cowardice in running from us.

By Michaelmas, my reputation as a prodigy had spread throughout the cloth-makers’ quarter, though truly I was no child wonder but had only learnt some Latin from Papa. By Martinmas, the tavern louts stopped coming upstairs because Maman was with child by one of them. We had no tallow to make soap and candles, and little fuel. When the mistral hurled itself against the oiled cloth windows, we stuffed rags into the shutters and darkness descended in the daylight hours. The smell of meat rose through the floorboards from the tavern’s spit, making me nauseous with hunger. My bones did not grow and Maman, her face pocked and her breath sour, seldom got out of bed.

I lay beside her, spinning Papa’s bracelet around her wrist bone. “Look out the window,” I begged, pulling on her arm. “The moon is red and the water is racing through the paddles.”

“This infant refuses to be born, Solange. Use your gift to look into my womb to see what evil is within me.”

I pressed my eyes against her bare skin, but could not see the child or feel it move. “It is dark as night inside.”

In the morning, Maman’s belly jumped beneath my hand. The bold kick told me it must be a boy. Soon he was battering her with his fists and knees, and Maman clutched her sides with each new spasm. Why would he not come peacefully into the world as I had done? Instead, he tore his way out of her womb in a fury of blood. Conmère caught him as he emerged. Once out, he fell quiet, his flesh curiously blue as Conmère pushed him from my sight. When her poultices could not stanch the river of blood between Maman’s legs, she broke the broom across her knee.

Hate Crime by William Bernhardt
Los enamoramientos by Javier Marías
Beneath the Flesh: They kept all the demons out … except one by Kings, Alex
Bare Bones by Debra Dunbar
Beloved by Antoinette Stockenberg
Dangerous Games by Selene Chardou
Above and Beyond by Riley Morgan
All At Sea by Pepper Ellison
And Blue Skies From Pain by Leicht, Stina
Swan Song by Judith K. Ivie
Our partner