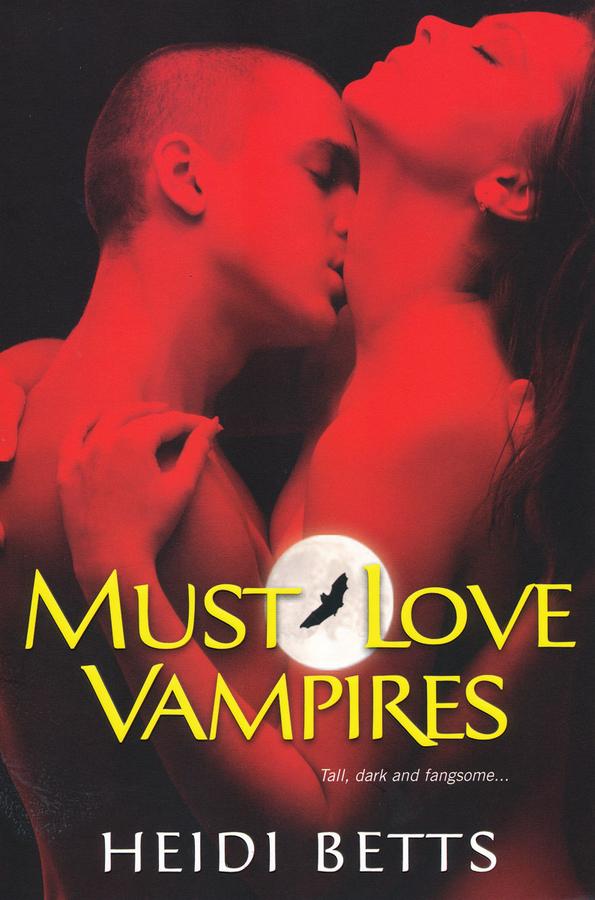 THE BITE BEFORE CHRISTMAS

For my wonderful new editor at Kensington Books,

who is not only a joy to work with

but who has given me the chance

to do something I love (funny, sexy vampires—yippee!)

and put down on paper ideas that I’ve been dying

(ha! pun intended, I guess) to write for a very long time.

Thank you, John, it’s been a pleasure.

Charlotte “Chuck” Lamoreaux stood in the shadows, doing her best to remain invisible. Which wasn’t exactly difficult in the main gaming room of a casino like the Inferno.

All around her, buzzers buzzed, bells rang, and tiny lights in various colors either blazed or blinked, depending on how much cash they were trying to leach from their willing victims. But as bright and flashy as some of the machines were, the rest of the casino was muted. Blood-red carpeting beneath her feet, dark maroon paint and paper on the walls, and the only other illumination coming from low-watt sconces circling the room.

It was all designed to lull visitors into a stupor and keep them at the tables and slot machines as long as possible.
The better to part you from your money, my dear.

And even though ninety percent of the people who walked through the Inferno’s doors knew that, knew the cardinal rule of Vegas—
the house always wins
—it didn’t deter them one iota from copping a squat and squandering away their paychecks, savings accounts, children’s college funds.

Not that Chuck was bitter or anything.

A big, hulking bodyguard made a quarter turn in her direction and she hurriedly spun around, shoving a coin into one of the penny slots she’d been half hiding behind and yanking the one-armed bandit’s one arm.

All right, so maybe she was marginally bitter, but the way she saw it, she had the right. Her father had been a brain-dead zombie of the slots . . . and the roulette wheel . . . and the card tables. He’d even occasionally gotten involved in betting on the dogs and ponies, or putting money down on sporting events like boxing matches and football games. The man had never met a wager he didn’t like or a dime he could hold on to.

No wonder her mother had finally kicked him out—something that had devastated Chuck and her twin sister, Chloe, at the time, but that they now realized was the smartest decision their mother had ever made.

Their father’s gambling was also the reason Chuck made it a policy to spend as little time near the bevy of casinos on The Strip as possible. Chloe, however, had gone in the exact opposite direction, following in their mother’s high-kicking footsteps to become a showgirl. She worked right here for the Inferno’s very own dance review, Lust.

So even though Chuck hated casinos, she still ended up in this one often enough, just to visit her sister. Most nights, she did her best to skirt the gaming rooms and head straight to Lust’s dressing room.

But not tonight. Tonight, she was on a mission, and it very much involved the casino itself.

Or rather, the casino’s elusive owner, Sebastian Raines.

Sebastian Raines was tall, dark, and filthy rich. He owned businesses and properties all over the world, but the Inferno seemed to be his pride and joy. At least judging by the amount of time he spent in Las Vegas, living on the top floor of the hotel in a penthouse suite that apparently took up the
entire
floor. It was also rumored that the place was beyond plush, beyond state of the art . . . it was supposed to be
incredible
.

Of course, that might only be wishful thinking on the part of the local gossip mill, since no one had ever actually seen Sebastian Raines’s private living quarters. No one who’d lived to tell about it, at any rate.

Chuck was determined to be the first.

Raines, dressed to the nines in a dark designer suit and his trademark dark glasses, started moving again. He was making the rounds of some of the tables, something he did sporadically on his way to press the flesh with the high rollers and
really
high rollers in the private rooms at the rear of the main floor.

As usual when he made a public appearance, he was surrounded by an army of black-suited bodyguards who looked as though they downed steroid Big Gulps for breakfast, lunch, and dinner. They were tall and wide and bulging with Hulk-like muscles. But even so, Sebastian Raines stood out above them all by at least three inches.

He might not be as broad in the shoulders or spend quite as much time bench pressing armored vehicles as the members of his entourage did, but he was definitely taller. And handsomer. And more imposing.

Abandoning the penny slot machine she’d been pretending to play for the past several minutes, she followed behind, doing her best to look like just another bunco babe wandering around in her natural habitat.

When Raines—and his trained goons—paused again, she quickly did the same, diving at yet another machine waiting to spin its row of pineapples and coconuts. Quarter slots this time, and she dug into her pocket for the proper change.

She was probably the only person in the place hoping
not
to strike it rich. But even though a nice, fat jackpot would do wonders for her bank account—as well as eliminating her reason for skulking around in the first place—the last thing she needed was bells and whistles and alarms going off, drawing all kinds of unwanted attention when she was trying her best to blend in and go completely unnoticed.

She’d poked around and followed people before on research trips, but never to this extent. Never for a story quite like this one.

Normally, her investigations consisted of interviewing loonies who swore they’d seen Bigfoot, or standing beside a stretch of scorched desert, pretending she believed some lonely Trekkie’s account of being abducted by aliens. It was her job to believe it all . . . and then add even more embellishment in the stories she wrote for the
Sin City Tattler
.

She was actually quite good at it. A childhood spent sitting backstage while her mother did three shows a night had apparently paid off. While her sister had watched the dancers with wide-eyed fascination, Chuck had always had a book with her, as well as notebooks that she’d filled with her own creative ideas.

Writing for the
Tattler
wasn’t exactly her dream job, but it paid the bills. It was also kind of fun. She wasn’t a UFOCHASER or conspiracy theorist herself, but some of the stories she covered—or, yes, invented out of thin air—were highly amusing.

The one she planned to do on Sebastian Raines, though, was her very best idea yet. It was front page material, and if she played her cards right—no pun intended, she thought with a short mental snort as she scampered past a blackjack table to the next bank of slot machines—it might even land her a position at a larger, more prestigious, and
definitely
more respected paper.

Provided she could pull this off.

The first order of business was to follow him, watch his every movement.

The second was to somehow get into his penthouse and see if she could find evidence to support her theory that he was not who—or more to the point,
what
—he claimed to be.

The third was to not get caught . . . which should maybe actually be at the top of the list, since it would probably mean jail time and a nice, fat restraining order, if she did.

And fourth and finally was to prove—
prove
without a shadow of a doubt—that billionaire businessman and casino mogul Sebastian Raines was exactly what she’d begun to suspect months ago.

“Thanks for letting me do this,” Chuck said somewhat breathlessly to her twin sister, Chloe.

“Oh, sweetie, you’re the one doing me the favor,” Chloe replied. “Aidan and I have been trying to get some alone time all week. But you better hope nobody catches on, or we’re both in trouble.”

Chuck wiggled her hips and jiggled her bazooms, feeling for all the world like a marlin on the business end of some deep-sea fisherman’s hook while the two of them struggled to get her into Chloe’s skimpy costume. It was more than skintight. It was the first layer of dermis; the drywall beneath three layers of paint, two layers of wallpaper, and a couple more layers of paint.

It also didn’t help that, even though they were identical twins, Charlotte was just a little bigger on top. Which meant that by the time they managed to squeeze her into the red-and-orange sequined ensemble, designed to look like the fires of Hell, she was ready to pop right back out again.

“Nobody will catch on,” she insisted, sucking in a breath and praying the twins—the
other
twins—would stay put long enough for her to get through the night.

“If they do, we’ll both get fired. You’re sure you know the routine? All of it?”

“Backward, forward, and inside out,” Chuck assured her sister. “We practice together almost every day. You know darn well I could do this in my sleep.”

Chuck was no showgirl, nor did she want to be. But their mother had signed them both up for dance classes almost before they could walk. Ballet, tap, ballroom . . . Charlotte and Chloe had tipped their toes and twisted their hips to just about every type of music in existence. They’d also gone the whole
Toddlers and Tiarasteen beauty queen
college scholarship by way of pageant route, but that wasn’t something Chuck liked to talk—or think—about.

But even though you could take the girl out of the dance class, you couldn’t always take the dance out of the girl. Chloe had followed in their mother’s footsteps—quite literally—by becoming a showgirl, shaking her stuff onstage six nights a week at Lust, and doing her part to keep Vegas’s tourism boom booming. The male faction of it, at any rate.

Chuck, however, only worked through Chloe’s routines with her because it was a great workout. If she didn’t, she would probably never exercise, and her penchant for junk food already made her the bustier, hippier twin. She didn’t need to become the “morbidly obese one” while her sister remained the perpetually “pretty one.”

“If you mess up,” Chloe continued to fret, “tell them you aren’t feeling well. Tell them you have an inner ear infection that’s throwing your balance off.”

“You’ve been saving that one, haven’t you?”

Chloe didn’t blush—they’d been too close all their lives and had gone through too much together to be embarrassed by much of anything. Instead, she cocked her head and flashed a wide grin.

“I won’t need to,” Chuck assured her. “You can still use it to beg off for some hot date.”

Chloe fiddled a bit more with Chuck’s makeup, fluffed the long, orange feathers hanging off her butt and making her look—in Chuck’s opinion, anyway—like a giant rooster, and then reached for the humongous headdress that was the one piece of the costume that gave Chuck pause. The thing weighed a ton, and visions of her neck snapping in half, her skull hanging at a perfect ninety-degree angle, kept flashing through her head.

This entire scheme had been her idea, but that didn’t mean she wanted to spend the rest of her life as a quadriplegic. Not for a story. Not even this story. It was a good one; a make-orbreak, career-building story. She just wasn’t sure it was worth sipping Thanksgiving dinner through a straw.

“With any luck,” Chloe said, oblivious to the squeak of wheelchairs rolling through her sister’s mind, “I won’t have any more hot dates to call in sick for. I think Aidan might be the one.”