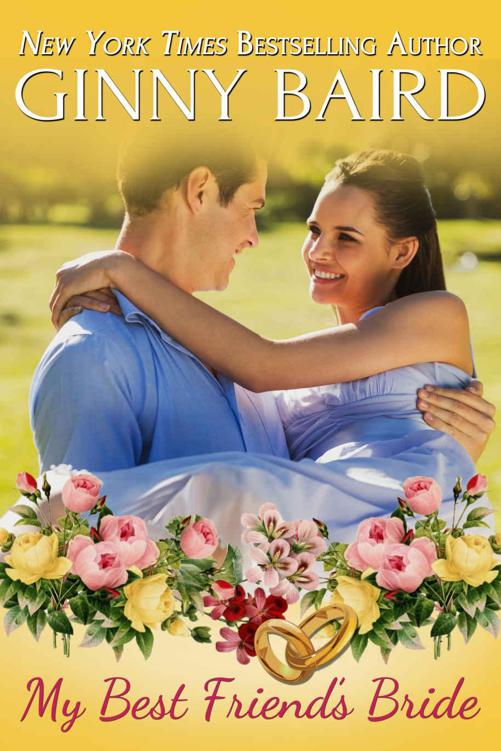 This ebook is licensed for your personal enjoyment only. This ebook may not be resold or given away to other people. If you would like to share this book with another person, please purchase an additional copy for each recipient, unless this book is a participant in a qualified lending program. Thank you for respecting the hard work of this author. To obtain permission to export portions of the text, please contact the author at
[email protected]
.

Characters in this book are fictional and figments of the author’s imagination.

From the time she could talk, romance author Ginny Baird was making up stories, much to the delight—and consternation—of her family and friends. By grade school, she’d turned that inclination into a talent, whereby her teacher allowed her to write and produce plays rather than write boring book reports. Ginny continued writing throughout college, where she contributed articles to her literary campus weekly, then later pursued a career managing international projects with the U.S. State Department.

Ginny has held an assortment of jobs, including schoolteacher, freelance fashion model, and greeting card writer, and has published more than twenty works of fiction and optioned ten screenplays. She has also published short stories, nonfiction, and poetry, and admits to being a true romantic at heart.

When she’s not writing, Ginny enjoys cooking, biking, and spending time with her family in Tidewater, Virginia. She loves hearing from her readers and welcomes visitors to her website at
http://www.ginnybairdromance.com
.

The Ghost Next Door (A Love Story)

The Light at the End of the Road

How to Marry a Matador

Santa Fe Fortune and How to Marry a Matador (Gemini Edition)

Jillian Jamison strode off the tennis court feeling disconcerted. She’d bested Brad at singles, and normally would have relished her victory. The trouble was that Brad hadn’t made it much of a match. Generally, his returns were hard and his serves were fierce. Today, he’d scarcely made an effort. Jill eyed him sideways, wondering what was up.

Brad dabbed his brow with the towel draped around his neck. “Nice job!”

“Hmm, yes.” She bent to tuck her racket into its bag. “Almost amazing.”

Brad shrugged, sweat glistening inside his open collar. He had a nice physique and a muscled chest. Too bad Jill wasn’t drawn to it. That would make things
so much easier.
He grinned and dimples settled on either side of his mouth beneath a mop of sandy-colored hair. “What can I say? You’re a natural.”

Jill smirked. “And you’re a natural-born liar. Okay, Brad. I’ll bite. What are you hiding?”

His face fell in a wounded fashion, but Jill silently called his bluff. She’d known Brad Tate since the second grade, when his family had moved in across the street from hers. They’d gone to grade school together, and had taken swimming and tennis lessons together—right here at this very club. Later, he’d been shipped off to prep school but they’d kept in touch. And now, as fate would have it, they were getting married.
Well, no, not really. Fate’s got nothing to do with it.

“You’re always so suspicious,” he said. “You know I enjoy winning just as much as you do.”

“You’ve just really got your game on today.”

Jill adjusted the headband that swept back her dark bangs and narrowed her eyes.

A grin tickled the edges of his mouth. “Come on, Jilly. Take a compliment.”

“All right. If that’s how you want to play it.”

She was irritated with Brad for about a billion reasons, not the least of which was his throwing this game. Lately, he’d been acting funny. Reticent, almost. Like he was having doubts about going through with it. She started to walk away from him, but he stopped her, laying a hand on her arm. “Okay, all right. You’ve got me,” he admitted. “You and I do need to talk, but not here.”

She studied his eyes, questioning. They stared back at her with compassion and concern. “Let me buy you a drink at the grill.”

Jill checked her watch. “It’s ten in the morning.”

Jill twisted her lips, thinking this must be bad. Worse than bad.

Jill heaved a sigh, deciding she needed to keep her wits about her. “I’ll take coffee. Sounds like I might need a double shot.”

Jill set her cup down so fast it clattered against the saucer. “You want me to
what
?”

Brad leaned forward to hush her. “Jilly, folks are gawking.”

She blinked, spying heads swiveled in her direction. Everyone was dressed in tennis or golf attire. Some
were
already drinking Bloody Marys and mimosas. Now she wished she’d ordered one as well. Maybe one of each!

She was certain she’d misheard him. “About marrying your best friend?”

To her astonishment, Brad nodded.

“But I thought—” Her voice cracked, rising a decibel. She caught herself and continued in a whisper. “I was marrying
you.
”

“Of course, you’re marrying me,” he hissed back. “That’s what we agreed.”

Oh no, now she felt the
but
coming.

Zing!
There it was! Jill bit into her bottom lip.

“Here’s the thing.” He grimaced, apology in his eyes. “It’s Susan.”

“She’s not the one getting married.”

“I guess that’s kind of the point.” He took her hand on the small tabletop. “Hey, you know that I love you.”

Yeah, she loved him too. Just not
like that
. He knew it. She knew it, and both totally agreed. They were practically family, for goodness’ sake. This was all about their deal. “Brad, what are you saying? That you’re not going through with it?” She gasped, grasping the calamity of the situation. “The wedding’s only six weeks away.”

“That’s the great part,” he said. “The invitations haven’t gone out yet.”

“Deposits have been paid.”

“For the caterer and reception, yes. But the date can be changed without losing that money.”

Jill folded her face in her hands. They were in too deep to pull out now. She looked up, meeting Brad’s eyes. “Did you explain it to her? About the circumstances, and how we’ll have separate rooms?”

“Of course. But Jilly, it wasn’t enough.” He dropped his voice back into a whisper. “She freaked when she saw the dress.”

“
The
dress
,
and you in it. Made the society page of the paper.”

Jill’s mind flashed back over the arrangements they’d made with the wedding planner. She’d been so caught up with other preparations, she’d failed to check last Sunday’s edition for the engagement announcement. As far as Jill knew, Brad had briefed his girlfriend, Susan, on their entire agreement. Up until now, she’d been fine with it. It was only for a year, after all, and there was so much at stake. Jill stared at Brad, agape.

“I can’t believe you’re backing out now, and letting me down this way.”

“By having me marry
Hunter Delaney
?” She said the name like it was some sort of disease.

“By offering a solution.”

“The answer is a definite no.”

“You haven’t seen him in a long time.”

“Thank goodness I haven’t had to.”

“Sure he has. Next you’ll be telling me leopards wear stripes.”

“He’s not the guy you remember.”

“Mostly I recall he had a car. With a big backseat.” She gritted her teeth, speaking through them. “He wanted me to get in it.”

“We were seniors in high school!”

“Thanks a whole heck of a lot for the prom date.”

“You were going to go solo.”

“Maybe I should have.”

“He never touched you, you said so.”

She straightened and wrapped her fingers around her coffee cup. “Doesn’t mean he didn’t want to.”

“Lots of boys wanted to,” he told her honestly. “You were one of the hot girls, Jilly. The hot, brainy babes. No one could get next to you. You can’t blame a teenage boy for trying.”

She huffed. “And this is the man you think can live twelve months under the same roof with a formerly
hot and brainy babe
—in separate rooms?”

“Flattery will get you nowhere. At this point, I’m ready to lift this tennis racket off the floor and clobber you.” She grasped the neck of the bag with her right hand. “I trusted you, Brad!”

He flinched and sat back in his chair. “You know I’d do anything for you, Jilly.” He lowered his voice. “Anything but sacrifice my own happiness. When Susan was cool with everything, I thought, okay… But now?” he said, looking downcast. It was clear that Brad didn’t want to disappoint her. Just as it was evident that he couldn’t risk losing Susan. Brad was in a tough spot.

Jill suddenly felt like a heel. But this wasn’t all about her. There was something in it for Brad too. “What about the money?” she asked him. “Your share?”

He slowly shook his head. “It’s not going to mean anything to me without Susan. It was supposed to be for
us
—me and her. A way for us to get started on that dream we’ve always chased.”

Jill sighed, then recited, “Starting a B and B in the San Juan Islands.”

“Yeah, that. Only we can’t on our teacher salaries, and it would take years to save up.” Jill knew Brad came from money, but that he’d never ask his family for help. He still had access to this club only because it was one of his parents’ membership perks. His parents had tried to discourage Brad from going into high-school teaching, hoping his expensive education would pay off in a more lucrative job. They’d never really approved of his decisions, including his romantic interest in Susan Miller, a fellow math teacher at Brad’s school. The only time they’d gotten the tiniest bit excited about his choices was when he’d announced he was marrying bestselling writer and international personality Jillian Jamison. Their pride and admiration lasted as long as it took to explain the marriage was a sham. At that point they reverted to being
extremely disappointed in him.

Endgame (Last Chance Series) by Dee Davis
The Whispers by Lisa Unger
The Lingering Dead by J. N. Duncan
Intercepted by Love: Part Six: A Football Romance (The Quarterback's Heart Book 6) by Ayala, Rachelle
The Rift Walker by Clay Griffith, Susan Griffith
Hillbilly Heart by Billy Ray Cyrus, Todd Gold
Queen of the Conqueror: The Life of Matilda, Wife of William I by Tracy Joanne Borman
Against the Law by Kat Martin
New Contract (Perimeter Defense Book #3) by Michael Atamanov
Requiem for a Slave by Rosemary Rowe
Our partner