My Healer (Bewitched and Bewildered Book 3) 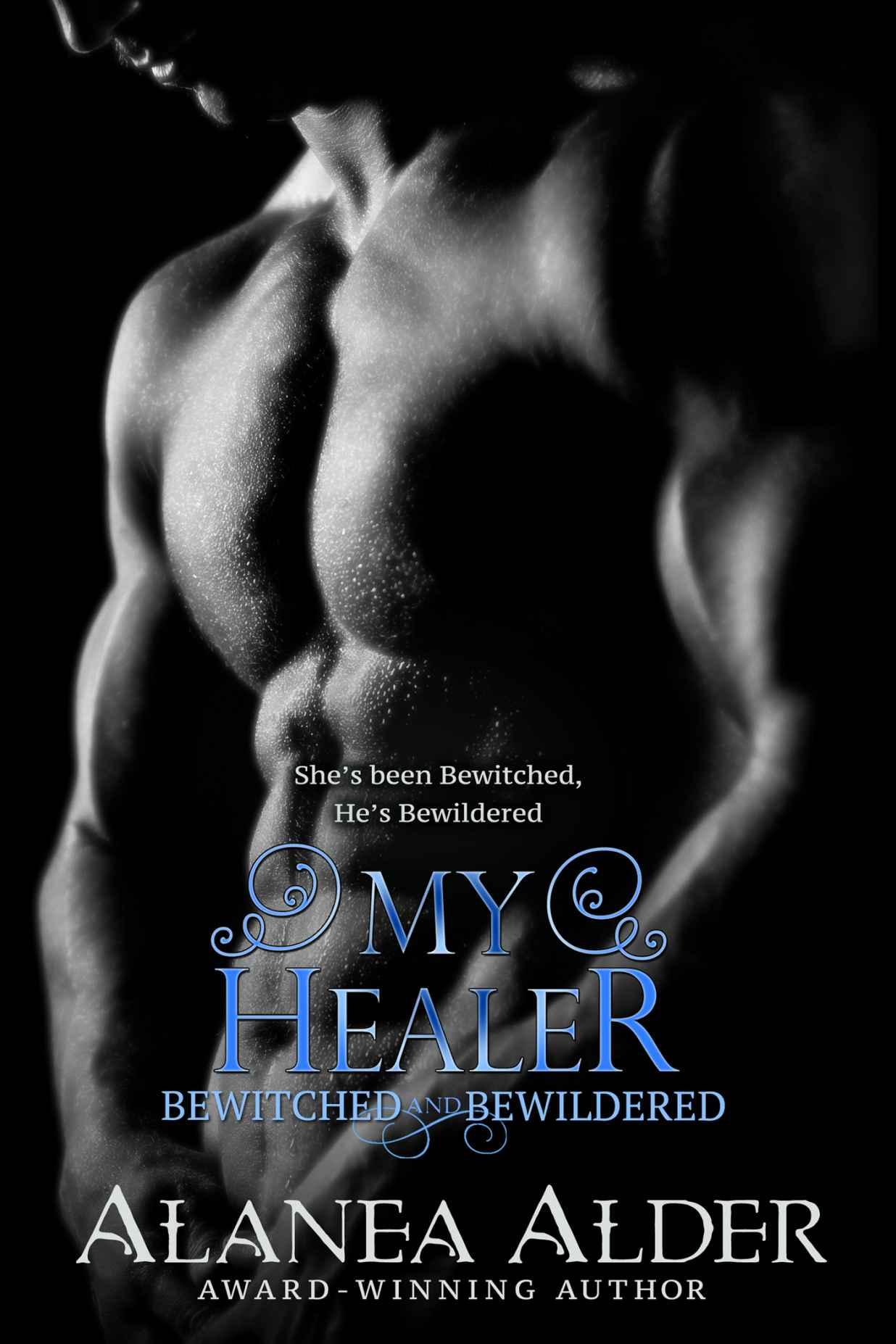 Other Books by Alanea Alder

All rights reserved. No part of this publication may be reproduced, distributed, or transmitted in any form or by any means, including photocopying, recording, or other electronic or mechanical methods, without the prior written permission of the publisher, except in the case of brief quotations embodied in critical reviews and certain other noncommercial uses permitted by copyright law. For permission requests, write to the publisher, addressed "Attention: Permissions Coordinator," at the address below.

This is a work of fiction. Any names, characters, places and incidents are the product of the author's imagination or are used factiously, and any resemblance to actual persons, living or dead, business establishments, events or locales is entirely coincidental.

The scanning, uploading, and distribution of this book via the Internet or via any other means without the permission of the publisher is illegal and punishable by law.

Please purchase only authorized electronic editions, and do not participate in or encourage piracy of copyrighted materials. Your support of the author's rights is appreciated.

Colton growled low, even in his sleep, he couldn't bear to see the fear in his mate's eyes. Unease grew in the pit of his stomach as he watched her pace back and forth in her family room. He watched in terror as the front door was kicked in and ferals rushed in.

"Run! Call for help! Come to Lycaonia!" he yelled.

It didn't matter how loud he shouted, she couldn't hear him. He watched helplessly as one of the ferals stalked closer to his mate, a raised knife in hand, and then ... nothing.

Colton's eyes opened and he stared into the darkness. Groaning he rolled over onto his back. He went over every aspect of the dream, trying to figure out where his mate was. The previous dreams had only involved his mate looking worried or anxious, never before had she been in any physical danger.

He could only pray that she was safe; it was all in Fate's hands now.

Rheia Bradley paced back and forth in front of the large picture window in her family room. Last night's dream had spooked her so badly, she'd asked Radek Carson, one of her oldest friends, to swing by the house. He had taken over as Sheriff when her father retired and always knew how to cheer her up.

She breathed out a sigh of relief when she saw headlights flood her driveway. She walked over to the door and waited, she knew if she simply swung it open without checking to see who there, Radek would never let her hear the end of it. A minute later, there was a knock and she checked the peephole. Sure enough, the bastard had covered it with his thumb.

"Stop wasting time, Radek," she yelled through the door.

"Just checking," was his muffled reply. She opened the door and grinned; Radek hadn't come alone. Beside him were the other members of the paranormal squad that patrolled their small town of Jefferson. Outside the confines of the four paranormal pillar cities, Vanguard squads blended into human first-responder teams. To avoid the issue of seeming ageless, the Vanguard members rotated from city to city, occasionally returning to an active duty status as a Unit Warrior in one of the four pillar cities.

She opened the door wide; Radek walked in and ruffled her hair. Ever since she was a child, she always likened him to his animal. The bear-shifter was huge and barrel-chested. When not in his sheriff's uniform he stayed in jeans and his favorite, worn biker jacket. She always joked with him that if the townspeople saw him riding around on his bike, there would be less crime. She crinkled her nose as he leaned down to kiss her cheek, his scruffy beard was scratchy. Laughing, he kept walking to make room for the others. Behind him the fire marshal, Marco Rodriguez, a jaguar shifter, winked and she blushed. He chuckled and kept walking through to the family room. Marco could make even the old women at the bingo hall feel beautiful. He epitomized Latin good looks and always flirted with her outrageously. To this day, despite the number of years he'd been doing it, he could make her cheeks burn. Levi Sorrel stepped over the threshold and gave her a hug. He was one of the town's police detectives and excelled at complex puzzles. Smiling, the witch handed her a small sachet of lavender and chamomile. Growing up he had taught her about different herbs and their uses; she knew that these two herbs in particular helped to sooth frantic nerves. She squeezed his hand in thanks. Dax Vi'Eaereson followed behind Levi, his huge body filling the doorframe. Dax worked with Marco in the fire department. She'd heard more than one woman around town threaten to set their house on fire to get the two men to save them. Where Marco was dark eyes and lean muscles, Dax was tall, as were all fae, with long golden hair, amber colored eyes and built like a linebacker. Without saying a word, Dax leaned down and kissed her forehead before moving forward. The last of their squad, Athan Durant, a vampire and her girlhood crush, walked in closing the door behind him. He was the squad's only paramedic. His vampire senses and attunement to blood, helped him treat many human injuries and diseases. Athan had borne her girlish infatuation with the grace of a gentleman, neither breaking her heart nor encouraging her. His royal blue eyes smiled at her warmly as he pulled her into a hug. She let herself sag for just a moment, soaking in his strength and support.

"We're here now, honey. Come into the family room so I can visit with my niece and you can tell us what has you so frightened. Then we can kill it and head home." He pulled back and kissed the tip of her nose. Smiling, she let him take her hand and lead her to the family room.

Radek had already scooped up her daughter, Penny, and she was firmly ensconced on his lap. They were playing with Penny's favorite hidden object book. It had been almost a year ago to the day since Penny came into her life. Radek and his team had arrived at the scene of a brutal double homicide and to their shock, found the tiny girl wedged between the wall and the bed. The blankets not only masked her scent but also kept her out of sight. Radek bundled her up and gave her to Athan, so he could bring the child to her. Athan upon arriving at her house, thrust the girl into her arms and said, "She can't go into the system, she's one of us."

Radek told Levi to manipulate the computer systems so that Penny was officially hers, but they all soon discovered, that forging adoption papers had been the easy part. Penny, when found, had been nearly catatonic for the first six months that she'd lived with her. Rheia had tried to balance the needs of a traumatized child with her career as a doctor at the local hospital. When it became evident that Penny needed more care than she was providing, she took a leave of absence. She used the inheritance she received upon the death of her parents to raise her daughter. It saddened her that her parents would never get to meet Penny, but she believed that, in a way, the money they left her was their way of helping their granddaughter.

"Penny, darlin', why don't you go up to your room and arrange your baby dolls so your uncles can see how well you've learned how to clean?" Rheia suggested. Penny was only four; she didn't want her to hear about the nightmare. Penny looked up at her from Radek's lap and stared at her. Without changing expression, the little girl hopped down and walked towards the stairs.

Shaking her head, Rheia reached out and pulled her in for a tight hug. "I know I treat you like a little girl, but guess what, squirt? You are. Let me protect you for as long as I can, yeah?"

When Penny looked up, her eyes softened and her small arms tightened around Rheia's waist. This was as close as she came to a smile. It wasn't much, but it was a dramatic improvement over how non-responsive she'd been when she had first moved in.

Penny let go and headed up the stairs. When Rheia turned to face the room, the men were trying not to grin. "I know, I know! She acts as precocious and surly as I did when I was a child." She walked in and took the seat next to Radek, surprising her adoptive brothers. She only turned to Radek or Dax when she was feeling scared or threatened. Both men were so imposing that she always felt comforted by their presence. Levi was her go-to movie watching buddy. He knew how she took her coffee and what sweets to bring her for a visit. Marco's specialty was revenge served cold. He was a master at the cat and mouse game. The longer his prey suffered psychologically, the better. His sunny disposition hid a vicious nature. True to his animal, either he was purring or lashing out. Athan, however, did not believe in a long drawn out revenge scheme. He would smile, nod, then go out and happily murder anyone who hurt her. The bond they shared ran deep and she knew, there wasn't much the older vampire wouldn't do for her.

Radek wrapped a beefy arm around her shoulder and pulled her close. "Okay, Pumpkin Dumpling, tell big brother Radek what has you so upset."

She took a long shuddering breath. "It's probably nothing, it's just that I can't seem to shake this nightmare. The bone-numbing terror is as fresh in me now as it was in my dream. I can't stop shaking." She held up her trembling hand.

"What happened in the dream?" Levi asked, concern on his face.

"I'm here in the family room, pacing. It's as if I know something bad is going to happen. Suddenly the front door is kicked in and these savage looking men run in. One of the men approaches me, smiling; I can tell he's insane. Just as he raises a knife I hear a man's voice shout and then..." she trailed off.

Radek started to rub up and down on her arm. "I'll tell you what pumpkin, we'll check all the windows and the doors before we leave. I also have a kick bar in my trunk that you can use on the front door to prevent it from being kicked in. Next week we'll install an alarm system that will not only immediately alert the police, but will also page out to us. Does that make you feel better?"

She took a deep breath and nodded. "I think so." She looked around the room and the men were smiling at her. She knew they would do anything to make her feel safe in her childhood home. She'd been their adopted little sister for over twenty years now. She got the feeling, that even when she was old and grey they would still treat her like a child.

Defying the Prophet: A Military Space Opera (The Sentience Trilogy Book 2) by Michaels, Gibson
Raveled by McAneny, Anne
See How Much I Love You by Luis Leante
The Heroic Baron by Nikki Poppen
Blazing Hotter (Love Under Fire Book 2) by Chantel Rhondeau
Jake's Long Shadow by Alan Duff
Moments Lost and Found by Jake, Olivia
Undead at Sundown by McCabe, R.J
The Chocolate Heart by Laura Florand
Intelligence: From Secrets to Policy by Mark M. Lowenthal
Our partner