Read My Heart and Other Black Holes Online

My Heart and Other Black Holes 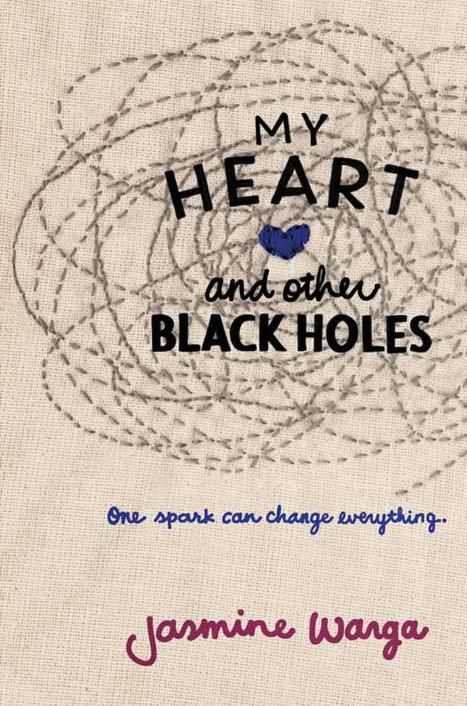 In memory of Aidan Jos Schapera
,
who loved life and taught the rest of us how to

The real voyage of discovery consists not in seeking
new landscapes, but in having new eyes.

M
usic, especially classical music, especially Mozart’s Requiem Mass in D Minor, has kinetic energy. If you listen hard enough, you can hear the violin’s bow trembling above the strings, ready to ignite the notes. To set them in motion. And once the notes are in the air, they collide against one another. They spark. They burst.

I spend a lot of time wondering what dying feels like. What dying sounds like. If I’ll burst like those notes, let out my last cries of pain, and then go silent forever. Or maybe I’ll turn into a shadowy static that’s barely there, if you just listen hard enough.

And if I wasn’t already fantasizing about dying, working at the phone bank at Tucker’s Marketing Concepts would definitely do the trick. Lucky for them they’re off the hook in terms of liability because I have a preexisting condition.

Tucker’s Marketing Concepts is a telemarketing firm located in the basement of a dingy strip mall and I’m their only employee who wasn’t alive to witness the fall of Rome. Several gray plastic tables that were probably bought in bulk from Costco are arranged in rows, and everyone gets a phone and a computer. The whole place smells like mold mixed with burnt coffee.

Right now, we’re conducting a survey for Paradise Vacations. They want to know what people value more on vacation—quality of food and beverage or quality of hotel rooms. I dial the next number on my list: Mrs. Elena George, who lives on Mulberry Street.

“Hello, Mrs. George. My name is Aysel and I’m calling from Tucker’s Marketing Concepts on behalf of Paradise Vacations. Do you have a moment to answer a few questions?” I lack the singsongy delivery of most of my fellow workers. I’m not exactly TMC’s star employee.

“I told y’all to stop calling this number,” Mrs. George says, and hangs up on me.

You can run, but you can’t hide, Mrs. George.
I make a note on my call log. Looks like she’s not interested in a two-week
vacation to Hawaii with a time-share opportunity. Sorry, Paradise Vacations.

Making more than one phone call without a break in between is too much for me, so I turn to face my computer. The only perk of my job is the free, unrestricted internet access. I double click on the browser and log back on to Smooth Passages, my favorite website of the moment.

“Aysel,” Mr. Palmer, my supervisor, snaps, mispronouncing my name as always. It’s Uh-zell, not Ay-zal, but he doesn’t care. “How many times do I have to tell you to stop playing around on your computer?” He gestures toward my call log. “You still have a lot of numbers left.”

Mr. Palmer is the type of person who could change his whole life if he just once went to a different barber. He currently has a bowl cut, the type more typically found on gangly sixth-grade boys. I want to tell him that a crew cut could really bring out his jawline, but I guess he’s pretty happy with Mrs. Palmer so he’s in no rush to reinvent himself. Nope, no midlife crisis for Mr. Palmer.

I hate to admit it, but I’m a little jealous of Mr. Palmer. At least he can be fixed, if he wants to be fixed. A few scissor clips and he’ll be brand-new. There’s nothing that can fix me.

“What?” Mr. Palmer says when he catches me staring at him.

“You have nice hair.” I swivel in my chair. I guess I lied,
my job has two perks: free internet access and I get to sit in a spinning chair.

“You have nice hair,” I repeat. “Have you ever considered wearing it in a different style?”

“You know, I took a risk, hiring you.” He waves his wrinkled finger close to my face. “Everyone in this town told me you were trouble. Because of your . . .” He trails off and looks away.

Because of your father
, I complete his sentence in my head. The inside of my mouth fills with the sour, metallic taste I’ve come to know as humiliation. My life can be neatly divided into two sections: before my father made the nightly news and after. For a moment, I allow myself to imagine what this conversation would sound like if my father weren’t my father. Mr. Palmer probably wouldn’t speak to me like I’m a stray mutt raiding his garbage can. I’d like to think he’d have more tact, but no one wastes their tact on me anymore. But then it hits me, the thought I try to squeeze out of my mind.
You wouldn’t feel any different inside.

I dip my chin to my chest in an attempt to shake that thought. “Sorry, Mr. Palmer. I’m on it.”

Mr. Palmer doesn’t say anything; he just looks up at the three giant shiny banners that were recently hung on the office’s back wall. Each one of them features Brian Jackson striking some sort of pose—arms crossed over his chest, arms
thrown above his head in victory, arms pressed at his side midsprint. He’s been Photoshopped to have perfect skin, but there was no need to alter his ashy-blond hair or bright blue eyes. And I know from passing him in the halls at school that his calf muscles really are that large. At the bottom of each giant banner, the words
HOMEGROWN IN LANGSTON
,
KENTUCKY
,
AND OLYMPIC BOUND
are scrawled in red block text.

The banner doesn’t say anything about the first boy from Langston who almost qualified for the Olympics. But it doesn’t have to. As I watch Mr. Palmer study the banner, I know he’s thinking about that boy—the first boy. Almost anyone who sees Brian Jackson’s sweaty brow and muscular calves can’t help but think of Timothy Jackson, Brian’s older brother. And anyone who sees the banner and then sees me will definitely think of Timothy Jackson.

Finally, Mr. Palmer peels his eyes away from the poster and turns back to me. He can’t look me in the eye, though. He stares over the top of my head as he clears his throat. “Look, Aysel. Maybe it would be best if you didn’t come in tomorrow. Why don’t you take the day off?”

I press my elbows into the table, wishing I could melt into the gray plastic, into an unfeeling synthetic blend of polymers. I feel my skin starting to bruise under the weight of my body and I silently hum Bach’s Toccata and Fugue in D Minor. My mind fills with dark and heavy organ notes and I imagine the organ’s keys arranging themselves into
the shape of a ladder that leads to an empty quiet place. A place away from TMC, away from Mr. Palmer, away from everyone and everything.

Mr. Palmer seems to misinterpret my silence as confusion, not complete and utter mortification. He stretches his hands out in front of him, wringing them out like he just washed them. I inspire that feeling in most people—the desire to wash their hands clean. “As you may know, tomorrow we’re going to be making calls on behalf of the city of Langston to try and increase attendance at Saturday’s rally for Brian Jackson.” Mr. Palmer’s voice quivers a bit and he sneaks a quick glance back at the banner, as if Brian Jackson’s focused athletic countenance may help him muster the courage to continue.

Brian’s magic must rub off on Mr. Palmer because he finds his voice again. “Brian’s coming home for the weekend from training camp and the city wants everyone to show him a warm welcome. And as much as I know you would like to help, I’m afraid some of our customers might feel uncomfortable with you inviting them to the rally because, well, because of your father and . . .” His voice lowers and he continues talking, but he’s stumbling over his words and I can’t really understand what he’s saying. It’s something of a mixture between an apology, an explanation, and an indictment.

I try not to laugh. Instead of focusing on the absurdity of
how I am apparently too unappealing to even operate as a telemarketer, I choose to zero in on Mr. Palmer’s word choice of “customer.” I don’t think the people we harass on the daily consider themselves to be customers, but rather victims. And thanks to my dad, I’m pretty good at making everyone feel like they could be a potential victim.

Red-faced and flustered, Mr. Palmer walks away from my desk and begins strolling the other rows. He asks Marie to stop chewing gum and he begs Tony to please refrain from smearing hamburger grease all over the keyboard.

Once Mr. Palmer’s a safe distance from my desk, I open Smooth Passages again. In the simplest terms, Smooth Passages is a website for people who want to die. There are tons of these websites. Some are fancier than others, some are more niche oriented for people who have a specific method they prefer, like say suffocating, or they’re for a certain type of person, like depressed injured athletes or some shit like that. I still haven’t found one dedicated to the unwanted daughters of psychotic criminals, so for now Smooth Passages is the place for me.

Smooth Passages’ website is plain, no flashy or cheesy HTML work. It’s black and white. Classy. That is, if a website dedicated to suicide can be classy. There are message boards and forums, which is what I mostly look at. Recently, I’ve become really interested in this one section called Suicide Partners.

The problem with suicide, which most people don’t realize, is that it’s really hard to follow through. I know, I know. People are always yammering on and on about how “suicide is the coward’s way out.” And I guess it is—I mean, I am giving up, surrendering. Running away from my black hole of a future, preventing myself from growing into the person I’m terrified of becoming. But just because it’s cowardly doesn’t guarantee it’s going to be easy.

The thing is, I’m concerned that my self-preservation instinct is too high. It’s like my depressed mind and my very-much-alive body are in a constant struggle. I worry about my body winning out at the last minute with some jerky impulse and then I’ll end up having done the deed only halfway.

In the Garden of Beasts by Erik Larson
Longbourn to London by Beutler, Linda
La cacería by Alejandro Paternain
Charmed and Dangerous by Toni McGee Causey
Master of the Opera, Act 1: Passionate Overture by Jeffe Kennedy
While You Were Gone: A Thought I Knew You Novella by Moretti, Kate
Sherlock Holmes and the King's Evil: And Other New Tales Featuring the World's Greatest Detective by Donald Thomas
A Beautiful Rock by Lilliana Anderson
Sevin: Lords of Satyr by Elizabeth Amber
The Cellar: A Post-Apocalyptic Novella by Cruz, Richard Dela
Our partner