Read My Next Step Online 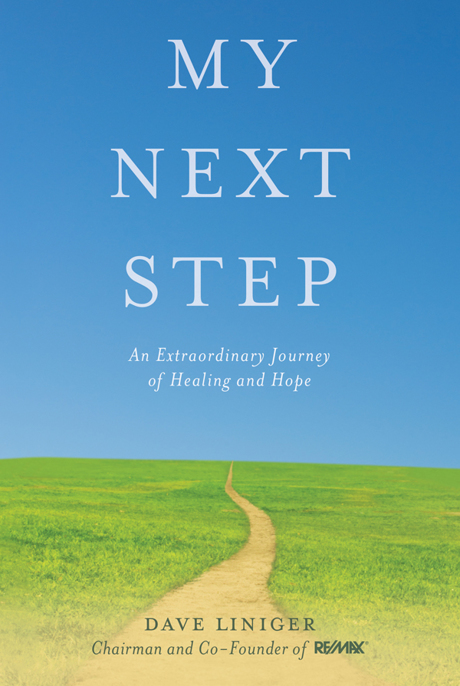 An Extraordinary Journey
of Healing and Hope

This book is dedicated to all those who are facing a major challenge and need to pick up the pieces and start over.

If my personal experience taught me anything, it’s that each of us, with the help of others, can find a way to accept our circumstances, face the future, do what’s necessary, and return to a meaningful life.

The courage to do that is within us all.

Published and distributed in the United States by:
Hay House, Inc.:
www.hayhouse.com
Distributed in Canada by: Raincoast:
www.raincoast.com

All rights reserved. No part of this book may be reproduced by any mechanical, photographic, or electronic process, or in the form of a phonographic recording; nor may it be stored in a retrieval system, transmitted, or otherwise be copied for public or private use—other than for “fair use” as brief quotations embodied in articles and reviews—without prior written permission of the publisher.

My Next Step
is a work of nonfiction. The dialogue is based on the recollections of Dave Liniger and others, and may not match the exact language exchanged at the time. The same is true for the narrative, which is based on recall and may contain errors.

CHAPTER 2
Leave No Man Behind

CHAPTER 10
My Next Step

I
was at the 35
th
annual RE/MAX of Texas Statewide Convention in Galveston on January 28, 2012, to deliver a speech forecasting housing-industry trends. It was supposed to be a quick stop before heading to Boca Raton for a regional owners meeting the next day. My wife Gail was in Orlando buying golf wear and other merchandise for the pro shop at Sanctuary, the private golf club we own in Colorado. She and I had planned to meet up in Florida as soon as I was done in Galveston.

Margaret Kelly, the CEO of RE/MAX, who has been with the company more than twenty-five years, was traveling with me. She was there to speak at the same event.

Gail and I founded RE/MAX in 1973 with the simple notion of giving the very best real estate agents a full slate of support services and one hundred percent of the commission they earned instead of the fifty-fifty split they usually retained at the time. The idea was to build a company where great people could pull together to do great things. At the time, every leader in the industry told me my business platform would never work—that the financial model defied how things were done. They warned me I’d be driven out of the business before I could ever get it off the ground—that the company would
never
survive.

Fortunately, I wasn’t the kind of man who was afraid to roll up my sleeves and do whatever it took to create my own success. Hard work didn’t scare me any more than my critics did. No job was beneath me, especially in the early years. I spent plenty of long nights stuffing envelopes, polishing presentations and hand-folding thousands of flyers. I look back at those grass-roots beginnings and smile at the memory of my fearlessness to face any challenge that came my way. It wasn’t easy, as there were lots of challenges over the years. You see, when you’ve worked in real estate as long as I have, you know that the business is full of cycles. Some years are up, others down. The good and the great among us are separated by how we navigate the lean years—and believe me, there were many times along the way when I didn’t know how we’d make payroll, let alone how I’d put food on the table for my own family.

Forty years later though, RE/MAX is the world’s most productive real estate sales force, with roughly 90,000 agents and 6,300 offices in over 85 countries. At our peak, we had more than 100,000 agents. Our agent count dropped to roughly 85,000 during the economic downturn, but it’s once again on the upswing. I look forward to having a big party when we reach the 100,000-agent milestone for the second time, as I know we will. Nothing makes me happier than having fun with my friends and colleagues—just like the many good times I’ve already enjoyed with them throughout our careers.

Although the real estate market took a heavy hit when the housing crisis occurred back in 2007, we persevered and found a way to navigate our way through those murky and tumultuous times. I saw the writing on the wall early enough to become instrumental in advising key players in the U.S. Treasury Department and the U.S. Department of Housing and Urban Development, recommending procedures that helped streamline the “short sale” process for distressed properties, a broadly recognized drag on the housing industry and national economy as a whole. Doing this firmly established RE/MAX as the “go to” company for those in need, keeping our business flowing and inventory moving. I don’t worry about making ends meet as much as I used to, but I still spend many days and nights wondering about and calculating each careful next step, because you never know where life will lead you.

Just before leaving for Texas on that winter day, I felt as if my back was on the verge of giving out again. I’d been having terrible back problems since April 2010. My doctors had told me that some of my pain was due to being a little heavy for my frame and some of it was due to how I had treated my body over the years. Although I love to play golf, the reality is I’m not very good at it. Twisting my body to swing a club hadn’t helped my back issues any more than all of the daredevil stunts I’d participated in for years. I’ve always considered myself to be a really tough son of a bitch and admittedly went out of my way to prove it to the world. In 1998, I trained with a team of NASA experts in the hope of sailing a specially designed and highly technologically advanced helium balloon around the world. Although we didn’t make it, we sure had fun trying! As an auto-racing enthusiast, I had also completed the twenty-four hour sports car endurance race at Daytona, subjecting my body to as many as four G’s around every turn along the way. I’d parachuted out of planes and faced down near-certain death on my more than 35 big game hunts in Africa and other exotic locations around the world. Some might call that need for adventure crazy—I simply called it fun.

But when my back problems became unbearable, I went to see Dr. Chad J. Prusmack, a local neurosurgeon in Denver, the city I’ve called home for most of my life. I knew of him because two of my officers at RE/MAX had seen him for their ailments, and because he had a terrific reputation.

When I first met Dr. Prusmack, I was surprised by how young, handsome and physically fit he is. I wanted to hate him for his good looks, but instead I admired how smart he was and took comfort in knowing that I would be in good hands if I ever needed his services. When we met in 2010, he showed me that my L5, L6 and S1 vertebrae, located at the bottom of the tailbone, had become arthritic and worn out. Dr. Prusmack explained that I had pounded the hell out of them during the years with all of the crazy and daring things I’d done to abuse my back.

“At some point, Dave, we will have to go in and work on those,” he said.

Because I didn’t get a sense of urgency from him, I dismissed the suggestion, thinking privately,
these doctors usually get paid to cut
. I surely wasn’t ready to go under the knife anytime soon and it was so refreshing to meet a doctor who didn’t want to put me through a surgery until it was absolutely necessary. That really earned my respect.

“Dave, I don’t want to operate if we don’t have to,” he assured me. “We might be able to put it off for another year or two by giving you steroid shots in your spine to control the pain.”

That was just fine with me.

Dr. Prusmack set me up with his hospital’s pain center right away. The procedure was quick and easy. I was given a sedative, hooked up to an IV to repress the pain and was then given multiple shots to my spine. While the first round helped me feel about eighty percent better, there were still times when I was really suffering. This routine continued every couple of months during the next two years as a way of reducing and managing the distress I was feeling and to help me keep moving at my usual lightning-speed pace without missing a step. The last time I went into the pain center to have the shots I was feeling especially tough. I stupidly told the doctor that I didn’t want the sedatives he usually administered. He looked at me like I was nuts.

“I have a high threshold for pain,” I said with tremendous bravado, insisting that he just give me the shot to my spine.

I was wrong about that.
Very
wrong.

I was in agony for at least five minutes. It felt as if an electric shock was shooting straight down from my back to my left leg. It was as if I had touched a live spark plug. Not fun at all, and certainly not recommended!

“C’mon, tough guy…” the doctor coaxed until the excruciating stinging in my back finally subsided to a tolerable, but still uncomfortable, level. Once the throbbing stopped, I was completely pain free—not only had the burn from the shot eased, but my constant back pain had gone away too. The funny thing about back pain is that most people learn to live with it. Only after it’s gone do you realize how much pain you were actually in. For the first time in two years, I felt great.

From that day on, I went about my life as usual. At my doctor’s suggestion, I started to do some back-stretches in the morning to help keep my body limber and even lifted weights to sustain my physique and strength. As a precaution, I carried my medical records in my briefcase everywhere I went just in case anything happened while I was on the road. All I’d have to do in that event is hand the file to the attending physicians in the emergency room and they’d immediately know what we were dealing with. I remained well prepared, did all of the things I was supposed to do, and never looked back—that is, until my trip to Galveston.

Back by Norah McClintock
Radiant by Gardner, James Alan
The Blood Order (Fanghunters Book Two) by Leo Romero
Dark Prophecy by Anthony E. Zuiker
Peggy Sue (The T'aafhal Inheritance) by Hoffman, Doug
There Must Be Some Mistake by Frederick Barthelme
Swimming at Night: A Novel by Clarke, Lucy
Endure by Carrie Jones
The Disenchanted Widow by Christina McKenna
A Gift to Remember by Melissa Hill
Our partner