Read My Soul to Keep Online

My Soul to Keep 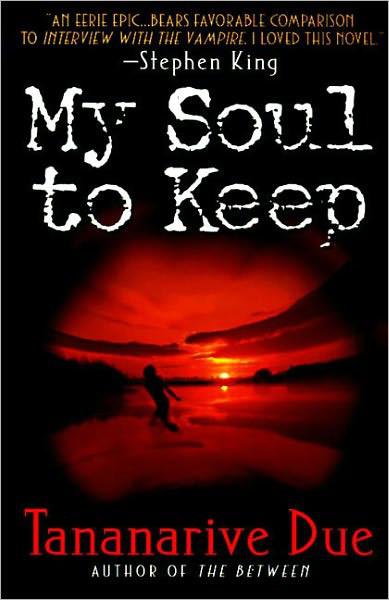 My Soul to Keep
Tananarive Due
Dedication

For my father,
John Dorsey Due Jr.
I love you

Though his steps are not silent, no one hears the…

A low howl filled the two-story house, bleeding from the…

Jessica had filed her story with her editors before leaving…

If someone had told Jessica Jacobs, at twenty, that she…

Once again, he had killed.

David’s bum mark had vanished by Sunday, less than a…

“Your man is tripping, Jessica.”

Even now, alone, Dawit knew he was being watched.

Two men on horseback gallop away from the colorful tents…

“Her name is Rosalie Tillis Banks. The nursing-home lady. I…

Dawit didn’t make the decision right away. And when it…

At the start of her fourth month carrying Kira, in…

In the shadows, five figures stumble noisily in the stairwell…

“Like this, Daddy?” Kira asked, stirring a wooden spoon in…

One Sunday Jessica decided, with unexpected resolve, that she would…

William Emmet Gillis had seen many things in his eighty…

“It wasn’t his heart or another stroke. From what we…

Trees, whenever he contemplated them, reminded Dawit of Adele.

“David, wake up, honey. Look who stopped by.”

Jessica wasn’t sure how long David had been behind her…

The music arrested Dawit’s attention, making him pause his fingers above…

It was a beautiful night, with a bright moon reflecting…

Soon after David drove past the campus of Florida International…

Their lovemaking steered between moments of tenderness—with David above…

Jessica was startled by the sound of a fanatical woman’s…

After the night Raymond Jacobs never came home from Burger…

Kira had never been afraid of the man in the…

Lately, Jessica noticed in church, her mother was wearing pastel…

As soon as he heard the mailbox clank outside his Biscayne…

Jessica tapped on the door frame of her boss’s office.

Mahmoud drew his curtains, blotting out the infernal midday sun.

The white glow from the television set bounced off the…

Alexis Jacobs felt at peace. Lord knew she deserved it.

“You’re crazy,” Sy said, standing over Jessica’s shoulder at her…

“Well, I’ll tell you one thing. I don’t care what…

“Hi. You have reached Fernando Reyes with the Miami Police…

Something was troubling the woman. Something new, beyond the hospitalization…

He was standing behind the screen in the open doorway…

Dawit believed he would go mad in the silence.

Jessica didn’t allow herself to stop—except to pay a…

An unremarkable white Ford sedan pulled into the lot of…

Miami International Airport, a city in itself, was alive tonight.

Just as Jessica was beginning to wonder if there was…

Dawit drove thirty miles before he turned on his blinker…

Teacake was dying. It was the last absurdity.

From somewhere, there was light.

Lou Reed’s hearing wasn’t the greatest, but his olfactory senses…

All difficulty is relative, Dawit realized. His labors as a…

There were a host of reasons Alexis Jacobs was dying…

“Here’s an obscure one that goes way back for you…

Kira didn’t know how she’d gotten there, but she realized…

For a day and a half, the entire time Jessica Jacobs-Wolde…

The driver didn’t need directions. As soon as Dawit showed him…

As soon as Jessica heard the irregular clump-clump on the…

Other Books by Tananarive Due

Though his steps are not silent, no one hears the man walking down the darkened wing of Windsong Nursing Home in Chicago, his heavy soles echoing across the polished vinyl. His walk has the unhurried confidence of an administrator making his rounds, but since it is after nine o’clock, all of the administrators left hours ago, throwing on their coats and bracing their shoulders against Lake Michigan’s unrelenting winds. Tonight’s staff is small because of the snowstorm, which prompted some of the night nurses to call in sick. The man is alone in the wing.

He looks for 11-B uninterrupted, absently tapping each closed door with a leather-gloved hand as he passes. The halls are painted in shades of cheery peach and gold; the colors are an obvious attempt to brighten the silent, fading spirits hidden behind the doors. Inspirational posters line the walls, one picturing new daylight peeking behind a snow-dusted mountain range: T
OMORROW
, T
HERE
I
S
A
NOTHER
S
UNRISE
.

He knows where to find the old woman because he asked for her room number at the reception desk earlier that day. He pauses before touching the doorknob, as though he expects someone to challenge him, but the only sound is the whir of the central heating system. He slips inside. The glow of a fluorescent light carelessly left on in the bathroom makes the room look frozen. The walls are bare. The only evidence of human occupation is a slight form shrouded beneath the sheets in the bed closest to him. The other bed, luckily, is empty.

The old woman’s head snaps toward him when she sees his exaggerated shadow on the wall. He stands above the bed and can make out the lines that wrinkles have drawn across her face, the dryness of her lips, her sunken eyes surrounded by discolored skin. His stomach clenches and sinks.

Without meaning to, he says her name aloud. “Rosalie.”

He knew she’d turned eighty on her last birthday, but he wasn’t expecting this. Her face is a mask crumpled against the arcs of her hidden bones. Her white hair is so thin, it is nearly gone. And the backs of her hands … splotched and defaced by age. He is nearly forced to look away, his aversion to her appearance is so strong. He realizes her illness has done this to her, eating away at her insides until only this shell remains. She must weigh next to nothing; if he wanted to, he could lift her without straining himself and carry her in his arms into the night.

He must struggle to remember how she looked before, honey-complexioned and bright-cheeked. His eyes run over with tears. It is unconscionable that he has waited this long to come to her, his own flesh. Death, he decides, will be her friend.

Her eyes widen as she stares at his uncorrupted youth, the face of a thirty-year-old. Her moistureless lips tremble violently as she tries to speak. “You came,” she says in a hoarse shadow of a voice. “We’ve been waiting. Folks tried to tell us you’d run off for good, but me and Rufus are waiting.”

Rufus has been dead at least ten years, of congestive heart failure. He knows this because he saw the obituary while combing through the pages of the Trib in his ritualized search for familiar names among its pages. Rufus’s was not the first he’d chanced upon, but seeing it had shocked him more than any other. His only consolation had been reading that Rufus had a survivor, his sister, Rosalie Tillis Banks of Chicago. Only then did he realize that Rosalie was still alive, that she had no one left except him.

What fanciful notion compelled him to call the Chicago operator to ask for Rosalie’s telephone number now, after so long? Only to have it? No, of course not. He’d felt an overpowering need to hear her voice on the telephone, if only one or two syllables. But he’d waited nearly too long, confirmed the man who answered Rosalie’s line. The old black woman who’d lived in the house before him was very sick, he said, and she’d moved to a nursing home. A day’s searching brought him to her. Rosalie. She has seen his face, and she is receiving him with joy, nothing else. Rosalie must be living in her own world of delicate daydreams, where reality and imagination swap stories, he thinks. No wonder she doesn’t have the sense to be afraid of him. Maybe, in her mind, he has come for her many times before.

“You know I couldn’t leave you, Rosalie,” he says, taking her frail hand into his. He shudders to touch her, repulsed and saddened when his fingers meet her sagging, unnatural flesh. This will not do for her, not at all. Not for Rosalie. This is only mockery of a human form!

For a precious few minutes, they speak about Chicago, State Street, the music that always filled the house. The piano and clarinet, his toys. Rosalie’s giggles over the piano keys. He remembers Rufus and his temper tantrums. He imagines he can hear Christina’s voice, straining for patience. All times from before, not long past. Everything she says makes his heart wring with old thoughts, forgotten regrets threatening to smother him. She sounds almost the way she did then, her voice rising with wonder as she stares, unblinkingly, into his face. She does not ask the first question about where he has been or how he has found her.

Finally, he sees her exhaustion as her eyes flit closed from time to time, so he says it is time for him to go. She clings to his hand tightly, clawlike, the way a child would.

“I have to do something, Rosalie,” he says, leaning close. Even her scent, he notices, is unfamiliar to him. Time has made her a stranger in nearly every way. The countless reminders of what is different about her, what is ruined forever, make him tremble beside her.

His teeth are locked tightly, hurting, as he walks to the neighboring bed to grasp the fresh white pillow. Now, all of his head hurts. When he walked into this room, all he’d anticipated was a secret visit while she slept. Not this. Not an unretractable impulse. But isn’t this precisely what the word mercy was crafted to explain?

He stands over Rosalie for a moment, cradling the pillow against his abdomen. Is it possible that this lump of living remains is the same that fit easily into her favorite red gingham dress, the one she wears in his memories? Is Rosalie’s essence preserved somewhere here still?

He blocks those thoughts. He cannot doubt what he must do. “Rest, Rosalie.”

He can barely hear the parting whisper from her tattered larynx. “Goodbye, Daddy,” she says.

The Tycoon's Defiant Southern Belle by Elizabeth Lennox
The Totems of Abydos by John Norman
Blue Labyrinth by Douglas Preston, Lincoln Child
Still Water by Stuart Harrison
Tales of the Unquiet Gods by David Pascoe
EMPTY SECRETS (A Back Down Devil MC Novella) by Casey, London, James, Karolyn
Now You See Me by Kris Fletcher
What A Gentleman Wants by Linden, Caroline
The Promise of the Child by Tom Toner
The Further Investigations of Joanne Kilbourn by Gail Bowen
Our partner